What is the Removu S1?

While electronic image stabilisation is now a feature of the GoPro Hero 5 Black, it’s still not a match for mechanical stabilisation. That’s where a gimbal like the Removu S1 comes in.

The Removu S1 is a 3-axis gimbal that will help you get rock-steady footage from your GoPro. It’s compatible with the GoPro Hero 3/3+, Hero 4, Hero 5 and Session models using different housing options. You’re also free to mount the Removu S1 without its grip, meaning you can have stabilised footage even when helmet- or chest-mounted.

Giving it the edge over GoPro’s own Karma Grip is a detachable Bluetooth remote control, a rain-proof design and support for removable batteries. It’s not a completely smooth ride, however. Distracting motor noise – at least when paired with a Hero 5 Black – can be an issue, and follow modes can be a little slow, but overall the Removu S1 is a decent gimbal.

The Removu S1 is a robust and solid gimbal, weighing a little more than the GoPro Karma Grip but feeling reassuringly sturdy. Most of that weight is in the motorised head that has the 3-axis stabilisation as well as housing the mode controls and a small display.

You’ll need to buy the correct model for your GoPro Hero camera, as there are two configurations available – one with a mount for the Hero 3/3+ and Hero 4 (€379), or another configuration that adds a Hero 5 Black mount as well (€389). 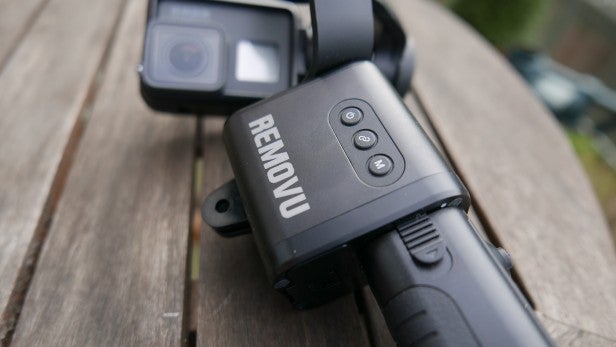 Both configurations also include a compatible mount for the cubed Hero Session cameras. There are also various housing options thrown in, as well as a handy hard case for storing everything. You can buy the Hero 5 Black mount separately should you end up upgrading your GoPro, too.

The S1 breaks down into three component parts: the hand grip, the motorised gimbal head and the GoPro housing, and all of the parts lock into place easily with a twist lock. The hand grip is a little squared off for my liking and doesn’t quite conform to your hand as ergonomically as the Karma Grip does. 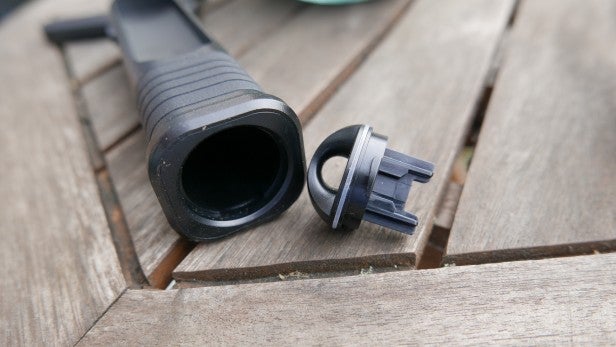 In a nice touch, the base of the grip can be removed and you’ll find somewhere you can stow spare microSD cards. Considering how easy they are to lose, this is most welcome.

The wireless Bluetooth remote control attaches to the grip and can be easily popped out by pressing on the bottom edge. It’s perhaps a little too easy to pop it out, though. On the remote is a joystick for adjusting the camera angle and changing shooting modes, which is going to be particularly useful if you mount the S1 out of the way, such as on a helmet. 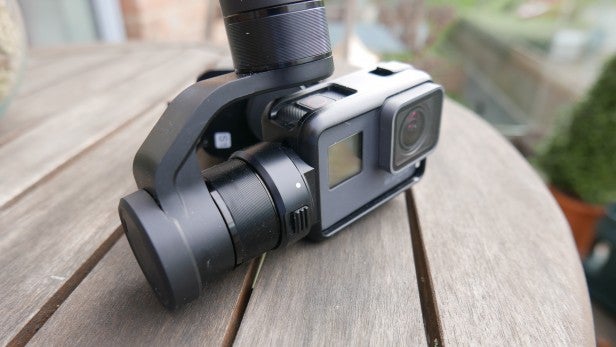 Unfortunately, there’s no option to invert the horizontal or vertical axis controls. I found the vertical adjustment worked the opposite of what felt natural to me but, like the controls for first-person video games, this might be a personal thing.

There are separate power buttons on the remote and gimbal, which you’ll need to turn on separately. You’ll also need to manually power on your GoPro, too. Having three things to power up when shooting can be a little fiddly and is less elegant than when using the Karma Grip, which can automatically power up a connected GoPro. You’ll also need to hit the record button directly on your GoPro (or use your voice if using a Hero 5 model), as the remote can’t do this.

As mentioned, the motorised gimbal can either be attached to the grip or used alone with a standard GoPro mount. This will let you attach GoPro mounts, such as the adhesive options, to mount the camera onto helmets and the like. As the gimbal is reasonably heavy, it’s definitely something you feel the weight of if head-worn. 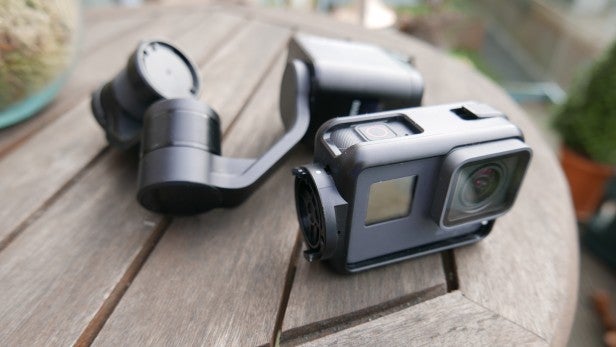 Using either the controls on the gimbal or wireless remote, you can toggle between Pan, Follow or Locked modes. The first will keep a stable horizon and only rotate on the horizontal axis, whereas Follow will also tilt vertically. The latter keeps a fixed viewpoint, as you’d expect.

All modes resulted in some super-steady footage, even when walking, which can be particularly tricky to stabilise. I did, however, find the Follow mode slow to respond. There’s a distinct lag in attempting to aim the camera elsewhere and the gimbal responding. The motor is also slow when manually adjusting the angle using the remote control.

Supposedly, the speed is something Removu is looking to improve with firmware updates, but as it stands it was something I found myself slightly wrestling with.

You can also use the S1 inverted for low-angle shots. If using the Pan mode, you’ll need to hold the S1 upside down and then manually rotate your camera by hand. You’re slightly limited when shooting upside down, though, as the S1 can end up in your shots if you’re not careful.

Motor noise was the biggest issue, however. I was testing with GoPro’s latest Hero 5 Black model, which has the dual microphones for improved audio. These picked up the sound of the gimbal’s motor very clearly, even though to my ear the motor wasn’t that loud. I imagine this is exacerbated by the sound of the motor’s vibrations carrying through the housing to the GoPro’s more sensitive microphones.

At first when watching back outdoor footage, I thought maybe it was wind noise I hadn’t noticed even though it was a calm day. But, having tested again indoors, it’s definitely a result of the motors.

Follow mode. Notice the slow pans and the motor noise

In fairness, the sound issue was slightly alleviated when I used the optional counterweight that’s included in the box. The user guide made no mention of actually needing to use it with the Hero 5 Black, though, only when using the rain-proof covers. You’ll need to put the gimbal into its BacPac mode to take into account the extra weight. 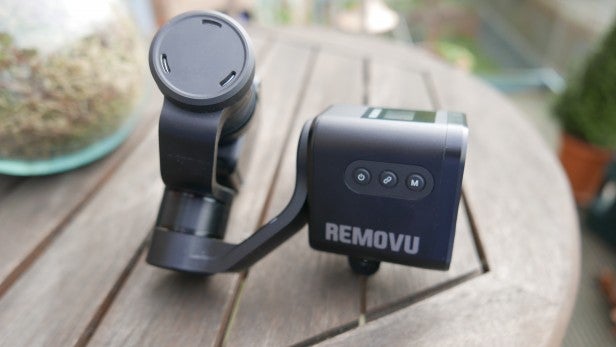 The counterweight attaches to the outside of the gimbal and helps not only balance everything, but also to dampen the vibrations. But even with this attached, the motor noise was still an issue, which is a real shame. I didn’t have an older GoPro model to test it with, but the motor noise issue might be less of a problem with those cameras. 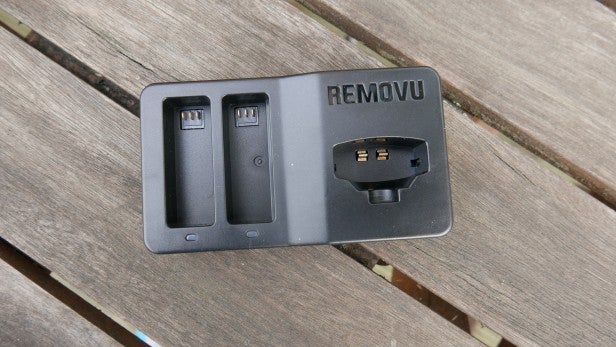 The motorised head has the battery compartment. You’ll need to remove the battery and charge it in a separate cradle, which can also be used to charge the included wireless remote control just by sliding the whole thing in.

Having the option to buy spare batteries will be useful for those out on longer shoots with each battery lasting around three hours. The charging cradle has a Micro USB connection.

Should I buy the Removu S1? 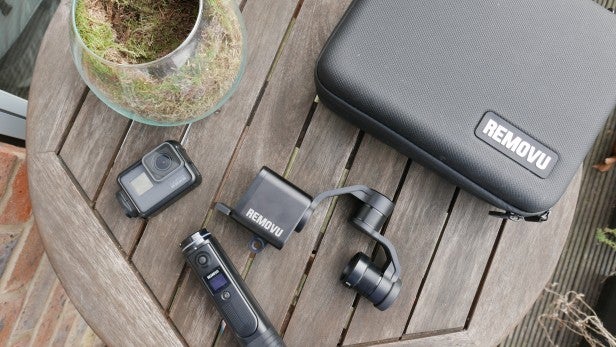 The Removu S1 is a very versatile gimbal and one-ups the Karma Grip thanks to a removable battery and wireless remote control – both features that can prove very useful when out in the field.

However, at least when shooting with a Hero 5 Black, the motor noise lets it down. The at-present slow follow mode is also a shame, and the experience can feel a little clunky when compared to the GoPro Karma Grip. Still, there’s no doubting that the Removu S1 can help capture some seriously slick footage, even if it isn’t perfect.

A future firmware update might tackle two of my biggest complaints, but as it stands the Removu S1 is sadly flawed.

The Removu S1 delivers super-smooth footage, but motor-noise issues let it down.