For most people, this is all the turntable they could ever need. While t isn't as visually striking as the Pro-Ject RPM 3 Carbon, but it does everything else so right. The only real caveat is if you swap between 33s and 45s a lot, you'll likely need to budget for the optional TT-PSU power supply. That’s a significant sum, but could be worth it for the added convenience.

What is the Rega Planar 3?

In the world of hi-fi, Rega is legendary for its turntables, and the Planar 3 possibly most of all. In recent years, this iconic mid-level deck has gone under the name of “RP3”, but for 2016 it’s been re-engineered and made a comeback as the Planar 3.

Rega claims the new Planar 3 has only two components in common with the previous RP3 model, and headlining the new features is its upgraded RB330 tonearm.

The Planar 3 is really rather attractive in the flesh. The glossy plinth, which is available in black or white, is impeccably finished and set off nicely by the metallic upper brace that runs diagonally from the main bearing to the arm mount.

This is a belt-driven turntable that uses a sub-platter, upon which the 12mm-thick glass platter sits, topped by a simple felt mat. The drive belt connects the sub-platter to the motor pulley, which is stepped for 33rpm and 45rpm. 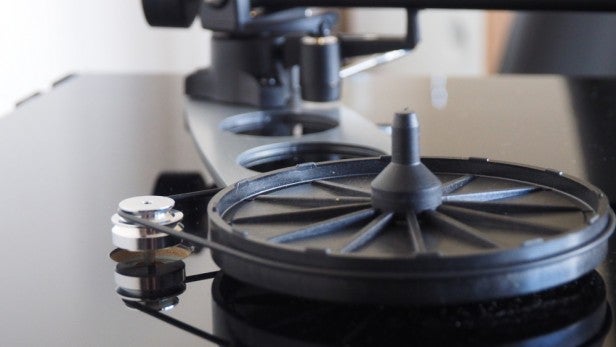 Since the pulley is under the platter, you have to wholly remove the platter to change speeds, which could be a little annoying if you swap between 33s and 45s an awful lot. You can easily rectify that problem by adding the optional TT-PSU power supply, which enables speed changes at the touch of a button.

The new 9-inch RB330 tonearm is unmistakably Rega and looks very similar to the previous RB303. The most obvious differences are a new design of arm clip and anti-skate dial. There are plenty of changes you probably won’t notice as well, such as all-new bearings, a new counterweight and stiffer bearing housing. The arm cable has also been upgraded. 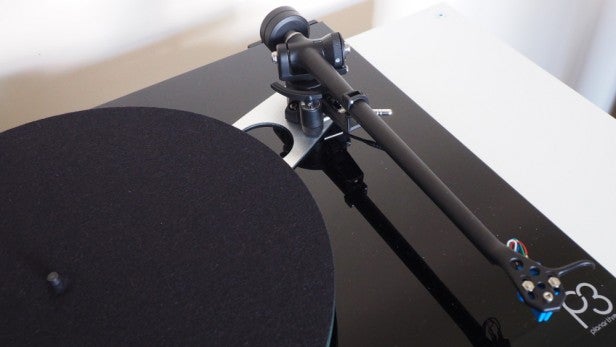 It has an integrated headshell, with a nice long finger lift, and the lift arm at the base of the arm feels reassuringly solid. Many turntables feel like they need to be treated with kid gloves, but this Rega certainly isn’t one of them.

The Planar 3 comes pre-fitted with Rega’s own Elys 2 moving-magnet cartridge, worth around £120, although you can buy it without the cartridge for £550.

There’s no record clamp provided, but Michell Engineering makes a rather nice one that’s specifically designed for Rega turntables for just £35. Neither is there a spider supplied for playing de-centred 45s. But one accessory you do get is a lid, which is uncommon beyond the entry-level models. If you can’t stand dusting or you have small children, this is a godsend. Its use is optional, though, since it simply slots in and out at the back of the plinth, and the Planar 3 looks just fine without it. 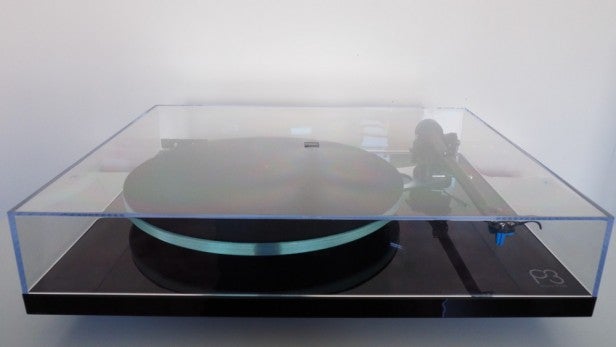 Another change that Rega has made from the RP3 is the placement of the on/off switch. It no longer sits incongruously on top of the plinth, but is now neatly hidden under the front left. You might have to hunt for it at first, but it soon becomes second nature to reach under and get your finger to it first time.

Setup for the Planar 3 is pretty minimal. The cartridge is already fitted and aligned, so it’s simply a case of popping the platter onto the spindle, fitting the dust cover – if you want to – and then setting the tracking force for the cartridge; this is achieved by moving the counterweight along the back of the tonearm, then using the large dial on the side of the arm to set the bias. 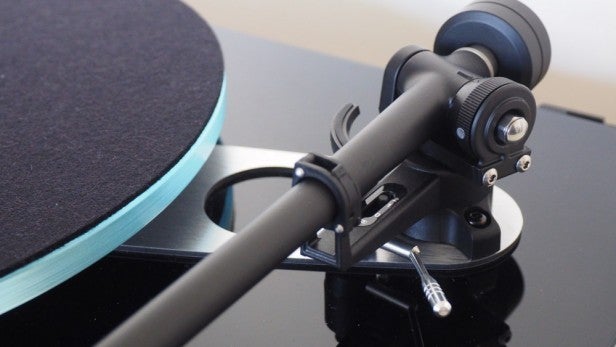 Sadly, Rega doesn’t supply a tracking-force gauge, but you can pick up a mechanical one for less than £10; digital models start at just under £20. You can get the force roughly right without one by following Rega’s instructions, but I’d recommend buying a gauge to make sure you get it right. Incorrect tracking force can make a huge difference to a turntable’s sound.

There’s no phono stage built into the Planar 3, so it needs plugging into a suitable phono pre-amplifier before hooking up to your hi-fi’s line input. I did most of my testing through the wonderful Leema Acoustics Elements Ultra.

Sound quality is absolutely astonishing for this price. The RB330 and Elys 2 combination is capable of superb resolution, timing and attack, without neglecting the bottom-end. The arm is easily capable of taking on a more expensive moving-coil (MC) cartridge for digging a little more detail out of those vinyl grooves, but the Elys 2 does a cracking job without breaking the bank. 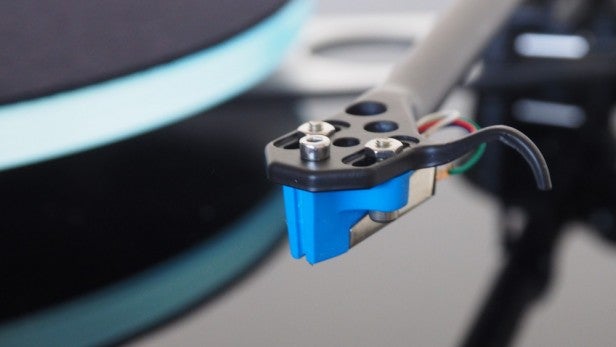 Percussion sounds crisp, vocals are clear and realistic, and there’s plenty of tight bass. The Planar 3 was as happy with Nick Drake and Stephen Fretwell as it was with some early Prodigy and Soul II Soul. It’s such a musical package.

A real highlight was listening to Pink Floyd’s “Welcome to the Machine”, with the Planar 3 applying such tight control and great timing to the searing, immersive stereo effects that it felt almost as if a laser circular saw might come spinning into my head at any moment.

Should I buy the Rega Planar 3?

For most people, this is all the turntable they could ever need. Sure, it isn’t as visually striking as the similarly priced Pro-Ject RPM 3 Carbon, but it does everything else so right.

My only real caveat is that if you swap between 33s and 45s a lot, you’ll probably need to budget another £200 for the optional TT-PSU power supply. That’s a significant additional sum, but it could be worth it for the added convenience.

If you’re looking for a record player for less than £1,000, you need look no further than this.

A truly remarkable turntable package that can’t be bettered for the money.