Coming to PS4 (version tested), Xbox One and PC on July 3

The original Red Faction was unparalleled in its environmental destruction mechanics at the time and Volition continued to push the boundaries until the series peaked with Red Faction: Guerrilla. Which is why I was super excited to get to re-step into revolutionary Alec Mason’s boots via a shiny new remastered version of the game. Sadly, while it looks great, the re-Mars-tered version of the game, its core gameplay hasn’t stood the test of time all too well.

Like the original, Red Faction: Guerilla Re-Mars-tered doesn’t give you a second to catch your breath before it thrusts you straight into the fold. As Alec arrives on Mars, he is greeted by his brother who warns Alec of the Earth Defence Force’s sinister nature. Within minutes we know who almost all the players are and where they stand. Then radio silence.

While Red Faction: Guerrilla starts fast it quickly meanders and fails to deliver on the promise of the opening and ends up almost as forgettable as its soundtrack.  There are moments that the potential shines through; an ominous voice, a mysterious clan of original Mars settlers, and a political and social minefield are all underexplored. And before you can contemplate what could have been, Red Faction: Guerrilla draws to a close. 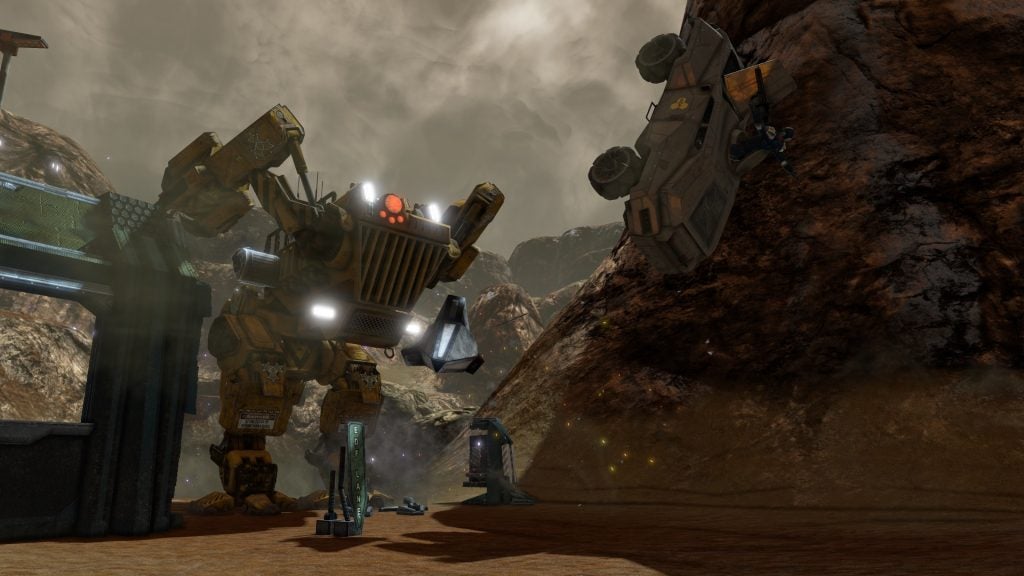 Thankfully, while the story doesn’t quite leave you hungering for more, Red Faction: Guerilla Re-Mars-tered more than satiates your appetite for destruction. After all these years, the iconic sledgehammer slowly chipping away at buildings still feels great. The inventive shaking of the camera and heavy thud of your hammer always result in an oh-so-satisfying demolition.

As a focal point of the series, it’s only natural that this would be a highlight, but every minute detail is curated right down to how sections of the building crumble, wobble, and inevitably crashing to the ground. And it’s not just the hammer that shines, all of the equipment, outside of the assault weapons, really pack a punch. From the Rocket Launcher to the Nano Rifle, there’s a wealth of different ways to pick apart the scenery –although in particular explosive situations the game will judder and occasionally crash.

Sadly this is the only good bit about the game’s combat. For every bone-shattering swing of the sledgehammer, there is an underwhelming squelch of bullets sinking into enemy flesh. The switch to a third-person camera was always an odd choice, given how well the first person view worked in the first two games. Vision is often obscured and you still lose sight of anything to Masons left when aiming. On top of that, the weapons are wildly inaccurate and deprived of ammo. While the scarcity of ammo does encourage you to switch weapons, it often feels like you’re being forced to make some truly awful choices while fighting. 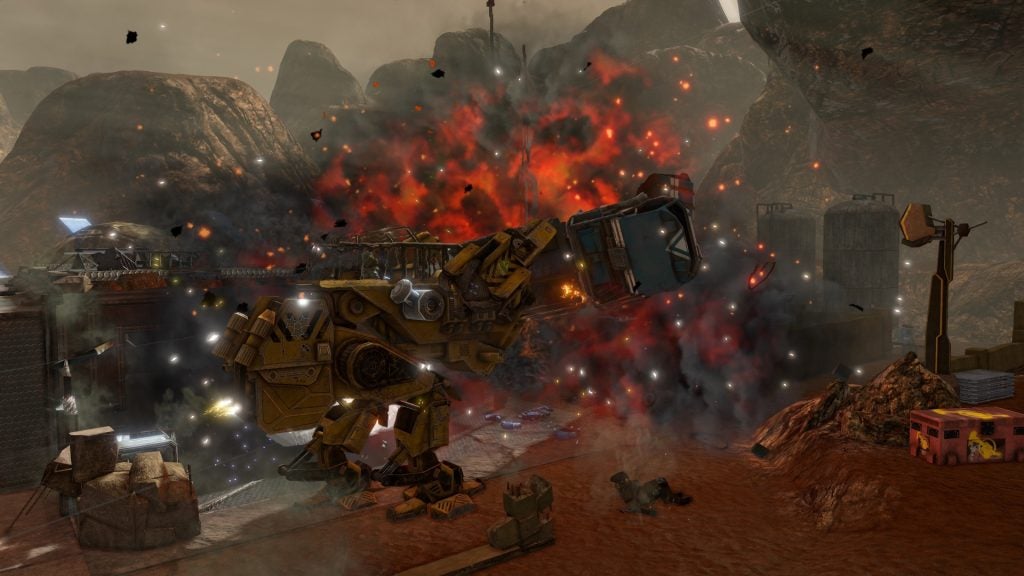 The upgrade system does partially make up for this if you’re willing to invest some time in the game. By the midway point, you’ll gain access to more powerful weapons with splash damage and a jetpack to completely avoid needless combat.

But to buy these upgrades you’ll need scrap, a heap of it to be precise. Scrap is the currency of choice in Red Faction: Guerrilla Re-Mars-tered and it can be gained through side missions, destroying buildings, and mining the ore scattered throughout Mars. In the opening hours scrap collection is fairly brisk and the impact on the overall game is negligible. But there’s a chokehold in later chapters where it becomes super important. If you haven’t saved you’ll have to scour every possible corner of the map to find it.

It’s when you are forced to scavenge that the cracks in Red Faction: Guerrilla Re-Mars-tered really start to show. While there have been some improvements in the definition of the landscape and the particle effects, it’s still a barren wasteland with little to offer over a series of different rocky caverns. This was already a prominent issue for the title back in 2009 and time has not been kind. We are now living in a time where side missions have meaning, story and charm, so revisiting a bunch of rather generic locations to collect scrap really hurts the pacing at the tail end of your journey. 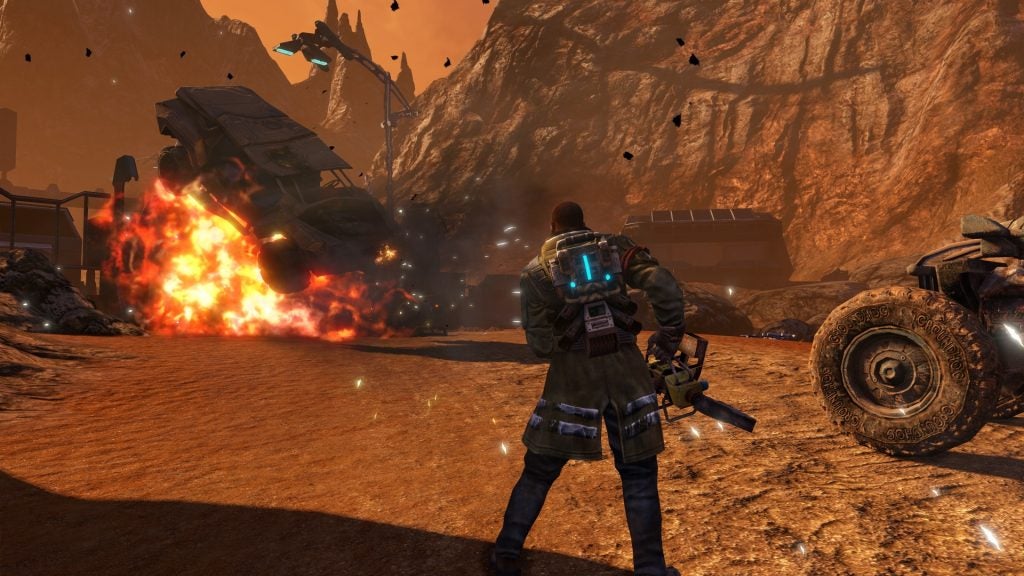 Thankfully Red Faction: Guerrilla Re-Mars-tered has more to offer than just its campaign. Although it wasn’t possible to test the netcode prior to release, there is clearly a plethora of options that allow anywhere between three to 16 players to take on each other in the online arena with all the bells and whistles you’d expect from an online shooter – including customisable player cards and spectator mode.

More importantly, there are the Wrecking Crew modes. Wrecking Crew has players jump right into the destructive goodness of Red Faction: Guerrilla without the added campaign baggage. It’s not enough to save the game, but it works wonderfully as a destresser when the campaign gets you down.

All-in-all, Red Faction: Guerrilla Re-Mars-tered is an odd time capsule. It’s indicative of a point in time where Volition was king, but only for a day. Guerrilla and Geo-Mod were quickly eclipsed by the increasingly flexible Frostbite engine and other advances across the medium.

What that means for Red Faction: Guerrilla Re-Mars-tered is that it’s a painful reminder that we have it and had it so much better, even if the remaster seems to be far more prone to crashing than the original. Games like Horizon Zero Dawn, Mad Max, and even Bad Company 2 do almost everything better than Red Faction ever could.