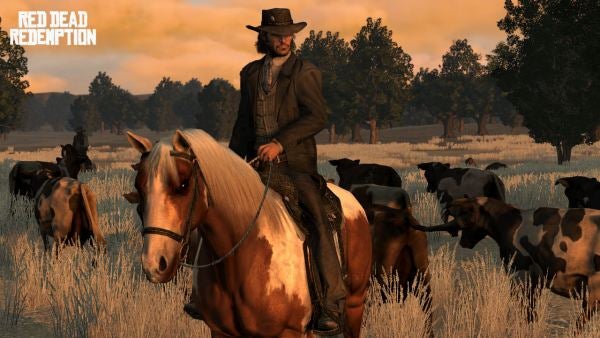 Maybe the dwindling popularity of the cinematic and literary Western is to blame, but it’s a shame that a genre so rich in atmosphere, violence and drama has only inspired the likes of ”Desperadoes”, ”Mad Dog McCree”, ”Outlaws”, ”Gun” and ”Call of Juarez”. These aren’t necessarily bad games, but the Western has never brought us something of the calibre of ”Bioshock”, ”Oblivion” or ”Mass Effect 2”. Or at least it hadn’t until now.


Red Dead Redemption, you see, is a bit of a triumph. It’s a great video game, a great Western, and further evidence that Rockstar isn’t just the pioneer of the open-world game, but the leading exponent by a blood-soaked back country mile. While developed by Rockstar’s San Diego studio under supervision from ”Grand Theft Auto’s” creative masterminds, the Houser brothers, it‘s taken much of what’s great about ”Grand Theft Auto IV” and its episodes to a radically different world. 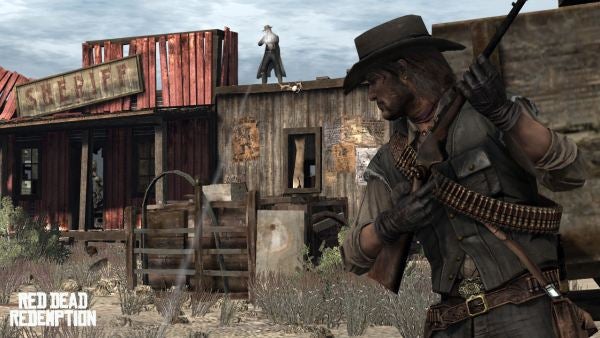 From the success with which it creates an immersive, believable world to its ridiculous attention to detail, its sense of character and drama and its anarchic, do what you will mentality, Red Dead Redemption sits right up there with Rockstar’s best work. To call it ”Grand Theft Auto” on horseback would be to do it an injustice, but in terms of the length and quality of the experience, it’s an apt description.


The basic setup won’t be unfamiliar to fans of ”Grand Theft Auto”. A man with a troubled past – in this case a retired outlaw called John Marston – arrives by train in a town riddled with crime and opportunity. By making contact with figures on the local scene, he gains access to missions, which progress relationships and move the story on its way.


Which missions he takes, and in which order he takes them is – within the constraints of the central story – up to him, and even if he’s not on an active mission, there’s still plenty of stuff to do. In ”Grand Theft Auto”, you might be stealing cars to order, taking taxi fares or squiring a girlfriend around town. In Red Dead Redemption, you’re more likely to be hunting and skinning animals, catching and breaking wild stallions, racing horses or gunning for the bounty on some outlaw’s head. The basic structure of the game, however, is broadly the same.

Red Dead Redemption (RDR) does depart from the ”Grand Theft Auto” (GTA) formula in all sorts of other ways. For a start, while there are towns and ranches scattered across the game’s early 1900s Mexican border setting, the majority of the game takes place in the vast spaces between them; in the canyons, hills and scrubland of the wild frontier. The risk with this kind of setting is that it’s either devoid of life, or that it’s full of slightly dull, repetitive tasks to complete – an accusation often thrown at open-world games like ”Far Cry 2” or the first ”Just Cause”. 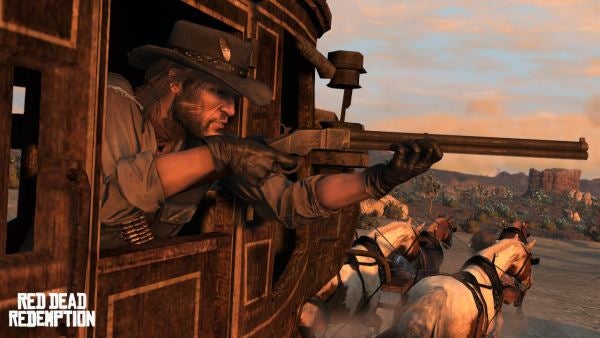 RDR avoids this with a system of random events that occur just off the road or over the next ridge as you’re riding along from place to place. Whether it’s prisoners escaping from a marshal, a woman being attacked by coyotes or a would-be horse thief trying to catch you off your guard, there’s always something interesting going on, and if you don’t want to get involved, then you don’t have to. Inevitably, these random side missions repeat after a while, but not to the extent that you’ll grow tired of them.


Meanwhile, the open country is rich with critters, ranging from wolves, coyotes and wild horses to cougars, rabbits and deer. Some can be killed, skinned and sold for meat and fur, while others will gang up to attack you on horseback. The old West has never seemed wilder. 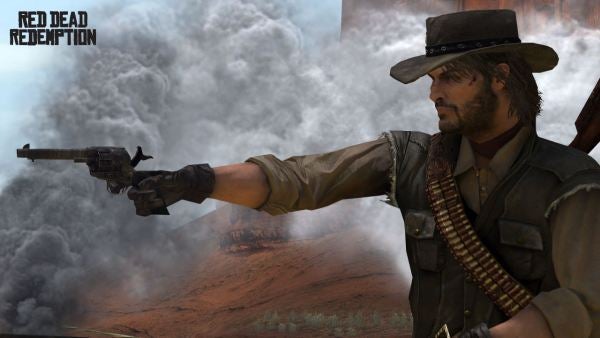 RDR also works surprisingly well as a straight action game. Marston is by trade a gunslinger, and his over-arching mission is to kill an old comrade who the government wants dead. His services are constantly on call from struggling lawmen, drunken crooks, pompous snake-oil salesmen and good-natured ranchers, and missions that don’t involve bloodshed are rare indeed. Well, we had our doubts about the gunplay in ”GTA” and its two episodic add-ons, but RDR nails it. Finding and firing from cover works without a hitch, and there’s just enough assistance when aiming to make you feel like a bad-ass without leaving you feeling like the game is playing itself.


The various outlaws, treasure hunters, soldiers, brutes and miscellaneous varmints you’re up against aren’t the smartest adversaries around, but they can use cover and move about when necessary, and the game’s general tactic of challenging you with overwhelming numbers helps give it a fast-paced, action-packed feel. If you’ve seen a shoot-out situation in a Western, it’s probably here, from the classic duel to horseback chases to almighty blast-outs in decaying mansions, and the best of these make for incredible set pieces. 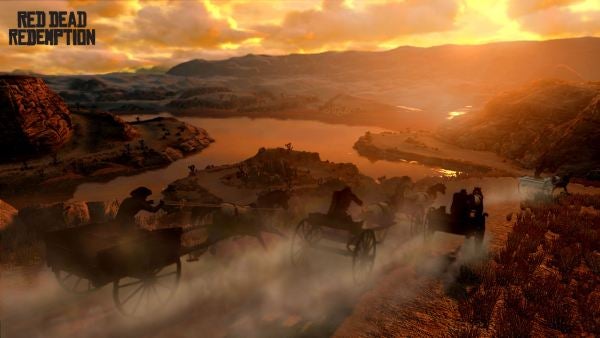 Best of all, RDR still finds room for a cool, slow-motion targeting system – the so-called, ‘Dead Eye’ view – where, with a click of the right thumbstick, you can line up several shots then execute them at once in a single burst. Sure, this sort of thing has been overdone in games from ”Max Payne” onwards, but it’s such a good fit here for the gritty Western theme that it’s hard to complain. In fact, combined here with the excellent Euphoria character animation system, it makes for some spectacular scenes of ”Wild Bunch”-style violence.

Yet it’s not the six-shooter action that is Red Dead Redemption’s biggest asset, but its incredibly compelling storyline and atmosphere. Basically, Rockstar knows, better than anyone else working in the open world genre, how to create characters and situations that resonate with what we’ve already seen in movies, but with an interesting new twist.


At its best, the writing and characterisation here is excellent. Fans of ”The Wild Bunch”; of the Leone/Eastwood ”Man with no Name” series; of the ”Django” series; of Eastwood’s own westerns; of ”Deadwood”; and of recent, gritty westerns like ”3:10 to Yuma” and ”The Proposition” are in for a treat with this one, as it explores Western myths, revolution in Mexico, crime, honour, brotherhood and progress. Red Dead Redemption is first and foremost entertaining, but, like ”Grand Theft Auto IV” before it, it’s a game with hidden depths. 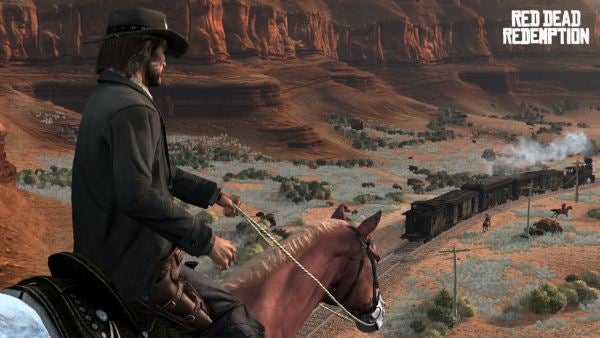 Marston himself is a compelling character; a hardened killer, but a man with his own sense of justice that makes it surprisingly hard to play him, should you wish, as an out and out bad guy. You can steal a stagecoach or take up banditry in the backcountry, but the more you play, the less you want to. Instead, it’s actually the game’s less violent moments that stick in my memory; pleasant conversations with a female rancher; driving home a frightened herd through torrential rain; nostalgic dialogue with an ageing legend who stands for the best of the old ways.


The world, meanwhile, is every bit as rich in colour and detail as the pseudo New York of Liberty City. As well as the saloons, sheriff’s offices and gunsmiths you might expect from a Western, you’ll find newspapers full of recent activities – including some of yours – plus games of poker, blackjack and horseshoe-tossing to engage in. There are sets of clothes to collect, with each suit changing the way that others see you. Your acts boost or damage your reputation, for good or evil, and while the system doesn’t seem as sophisticated or as all-pervasive as the reputation systems in ”Fable II” or ”inFamous”, it all feeds into the sense that you’re not merely playing a game, but playing a part. 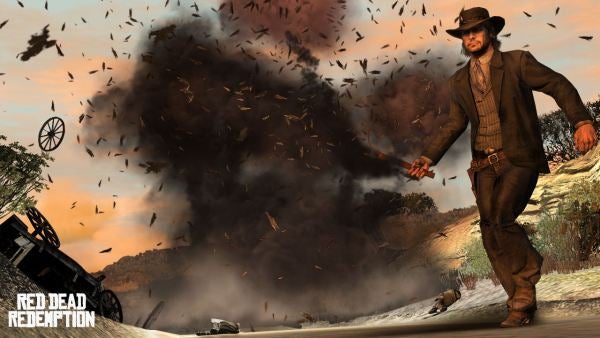 Of course, there are limitations and the odd moment where you can see the scenery wobble. Some events in towns, like sudden bandit attacks or customers attacking the local floozies, happen a little too frequently to be believed, and few of the background characters have anything more than a basic snippet of speech to utter as you walk nearby.


You can kill half the no-good outlaws in a dodgy town, flee on horseback with shots ringing out behind you, then return two minutes later without a word of anger on the streets. Maybe it’s a little too easy to accidentally hold up a stagecoach, and find yourself with a bounty on your head. All the same, these are minor flaws in a stunning experience. If they degrade your sense of immersion, it’s only for a minute before the next event kicks in.

It also helps that Red Dead Redemption’s world is a beautiful one. It runs on an enhanced version of the engine that powered ”Grand Theft Auto IV”, and while the characters aren’t quite as convincing as those in ”Heavy Rain” or ”Mass Effect 2”, and the environments aren’t as rich in textural detail as what you’d see in ”Uncharted 2” or ”Crysis”, it doesn’t really matter. From the rocky scrubland around the frontier town of Armadillo to the breath-taking mesas and rock arches of Nuevo Paradiso, there are breathtaking sights a-plenty, and there are times when you’ll find yourself just trotting on horseback as the sun goes down for mile after mile, checking out the scenery. It’s a world you want to explore to its full. 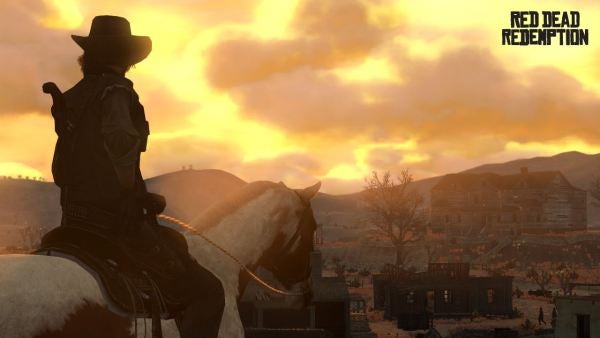 All this is good, because Red Dead Redemption is, in true Rockstar style, an epic. There’s so much content in here that we’d sunk nearly a dozen hours into the game by the time we got to what you might call the ending of the first chapter, and with a good few more hours clocked in on top of that, we still feel like there’s a huge amount of game to work through. This won’t be a problem. As with ”Grand Theft Auto IV”, it’s not so much a question of finding the impetus to carry on playing as forcing yourself to stop. One mission leads on to another, one story arc develops as another meets its end. Red Dead Redemption doesn’t so much immerse you in its world as drag you under and hold you there until you nearly drown. Start a quick game at 10pm and you’ll be lucky if your head hits the pillow before two. 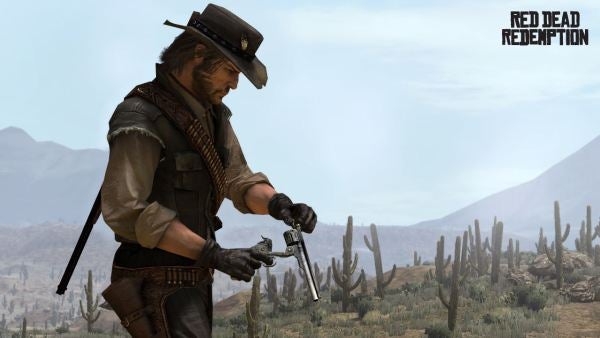 By now, you probably get the idea. Where the original ”Red Dead Revolver” was a curiosity, this is the real deal: an open-world Western every bit as good as Canis Canem Edit (a.k.a. ”Bully”), ”GTA: San Andreas” or ”Grand Theft Auto IV”, and arguably the finest example of the genre yet. If you know and love ”The Good, The Bad and The Ugly” or ”High Plains Drifter”, it’s a must, but even if you don’t you’ll find it one of the finest games to mosey your way this year.


Rockstar’s magnificent Western isn’t simply ”Grand Theft Auto” on horseback, but a rich, immersive experience with a tone and style all of its own. With beautiful scenery, brilliant set-pieces, fantastic characters and a compelling tale to tell, it’s arguably the best open-world game yet.