Available on Xbox One (tested) and PC

Zelda in space sounds awesome right? On paper, that’s exactly what ReCore is. It borrows elements from classic open-world platformers like Prince of Persia, melds them with the dungeon-conquering mechanics from Nintendo’s iconic Zelda series, and wraps it all up in a sci-fi setting that’s rife with mystery.

This should make ReCore the ideal game for space geeks like me with a penchant for platforming – and for the most part it is. However, issues with its combat, framerate and slightly by-the-numbers puzzles stop it fully delivering on its opening promise.

The game starts out strong and tells the story of a girl and her robot. Specifically it sees you take the role of Joule Adams just after she’s woken up on the alien world of Far Eden, after over two centuries in cryosleep.

Joule’s awakening isn’t a pleasant one. Far Eden was meant to have been terraformed by automated machines called Corebots during her downtime, but something went wrong. As a result, Joule wakes up alone on a dust-filled planet that’s only been terraformed partially, and the Corebots have gone AWOL.

Her only clues to what’s gone wrong come from a series of video and audio messages from her father, who just so happens to be one of the chief scientists working on the Far Eden makeover and is one of the aforementioned missing humans. 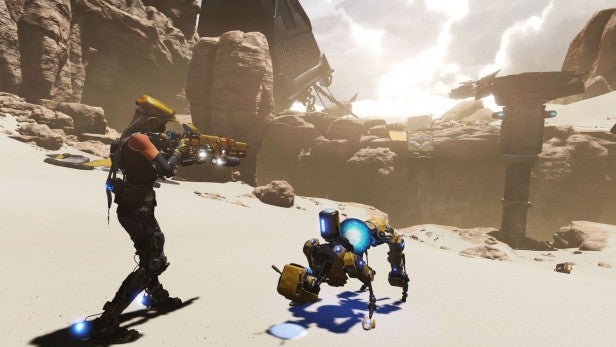 From there Joule arms herself with her trusty rifle, grabs the nearest exosuit and goes with her Corebot dog, Mack, to figure out what went wrong.

The exploration format follows the same pattern as most sandbox games. The world is open, but story missions are highlighted using big green icons. Side missions take the form of optional dungeons and challenges, offering loot rewards upon completion.

The opening scenes are an outright pleasure to behold. Far Eden is a giant, beautifully created world that merges elements of Dune’s sandworld and Battlestar Galactica’s technology.

The rich graphics and great designs initially meant exploring the world was a joy and made me ignore the big green mission icon on my map. Within five minutes I’d found everything from the wreckage of an abandoned space ship to a mysterious cave complex and boobytrapped dungeon. 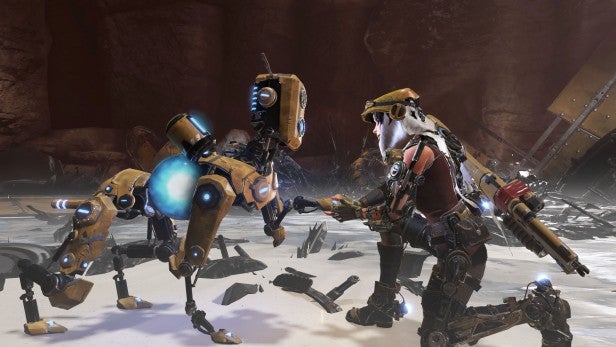 The desire to explore is helped through the game’s wonderful platforming, looting and upgrade mechanics.
Joule has a variety of different ways to get around her environment, thanks to her exoskeleton. The exoskeleton has thrusters that let her double-jump in mid-air, or propel herself forwards at increased speed for a short period. Backing this up, she has a grappling hook that can be used to pull objects open.

Her robot companions also improve her mobility. Mack is one of several mechanical buddies Joule recruits throughout the game. Each bot has its own personality and set of special abilities.

Mack, for example, is a cute and loyal robot dog with a special search capability. This lets you instruct him to hunt for buried objects in a set area. This mode’s useful for finding hidden key-Corebots that open doors or for discovering loot that can be used to build new parts for Joule’s robotic compadres.

Later on you’ll find the cowardly spider-bot Seth who, despite his fear of heights, can carry Joule up special yellow rails that are otherwise impassable. Duncan is a heavy-hitting gorilla-style Corebot with a talent for smashing things. 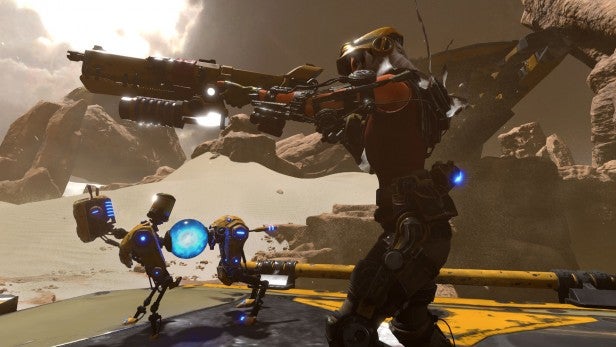 The relationship between Joule and her companions is one of the story’s best features, and regularly throws up heart-warming sections that are reminiscent of classic Disney films.

The only limits to where you can go are how tough enemies in the area are, and how many Prismatic Cores you have. Prismatic Cores act as keys and are used to unlock dungeons and doors. Every dungeon or door you encounter will have a recommended level and core number, which tells you how many you need to access it.

Dungeons are, without a doubt, the best bit of ReCore. The game offers a variety of different labyrinth types which task you with three challenges: traverse the entire level in a certain time, shoot a set number of hidden icons, and find a single yellow switch to flip. Each of the three goals gives a unique loot reward and can be completed individually – which is a good thing, as I’m yet to complete all three at once in any of the dungeons I’ve visited. 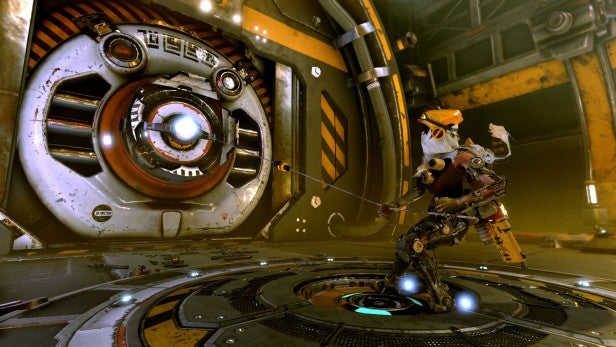 The dungeons have great level design that showcase the best parts of ReCore’s platforming dynamics. These range from classic Zelda-like dungeons that tasked me to quickly leap between moving platforms, to multi-level pits that forced me to manically search for hidden red keys and switches using my Corebots’ special abilities.

The upgrade system also acts as a decent incentive to keep exploring early on. Joule can upgrade her Corebot companions at the engineering bench in her home base using blueprints and loot she finds on her adventure.

Each blueprint alters the Corebot’s appearance and buffs their attributes. The higher level the part, the better the stat boost. You level up your bots by completing missions and beating enemies. You can further boost your bots’ core attributes using captured enemy cores.

The system’s pretty basic, but it works well enough and gave me a further nudge to keep hunting for parts and visit dungeons.

All this is great, but sadly I quickly found a some large flies in the ointment. Combat is one area no platformer has ever truly gotten right, and sadly ReCore does little to buck this trend.

There are a variety of different enemy types, ranging from flying moth-like Corebots, to exploding beetle bots, slashing spider bots and gargantuan gorilla-bots. But every single type is killed the exact same way: pick the right ammo type, auto-lock and shoot.

The colour-coding system should, in theory, add some variety, but if anything I soon found it to be an added source of frustration. Joule’s gun can fire red, white, yellow or blue ammo. Each type is strong against different enemies: blue ammo beats blue enemies, red against red, etc. This is fine early on when the enemies conform to one type of colour and stick to it, but against bosses and, later, hybrid enemies which rapidly switch their type, it becomes annoying. 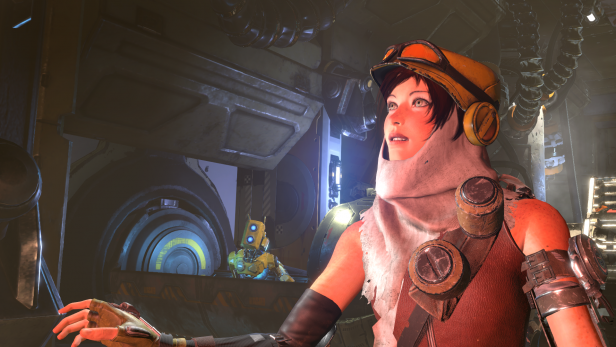 This is because you have to switch your ammunition type using the D-pad – a practice that makes you, even if just for a millisecond, have to stop controlling Joule’s movement. Initially this isn’t a problem, but against tougher enemies, which inflict lots of damage and attack constantly, it feels like the game’s forcing you to be vulnerable and it leads to a number of fairly cheap deaths.

I had the same issue with the game’s core extraction mechanic. After inflicting a certain amount of damage a pop-up appears above enemies, giving you the option to extract their core. If you do, Joule will fire her grappling hook and begin playing tug-of-war with the bot to pull out its core – the item you need to upgrade her robo-companions’ core stats at any engineering desk.

The practice can take some time, and again it forces Joule to remain stationary. This isn’t a problem in most regular fights, as you can always ignore the icon and just blast your enemies to pieces. But in boss battles, which involve lots of enemies and only end when Joule gets the big baddy’s core, the process regularly leads to boring fights that outstay their welcome.

The only saving grace for the combat is its nifty combo system. Each of Joule’s Corebots has a special attack that can be activated using the Y button (on Xbox). Mack, for example, charges forward and shocks enemies for Joule, while Seth will fire a barrage of yellow bombs. The companions’ attacks follow the same colour system, so blue enemies will be vulnerable to Mack, while reds will want to avoid Duncan, and so on.

You can only have one of the Corebots on screen with Joule at any one time, but switching between them simply requires a quick push of the RT button. The ability to swiftly change bots and mix their attacks feels far more fluid than the ammo system and is a saving grace in ReCore’s otherwise dull fight mechanics. 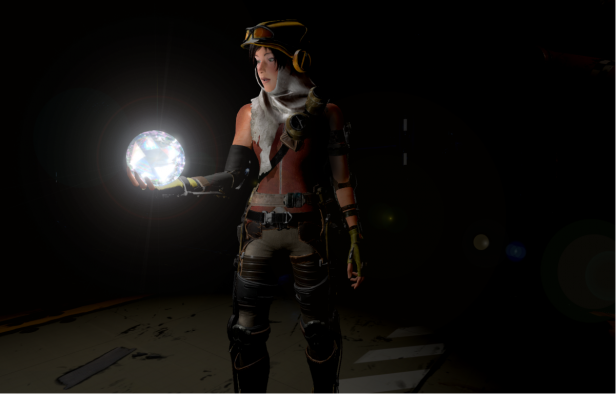 The boring fights wouldn’t be an issue if combat played second fiddle to platforming, as it did in Prince of Persia, but ReCore seems hell bent on pushing it to the forefront. Nearly every mission ends with a long-winded battle against a bullet-sponge Corebot boss. The ensuing battles usually take so long that you’ll have all but forgotten the fun you had getting to the fight in the first place.

Then there are the technical issues. ReCore may look nice, but the loading times are painful. The game regularly takes over three minutes to load, even when doing basic things like moving from one area to another, or restarting a section after dying.

I’ve also noticed some serious framerate issues. During busy sections the game noticeably slows down and suffers from framerate drops. For a game where timing is everything, the slowdowns are particularly annoying and regularly result in cheap deaths during combat and missed leaps during platforming.

ReCore has a lot of great things going for it. Joule is a likable protagonist and her robotic companions are outright adorable. The platforming exploration is an absolute blast.

However, it’s all dragged down by a combat system that ruins the game. The end result often frustrates as much as it excites.

Still, if you’re a die-hard fan of platformers in the old-school Nintendo style, ReCore will be a fun stopgap while you wait for The Legend of Zelda: Breath of the Wild.

If you lack that nostalgia for retro gaming, though, you might be best-served looking elsewhere.