Can you hear that awful bawling racket from where you are? It’s the sound of millions of kids whose parents didn’t have the sense to buy a Wii back in September when stocks were relatively plentiful. Now the poor mites have to look forward to a Christmas without Wii Sports, Wario Ware and Super Mario Galaxy. Pity them, still tied to a last generation console and unable to experience the fun of motion sensitive gaming. How can it be a Merry Christmas without Wii? 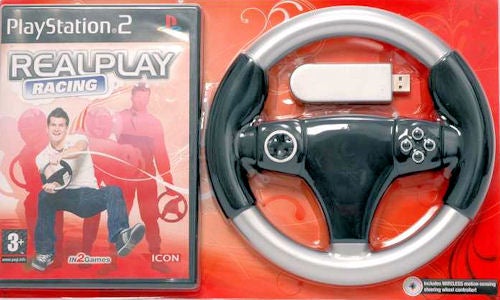 But wait, say the guys at In2Games – there’s a way you can experience some of those same Wii thrills using nothing more than a £25 bundle and that PS2 you were just about to leave for dead. Each Realplay set contains a game, a special wireless controller and an RF wireless interface module which plugs into a spare USB port on your PS2. Stick the disc in the drive, plug the wireless module in and pull the plastic battery protector out of the controller, and you’re hooked up and ready to go.


Four packages are available right now, including Realplay Racing (with motion-sensitive steering wheel), Realplay Pool (with a motion sensitive pool cue) Realplay Golf (with pint-sized motion sensitive golf club) and Puzzlesphere – a Monkey Ball style roll-‘em-up partnered with a handy tilt-sensitive ball controller. Technical details are fairly short on supply, but here’s what we do know: like the Wii remote, the units use accelerometers to sense the speed and direction of movement, though the controllers can’t match the Wii remote’s ability to sense 3D position via infrared detection. Power is supplied by a pair of AAA batteries. 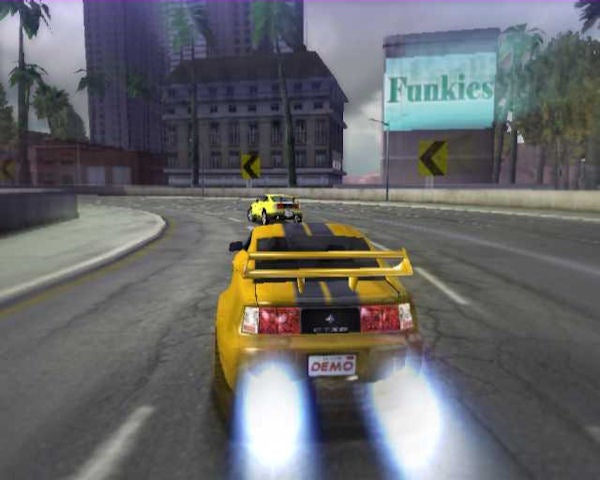 The individual controllers are a bit of a mixed bag. The simple Puzzlesphere ball is probably the best – light and comfortable in the hand, with only a couple of small buttons and a D-pad needed to select menus, access power-ups and get the onscreen sphere to brake or move cautiously. The pool cue is a three-part plastic effort and feels a little toy-like, and it’s clear that only the bottom section actually does any work. The Racing steering wheel is a little lightweight for my taste and suffers from horribly small buttons, but its usable enough in-game. None of them have the solid feel of Nintendo’s Wii hardware, but if you’re used to third-party peripherals you won’t find them at all cheap and nasty.

Let’s cut to the big question: does this Realplay stuff actually work? Well, the hardware certainly does. Tilt the Puzzlesphere ball and the onscreen sphere rolls off in the right direction. Tilt it softly and it rolls at a slower pace; tilt it wildly and it rolls at quite a lick. In the racing game, rotating the steering wheel left and right steers the onscreen car left and right, and there’s a certain degree of range between harder steering and softer steering (and the game has the sense to include three default settings of responsiveness). I was sadly unable to test the golf game, but you could definitely see the accelerometers working in the three-part Realplay Pool cue. Soft shots gently push the cue ball into play, while hard shots send balls rocketing around the table in a fairly satisfying manner. 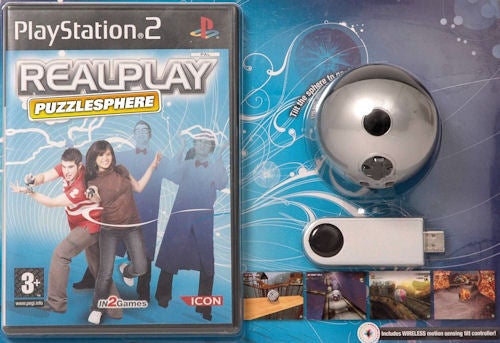 The problem is that the software supported by the hardware is at best adequate and at worst pretty rotten. I kicked off with Puzzlesphere – a game I had heard some good things about – and I was immediately horrified by the primitive 3D backgrounds, low-resolution textures and poor lighting on display. It makes the PS2 version of Super Monkey Ball 2 look like Bioshock.


Still, graphics aren’t that important here. What is is the gameplay. Is Puzzlesphere as much fun as, say, Super Monkey Ball: Banana Blitz? Sadly, that’s a big, big no. For a start, it’s nowhere near as accessible. In the very first level you’re hit with demanding, twisting narrow paths with fatal drops on either side, forcing you to constantly reach for the brake button if you fancy any chance of survival. And from here Puzzlesphere only grows more difficult. Checkpoints within the level help reduce the frustration factor by a miniscule amount, but that good work is undone by the decision to give you only three lives with which to complete the level, otherwise it’s back to square one. It’s a shame, because the motion sensitive controls are actually quite well implemented, but the whole game design and difficulty level is pitched above what the casual gamers will normally stand. 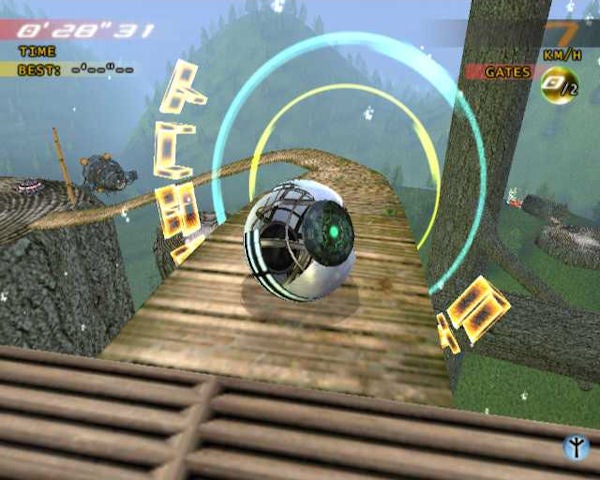 Realplay Racing isn’t really any better. The visuals are just about functional, but on a system that can produce racers as good looking as Gran Turismo 4 and Burnout: Revenge ‘just about functional’ doesn’t really cut the mustard. And once again the course design and initial difficulty seems weighted against casual players. Just about anyone can pick up Excite Trick on the Wii and have a good time, but Realplay Racing doesn’t give you the simple tracks you need to get you started nor any incentive to keep playing. The bare bones racing and simple championship structure just doesn’t seem optimised for fun.

At first, Realplay Pool looks like the best of a bad bunch. The graphics are still fairly dire, but there’s a world tour mode along with quick match options, and even a Create your own Player feature (though not one that will give EA any cause for envy). But then you discover that the pool cue only really controls the vertical angle and the velocity of your shot, while the specifics of aim and spin are controlled using the D-pad mounted on the shaft. Worse, there’s no real-time feedback on the forwards/backwards movement of the cue, making it hard to judge the strength of shots. Realplay Pool is playable – and with a bit of practice roughly enjoyable – but in no way does it approximate the feel of the real thing. 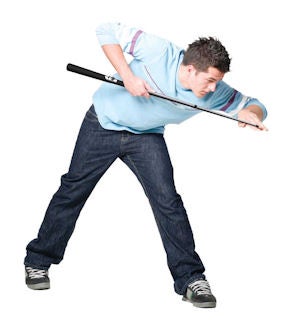 And overall you can’t help feeling that In2Games has missed what made the Wii and its best games so lovable and so successful. These were games that a huge range of people from different generations could just pick up, play and have fun with. They had been playtested and doubtless focus-grouped to destruction, and they made a virtue of the Wii’s limited graphic capabilities through great design. Most of all, the best parts of Wii Sports – particularly tennis – caught a little of the flavour of the real thing. You could feel the way the position and movement of the remote played out in the action on-screen, and you didn’t even need a clumsy plastic racket attachment to make that happen. By comparison, this first batch of Realplay games feel amateurish, poorly conceived and badly executed. 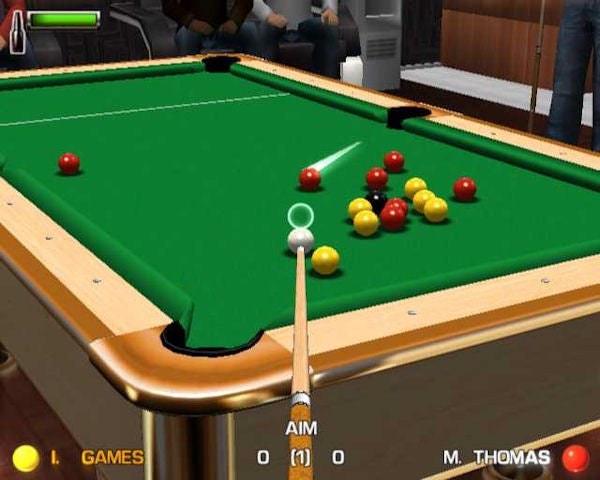 I’ve no doubt In2Games has the technical know-how to build effective hardware, and I’m still keen to see whether its next-generation Freedom controller, aimed at the Xbox 360, PC and PS3, can use its advanced ultrasound-based technology to give a Wii experience on the next-gen console hardware. But if it’s going to take off, then its software needs to be an awful lot better than what I’ve seen here. As they are, neither Puzzlesphere nor Realplay Pool nor Realplay Racing is going to make an adequate replacement for a Wii this Christmas. You might be looking for a stopgap to keep the kids happy, but you’re only going to pile one disappointment on another.


The Realplay hardware seems sound, but the software just isn’t up to scratch. It takes better game design than this to make something that can stand in for a Wii.