The performance and screen of this phone live up to the hype, but the camera leaves something to be desired.

Editor’s note: Trusted Reviews tested a pre-production sample of the Realme X50 Pro 5G for this Hands On review, which did not have finalised hardware or software. The full review of the finished product is forthcoming.

The first 5G phone from Realme, the Realme X50 Pro 5G, is a leap into the high-spec territory for the brand which is known for delivering great value phones on a budget.

It boasts six cameras in total – two on the front, four on the back – as well as Qualcomm’s leading Snapdragon 865 chipset, and an AMOLED screen with a 90Hz refresh rate and a 120Hz touch sampling rate.

The X50 Pro is a large but not unwieldy handset thanks to its 6.44-inch display, and at 205g it’s by no means the clunking, burdensome device that some members of the first generation of 5G phones were prone to being. It felt convenient and comfortable to use. 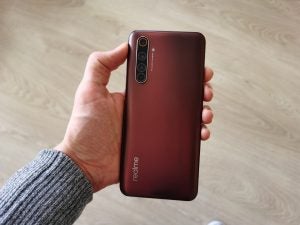 Its rear panel has a matte finish, which is welcome because it doesn’t leave fingerprints and feels smooth rather than slippery to the touch. Our sample had the Rust Red finish, an understated orange-brown colour that’s complemented by two golden highlights – one on the power button, and the other circling the lead 64-megapixel camera sensor. That camera is one of four on the rear of the device, arranged in a vertical column.

The X50 Pro’s AMOLED screen measures 6.44-inches, and it has a resolution of 1080x2400p. The contrast is strong, and it’s capable of high levels of brightness – though I found the default auto-brightness setting tended towards being somewhat dull.

But for those in the know, a couple of the Realme X50  Pro’s screen specs might seem more impressive even than the camera set-up or the 5G connectivity. It boasts 90Hz refresh rate – similar to the Google Pixel 4 or OnePlus 7T – meaning that the screen updates itself 50% more often than most phones on the market, for a smoother experience. Alongside that, it also packs in a 120Hz touch sampling rate, which should be ideal for gamers who want an edge over their opponents. 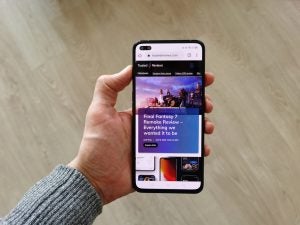 In terms of daily usage, the refresh rate does make scrolling smoother – you can pick out text and images when flicking quickly through your social media feeds for instance, which is more satisfying than a nondescript blur. And games certainly run smoothly and responsively too – thanks also of course, to the fearsome power that this handset brings to bear. During my time with the phone, I didn’t find the cutout for the dual selfie camera to be intrusive at all.

The Snapdragon 865 is Qualcomm’s flagship silicon for mobiles, and it is twinned with the X55 modem to offer 5G connectivity. However, when doing this hands-on review, we used a 4G SIM card so did not have access to the 5G network; our observations all relate to 4G performance. 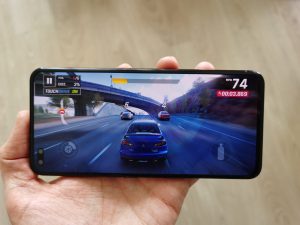 This is one of the best mobile processors you can buy, so you should expect to run any of the apps on the Play Store without a problem. In our experience, this device delivered a great performance, with games running very smoothly on the highest graphics settings without breaking a sweat. It really helps you to feel invested and immersed in the game, and as previously mentioned, the screen offers greater responsiveness than most of its rivals.

The X50 Pro has a healthy battery capacity of 4200mAh, and we expect that it will need it due to the demands of its high display refresh rate and 5G connectivity. In our usage of the phone, the battery held up well – after one hour of video streaming via YouTube, the battery was depleted by just 3% from a full charge.

The lead camera sensor in this device is a 64-megapixel sensor, which is a very high resolution pretty much only topped by the likes of the 108-megapixel sensor on the Samsung Galaxy S20 Ultra or Xiaomi Mi Note 10, so we had high expectations. Alongside this are three further rear sensors to augment the photographic performance – a 12-megapixel telephoto sensor, an 8-megapixel ultrawide lens, and then a 2-megapixel depth sensor for improving portrait images. 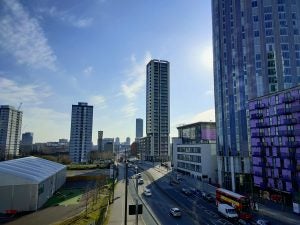 Generally, the main camera performed well, giving a decent amount of detail, representing colours accurately, and distinguishing well between light and shade. It seems like a reliable snapper that should serve you well during daylight hours. 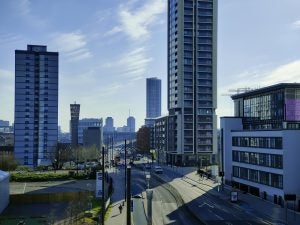 The telephoto lens offers some variety thanks to its 2x zoom. Likewise, these images are pleasing, and you can clearly make out the features of objects in the far distance. There’s an option for 5x digital zoom, but there’s naturally a significant loss of detail at this point. 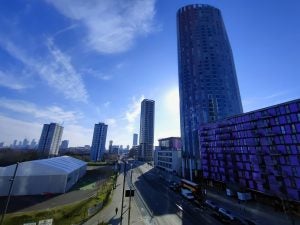 The ultrawide lens noticeably lacks detail compared to the other sensors, with some parts of the above image appearing blurry and indistinct. There is also some distortion which is common on such sensors, and colours are not as vivid either. Generally, this was a disappointing lens to shoot with, and it doesn’t ass much to the package. 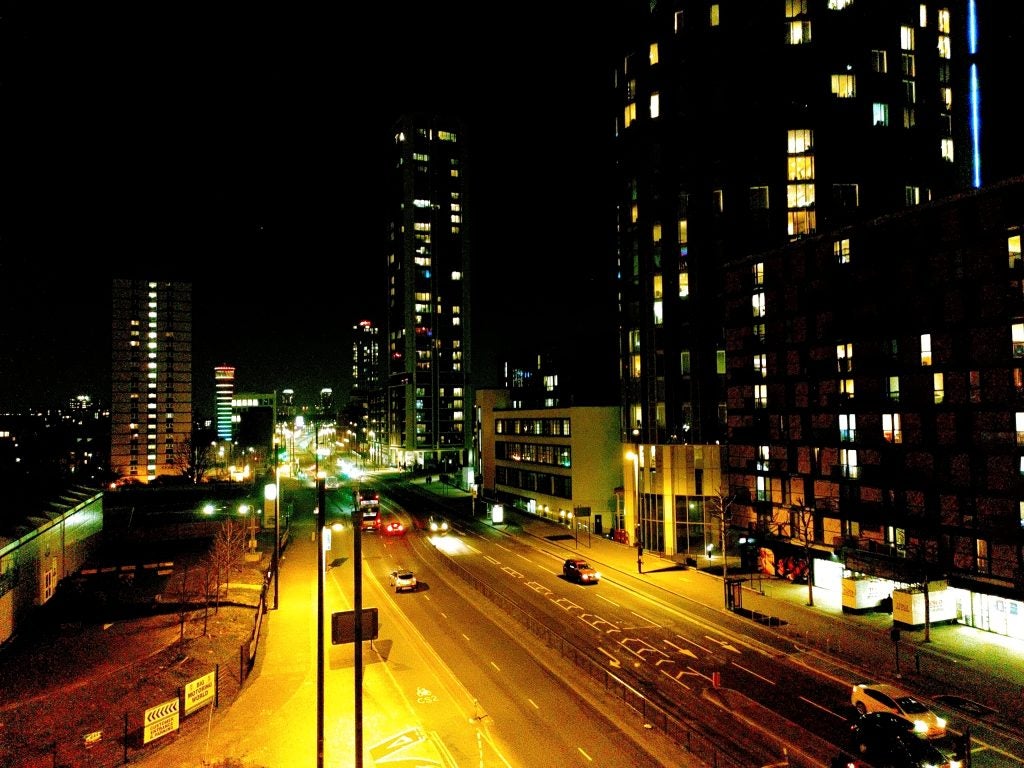 This camera performs very poorly in low-light, even in comparison to much cheaper models. Images were very grainy, and highlights are blown own. The poor performance was hardly mitigated at all when shooting with Night Mode switched on; although some colours were saved, a greenish hue became apparent as well. This could be an issue with the pre-production software, so we’ll look again once our unit is up-to-date. 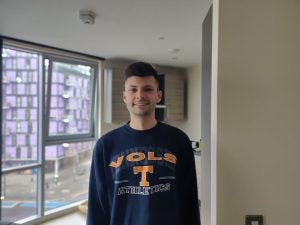 Portrait mode employs the depth sensor to give a bokeh effect, blurring the background to emphasise the subject in the foreground. This effect worked well in our experience, neatly cutting around the subject; however, on default settings, there is a lack of detail on the face, with features smoothed over instead. 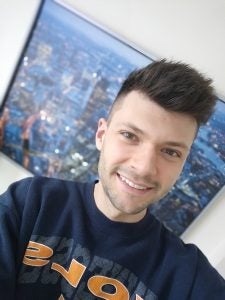 The selfie camera consists of two lenses (a 32-megapixel main sensor and an 8-megapixel ultrawide). Portraits with this set-up looked good, and the bokeh effect once again works well even though it presumably relies on software rather than a physical effect. 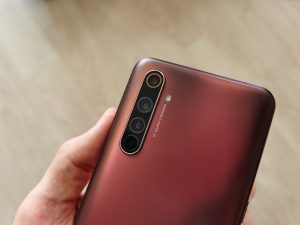 Ultimately the camera is a mixed experience; on the one hand, the main camera and telephoto sensor perform well in daylight, but the ultrawide was relatively poor, and low-light shots were very disappointing.

As mentioned previously, this is a pre-production sample; we have to hope that the real deal will see a significant improvement.

The Realme X50 Pro offers a lot of top-quality specs for its upper mid-range price, including a genuinely top-flight processor, cutting edge 5G, and a screen enhanced by superior refresh rates. If you’re a gamer, this phone seems to be a good choice.

However, while the camera generally does perform well in daylight, the ultrawide lens isn’t up to much, and low-light performance was a real disappointment. If you want a top-class camera that excels in several disciplines, then you’ll probably want to look elsewhere.

Please bear in mind that our first impressions have been based on a pre-production sample of the device.