Considering my job here at TrustedReviews is pretty clearly defined – I’m Digital Photography Editor – I get sent some pretty odd stuff from time to time, and particularly computer software. It seems that if you can wedge a digital photograph into it somewhere then it lands on my desk sooner or later.


I’ve got two programs to look at today, both from Reallusion, the same company that produced Face Filter Studio 2 which I reviewed last month. Reallusion specialises in niche graphics products aimed at the consumer rather than the professional, and both these programs are designed for home use. 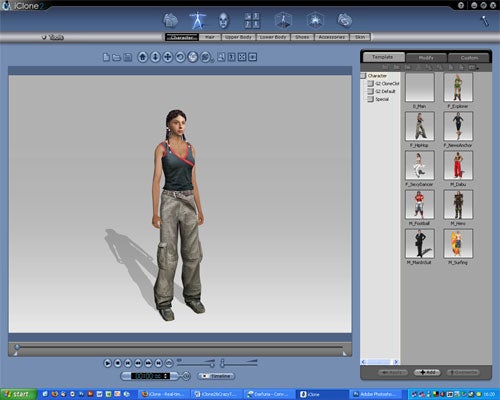 iClone 2 Studio is a 3D animation program with which you can create 3D avatars for use in some advanced chat or VOIP programs or for making 3D animated characters fro your own computer games or artwork. The original iClone program, launched in 2005, has built up a small but dedicated fan following, and there is some 3rd-party content available from download sites such as Renderosity.com, however it’s worth pointing out that content created for iClone 1 will not necessarily be compatible with iClone 2. In terms of its capabilities and the uses to which it can be put, iClone 2 is like a very simplified version of eFrontiers Poser 7. Available from online retailers for around £75 it’s also about half the price of Poser. The program is available for Windows PCs only, and requires XP, ME or 2000, as well as at least a Pentium III and 256MB RAM and 1GB of hard disk space. It also needs a 3D graphics cards with at least 32MB video memory and support for DirectX 8.1. 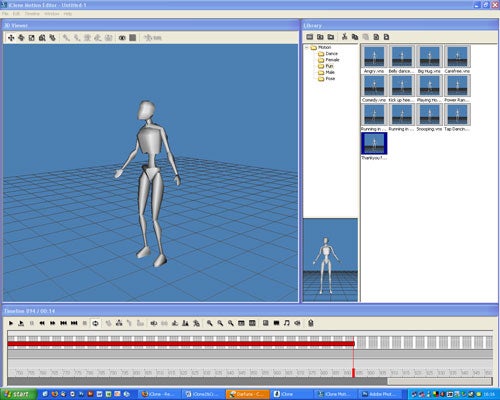 iClone 2 uses the same step-by-step approach as Face Filter Studio. The interface is very simple and uncluttered, with the various production stages divided into the seven large buttons across the top of the screen. Character and animation creation is kept as simple as possible, using libraries of pre-sets. You can simply select from a short list of pre-made characters, or mix and match from a limited catalogue of body parts such as hair, eyes and skin colour to create your own character. There are some limited adjustments you can make to your character, such as height, the size of head body or limbs, as well as vertical position, but the overall appearance cannot be altered. It’s also worth noting that you can only have one character on screen at a time. A sizable list of pre-set animated movements such as walking, sitting, answering the phone are provided, and there is a simple animation studio where you can edit these, sequence them together on a timeline and even create your own movements, although it has to be said that the editor is very basic and doesn’t provide a great deal of control, so the results may not look as good as you’d hope.

There are various 3D environments which you can use as a background for your character with a selection of props and accessories, as well as a range of pre-set lighting effects and some nice 3D particle effects for things like smoke, fire and rain. There are also various pre-set camera positions and movements. 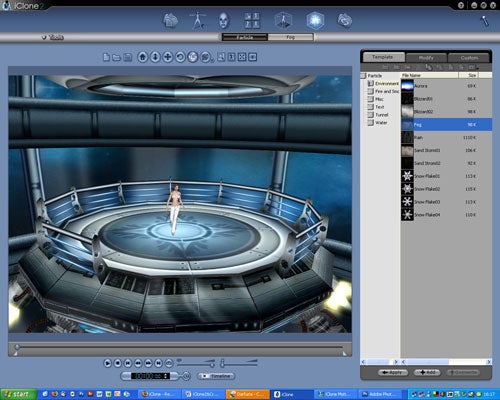 Where the digital photography comes in is the ability to import photographs into the program and use them as facial textures for your 3D character. However since there is no way to adjust the 3D facial modelling of the character, any resemblance between your avatar and yourself will be somewhat limited.

iClone 2 Studio is a fun program to play around with, and with patience it is possible to create short animated movies and 3D scenes, which can be used for a variety of purposes. The results are better than you’d expect from a relatively low-cost program, but don’t think you’re going to be creating the next Shrek film on it. If you need better quality character animation, a wider range of posing control and a lot more available content you’ll be better off saving up for Poser 7.