While iClone 2 is fun and potentially useful, the other Reallusion program I have today is without question the creepiest thing I’ve seen in months.


CrazyTalk 4 also has an even lower minimum specification than iClone 2, requiring a Windows PC running XP, 2000, ME or even 98SE. You’ll need at least a Pentium III 500MHz, 128MB RAM and 300MB disk space.


The idea is pretty simple. You import a facial portrait, which can be of yourself, any other human, and even animals, paintings or cartoon characters, basically anything with a face that includes two eyes and a mouth. The program prompts you to position four reference points on the image, at the corners of the eyes and the corners of the mouth. There are also options to adjust colour balance, exposure and rotation, but to be honest you’re far better off doing these in a proper image editing program. You can also mask out area of the image that will not be animated, and change the background and foreground colour. 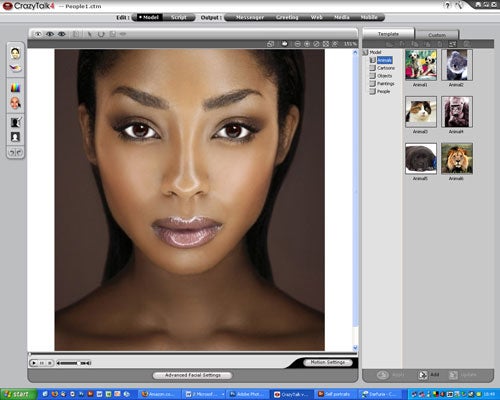 Next, you can choose a base facial expression from a catalogue of presets, some of which have crude animations or graphics attached, such as flames, steam out of the ears or clown makeup. 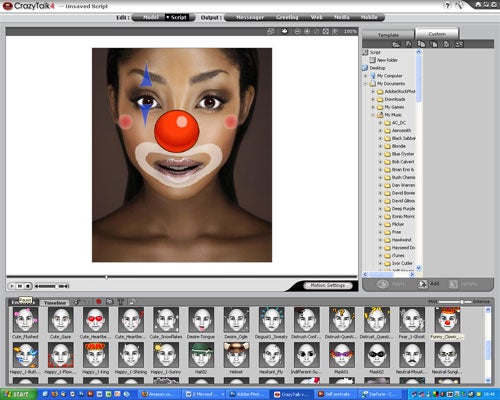 For the actual spoken words, you can import recorded sound in PCM WAV format, and only in PCM WAV format. Why it doesn’t have the ability to handle other formats, especially the popular MP3 format, is anyone’s guess. The program does however include a function to automatically convert text into speech, and to be fair it works a lot better than I though it would, but naturally everything comes out sounding like Steven Hawking.

So then you’re ready to play your animation. Even in its rest-state, the portrait moves slightly and blinks occasionally, which looks quite unnerving, but that’s nothing to what happens when you click the play button. If you are of a nervous disposition, and are the kind of person who gets nightmares after watching Dr Who, then you may want to reconsider at this point, because you may run away screaming as soon as you see what it does to your face. 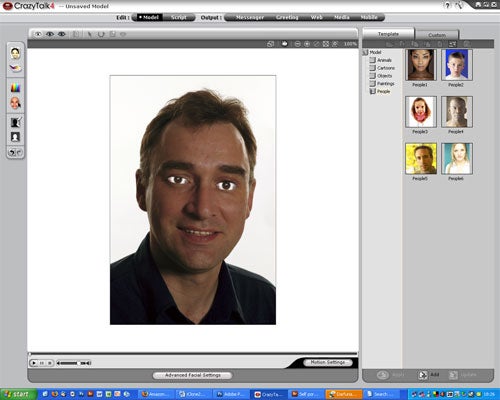 The actual synchronisation of sounds to facial movements isn’t too bad, although it produces very odd contortions for some consonants. The problem is in the way it moves. The facial animation in CrazyTalk uses the same morphing system as Reallusion’s other product Face Filter Studio 2. It simply pushes areas of the image around to produce the illusion of 3D motion, adding colour-matched eyelids for the blinking animation, but it’s what it does to the mouth that is the most disturbing. Unless your sample picture has a neutral expression with the lips closed, and preferably with the face straight on to the camera, the program often misses the mouth entirely, producing a terrifying-looking gash across the upper lip instead, with both sets of teeth attached to the lower jaw. It really is quite horrifying to see. No amount of tweaking with the available controls was able to correct this satisfactorily for the sample portrait of myself that I used to test it. It’s worth noting that the default sample picture used in the intro and on the pack art is of a very beautiful model with a perfect symmetrical face looking straight into the camera, and even her demo animation doesn’t looks all that convincing. The other sample demos, involving children and animals, are even worse.

CrazyTalk 4 costs around £30 to buy from online retailers, and to be honest I think even that is too expensive. It is of limited use, it’s almost impossible to produce results that aren’t horrifying to watch, and for a program primarily intended to match up sound with facial movement its restriction to PCM WAV files is a bizarre choice. Unless you enjoy freaking out your friends I can think of better ways to spend £30.