Update: An Rdio third party tool now lets you import Spotify and Last.fm tracklists. At this stage Spotify playlists must be imported one by one, but it is still extremely useful. Find this tool here.

Ever feel like no matter how hard you try you just can’t get your moment in the spotlight? Then you will be able to empathise with Rdio as it tries to fight the barrage of media coverage given over to chief rival Spotify. The big question is whether Rdio deserves to take centre stage…

Who Is Rdio?
Launched out of beta in August 2010, Rdio is what Skype founders Niklas Zennström and Janus Friis did next. Like Spotify, Rdio has deals with all four of the major record labels (Sony, EMI, Warner and Universal), like Spotify it offers near instantaneous streaming music on a monthly subscription format and like Spotify it is available on virtually every major PC and mobile platform. Unlike Spotify, Rdio opened first in the US and only this month did it head to the UK. 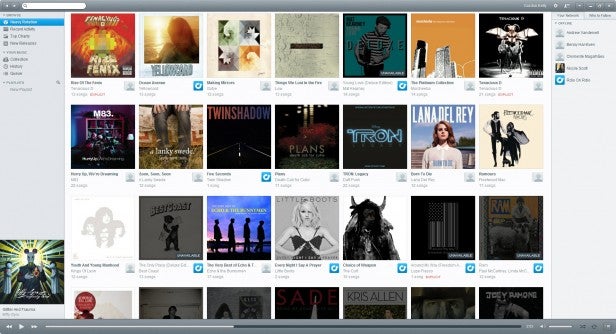 This release strategy is the primary reason for Rdio’s relative obscurity in Europe, but conversely it means the service arrives in a form just as refined and polished as Spotify when it launched Stateside last year. Crucially it also has some noticeable differences and, ultimately, a subtlety different philosophy. You won’t immediately spot these at the sign up stage. Rdio charges a Spotify-matching £4.99 per month for unlimited use of its service on a computer and £9.99 per month for unlimited use on a computer and mobile devices.

More than Playlists
From here the differences appear. Key to Rdio is your ‘Collection’, quite simply your personal music collection, which can be sorted automatically by Artist, Album, Song, Recently Added or Play Count. Any content found in Rdio can be added to your collection and it can also scan your existing iTunes or Windows Media Player libraries (much like iTunes Match) to add all matched content into your collection. This is a slick and simple way to get off to a flying start and to take the vast majority of your beloved digital music collection with you. There can be some issues with album duplication (the same album being added multiple times in different country versions or special editions), but Spotify users will be hugely jealous having cried out for an alternative to the company’s rigid playlist-only system for years. 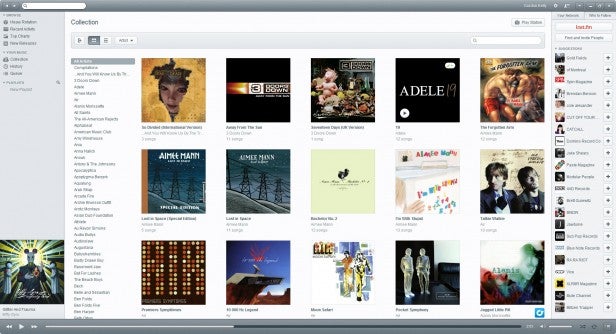 A further refreshing change is Rdio’s approach to its available content. Rdio claims its library boasts over 15 million tracks, roughly the same number as Spotify, but where there are holes Rdio still lists the album but shows it as ‘Not Available’. This is useful when discovering new artists since rival services simply omit content for which they have no licence and you are unable to get a true representation of an artist’s discography. Interestingly unavailable content can still be added to your Collection in case it is licensed in future, but it would be nice if Rdio would notify you with information specific to that when new deals are struck.

Beyond this Rdio’s functionality is very familiar: stream or download for offline listening, queue up music or create playlists, browse charts, new releases and view the most popular content and recent activity – either your own, your friends (see below) or on Rdio as a whole. 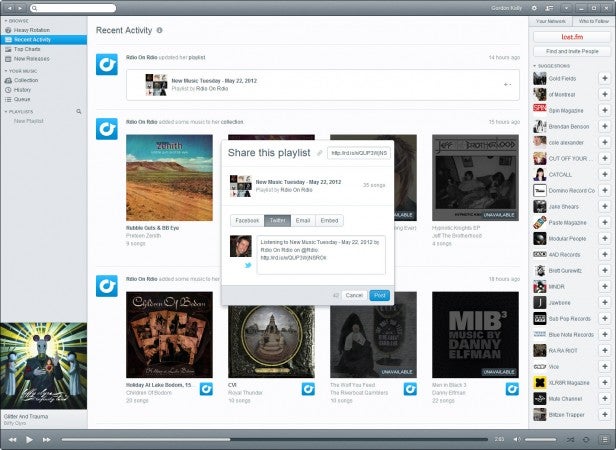 Social Media
Whether the trend for forcing your listening habits onto your friends’ social networks is a good thing or not is open to some debate, but having the option is welcome. Rdio doesn’t have a high profile Facebook partnership nor does it require you to be a Facebook member to use it, but it still connects to the social network if you choose, shows what fellow Facebook Rdio subscribers are listening to and can publish your own listening. In addition it ties into Twitter (allowing you to link Tweet with links to content) and Last.fm.

The most interesting aspect to Rdio though is its Twitter-esque ‘following’ network. Subscribers can browse Rdio users’ profiles and follow them to get an insight into their listening habits. Rdio can recommend users to you as well based upon your listening habits and there are respected titles like Spin Magazine with profiles that are a great way to discover music. We wonder if celebrity Rdio profiles will come next. Of course what Rdio lacks is dedicated Spotify-esque apps, though we still found the Rdio network an original way to broaden your musical horizons.

Apps
Your first port of call using Rdio will likely be a computer and Rdio offers both downloadable and browser-based clients. This latter aspect is a key differentiator to Spotify and alone will be a deal maker for many. Both clients look like Spotify/iTunes hybrids with a navigation column down the left, main screen for displaying search results and viewing content and a right panel for showing the activity of fellow Rdio users. So far so very normal, but we do have a gripe that the downloadable client (on both Mac and PC) is essentially a web app which doesn’t do a lot of caching so there is little speed benefit to using it which really shouldn’t be the case.

Where Rdio does excel is mobile apps. Currently it has native iOS (iPhone and iPad), Android, Windows Phone, BlackBerry, Roku and Sonos apps and where each impresses is the effort made to integrate them into the interface styles of their respective platforms. In particular the iOS versions of Rdio impress with its clean grid-like arrangement of the iPhone/iPod touch edition proving far more intuitive than the cluttered mess of its respective Spotify counterpart. In addition Rdio gets brownie points for fast syncing of offline downloads and the manner in which unavailable content in your Collection is automatically hidden when the apps are offline.

In addition all Collection and playlist content syncs across platforms through the Cloud, though like its rivals each Rdio subscription is only able to play content on a single device at any one time.

Performance
Despite being a crucial aspect to any streaming music service, it is virtually impossible to draw any universal truths about Rdio’s audio quality when compared to rival services. What we do know is Rdio offers standard and high quality streaming options, the latter up to 320Kbit but it does not reveal the bitrates for individual tracks or albums. This means we don’t know what percentage of its collection is available at what standards and with 15 million tracks available there is no way to sample a wide enough cross section.

In fairness all streaming services are in the same position and as bandwidth and storage costs are not sizeable cost elements related to a company’s overheads there is no benefit to any of them in scaling back quality. Ultimately then what we found is there were times when audio quality was truly excellent, but it could also occasionally be fuzzy and indistinct. In a direct comparison with Spotify the two traded victories fairly equally. From our samples all but the most stringent audiophiles should be pleased most of the time.

When it comes to streaming response times and reliability the picture does become clearer. Rdio cannot match Spotify’s essentially instant scanning through tracks (there is a fractional delay), but we found it streamed more reliably when on the move. Setting both Spotify and Rdio to their highest audio quality, the latter did not stutter once in areas of good signal. On the same handset and network Spotify stuttered several times. Whether this is chance or connected to the faster offline download times of Rdio (faster servers?) is open to debate.

Catalogue
15 million tracks are more than you are ever likely to listen to in your lifetime, but we did notice Rdio is particularly strong with indie and mainstream content. Having just launched in the UK weeks ago, Rdio is still signing off international agreements which gives Spotify a slight edge, though we doubt this will last long. Rdio’s seven day free trial is a wise idea for those with very specific listening tastes.

Should you change?
We suspect Rdio’s real motivation in the UK is not to convert existing Spotify subscribers, but to appeal to the majority of listeners who have yet to embrace streaming music. This is wise as the service, while a true competitor for Spotify, has enough pros and cons by comparison that in its current guise it is unlikely to cause mass defections. On the surface though Rdio is more appealing to casual consumers as it embraces existing music collections with far more grace and does not force users down a road of messy, manually sorted playlists. Rdio’s mobile apps are also every bit a match for its more famous rival with more intuitive UIs and they seem to be more regularly updated.

On the flip side Spotify still has the deeper social network integration and its steadily growing apps and high profile partners will appeal to a world that is currently app obsessed. Perhaps the biggest complement to say then is Rdio can stand toe-to-toe with Spotify and give as good as it gets. Rdio brings genuine choice to the UK streaming audio sector and that can only be a good thing.

Verdict
Rdio is every bit as good as Spotify and its browser client, more refined mobile apps, Facebook independence and acceptance of existing music collections with smart, automated sorting will win it a legion of fans. The trouble for Rdio will be converting Spotify diehards as it may not offer quite enough to convince them to jump ship and abandon all those meticulously created playlists. For those looking to try music streaming for the first time, however, the decision is now much tougher and that is high praise indeed. In fact right now if we were starting from a clean slate we’d be tempted to choose Rdio.