What is the Razer Wolverine Ultimate?

The Wolverine Ultimate is Razer’s stab at creating a pro-level Xbox One-style controller for eSports and hardcore competitive gamers.

At first glance it may not look like it offers much over the moderately cheaper official Xbox One Elite controller. However, following a solid month with the Wolverine I can confirm it’s one of the best on the market – if you can put up with the lack of wireless functionality.

Make no mistake, when it comes to performance the Razer Wolverine is the mechanical keyboard of game controllers, and perfect for serious console and PC gamers. You’ll just have to pay through the nose for the privilege of owning it. 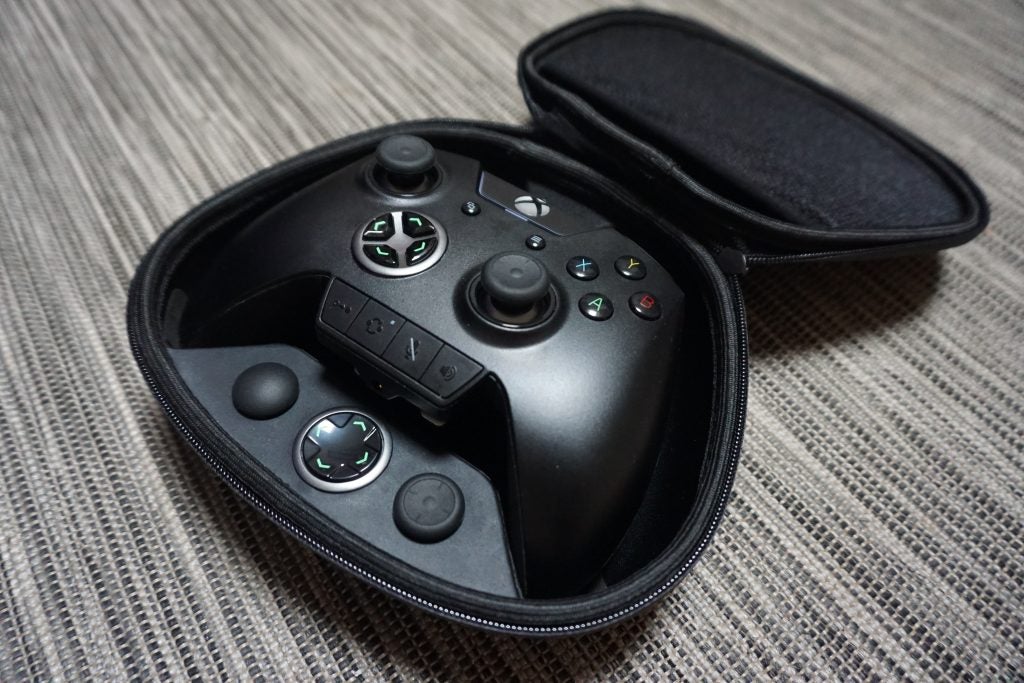 The Wolverine Ultimate looks like a dolled-up, space-age version of a regular Xbox One controller. But in-hand it’s a different beast altogether.

For starters, there’s Chroma RGB lighting on its front and a shed-load more buttons than a regular Xbox controller. Specifically, on its rear you’ll find two re-mappable bumpers and four additional triggers. The full pack provides a greater number of programmable keys to play with than the Xbox Elite, which supports a maximum of four additional back paddles. The bumpers also feature a nifty switching mechanism on their back, which lets you reduce the level of travel needed to press them – another key feature that eSports and competitive gamers will love.

At the bottom, you’ll find a four-button quick-control panel that lets you switch presets, RGB light modes and turn the mic and in-game audio on or off. Like the Elite, the Wolverine comes with interchangeable thumbsticks and two interchangeable D-pads; these let you change the height, thickness and layout of the controller to meet your needs.

To hold, the controller feels much like the Elite. The back handles have a slightly rubberised, textured finish that allows you to achieve a more solid grip than a regular Xbox One controller, even when you’ve adjusted your fingers to cover the extra controls. During a heated Dragon Ball FighterZ session, where my hands were more than a little clammy, I was able to maintain a decent grip on the Wolverine and take advantage of its extra functions without much issue. Any errors were human, not mechanical.

Having witnessed a rampaging three-year-old protest the absence of Disneyland Adventures in my games library by sending the Wolverine flying across the lounge onto a hardwood floor, I can also attest to its build quality. The controller survived the experience, which separated it from its USB cable, scratch- and blemish-free.

The only annoyance was that the impact proved too much for the magnets used to dock the detachable D-pad and joysticks, sending them flying off the main body. Fortunately, they clicked back into place easily enough and remained firm despite the ordeal. All in all, the Wolverine will happily survive the occasional rage throw.

My only real quibble with the design is the lack of battery pack wireless functionality. Competitive gamers are unlikely to consider sacrificing the improved responsiveness of a cabled connection, and the omission is understandable given the Wolverine’s overt eSports focus. But I still can’t help but feel its absence when lounge gaming. Even eSports pros and serious gamers like to kick back on occasion and game from their sofa, and it would be nice if the Wolverine could accommodate such play in the same way the Elite does. 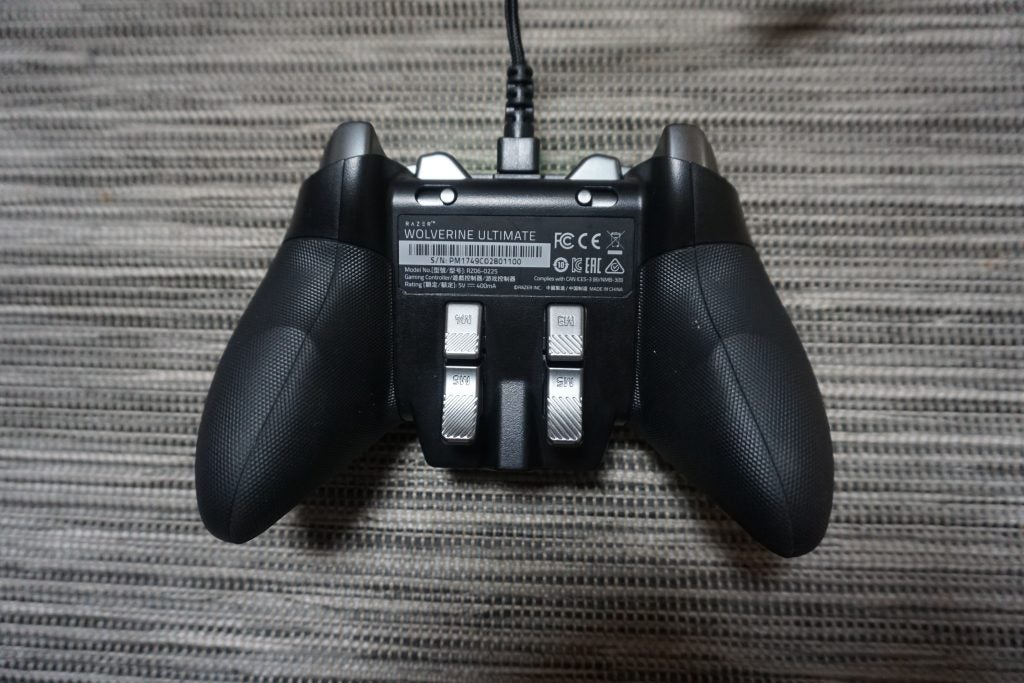 The Wolverine can be programmed in part using its physical controls, but to get the most out of it you’ll have to use Razer’s Synapse software. Synapse is available on PC and Xbox One, and offers a pretty much identical set of features on both platforms – although the PC version has a slightly more intuitive UI.

You can create up to 500 profiles, with specific configurations for the extra keys, RGB lighting, joystick sensitivity and haptic feedback levels. The idea is that, like a gaming keyboard and mouse, you can set the Wolverine to work with a game’s control system. The system works well enough, with each setting adjusted using an on-screen slider. The feature is a godsend for games with complex control systems such as fighting game Dragon Ball FighterZ, and competitive shooters such as Player Unknown’s Battlegrounds.

In FighterZ, for example, by reducing the haptic feedback intensity and mapping the extra controls to my preferred character’s move list, I was able to quickly and easily improve my online win rate. I’m fairly certain I reduced another player to tears at one point.

The controller’s stellar button switches further improved my performance. The Razer Wolverine’s keys, triggers and switches are a marked step up compared to regular Xbox One controllers. The X,Y,B, A controls display significantly shorter travel and a pleasing click that makes them feel more like a mechanical keyboard key than a gamepad button. The triggers also have a rear switch mechanism that, when activated, radically shortens their travel – a godsend in games where reaction time is key. The end result is one of the most responsive gamepads I’ve ever tested.

My only minor issue with the Wolverine is that I found things can easily become confusing when using any more than four to five profiles. This is because the custom RGB lighting Razer bangs on about applies only to a front strip. Unlike gaming keyboards, you can’t map it to specific keys.

This means that the only obvious indicator of the profile you’re in comes from the front lighting. Although in theory there are more options than you can shake a stick at, I found the only way I could obviously mark each profile was to lock the lighting to one colour: red for Dragon Ball, blue for Player Unknown, yellow for For Honor, and so on. After that, cycling through became confusing and I’d regularly start a new game with the wrong profile loaded, leading to some embarrassing defeats. 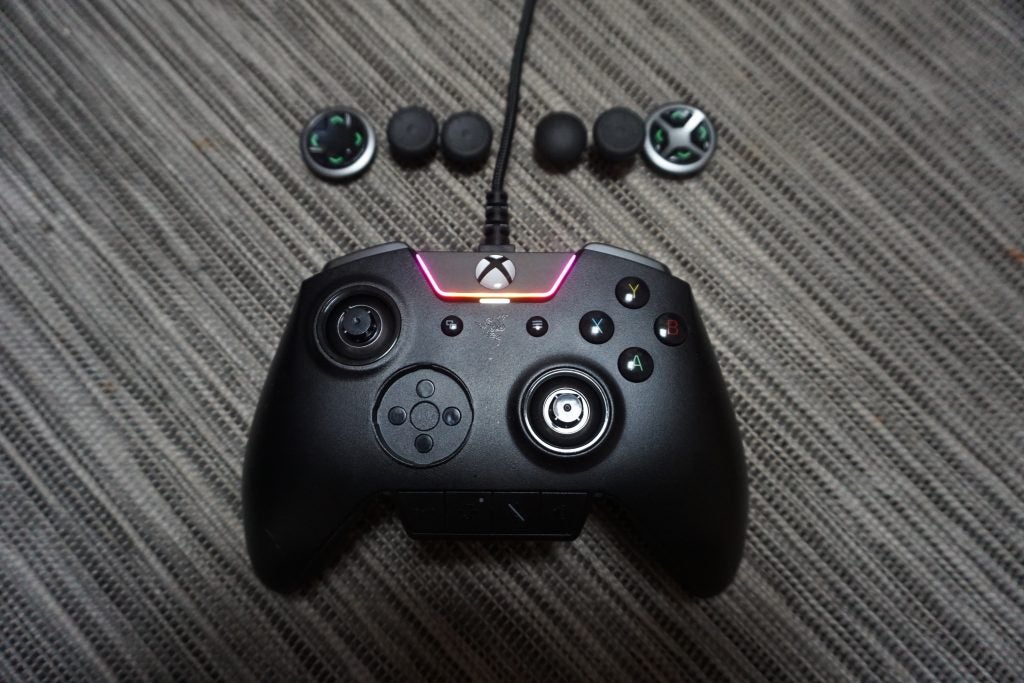 Why buy the Razer Wolverine Ultimate?

Featuring wonderfully responsive controls, a wealth of mappable custom keys and paddles, and a rugged design that will survive the occasional rage throw, the Wolverine Ultimate is a perfect buy for any competitive PC or Xbox One gamer.

But the lack of wireless support and the high price make it a less appealing option for more casual players, or anyone who mainly games in their lounge. Those people should consider the Xbox One Elite controller, even though it doesn’t quite match the Wolverine’s performance.

It’s expensive, but you won’t find a better PC or Xbox One controller for competitive gaming.