The introduction of Razer's new HyperSpeed wireless technology and Focus+ optical sensor offer the Razer Viper Ultimate legitimate potential of becoming the very best gaming mouse for e-sports. Gaming peripheral manufacturers have long attempted to close the performance gap between wired and wireless mice, and Razer may have just done it with this record-smashing mouse.

What is the Razer Viper Ultimate?

The Razer Viper Ultimate is a new wireless mouse aimed at e-sports, with Razer claiming its new HyperSpeed wireless technology is a significantly superior alternative to Bluetooth in terms of speed, reliability and accuracy.

The Razer Viper Ultimate also comes with a slew of new features including smart tracking, asymmetric cut-off and motion sync, while borrowing other successful innovations from other Razer peripherals such as optical switches.

Designed especially for e-sport players, the Viper Ultimate sees the same streamlined form as the wired Razer Viper, cutting off any excess fat or buttons to see the weight fall to a feather-light 74 grams. Factor in an impressive 70-hour battery life, and the Viper Ultimate is shaping up to be an extremely good wireless option for competitive gamers.

I went hands-on with the new peripheral to see whether those incredible specs can equate to an incredible performance.

Razer Viper Ultimate Price – How much will it cost?

The Razer Viper Ultimate retails for £149.99 in the UK, €159.99 in Europe and $149.99 in USA. You also get the Razer Mouse Dock bundled in the box – a docking station equipped with RGB Chroma that can recharge the wireless mouse.

Razer Viper Ultimate Release Date – When can I buy it?

The Razer Viper Ultimate is available to buy right now from the official Razer store online, as well as authorised resellers. 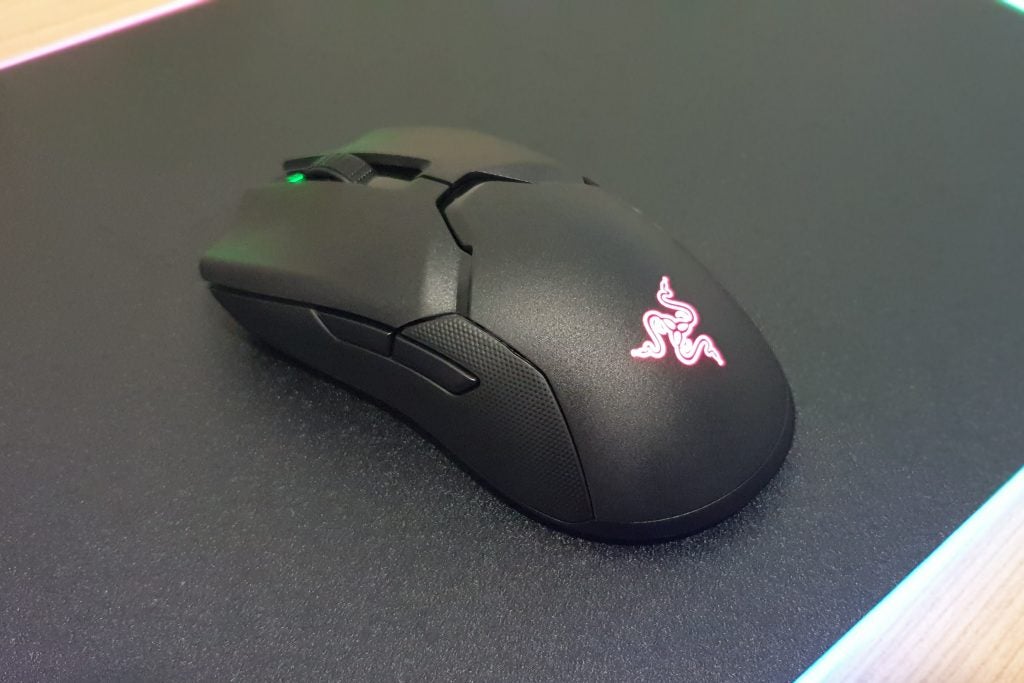 Razer Viper Ultimate Design – How does it look?

The Razer Viper Ultimate sports a simplistic design, prioritising performance over fashion. In fact, it  looks pretty much like a traditional gaming mouse, with the green Razer logo slapped on for good measure.

You could accuse the Viper Ultimate of looking somewhat plain, but there’s a good reason for this. Razer has chopped away all the needless plastic to make its e-sports focused peripheral as light as possible.

The Razer Viper Ultimate weighs 74 grams, which admittedly doesn’t make it the lightest gaming wireless mouse, but it at least undercuts the the 121g heft of the Viper Ultimate’s closest rival, the Logitech G Pro Wireless.

Importantly, the Viper Ultimate feels really comfortable in my hand, and not having a cable connected is as freeing as ever. The casing is made out of plastic, but certainly still feels premium. This mouse flaunts class in every department.

There are eight programmable buttons on the Viper Ultimate – two optical switches up top, two extra buttons on each side and the DPI switcher underneath. Razer representatives explained the DPI switch has been moved to the bottom to prevent accidental knocks mid-game, which I think is a very sensible move and looks to be growing trend across the market.

Razer Chroma RGB lighting is of course still present, boasting 16.8 million colours, but is far more understated than consumer-level gaming mice. It’s only the Razer Logo that glows, and even that can be turned off via the Razer Synapse app if users find it distracting. 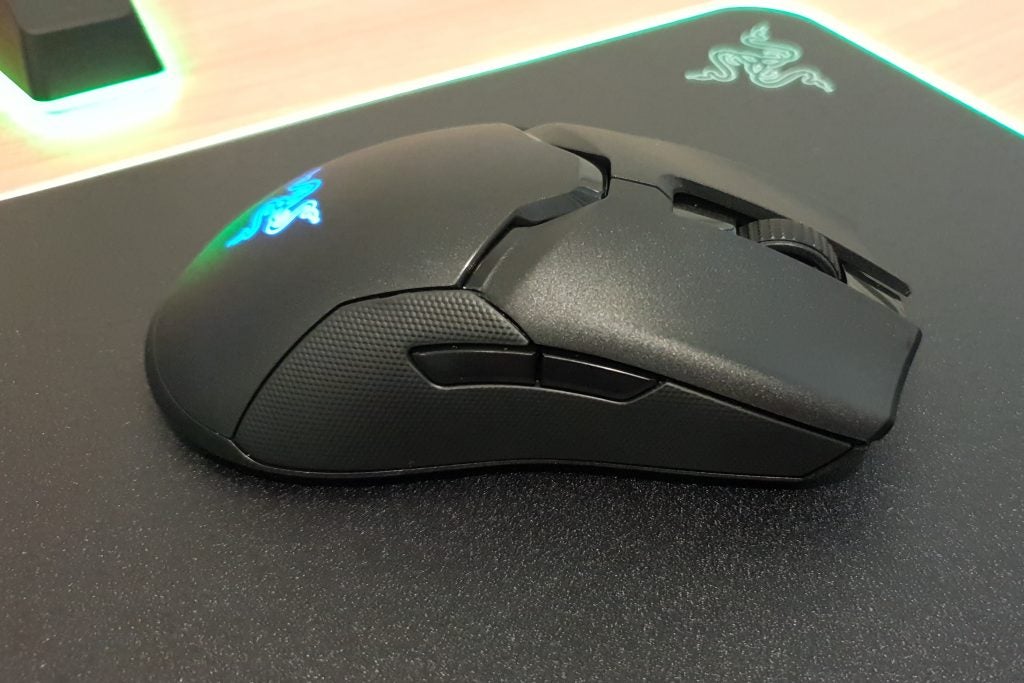 Razer Viper Ultimate Wireless Performance – What is it like to use?

Razer has concentrated its efforts into making the Viper Ultimate the absolute best performing gaming mouse in the e-sports market, and on first impressions, it’s done an outstanding job.

There’s a couple of headline specs and features here, but the most noteworthy is Razer’s new HyperSpeed technology. Gaming manufacturers have realised Bluetooth has been throttling the performance of gaming mice, with the latency and accuracy not quite high enough to compete with wired peripherals.

In order to overcome this hindrance, Logitech developed its own ‘Lightspeed’ wireless innovation, gifting its peripherals a massive advantage over competitors. Razer has finally hit back with it own wireless solution, introducing ‘HyperSpeed’ to the Viper Ultimate.

Razer suggests HyperSpeed is 25% faster than other wireless technologies – a bold claim given the success of Logitech’s Lightspeed. HyperSpeed connectivity gives the Viper Ultimate an excellent and stable 998Hz polling rate, which effectively means the mouse is reporting its position to the computer every millisecond for pin-point accuracy.

Razer demonstrated (with benchmark software it had developed itself, admittedly) that HyperSpeed boasts an even more stable performance than a wired Logitech rival. Razer did admit the difference was so negligible a human wouldn’t notice the difference, but it’s still remarkable to see its mouse offering a wireless performance equivalent to a wired connection.

Playing a few rounds of Counter-Strike: Global Offensive, it was genuinely difficult to tell the difference between the Viper Ultimate and a wired mouse – I even found myself winning more 50/50 shootout duels than usual. So, you’re not sacrificing performance at all by cutting the cord.

HyperSpeed is also claimed to offer the lowest click latency and fastest transmission speeds found in any other gaming mouse. Couple that with the optical switches underneath the right and left clickers, which are apparently three times faster than the mechanical counterparts you usually find in gaming mice, and the Razer Viper Ultimate is a supremely responsive device. 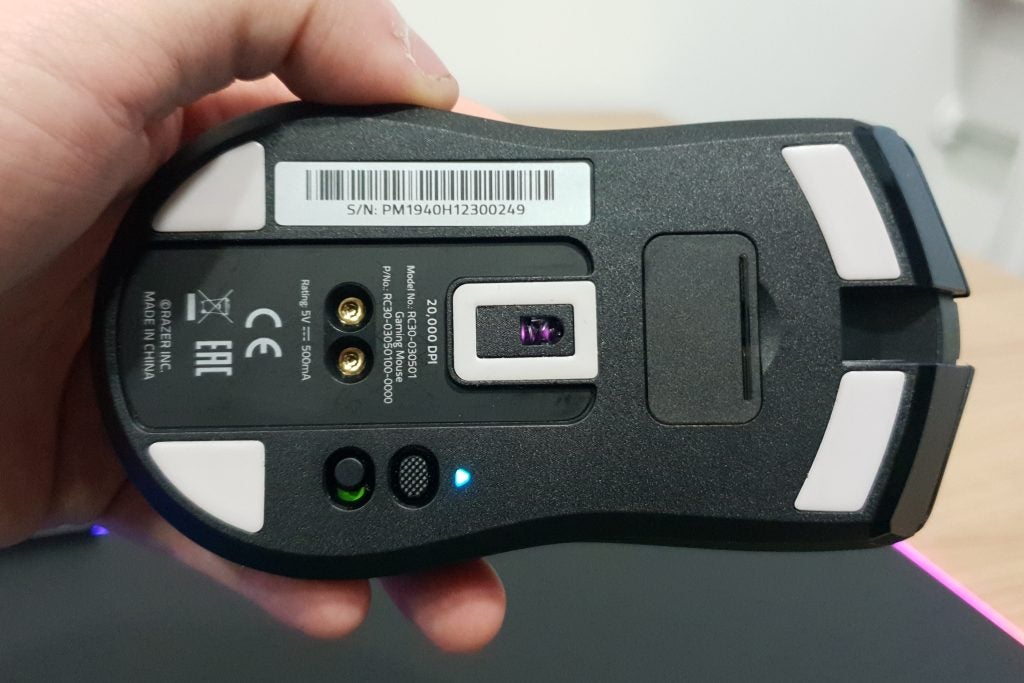 The Razer Viper Ultimate also has the privilege of being the first gaming mouse to own Razer’s new optical sensor, the Focus+. The benefits this brings to Razer’s mouse include the industry’s highest DPI sensitivity and inches per second performance.

With a whopping 20,000 DPI (dots per inch), the Viper Ultimate is the world’s most sensitive gaming mouse. This is an impressive record, but by Razer’s own admission, this isn’t as big of a game-changer as you might expect, with the ideal sensitivity level for gamers said to be around 800-1600. I suppose it’s nice to have the option though, even if 20,000 is very much overkill.

The Focus+ 650 IPS (inches per second) score will be far more influential on your gaming performance, referring to the maximum speed you can move the mouse before the sensor’s tracking ability starts to suffer. Razer claims this is the best IPS figure you’ll currently see in a gaming mouse, with the second best alternative limited to 450 IPS. In real-time performance, this means you’ll be able to make quick, sudden movements – such as rapidly turning your sniper rifle for a perfect headshot – without fail.

Razer’s new Focus+ sensor also allows for some super-smart features. The first is smart tracking, which eradicates the need for calibration every time you switch surfaces (mouse mats, hard desk, etc), as the Viper Ultimate can detect what type of surface it is sitting on and ensure lift-off distance and accuracy remains consistent.

Razer now gives you the option of manually changing the lift-off distance too, so you can decide exactly how close (between 1mm and 3mm) you want the sensor to be able to detect the surface. Ideally, you’ll want this to be at its absolute lowest point, preventing accidental movement when adjusting the position of the mouse. With on-board storage for up to five profiles, the Viper Ultimate can save all your settings too, so you don’t need to dive back into Synapse everytime you switch PC.

The final feature provided by the Focus+ sensor is Motion-Sync. Razer says this improves tracking accuracy by ensuring the information sent from the mouse to PC is relayed at the correct intervals. Razer presented a diagram showing the Focus+ flaunts better accuracy than Logitech’s Hero sensor. Again, the difference is marginal to say the least, but Razer was keen to remind me every little advantage counts when it comes to competitive gaming. 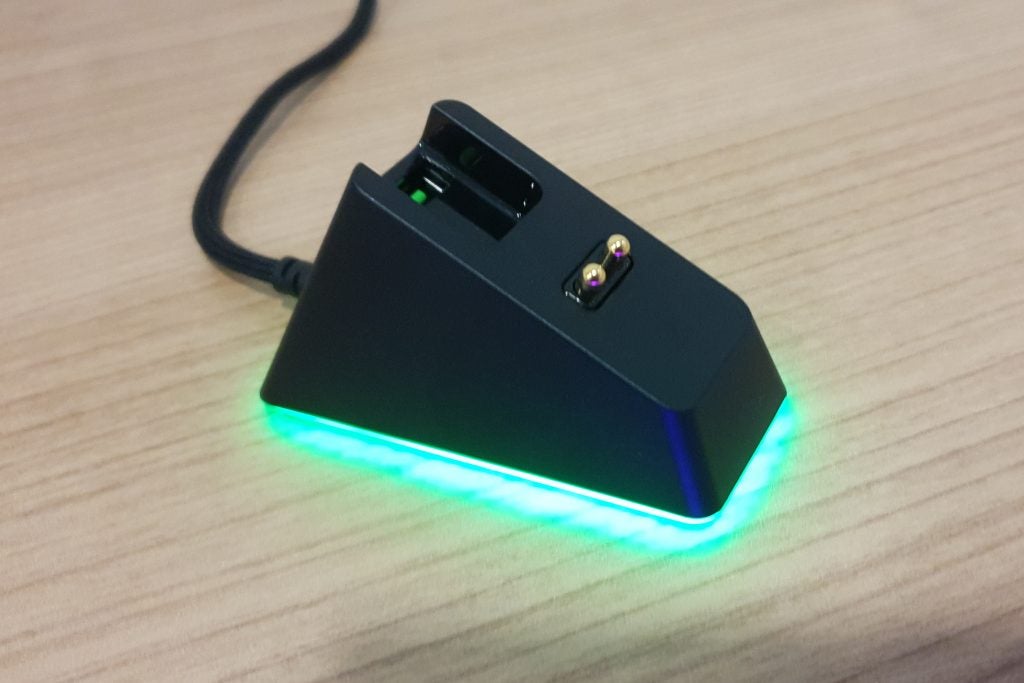 Razer Viper Ultimate Battery – What is the battery life like?

Razer claims the Razer Viper battery life can last up to 70 hours – that’s with the RGB lighting turned off though, so expect the figure to be noticeably smaller if you’re unwilling to sacrifice the lightshow.

I was unable to test how accurate Razer’s battery claim is, since I was only given a few hours with the peripheral at Razer’s HQ office. I already have a review sample though, so watch out for our final review and verdict soon.

The Razer Viper Ultimate comes bundled with a Razer Mouse Dock. This plugs into your computer via USB, and allows you to slot the mouse on top for a recharge. You obviously won’t be able to play with the mouse when it’s docked, but it’s also possible to plug in a charging cable if you really don’t want to stop gaming.

The Razer Mouse Dock also offers a passthrough port to slot the mouse’s USB dongle. It’s a subtle feature, but ensures the Viper Ultimate never has to occupy two of your systems ports simultaneously.

The dock looks really cool and stations the mouse securely via magnets. The bottom rim of the dock features RGB lighting, and changes colour to reflect the battery status of the mouse. It’s a neat feature, and a good compromise for those who don’t want an on-mouse colour alert to displace their carefully curated RGB light profiles, but still desire updates on how much juice is left in the tank. 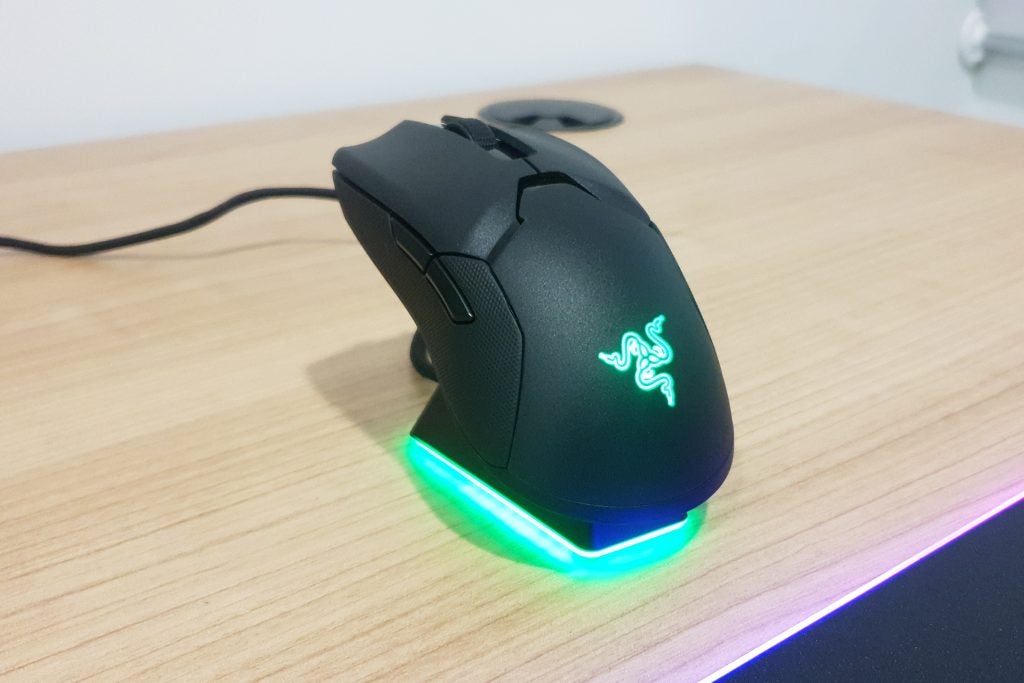 Having played a few rounds of Counter-Strike and seeing several performance demonstrations from Razer, I’ve got extremely high hopes for the Razer Viper Ultimate. If Razer’s bold claims for its new optical sensor and HyperSpeed wireless technology are true, then this mouse looks to be the best performing option for e-sports with seemingly no sacrifices made at all to go cordless.

Factors such as battery life, durability and performance consistency need to be judged before a final verdict can be made whether the Viper Ultimate merits its steep price, but the spec sheet and feature list certainly suggests the Razer Viper Ultimate could be the very best wireless gaming mouse for competitive gaming. With a review unit in hand already, expect our final verdict very soon.