The Razer Raiju Ultimate will be complete overkill for most . But for hardcore players that want full control the Raiju Ultimate’s feature set is excellent and easily matches key rivals, like the Xbox Elite and Astro C40 on performance. The only serious drawback is that it’s excruciatingly expensive.

It targets the same hardcore market as the Xbox Elite Wireless Controller Series 2 and Astro C40 and is being marketed as the ultimate weapon for budding esports athletes and hardcore PS4 competitive gamers.

The Ultimate certainly lives up to its name on paper, featuring a wealth of thumbstick and D-Pad customisation options and more custom switches and additional buttons than you can shake a stick at. This plus its programmable software, which makes it quick and easy to make game-by-game profiles, make it an excellent option for very, very, very hardcore gamers.

But it’s hefty upfront price and slightly flaky wireless functionality makes the Raiju Ultimate complete overkill for everyone else. Most people will be better off saving their money and opting for the regular DualShock 4, or Razer’s cheaper, stripped-down Raiju Tournament. 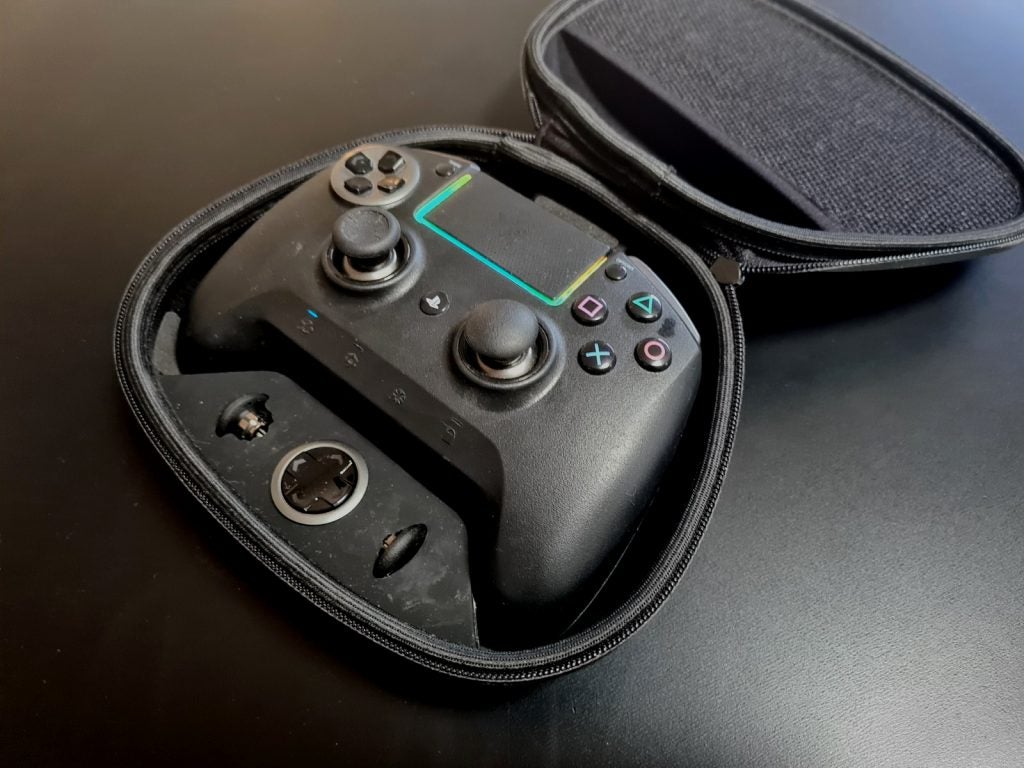 The Raiju Ultimate has an atypical, distinctly Razer design. It looks like what would happen if the Xbox One controller and PS4 DualShock had a baby.

The shape of the controller is distinctly Xbox-like, while the button, D-Pad and thumbsticks are firmly arranged like a DualShock. This in my mind is no bad thing as it means the controller is noticeably more comfortable to hold than a regular DualShock.

Outside of this, it ticks all the boxes expected of a professional game controller featuring a variety of customisation options and extra inputs.

Out of the box you can choose from a variety of different thumbstick and D-pad options. The sticks include differing heights and convex and concave tip options. Picking the right one for you is essential as the added comfort the right configuration it brings is palpable. Experimentation is also quick and easy as the parts are locked using a magnetic docking system, so it only takes seconds to swap out components.

I personally prefer the added stability of a screw system, like the one seen on the Astro C40, as a result. I’m also a little sad that, again like the Astro, you can’t swap the placement of the left thumbstick and D-pad to give the controller an Xbox-like layout, but this is a very small quibble. Build quality is otherwise excellent. The Ultimate easily survived the rage throws of an irate teenager suffering an ongoing CoD losing streak.

The extra programmable keys are another esports focused addition. Up top and around the back you’ll also find additional M1, M2, M3 and M4 keys. M1 and M2 are top facing additional shoulder buttons. M3 and M4 are paddle inputs that sit next to the regular triggers.

The paddles’ large size is a minor annoyance as it’s all too easy to press them accidentally during heated online sessions. But for the most part, the extra inputs are useful, especially in genres like ARPGs, MOBAs and shooters. The inclusion of switches to lower the regular triggers actuation point is particularly great for the latter.

Rounding off the extra inputs, there are basic RGB, profile settings and media keys lining the Ultimate’s bottom. I’m not super fussed about RGB lighting, but on the Raiju it’s useful, as it lets you match profiles to specific colours, so you know which one you’re using at any one time. 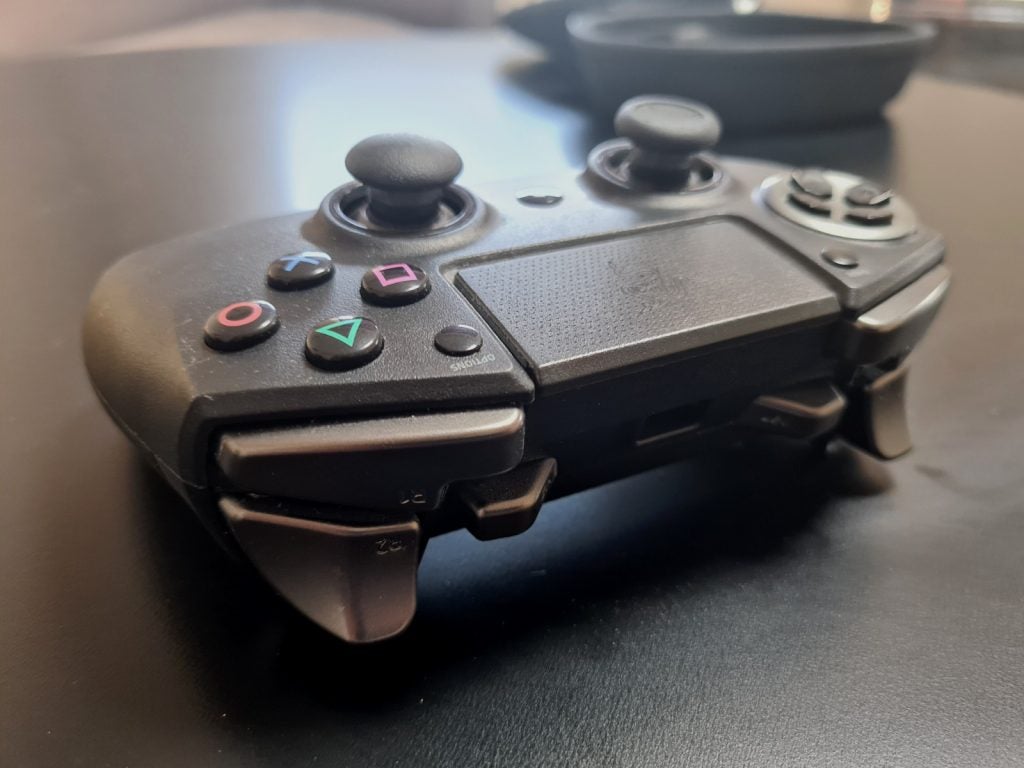 Software – Simple, intuitive and works on iOS, Android and Windows

Customising the pad’s inputs and lighting is also wonderfully simple thanks to its mobile app and Chroma support. The software works on iOS, Android and Windows and lets you control everything from what colour the light displays to the intensity of the controller’s haptic feedback, as well as the button’s settings.

The system is about as intuitive as you’ll find. My only minor quibble is that you can only remap the M-buttons, not the regular controls. Though this is fairly common on most esports controllers. The only other controller I’ve seen do this well is Valve’s Steam controller, which comes with its own set of issues.

Wired performance is excellent. The custom thumbsticks and controller’s rubberised back make it quick and easy to get a solid hold on the Raiju, even during heated, sweaty online matches. The buttons also have a much more tactile, responsive switch mechanism and shorter actuation point than the regular DualShock and Xbox pads.

There are some issues using the Raiju wirelessly, however. The Raiju Ultimate features Bluetooth 5.0 wireless connectivity. This should be okay, albeit not as good as proprietary or 2.4GHz connection like the ones seen on the Xbox Elite and Astro C4. But with prolonged gaming sessions, I regularly saw latency creep in.

For a controller being marketed at esports professionals and hardcore gamers, that’s a huge issue. Thankfully, the two markets generally will always favour a safer wired connection for this reason, so it’s not a complete deal-breaker. It will be a huge annoyance for casual buyers, especially considering the controller’s hefty cost, however. 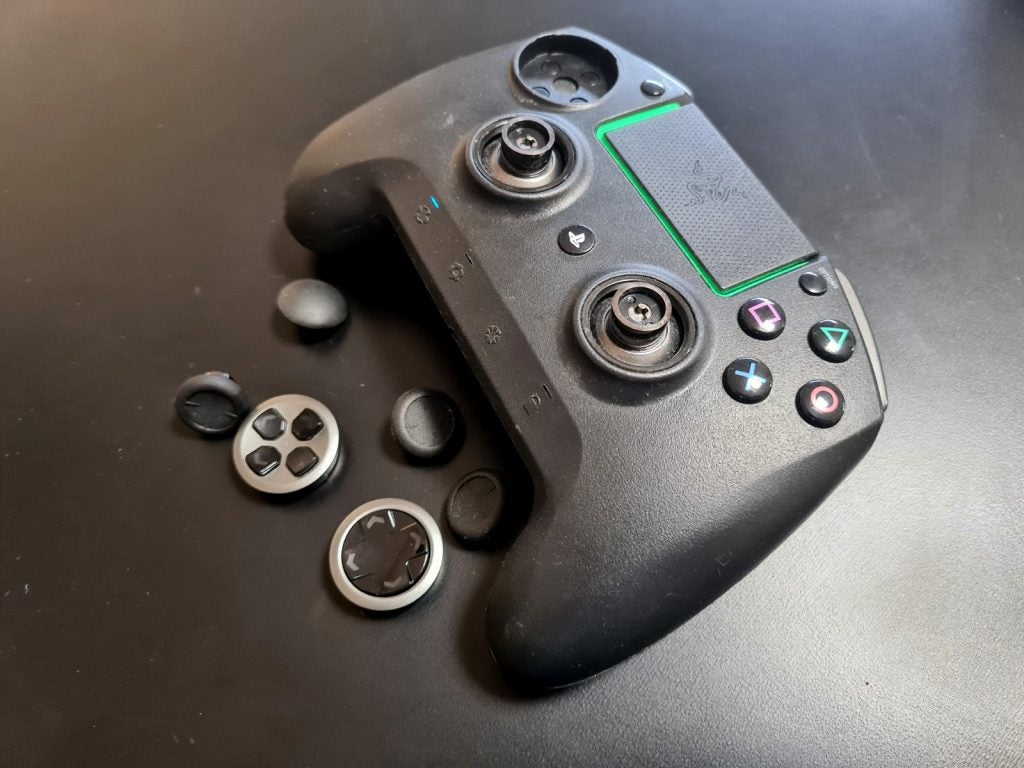 Should you buy the Razer Raiju Ultimate Edition?

If you’re a budding e-Sports player or hardcore gamer happy using a wired connection, then the Raiju Ultimate is a solid option. It features an easy to use magnetic customisation system, super intuitive button mapping software and is one of the sturdiest built pads I’ve tested. Its hefty upfront cost and slightly patchy wireless performance make it a poor choice for more casual lounge gamers, however.