Razer is an interesting company. Known primarily for its plethora of excellent gaming mice and peripherals. However it has recently started to make inroads into new markets, with products like its Mako 2.1 speakers, which are still in development.


It’s also known for having a fanatical fan base, a fact I found out for myself when coming across the Razer booth at CeBIT this year. At the time there was a massive crowd of people surrounding the booth, all with hands in the air chanting “Razer” with increasing enthusiasm in a scene rather akin to 1984. There were so many people that I never found out what was actually going on in there, though handing out free swag seems like a logical conclusion. 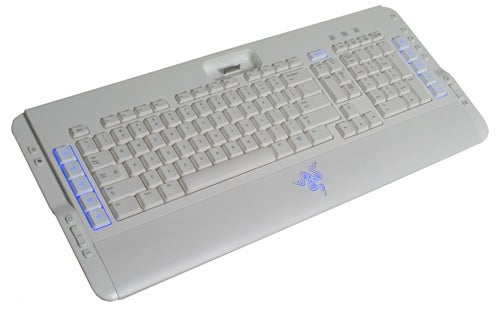 This Pro|Type keyboard is part of a range Razer calls Pro|Solutions, a range aimed less at gamers and more at general and professional users with a particular focus on Mac users. The white styling is certainly a pointer to this influence, indeed if any other clue were needed the whole range was launched at the MacWorld Expo in Boston.


Initial impressions of the keyboard are certainly favourable. Although black is making a comeback these days, white is still in vogue, and it certainly does no harm to the styling. This is supplemented by programmable keys on the left and right which are backlit blue, while a Razer logo on the wrist rest also gently pulsates with a blue backlight. It’s all fairly subtle, adding a nice bit of colour so as to not make things look too sterile. 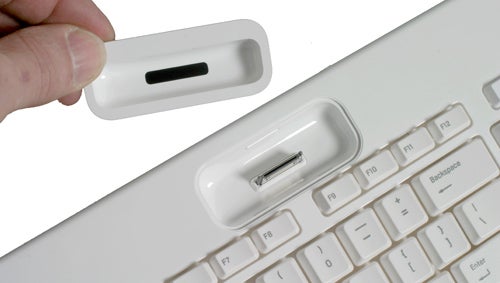 To add to the Apple loving the Pro|Type also features an iPod dock for all those Apple fanatics and iPod owners – of which I’ve heard there are a few. The dock adds support for third generation players upwards, with fourth generation players using adapters. There’s also support for both iterations of the nano and the Mini, although the Shuffle is obviously not on the menu.


As a result of the dock the keyboard has two USB plugs, one for the keyboard and one for the dock which will also charge an iPod when plugged into it. Razer has also added a line-out onto the keyboard, which provides superior audio quality to a headphone socket. One slight oversight, however, is the lack of any volume control for the line-out, thus if you use headphones you’ll need inline volume controls to adjust the volume since the iPod controls do not work when using line-out.

I also found that the connection can be a little finicky, and one does have to find the knack of getting an iPod to sit correctly. That said, this isn’t necessarily a problem with the keyboard and once you’ve got the idea there’s no great problem.


Further connectivity is provided by two USB ports, though neither is powered and both are only USB 1.1 compliant. These means you can’t use USB memory keys in them, though they are useful for such things as wireless mouse receivers or connections for other devices. 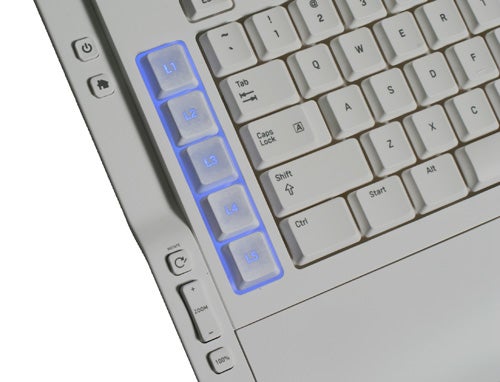 One of the pleasing things about the Pro|Type is the layout. Whereas many keyboards have media keys all bunched along the top, the Pro|Type has them sitting unobtrusively along each side. On the left is Power/Stand by and Homepage buttons, while further below these are image editing buttons with Rotate, Zoom and 100 per cent buttons to be used in conjunction with your chosen image editor.


Along the right edge are media control keys, for launching and controlling your chosen media player. The usual collection of Play/Pause, Stop, Next and Previous are all accounted for, along with Volume Control, Mute, and a Shuffle button. All these buttons are fairly diminutive, but they all have a quality feel to them – as does the whole keyboard. 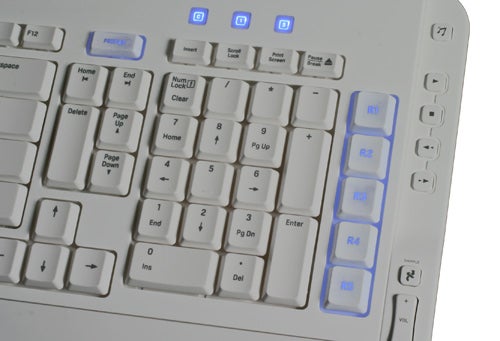 Typing on the Pro|Type is a very pleasurable experience, with light, crisp and even keys that make long days of typing – of which there are many in the TR offices – easy and painless. Everything is nicely proportioned, keys are full sized but half the depth of the standard desktop variety, thus placing them somewhere between full sized desktop keys and laptop style ones like those found on Logitech’s diNovo Edge.


The Pro|Type also features ten programmable keys split into sets of five on the right and left of the keyboard. These can be programmed to open programs, or perform certain functions and shortcuts and the software allows for up to ten macro profiles. This means you can setup macros for specific programs and have them activate automatically when that program is launched or is active.

The macro setting is a nice touch, and you can switch manually as well by holding down the Profile button and pushing the corresponding function key. As ever, many people may find little recourse for making macros but for those that do the Pro|Type will do the job nicely.

Currently the Pro|Type is only available in North America via Razer’s online store for $129.99, but Razer will ship worldwide to those that are interested. Naturally this will mean a US style keyboard layout, as found on our review sample. No specific UK pricing has been announced, though Razer has told us it will retail in Europe at €129.99 and be available from June this year. It’s also worth noting that, for a limited time only, Razer is giving a 50 per cent discount on other Pro|Solutions products when ordering a Pro|Type keyboard.


At these prices it certainly isn’t cheap, and neither is it small measuring 51cm wide and 22cm deep. These two factors are probably the main stumbling points. To begin with for the price you must want the iPod dock, because you are paying a premium for that feature, but for me bulkiness is the more pressing concern. 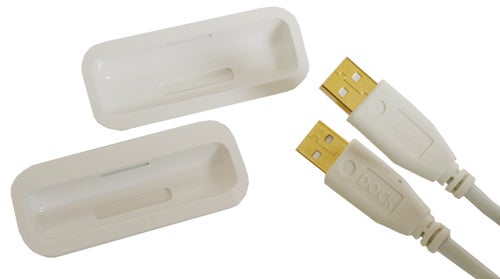 It has often been the case that this, not the smart styling, has been the first thing to catch people’s eye while the keyboard has been sitting on my desk. This is especially applicable to Apple users, who found the domineering stature at odds with the normally small and tidy Apple products they prefer. It’s a shame too because if you can get past the size, the Pro|Type is undeniably a stylish and well made piece of kit.


There’s much to like about the Pro|Type, but the domineering size and high price mean it won’t be for everyone. That said if the idea of an iPod dock on your keyboard appeals then this is a great option because despite its size, it’s still a great looking and well made keyboard with some solid features.