Razer has packed its phone with a huge 4000mAh battery, meaning it’s part of an exclusive club along with the likes of the Huawei Mate 10, Huawei P20 Pro, Samsung Galaxy Note 9 and Pocophone F1. In theory, it means the Razer Phone should offer above average battery life.

Gauging exact performance is difficult, since how much power your phone consumes is largely determined by the setup of the phone’s screen. If you crank up the refresh rate to max and spend hours on end gaming then it’s likely to die pretty fast.

If you run the Razer Phone using its out-of-box settings – which doesn’t supercharge every game’s performance and floats the handset’s screen at the bog-standard 60Hz most of the time – then battery life is good enough, albeit a smidgen lower than I expected.

I initially used the Razer as my main work and personal phone for more than a week, and generally saw it last a day and a half – pretty par for the course for a current-gen flagship. Regular use entailed listening to music on the way to and from work, sporadic web browsing, consistently checking email and social media feeds, plus an hour of gaming and video streaming.

As is the case with all phones, intensive tasks will put a bigger drain on the battery. Streaming video with the screen at around 70% brightness, the Razer Phone lost an average of 10-15% per hour. This is pretty good, albeit a little below the aforementioned Mate 10, which lost around 10-12% running the same test.

Gaming, as always, puts an even bigger strain on the battery. Running Riptide GP2 without a performance boost saw the Razer Phone lose around 20-25% of its charge per hour.

Pushing performance using the booster setting further increased battery drain. With all the settings cranked up, I managed to work through nearly half the Razer Phone’s charge within an hour playing the Arena of Valor MOBA. 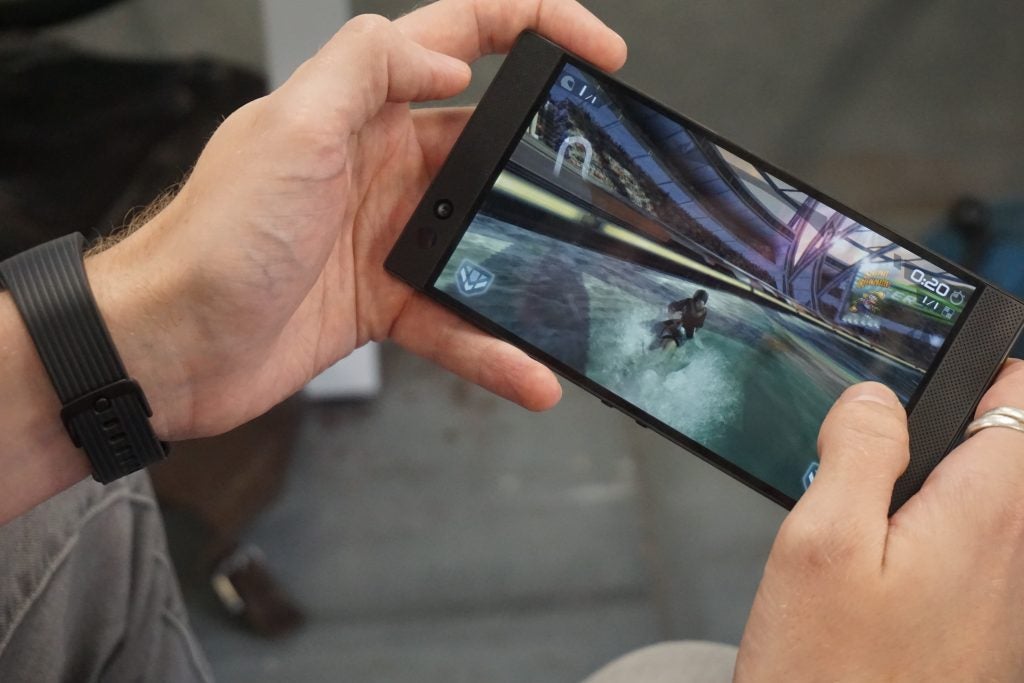 Why buy the Razer Phone?

If you’re a Razer fan on the market for a phone to match your gaming laptop and accessories, the company’s first handset is an appealing addition.

Offering speedy performance, near-clean Android OS, a cutting-edge screen and the best speakers I’ve tested on a smartphone, the Razer Phone is also a solid choice for many non-gamers – especially when you consider the fact it’s a good £100 cheaper than most other flagships.

Its only real shortcoming is its sluggish camera, which doesn’t match that of significantly cheaper phones such as the OnePlus 6, let alone top players like the Google Pixel 2. Considering the number of folk using their phone as their primary camera these days, this is a big sticking point that will likely put many buyers off the otherwise excellent Razer Phone.

The elephant in the room is the heavily-rumoured Razer Phone 2, which a year on from the original’s launch is expected to offer more speed and fix some of its predecessor’s shortcomings.

The Razer Phone is still a fantastic handset that makes the case for smartphones including variable refresh rate screens. It’s only a shame the camera falls way short of expectations.