Few questions divide opinion among the gaming community more than which is the best gaming mouse. Different shapes, weights, DPI settings, tracking technologies; all of these are up for debate though ultimately are down to personal preference. However, there’s one thing that can’t be denied; wired mice are better than wireless ones. By which I mean, compared to a wired mouse, there’s a noticeable lag between you moving the mouse and an action occurring on screen when using a wireless one.


Not that some people seem to notice the difference, but it’s definitely there and can be off-putting. However, even the most avid gamer spends a lot of their time doing other things on their computers that aren’t as demanding of a mouse and so the convenience of a wireless one is welcome. Therefore the perfect computer setup has, for some of us, been to have two mice – a wireless one for desktop work and a wired one for gaming. Now, though, with the release of the Razer Mamba, we finally have a single mouse to rule them all.


Sporting the same external styling as the highly popular Razer Death Adder, but with a new ultra-high precision laser sensor and of course the joint wireless and wired capability, the Mamba is Razer’s latest and most expensive mouse to date. Indeed it’s the most expensive gaming mouse we know of coming in at around £120 despite it being listed on Razer’s website as costing only $129.99 – that’s the current exchange rate for you, though. 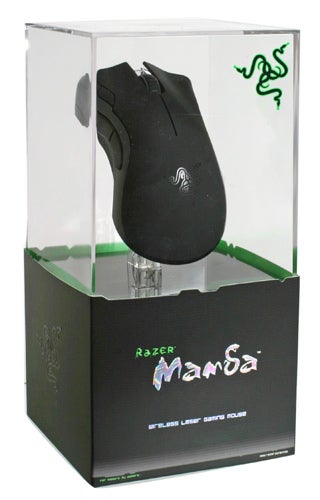 Draw-dropping its price maybe but you only have to set eyes on the packaging to know it’s money well spent. There’s no finger slicing blister packs or dull cardboard boxes here, this thing is presented like an expensive watch; resplendent on its stand surrounded by a thick-walled clear plastic cuboid. Slip the cardboard bottom section off and unclip the top, and you’re presented with a neat selection of cardboard draws for all the accessories. I know some people find such things frivolous but I for one love it. 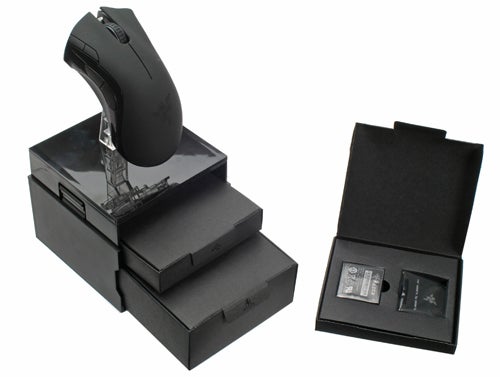 This sense of quality isn’t dampened any by the mouse itself which, just like its doppelganger, the Death Adder, feels rigid and sturdy. The top surface is finished in a soft touch matt black substance that we have known to start peeling off over time on other peripherals we’ve owned. But we still prefer this over a tougher but slippy surface any day. The buttons, meanwhile, are also superb with no hint of delay (i.e. a physical gap) between you pressing the button and it activating the micro switch below.


On each side of the chassis, where your little finger and thumb naturally sit, are rubber patches that make this one of the easiest mice to grip firmly. The forward and back buttons also fall perfectly under your thumb for convenient access. Overall comfort is something that’s largely subjective but we thought the Mamba represented a good compromise between being slim and low-profile enough for finger-mousers yet rotund enough to suit palm-users as well. 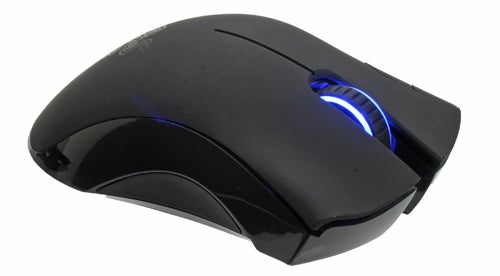 The scroll wheel is very light and is notched so it’s very easy to use accurately – a necessity for those that use it when gaming – and the middle button is very easy to activate without jogging the wheel. We did miss the weighty, free-wheeling scroll wheels of mice like the Logitech G9 and Microsoft SideWinder X8 when it came to everyday desktop work but we’d rather have the accuracy when gaming, especially as you can always press the middle button to activate rapid document scrolling when needs be – something that is actually more difficult on the free-wheeling type scroll wheels.

It’s almost a shame that Razer has given this mouse a headline-grabbing, record-breaking DPI level of 5,600 as it’s actually the least interesting part of this mouse and detracts from its truly unique and laudable features. Still, if you really feel 3,200 DPI is not sensitive enough, the Razer Mamba can take things to the next level for you. Like most gaming mice, the DPI level can also be changed on the fly with fives levels on offer. The two small buttons just next to the left mouse button are used for tracking up and down the levels whereas the value of each point can be specified using the included software. A small three-stripe LED readout displays which level you’re on by using a combination of green or red stripes. 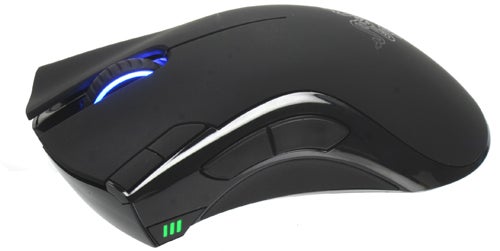 All told, it’s a simple and intuitive system to use, though Andy did say he found the positioning of the DPI-buttons interfered with the primary left-click button. Also, I’ve yet to meet anyone who actually uses more than a couple of DPI settings with any regularity so as such I would prefer to see an even simpler switching system like that on the SteelSeries Ikari. 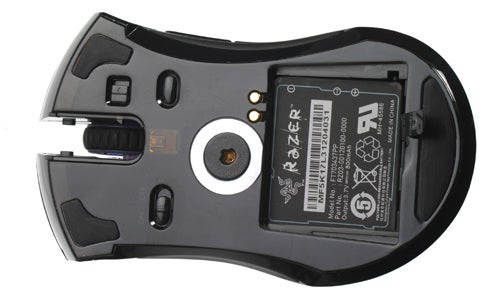 On the bottom of the mouse are three relatively small teflon feet that despite their size provided a super smooth and wobble-free glide. The battery compartment is also hidden under here and it houses an 800mAh Li-Ion battery that’s apparently good for 14hrs of continuous use or 72hrs of ‘typical’ usage. Our experience suggested these figures were reasonably accurate. Nevertheless, we’d prefer to see a spare battery included at this sort of price. The battery compartment also doubles as the indent into which the wireless dongle-cum-charging dock sits. 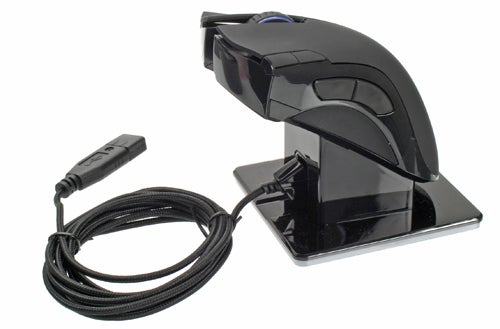 The bottom is also home to the button for syncing the mouse with its wireless dongle and an on/off switch for controlling the mouse’s wireless signal. Meanwhile, the little latch, with the eject symbol next to it, is a clue to this mouse’s unique feature; its dual wired and wireless modes.


Unlike the Microsoft SideWinder X8, which featured an easy fit charging cable to enable non-stop wireless mousing, the Razer Mamba can actually be both a ”proper” wired mouse and a wireless one. You simply unplug the USB cable from the back of the wireless dongle and plug it into the mouse, where it is held firm by said latch. It can be a bit of a fiddle to swap the cable but with a bit of practice it becomes no bother. 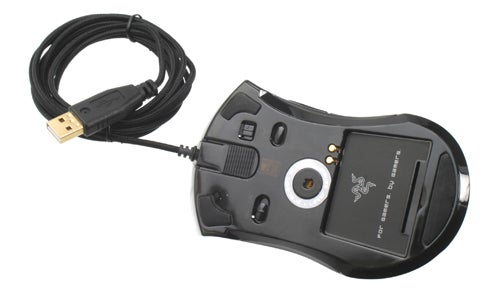 Of course, the advantage of the mouse becoming truly wired means you aren’t hamstrung by that slight lagginess that all wireless mice suffer from so you can be at your absolute best when gaming. Admittedly, the superb wireless technology that Razer has used on this mouse means it’s pretty darned good but the difference between it and using the mouse wired was still easily discernible.


We’ve had to knock the overall score down a notch simply because it’s so expensive but the combination of true wired performance, wireless convenience, superb styling, and amazing ergonomics make the Razer Mamba quite simply the best mouse we’ve ever tested and it will take something seriously special to beat it.