What is the Razer Mamba + Firefly?

The Razer Mamba + Firefly has a confusing name, because it’s a bit of a complicated product. The Mamba portion is a seemingly traditional wireless mouse, complete with scroll wheel and two thumb buttons, while the Firefly is a mousepad equipped with Razer’s trademark-level of blingy RGB lighting.

Where it gets interesting is the inclusion of ‘HyperFlux’ wireless charging, which allows the Firefly to wirelessly provide power to the Mamba. As a result, you’ll never have to plug in a cable to charge the Mamba. In fact, it doesn’t even contain a battery.

The question is: does this finally offer the best of both worlds, or is it a solution in search of a problem? We take the Mamba + Firefly for a spin to find out. 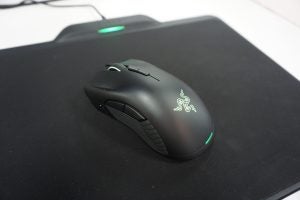 Both the Mamba and the Firefly look almost identical to their non-HyperFlux versions, which have already been on the market for some time.

The Mamba’s design is pretty standard gaming mice fare. It’s made to be used right-handed, so there are a couple of thumb buttons on the left-hand side, accompanied by a small amount of grippy rubber. On top there’s a scroll wheel complete with DPI adjustment buttons, which can be fine-tuned using the accompanying software.

The Firefly mouse mat is also fairly standard, although we appreciated the inclusion of a reversible surface that can be placed soft-side up or hard-side up. Razer claims that this is to cater to a preference between ‘speed’ (hard) and ‘accuracy’ (soft); but we went for the soft side for comfort reasons. 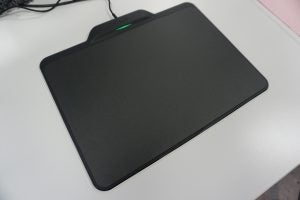 Wireless charging means the Firefly is a much more important part of the setup than most mouse/mouse pad combos, and this proved a bit of an issue on my cramped corner desk. Suffice to say, if you’re looking to buy this setup then ensure you have enough desk space for the 355mm x 282.5mm mouse pad.

Setup is a simple process of plugging the included USB cable into the mouse pad (although you can also plug it into the mouse, if you don’t have space for the full setup). The whole system will work without the need to install Razer’s Synapse software, but if installed, you’ll be able to control the lighting, DPI, and assign different profiles that you can switch between using a small button on the side of the mouse.

Both the mouse and the mouse mat are equipped with a gratuitous amount of RGB lighting. You can leave it on full blast, if that’s your thing, or else you can turn it down or even off in the software. In a manner befitting the middle-aged existence we’re currently hurtling towards, we opted to turn it off immediately. Sorry Razer.

Both the Mamba and Firefly feel well-designed and built, which at their £250 price point you’d hope they would be.

Using the Razer Mamba and Firefly for the first time feels a little weird.

The Mamba is designed to be used exclusively with the Firefly (or else with a wire directly plugged into it), so it has no battery. The result is a mouse that weighs just 96g – as lightweight as any wired mouse, without any of the bulk that the USB cable usually adds.

It’s a fantastically freeing feeling. Through a few rounds of Overwatch and PlayerUnknown’s Battlegrounds, I was able to throw the mouse around with reckless abandon, aware that in no small way was I getting the best of both worlds.

For the most part, the connection between the mouse and mouse pad was solid. Occasionally, when I lifted the mouse off the pad, I found that it would take a moment to re-establish a connection on placing it back down again. However, these instances were few and far between. 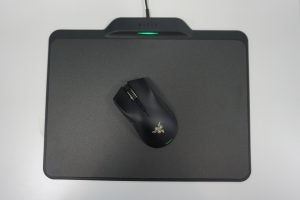 Unfortunately, the sensation of lag was a little more ongoing. Razer claims that the Mamba has a polling rate of 1000Hz, which in theory is identical to that of a wired mouse. When I swapped from a wired Deathadder to this wireless Mamba however, there was an unmistakable sensation of lag when playing a faster-paced game such as Overwatch.

Clicking the ‘reload’ button that I’d assigned to the upper-thumb button, for example, made it feel like there was a fraction of a second delay before the animation played out on-screen.

The extent to which you’ll experience this sensation will vary depending on the setup and the game you’re playing – but it was certainly apparent whilst playing Overwatch on a 100Hz monitor.

However, at other times – an extended session sailing the open seas in Sea of Thieves, for example – I didn’t experience any sensation of lag at all. 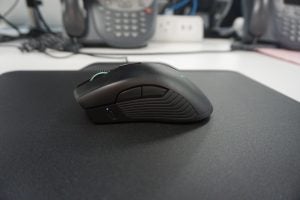 It’s at this point that we’d cover the battery of a wireless mouse, but since the design of the Mamba HyperFlux means there’s no battery, the wireless charging mouse pad isn’t charging a battery; it’s powering it directly. And that’s pretty neat.

The software side of the equation is handled by Razer Synapse. We could do without its odd insistence that you need to be logged in and connected to the internet to use it, but once you’re in, it’s a simple enough process to edit DPI settings and customise buttons to your heart’s content.

Once you have everything set up the way you like it, you can save your settings to one of five profiles that can be switched between using a button on the mouse.

Why buy the Razer Mamba + Firefly?

If you’re frustrated by the compromises of both wired and wireless mice, then the Razer Mamba + Firefly is a solution that comes closest to offering the best of both worlds.

You get the lack of bulk that comes with a wireless mouse, with none of the weight of a battery or the hassle of charging. This isn’t the most responsive wireless mouse we’ve ever used, but depending on the types of games you like to play, you’re likely not even to notice.

That said, it’s expensive, even considering the cost of typical gaming mice. If this is an issue, then you’d be better served by a dedicated wired or wireless mouse.

If you can afford the premium price tag, the Mamba + Firefly is an intriguing idea that almost entirely delivers on its lofty promises.