When it comes to speaker systems for PCs, I’m in full agreement with Riyad – surround-sound set-ups are, for the most part, completely pointless. Unless said PC is in fact a media centre sited in a lounge and also hooked up to a TV, there really is no need for a 7.1-channel sound system. Rather, the money which would be spent on such a set of speakers would be better off invested in a good 2.1-channel system. It’s a simple case of quality over quantity.


Last year, Creative’s Gigaworks T3 speakers proved just how true that is, offering, for the pretty reasonable £160-odd asking price, not only great design but also, most importantly, fantastic sound quality. PC accessory stalwart Razer isn’t prepared to let Creative rest on its laurels, though, and is ready to compete with its Mako 2.1-channel speaker system. 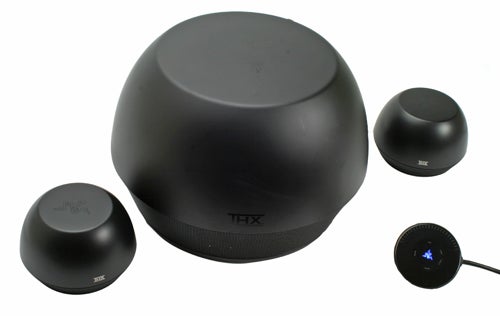 Razer’s past performance in the audio arena might not garner expectations of greatness from its Mako speakers; the Piranha gaming headset, for example, ended up making a mediocre showing for itself. However, certification from THX and that party’s collaboration on the design of the Makos should help assuage any doubters. On balance, then, we should rightly expect the Makos to make an impression.


Out of the box, they certainly do so. Both the sub-woofer, which also packs the system’s bi-amp circuitry, and satellites have a button mushroom shape to them which is a refreshing change from the norm. The solid-feeling metal construction and matt black finish only goes to enhance the appearance and the imposing size (and weight) of the sub gives a reassuring air of quality to the whole arrangement. 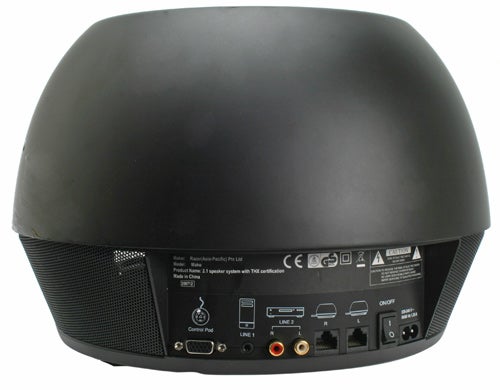 At the back of the sub woofer-cum-amplifier sit the ‘line 1’ 3.5mm input, ‘line 2’ RCA input, power jack and switch, RJ-45 connectors (as needed for the Cat 5 cables for the left and right satellite speakers), together with an input for the wired remote connector.


Speaking of which, the remote is the one area where the Mako’s design team hasn’t done so well. The offering of power, volume and bass output level adjustment, a mute control and input selection, not to mention headphone and line-in jacks, is all well and good, but the use of touch-sensitive controls means that in practice the remote is simply horrible to use. Unlike the Creative T3 remote which has a wonderful tactile feel to it, making fine adjustment a breeze, trying to adjust the volume on the Makos with any degree of precision is an exercise in futility and a recipe for extreme frustration.

The unusual and, to my mind at least, awesome styling of the Mako speakers isn’t just an important design choice aesthetically, though. Quite the contrary, in fact, as this downwards projecting speaker arrangement is used to combat the potential problem of interference between direct sound waves produced by ‘tower’ style speakers being interfered with by reflected waves from the surface on which they sit. As all of the sound from the Mako speakers comes reflected, there is little interference, which in turn should mean better sound quality.


Further, being downwards-facing, the drivers within the Mako speakers are not focused in any particular direction, but rather project sound omni-directionally which means they should produce a much wider ‘sweet spot’ than a traditional speaker set-up. 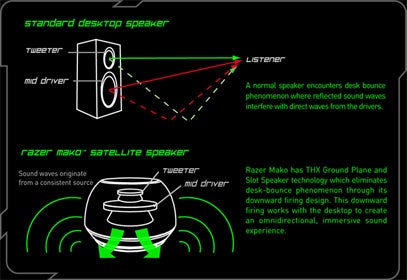 Finally, there is Razer’s proprietary ClassHD amplifier. Unlike other amps, which have power rails constantly at their maximum output, the ClassHD amp uses a tracking power supply that matches the power rails’ outputs to the input signal, providing only as much power as needed. Razer claims this offers a clearer sound, less distortion and better power efficiency than traditional fixed-output power rail solutions.


The effect of using ClassHD technology is probably the least noticeable. Not that the Mako speakers lack clarity, far from it, but attributing that to the type of amplifier used is difficult as the great clarity the Makos provide could simply be a case of Razer and THX using inherently non-distorting drivers. 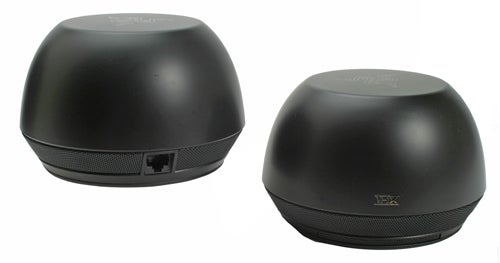 Compensating for the lack of obvious benefit provided by ClassHD somewhat, the downward-firing orientation of the drivers definitely makes a case for itself. Instead of a position related sweet spot, as forward-facing satellites usually give, the Makos instead end up with a sweet spot controlled by the distance from the speakers and the volume at which they are set – the further away one wishes to sit, the more volume is required, although never to an unreasonable level.


The only problem, per se, is that the surface on which the Mako speakers are placed has a significant effect on how they sound. On carpet, the speakers are next to useless as almost all of the power and force of their output is absorbed by the fibres. If you don’t have solid surfaces on which to place the Makos it isn’t the speaker set-up for you.

Luckily, if you have wooden flooring, or a desk big enough to accommodate a sub woofer and two satellites, then you’re in a perfect position to be able to treat yourself to the great audio reproduction of the Mako speaker system. Playing through the cracking soundtrack to ”Life” (currently vying with ”Supernatural” in my estimation as ‘Best Show on TV’), including such brilliant tracks as Clem Snide’s ”Moment in the Sun” and Kid Beyond’s ”I Shall be Free”, proved that the Mako speakers can offer fantastic detail and clear mid and high-range reproduction, while also delivering punchy, but not overwhelming bass.


Switching over to something a tad more rocky (ho ho), namely Survivor’s Eye of the Tiger the Makos coped just fine, giving the rock classic as much force and vigour as anyone could possibly survive without waking up clad in Lycra and wearing ridiculously thick-soled ankle-length boots. 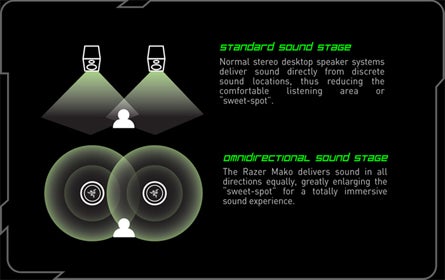 Films and TV, too, were equally enjoyable to listen to via the Makos. Our office trailers of choice, those for the forthcoming ”Watchmen”, came across with tremendous presence and, again, clarity. Chucking on a couple of episodes of ”Supernatural” and the impression left was equally good, with the action-packed main sequences and the brilliant classic-rock soundtrack all sounding every bit as good as one would hope.


Firing up a few games, arguably the area where Razer would be expected to excel, the Makos really shine. After a short session (okay, a couple of hours) ravaging the Locust in Gears of War 2’s horde mode before also blitzing through a couple of levels in the main campaign, it was clear that the Makos reproduced gun fire and grenade explosions with incredible punch. Even Gears’ at times haunting but always penetrating soundtrack seemed more pronounced, adding real depth to the already highly engaging gameplay experience. 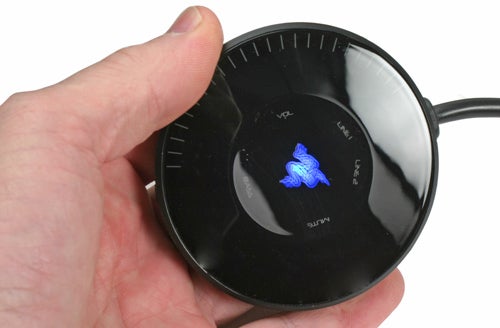 Sadly, the Makos don’t sound £100-odd better than Creative’s T3s. Yes, some of that price difference can be attributed to the superior build quality and THX certification but, for most buyers, I doubt that’s reason enough to plump for the Razers. That’s a shame because they really do sound fantastic.


Razer has created an absolutely superb set of 2.1-channel speakers in its Mako system. However, even considering the sublime styling and terrific audio quality, it’s hard to recommend them over Creative’s T3 speakers which retail for some £100 less. If money is no object or the Mako’s price can fall below £180 then the situation would be different.