What is the Razer Lancehead?

The Lancehead is an ambidextrous gaming mouse that Razer hopes will take the world by storm. It has a good weight, fits in my hands well, and is highly responsive across a wide range of applications. It’s a looker too, with that signature Razer logo brightening up the desk, and offers long-lasting battery life to boot.

The Lancehead isn’t without its shortcomings, however. While the laser sensor is accurate, it doesn’t feel quite as pinpoint as that found in Corsair’s Glaive – and I did encounter range issues that did sour the otherwise excellent experience.

Adopting a mid-tier size and weight, the Lancehead fits brilliantly in my hand. It’s ambidextrous in design, so each side is symmetrical, and therefore suitable for both left- and right-handed users.

The Razer logo sits on the top of the mouse; it wouldn’t be a Razer product without a loud and proud RGB LED shining through. The plastic finish feels smooth to the touch, while the thick rubber sides provide a good level of grip. My review unit is finished in a grey gunmetal, while a jet-black variant is also available.

In terms of buttons, there isn’t anything particularly unusual here. Each side of the mouse is home to two buttons pre-configured as backwards and forwards. The top of the mouse has two buttons for changing the DPI, and the usual left/right clicks and a scroll wheel. Each click-switch uses Razer’s ‘mechanical’ switches, which have a short travel distance and are great in operation. The scroll wheel feels good, too, but lacks the infinite scroll wheel found on Logitech’s G900. 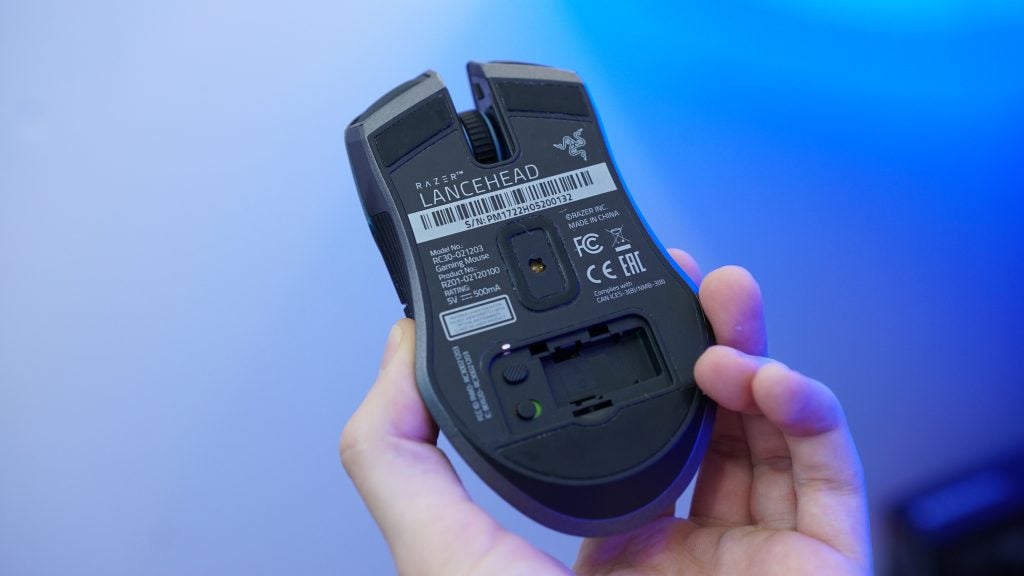 The wireless nature of the Lancehead requires a USB dongle for operation, which can neatly rest in the base of the mouse when not use. In the box you’ll also find a USB cable for charging and/or wired operation, as well as an adapter block that can be used to position the wireless adapter closer to your desk.

Other than housing the transceiver, the base of the mouse holds the 16,000dpi laser sensor and three Teflon pads. It’s a shame that there isn’t any weight adjustment here – although, personally, I found the 111g to be comfortable and ergonomic.

The majority of the weight is at the front of the mouse, however. As a result, some customisability to tailor the fit would have been appreciated. Having said this, the Lancehead is far more comfortable in my hands than the Asus ROG Spatha.

Using a wireless mouse for gaming may sound like a no-no to some, but Razer is definitely proving otherwise. When set up correctly, performance proves slick and it’s easy to operate. You’ll wonder why you didn’t cut the cord sooner. The key for best possible performance is to ensure the transmitter is on your desk. Plugging into the PC under my desk resulted in infrequent but irritating drop-outs. 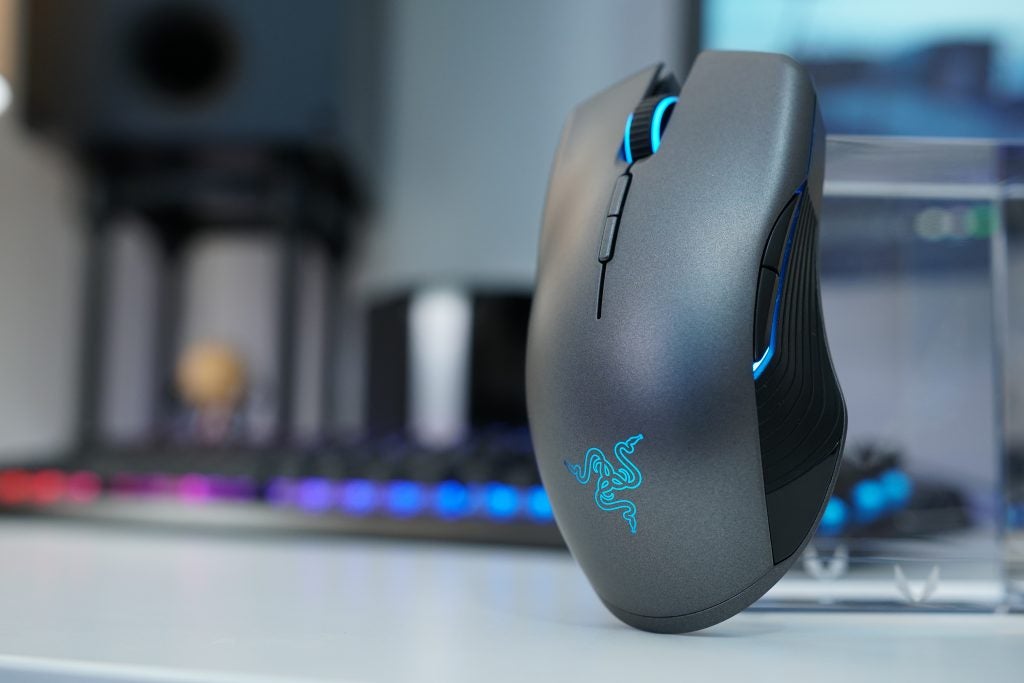 Using the mouse for all my daily workflow needs was a pleasure, with its unobtrusive size making it a breeze to power through web browsing and video editing. The 16,000dpi laser sensor far exceeds what most people would ever use; I opted for a sensible 1800 setting. Having said that, it’s great to have the flexibility, and those with multiple high-resolution displays will find themselves making full use of what’s on offer.

If I were to be picky, I’d say that the 16,000dpi sensor inside Corsair’s Glaive and Scimitar Pro mice feels slightly more accurate when it comes to micro-movements, but I doubt anyone would have any complaints with the Lancehead’s accuracy. 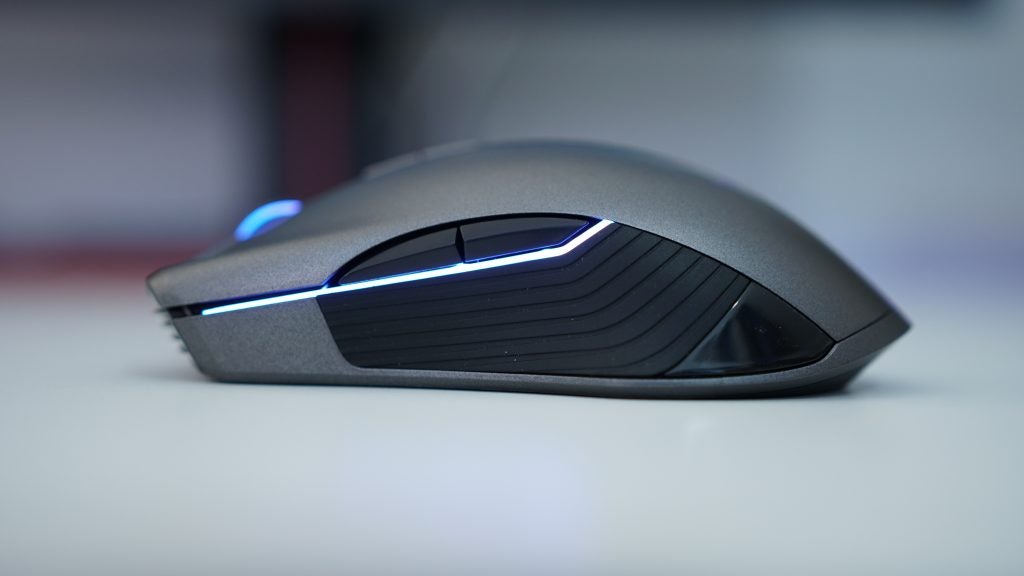 For my gaming tests, I opted to re-install Titanfall 2 – Respawn’s highly vertical first-person shooter. The Lancehead was excellent here, with smooth and reliable tracking, which made it easy to rack up some leaderboard-topping scores. I never felt at any disadvantage from the lack of that infamous cable, and throwing the mouse around my desk felt all the better for it – flick-shots are really easy with this mouse.

Obviously, you’ll need to charge the Lancehead on a regular basis, but this isn’t as much of an issue as you might think. Rated for 24 hours of continuous use, the battery life is super-impressive, and those opting to turn off the lighting should expect to get even more out of it.

In practice, 24 hours is perhaps a little over ambitious, but my only gripe is with the cable itself: the shape of the mouse connector can be tad tricky to connect. Logitech’s system is more user-friendly.

Razer Synapse is nothing new, but the Lancehead uses an entirely revamped version dubbed ‘3.0’. It’s still in beta, but it will self-install – if you allow it – on connecting the mouse for the first time. It’s really well designed, and has a fresh new look that’s visually appealing and easy to use. It does require you to set up a free online account, but profiles are then stored in the cloud – useful if you use multiple PCs.

You can reassign each of the buttons, alter the DPI and change the RGB lighting. There are plenty of options to assign, with the ability to create and assign macros, adjust the sensitivity and use windows shortcuts. Razer also incorporates a ‘Hypershift’ mode, which allows you to assign an additional function per button; this can then be activated by holding down the self-assigned Hypershift button. I opted to control volume with the scroll wheel while holding down the backwards button, for instance. 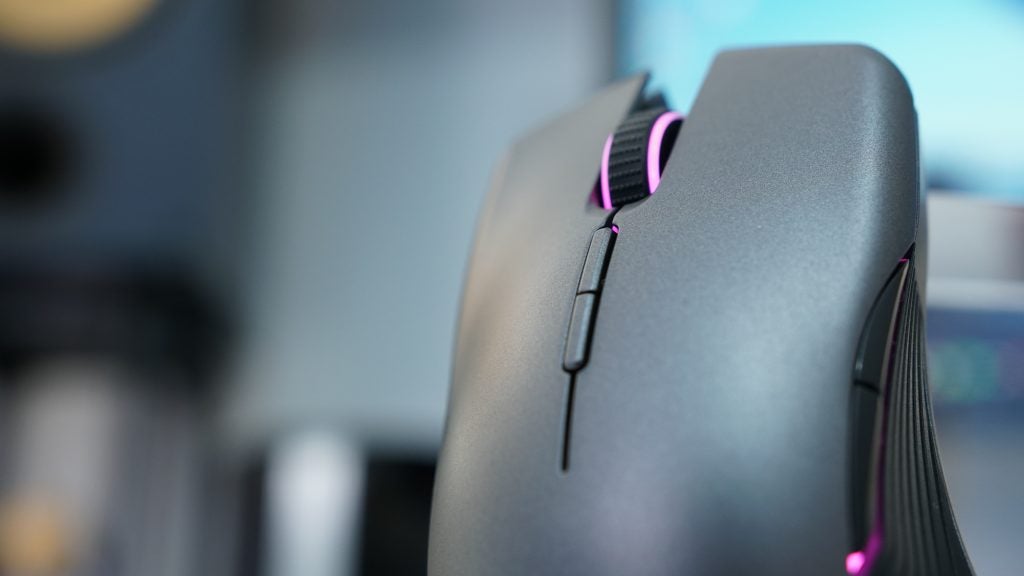 As an RGB peripheral, the mouse has plenty of visual customisation too. You can choose from a range of pre-made effects, or create your own with the Chroma module. If you have any other Razer peripherals, you can of course link them up for an even cooler vibe. Despite having four lighting zones, the Lancehead seems a little understated compared with rivals from Corsair and Asus. This isn’t a bad thing in my book, since it looks great without being over the top.

Should I buy the Razer Lancehead?

There’s plenty to like about Razer’s Lancehead. It’s super-ergonomic, looks attractive and performs well in games. The benefits of wireless mice go beyond desk appeal too, since the freedom of movement really can help in those intense firefights. 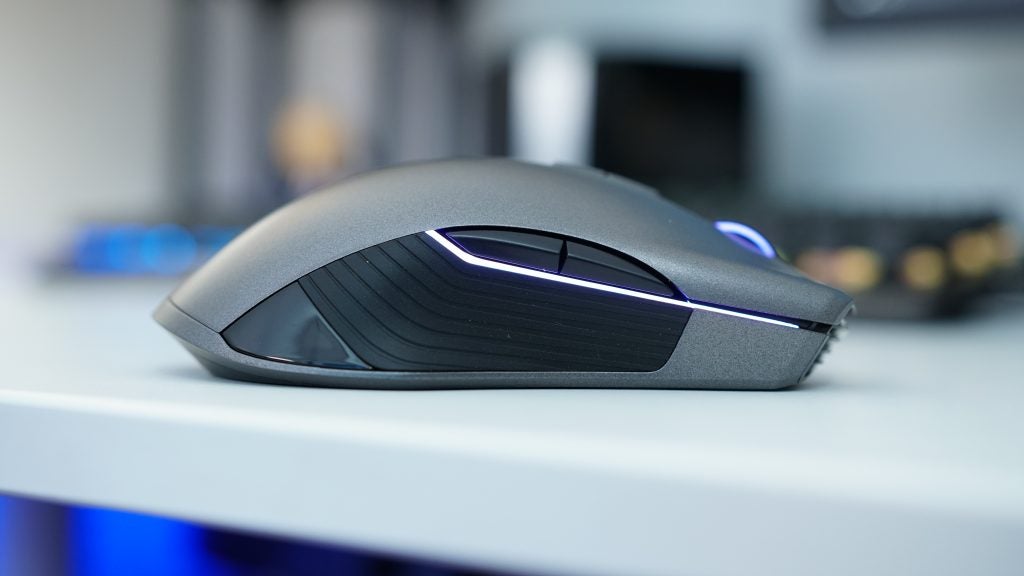 At £139.99, the price for a mouse is eye-watering. You do get a high level of precision, but you’ll be able to pick up a wired model offering similar performance for less than half that price. Factor in the fact that the receiver really needs to sit near your mouse-pad for the best performance, and you have something that won’t appeal to everyone.

However, if you’re prepared to spend to part with that amount of cash and demand wireless then the Lancehead is certainly worthy of your cash.

An expensive wireless mouse, but one that delivers where it counts.