The Razer Kraken X is a good mid-range headset that gets most of the basics right: it’s comfortable, sounds decent and has a great microphone. Unfortunately, its poor bass performance doesn’t bode well for action and shooter games, where loud and deep explosions are the norm. If you want a blockbuster audio experience, you’ll need to pay more. Otherwise, this remains a great value gaming headset

Gaming headsets are usually either bargain-bucket quality or pimped out with so many features that the price has rocketed to hundreds of pounds. The Razer Kraken X is a refreshing middle-ground offering.

The Razer Kraken X is a very straight-forward gaming headset. It uses a wired connection, features 7.1 surround sound and a bendy, undetachable microphone. But, with a starting retail price of £49.99, there’s no issue with such simplicity.

And now refreshed with a Mercury White colour option, the Razer Kraken remains one of the best gaming headsets at an affordable price.

The Razer Kraken X looks almost identical to the rest of the Kraken headset lineup. In fact, the only difference to this and the Razer Kraken X Lite is the inclusion of on-headset volume control and microphone switch.

But why fix something that isn’t broke, right? The Razer Kraken X is a very comfortable headset thanks to the thick memory foam around the ear cups and the underside of the headband. Only after multiple hours of play that I felt a slight pinching on my ears – otherwise, it was pleasingly snug. Weighing only 250g, the Kraken X shouldn’t weigh down your head after extending hours of gaming. 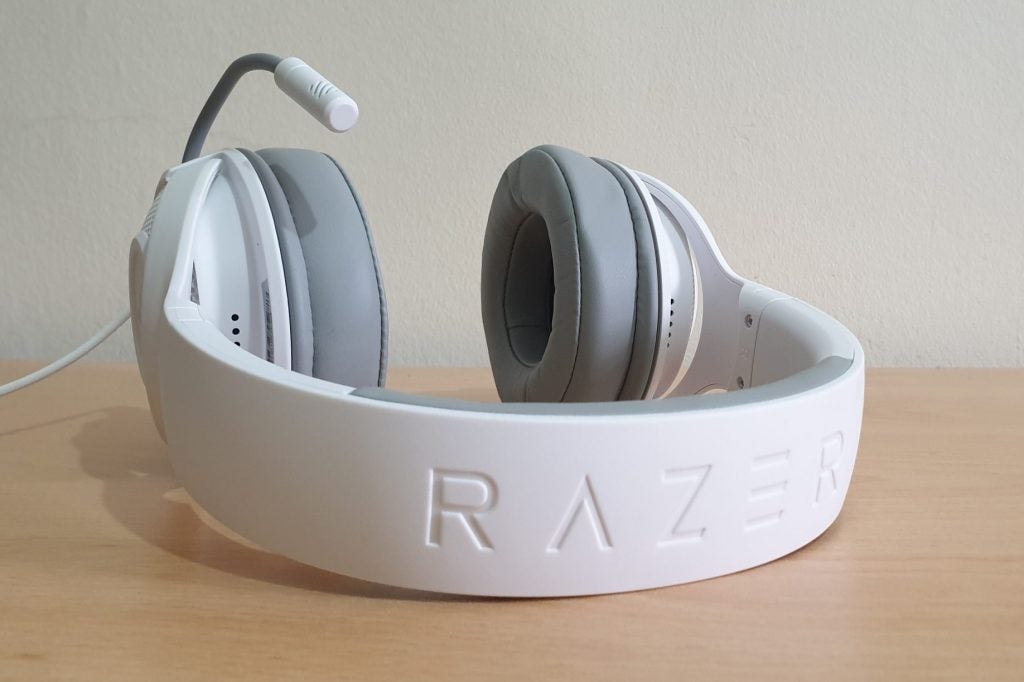 The rest of the headset is made of plastic, but with a sturdy build and smooth finish, it certainly doesn’t feel cheap. The headband can easily be stretched or even extended by a couple of centimetres if it needs to clamp around a bigger head. The microphone is supported by a flexible cable which can be twisted and bent without fear it’s going to snap off.

It’s a basic look, but it still looks classy and stylish, just like most Razer products. You can use the headset in classic black, a PlayStation black /blue combo and, now, Mercury White. Razer has recently been expanding the colour options of its peripherals to appeal to a broader audience, and I’m a big fan.

The white plastic complements the grey padding well here, and it’s a nice change to the blacks and silvers you usually find with peripherals, without going garish with flamboyant colours. That said, I do love the green of the standard Razer Kraken and wish this was an option with the Kraken X.

The Razer Kraken X isn’t the most expensive gaming headset out there, so you’re going to have to make a few compromises. The audio quality is good but nothing exceptional to boast about.

Volume can be cranked up to a high decibel while retaining a high level of detail. The inspiring soundtrack of Civilization VI sounded great with the headset, as did Sean Bean’s purring monologues. For dialogue and soundtracks, this headset can do a competent job.

When playing Apex Legends though, I immediately noticed that explosions and gunfire lacked depth and sounded a little hollow compared to more expensive gaming headsets I’ve used recently. I certainly felt like I was missing out by having a sub-par bass – those who want a super-accurate blockbuster audio experience will need to look elsewhere. 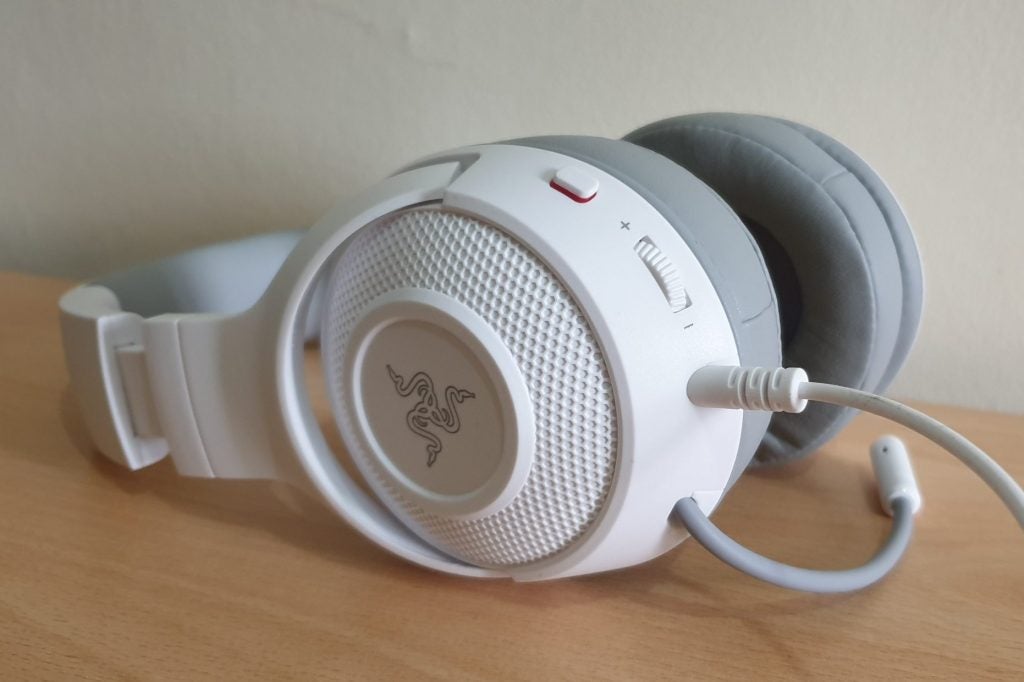 To make up for this, the Kraken X features 7.1 surround sound, allowing you to pinpoint the precise location of your enemy. I found this to be really useful in Apex Legends, as footsteps consistently alerted me to incoming threats.

To enable the 7.1 surround sound, you must download software from Razer’s website and then punch in a code that comes bundled in the box – important to bear in mind if you’re buying second-hand. This will then link to your Razer account, allowing you to use it with multiple computers but, unfortunately, not with consoles – the Kraken X still works with the PS4, Xbox and Switch, you just miss out on 7.1 surround sound.

I also used the Razer Kraken X for music playback. The headset performed well, with clear vocals and instrumentals, although it didn’t quite offer that punch which rock songs demand. For the price, you’re still getting a very capable and versatile headset.

The Razer Kraken X uses a cardioid pattern, which means it picks up sound from the front and sides but not the rear. This results in the headset’s microphone ignoring background noise, so it doesn’t drown your voice out.

I put this to the test, playing loud music through my smartphone while recording my voice on Audacity. My voice came out loud and clear, while the music in the background could only be heard as a faint thrum in the distance. 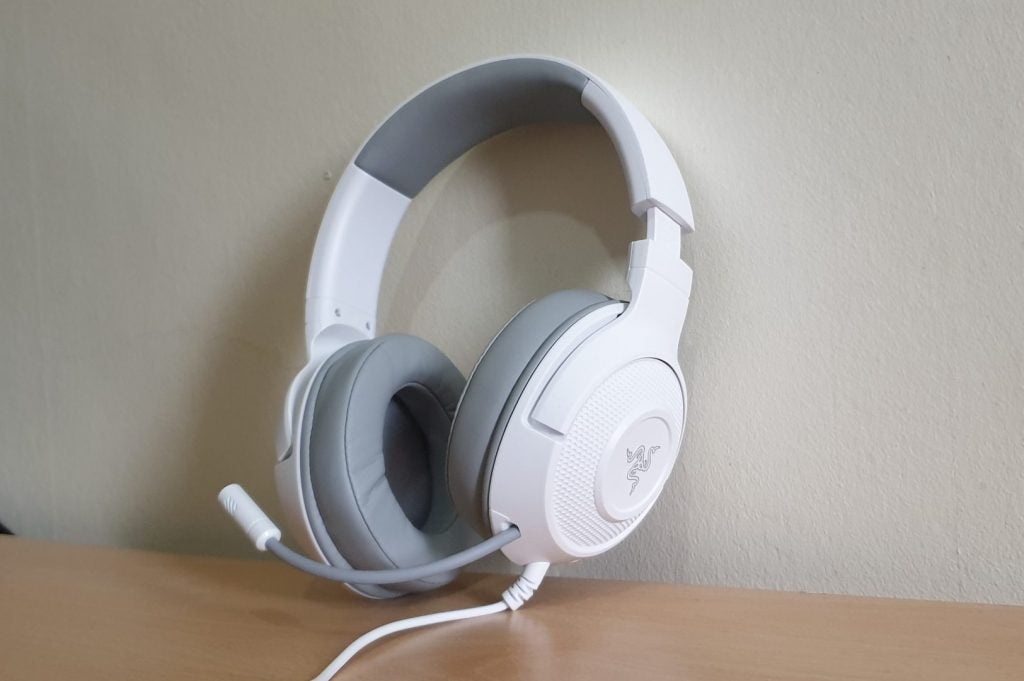 The quality of the recording was excellent too, with teammates having absolutely no issue hearing my ramblings. For the price of the headset, the microphone offers fantastic quality and is arguably the biggest strength of the Kraken X.

My only personal issue with the microphone is that it isn’t retractable or detachable. When using the headset for Spotify playlists, I felt daft having a microphone dangling next to my month.

The Razer Kraken X is a great mid-range headset. It’s a far better offering than most budget options, with a super-comfortable, robust design and useful features like 7.1 surround sound, while undercutting the cost of more premium headsets by a decent margin.

By cutting costs, the audio quality does sadly take a dive. It’s no problem for vocals and soundtracks but its low-quality bass means gunshots, grenades and bombastic set pieces lack the gravitas found with more expensive alternatives.

It’s also worth bearing in mind that the Razer Kraken Lite is available at an even cheaper price, despite essentially being the same headset, just without the on-headset volume controls and microphone switch.

At its current price, the Kraken X is still a good option for those who don’t want to spend a fortune, while the introduction of the new Mercury White design has widened its appeal even further.