The Huntsman V2 Analog represents one of the best options for the cash-strapped gamer who wants to take things to the next level. Its analog switches are a joy to use and the build quality and overall looks of the board are stunning. Do beware though that its price tag means it isn’t a purchase for the faint hearted.

The Razer Huntsman V2 Analog has one killer feature that sets it apart from the majority of other gaming keyboards: analog switches.

Razer’s new Huntsman aims to bring controller-like accuracy to keyboards, with analog switches allowing you to trigger the likes of sprinting by simply pushing harder on the movement key. Such technology was previously only seen on boards from Wooting and SteelSeries, but now Razer’s jumping on the bandwagon with the hope of making the innovation mainstream.

The Huntsman V2 Analog is packing plenty of other features too, including super-speedy optical switches and the now infamous Chroma backlighting. With such a stellar high-end package, Razer may well have one of the very best gaming keyboards currently available.

Razer’s newest beast is by no means a cheap product, coming in at £249.99/€269.99/$249.99. This makes it comparable to Corsair’s K100 with its laser switches, Logitech G915 Lightspeed with its low-profile construction, and even team green’s own wireless BlackWidow V3 Pro.

For those with money to burn, the keyboard is available through Razer’s own website alongside a multitude of other retailers.

Given its high price, the Huntsman V2 Analog’s military-grade construction might be considered a given. Nevertheless, it still wows the crowds. Even under harsh pressure, there’s minimal deck flex and the Huntsman V2 Analog is pretty much guaranteed to stay in place thanks to its sheer size when laid flat.

Razer’s signature sharp edges go hand in hand with its matte black colouring, helping the Huntsman V2 Analog to look both classy and utilitarian at the same time. Even being offset by the sharp Chroma backlighting, the Huntsman V2 Analog’s looks manage to please both gamers and those who just want a decent-looking keyboard to complete their office setup. Moreover, despite add-ons such as the comfortable magnetic wrist-rest, the keyboard has a minimalistic look that will appeal to those who like a clutter-free desk

Razer hasn’t included any macro keys which (while would have been a nice inclusion) are rendered pointless by Synapse 3’s immense functionality. What Razer has done with the Huntsman V2 Analog is include some decent multimedia controls, comprising of a volume knob and some taller buttons to either play, pause or fast forward. These are a world apart from those offered by competitors, having both an increased prominence and tactility by comparison to some of Logitech’s slightly mushy buttons and sharp-edged volume roller.

To add to the Huntsman V2 Analog’s premium feel, it brings with it some slightly textured double-shot PBT keycaps usually reserved for the pricier keyboards on the market. Compared to their ABS counterparts, they promise greater durability and are built with longevity and heavy usage in mind. They also allow for the backlighting to shine through a little better. 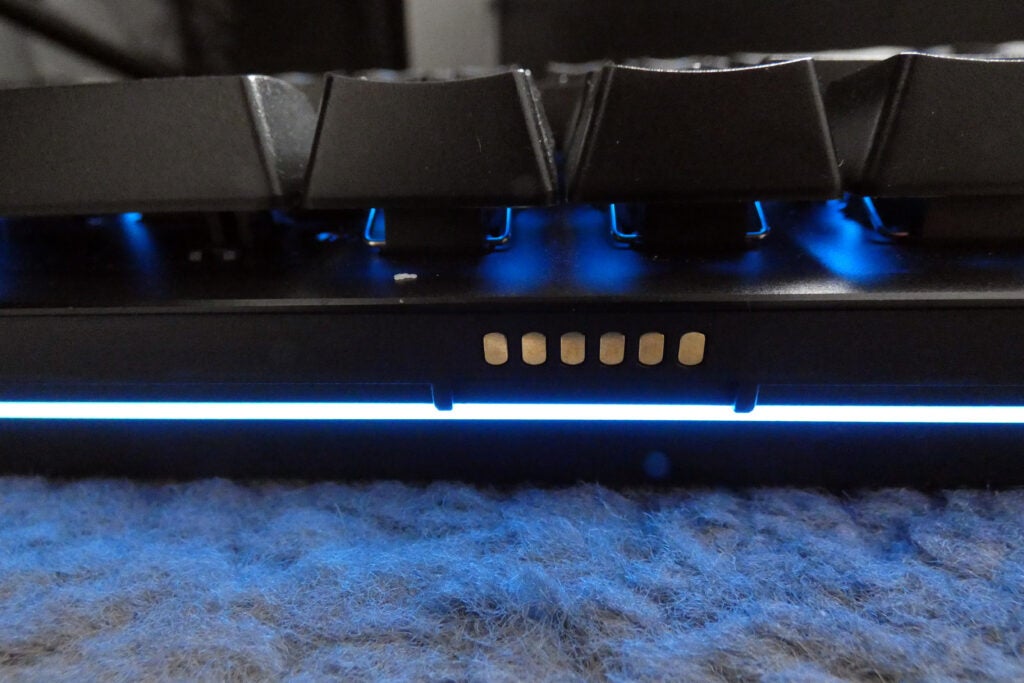 The Huntsman V2 Analog also rights a couple of the major wrongs of Razer’s other premium boards such as BlackWidow V3 Pro. The wrist-rest now has an attachment mechanism thanks to one relatively strong magnet, although I can’t help but think the attachment between wrist-rest and keyboard could have been stronger still by including more than just one anchor point.

The biggest design issue with the Huntsman V2 Analog lies in the cable. While the board is powered by a single USB-C connection, a second USB-A cable is required to power-up the passthrough function. Both connections have been built into a single wire, giving you a splitter cable which can make cable management an extra faff, especially if you’re not bothered about the passthrough.

It’s on the performance side that the Huntsman V2 Analog sets itself apart from most other keyboards. The introduction of analog switches means key inputs are now progressive as opposed to simply being on or off, resulting in an experience that more readily replicates one offered by a controller’s joystick.

The analog experience makes quite the difference in comparison to the more traditional, digital methods of inputting commands. However, when playing racing sims such as Assetto Corsa, I couldn’t help but fall into old habits such as pressing the S and D keys down repeatedly to alter steering input. 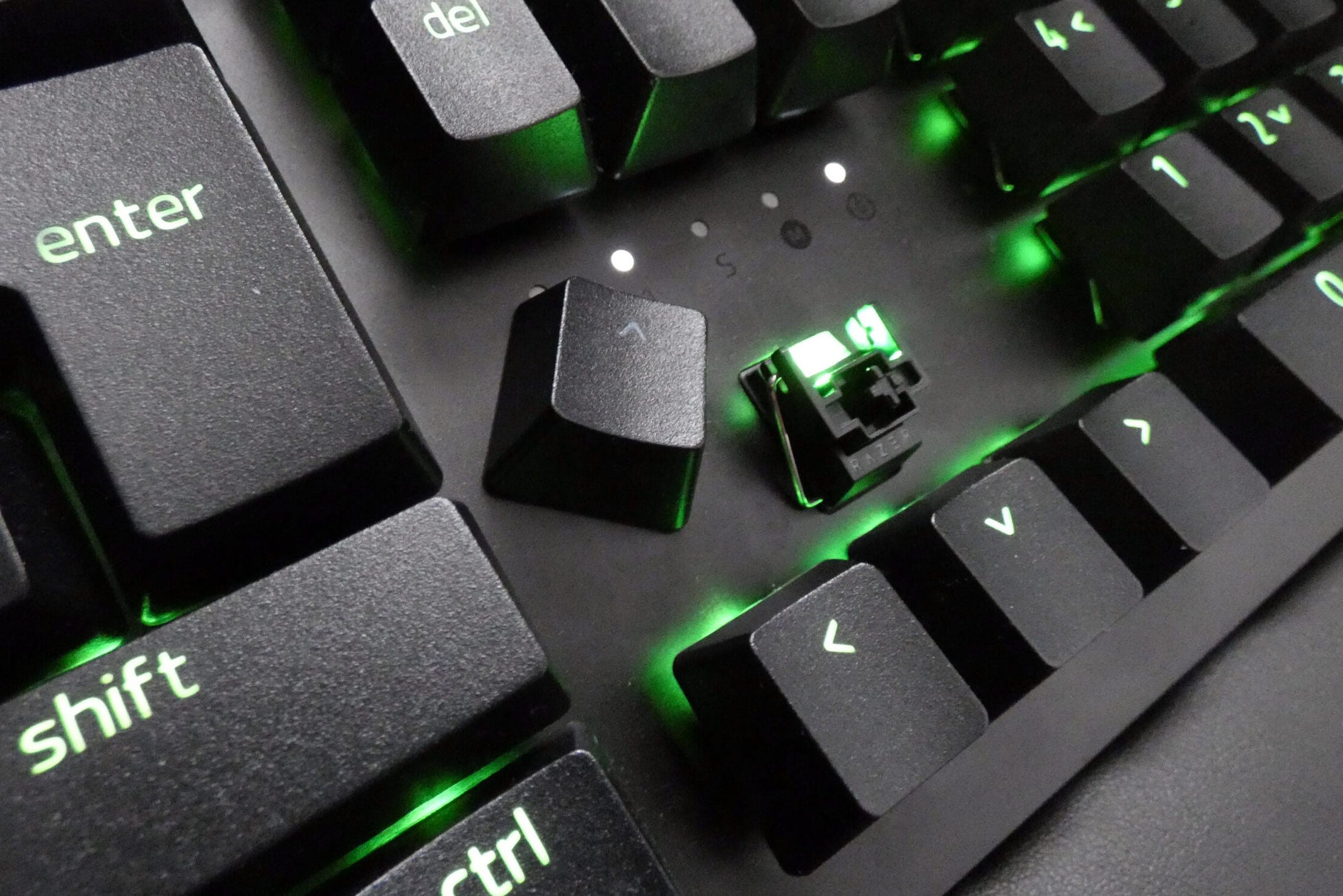 There is undoubtedly a learning curve and period of adjustment to be able to use the Huntsman V2 Analog to its full potential. However, once you’re there, it provides one of the most rewarding and engaging gaming experiences around, allowing you to perform actions such as equipping and tossing a grenade in single keystroke.

In addition, there’s a myriad of more traditional gaming functionalities such as full NKRO and anti-ghosting, as well as the ability to enter a “gaming mode” which disables Windows keys and other unneeded functions when you’re in the heat of battle.

The overall typing experience is good and pleasant enough for those who like a lighter keypress. However, this keyboard can be incredibly loud. Unlike boards with Razer Greens or Cherry MX Blues, this keyboard doesn’t have any audible notice of tactility. The Huntsman V2 Analog’s noise comes from the sheer volume of sound when the switch bottoms out. If you’re in a bedroom on your own, that’s fine; but in an office full of people, it would be better to opt for a board with more ear-friendly switches.

Some of the Huntsman V2 Analog’s best functions can only be unlocked by utilising Synapse 3, with the marriage between analog switches and the additional software providing one of the widest ranges of options I’ve ever seen.

This increased ability to customise is an inherent part of having an analog switch, and with the Huntsman V2 Analog it’s possible to customise the distance you have to push a certain key down to enable its respective function.

Although the function of having adjustable actuation points is nothing new, its integration within an analog keyboard does unlock greater possibilities. Furthermore, the ability to map every single key to mirror a respective controller input is where the Huntsman V2 Analog really shines, bringing with it a boost to performance over traditional keyboards. 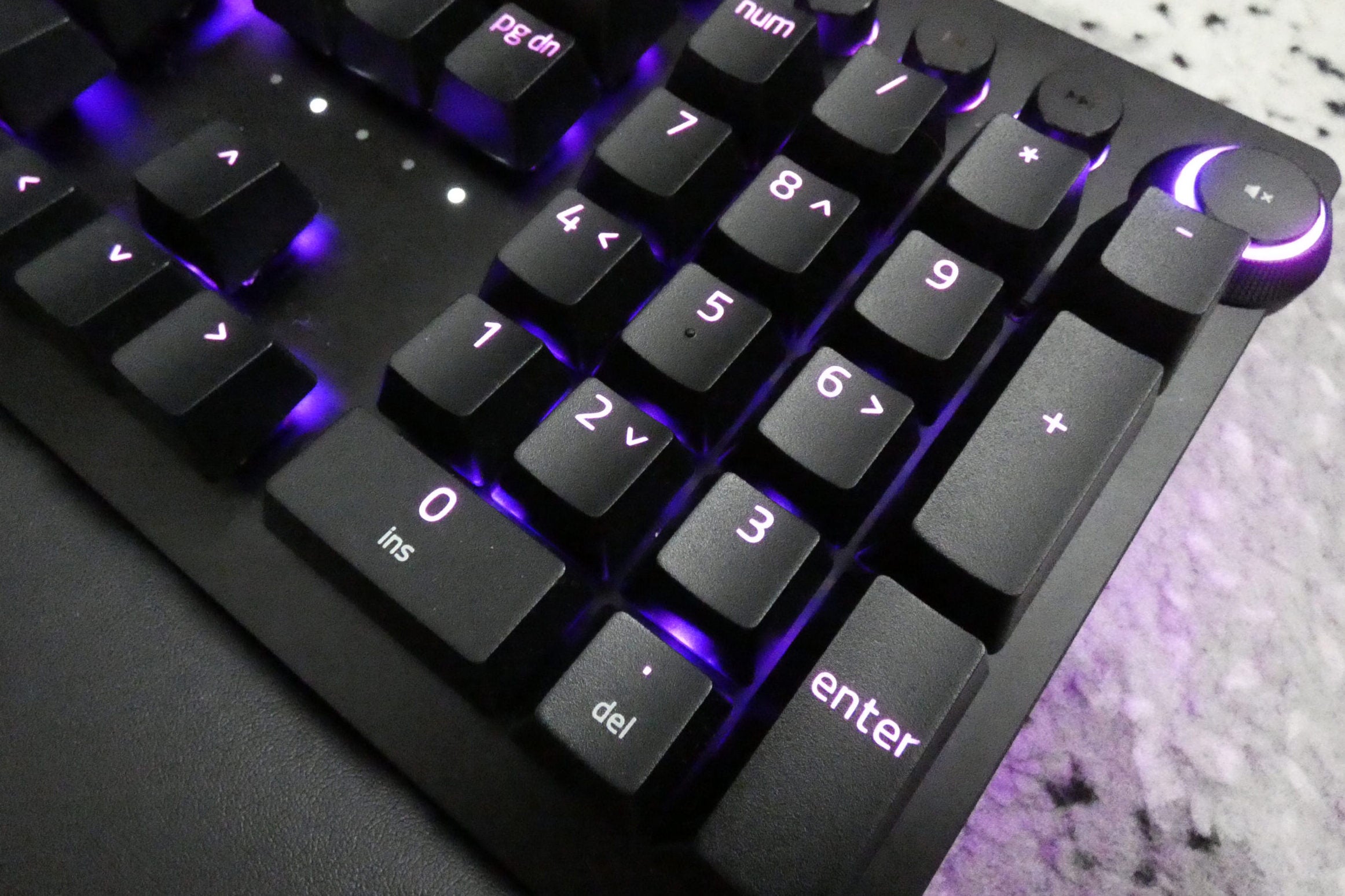 Even with the uber-wide customisation options that Synapse allows for, there are a couple of issues. Going round to program every single key on the Huntsman V2 Analog in order to replicate a controller’s full suite of buttons is a time-consuming process;  you might as well just plug in a controller. I’ll testify now to having spent a good hour fiddling with my controls just to make sure they were right, and that was just on 10 or so different keys.

While there are issues with the keys programmed in analog mode being out of action, Synapse 3 does allow for the option to switch between digital mode for typing and analog mode for gaming, with a handy keyboard shortcut of FN and the menu button. This is a nice touch, but I highly doubt it’s a combo that will stick in people’s minds, unless they’re using it constantly.

When it comes to the lighting side of things, the Huntsman V2 Analog cements Razer’s reputation as the finest in the business. As with other Razer Chroma-enabled products, the options for presets and per-key customisation are sublime, and the actual lighting is nicely bright and sharp.

The added bonus with the Huntsman V2 Analog is the attractive underglow, thanks to the lightbar that goes around the body of the keyboard. This can be extended to the wrist-rest to make your RGB kingdom go beyond just the keyboard – and, moreover, with Synapse’s integration with other devices such as the Phillips Hue lights, it isn’t only bedrooms or offices that can get their glow on.

You should buy the Razer Huntsman V2 Analog if…

You should not buy the Razer Huntsman V2 Analog if…

Can you remove the keys?

Does it have a USB passthrough?