If you’re looking for a small gaming keyboard to save some desk space, then the Huntsman Mini is definitely worth a pick up. Although the lack of arrow keys could be a big issue for some.

If you’d have asked me several years ago whether small form factor keyboards would’ve made their way into the mainstream, I’d have gasped at the mere thought of it. And yet in 2020, it looks like I’ve been proven wrong by the new Razer Huntsman Mini.

Despite its smaller size, the £129.99 keyboard is a similar cost to certain TKL and full-size boards from the likes of Asus and Logitech. But on first impressions, with standout features such as optical switches and brilliant build quality, that price might well be justified.

But is the Huntsman Mini good enough to stand up against rivals in an almost David vs. Goliath fashion? Let’s find out.

Despite being an incredibly tiny gaming keyboard by comparison to other behemoths in the Razer line-up (such as the Blackwidow and the Ornata Chroma), the Huntsman Mini really hasn’t compromised on any of Razer’s signature features.

It’s definitely a rock-solid feeling ‘board, built with a metal top plate to aid with strength and a seemingly unbreakable plastic exterior. There’s absolutely no deck flex, even under heavy typing strain, which is almost to be expected given Razer’s previous offerings. 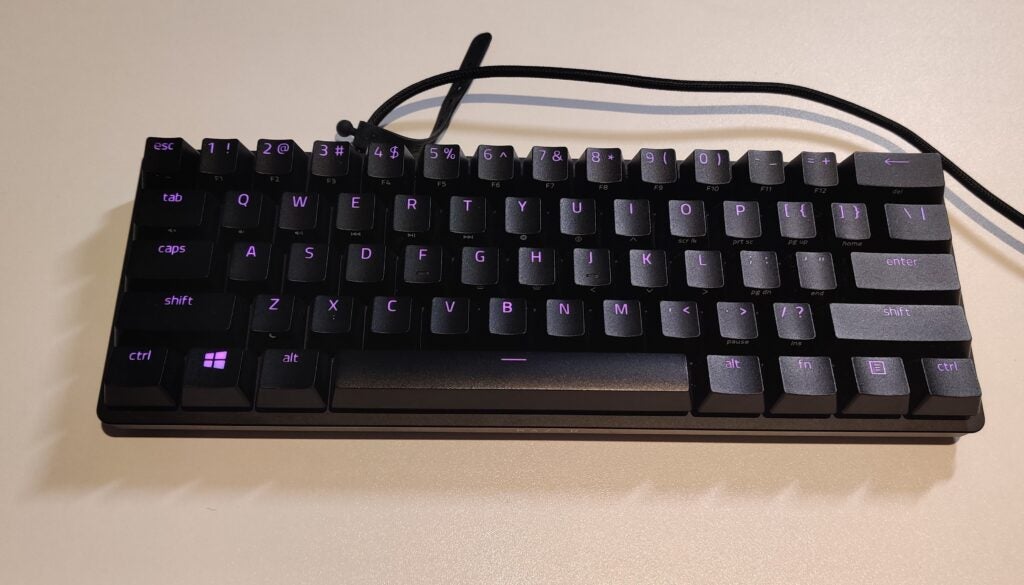 With it being so small, it’s easy to think some of Razer’s premium looks have been lost, but you’d be surprised. Sure, the Huntsman Mini might not have an illuminated logo (where would you put it?), but it does at least come with the traditional aggressive looks as well as a nicely etched logo on the underside. It may not be engraved but that’s only a minor detail.

One nice thing about the Huntsman Mini is that it features double-shot moulded keycaps made of PBT plastic: a better option than the more traditionally used ABS. In addition, the font Razer have used is their easy to read, modern-looking typeface that exudes a classy vibe.

It’s only natural that the Huntsman Mini misses out some features of a full-size board. You won’t find an additional number pad, nor will you find arrow keys which is a pretty big miss.

One thing that Razer’s little guy does have on some of its small rivals is the inclusion of a full-size space bar. Alternatives such as Filco’s Majestouch Minila only feature a smaller space bar that’s flanked by two separate function keys.

On the keyboard’s underside, the Huntsman Mini makes use of some pretty sturdy two-level plastic feet that help to raise the height up if the natural typing angle is too shallow.

Separate from the board itself is a detachable and braided USB-C to USB-A cable, which also looks better than its cheaper, non-braided counterparts, as well as helping out a bit with portability.

Performance – Light and clicky switches make for a good experience

When it comes to key switches, it’s no surprise that the Huntsman Mini makes use of Razer’s own optical switches which are a brand-new inclusion for this particular board. The review sample featured the Clicky variant, which are designed for a satisfying typing experience.

They feature an actuation force of 45 cN, bringing with them a lighter form of the more traditional clicky offerings from CHERRY with MX Blues or any of the clones from the likes of Gateron and Kalih.

While the newfound lightness is indeed welcome, I’ve always preferred to have something slightly heavier to type on and with the tactile nature of these switches; a more weighted option would’ve certainly been welcome.

Also, compared to their heavier and properly mechanical counterparts, these optical switches lack a bit of substance in the keypress and lose a certain sense of tactility as a result.

The fact they’re optical also plays to the Huntsman Mini’s strength, meaning they operate at the speed of light. In day-to-day use, the difference might not be noticeable, but when in those high-intensity battles, having speedy and light switches might just make all the difference.

For a few runs on Counter-Strike for instance, despite its smaller stature, the Huntsman Mini made for a great little companion as I snuck up on enemies with knives or just fired aimlessly into the distance.

The Huntsman Mini once again proves Razer’s capabilities when it comes to software and lighting is insurmountable. Its Chroma lighting engine, as usual, succeeds in providing the most crisp and sharp lighting imaginable and that power is all the more concentrated since it comes in a smaller chassis.

Razer’s more-than-versatile software, Synapse 3, allows for you to unlock the possibilities of your peripherals, which includes customising key inputs and making the brilliant backlighting as flashy and Pink Floyd-y as you like. It works an absolute charm with the Huntsman Mini.

Of course, as with the other keyboards and mice in Razer’s portfolio, there’s the option to connect the Huntsman Mini to other devices outside of the traditional ecosystem such as the Phillips Hue lights which means you can build your RGB kingdom beyond your traditional gaming bunker.

Should you buy the Razer Huntsman Mini?

When it comes to the niche of 60% gaming keyboards, Razer is certainly offering one of the more complete packages with the Huntsman Mini. It brings together all of the features that gamers have come to love Razer for with second-to-none build quality, incredible lighting and decent-feeling switches.

However, the feeling of the switches for me is a bit of a deal-breaker. Non-RGB competitors such as the Filco Majestouch Minila offer the whole host of more solid CHERRY MX switches, and specialists such as Ducky, who are one of the undisputed kings of smaller keyboards, also make use of MXs.

Sure, having light optical switches is fantastic, but for me, they just lack a certain feeling that you get from heavier counterparts. Even if Razer had put their own Green switches in as opposed to these optical ones, that would’ve been a great start.

But if you’re a big fan of the Razer brand and are looking for a 60% keyboard to save some desk space, the Huntsman Mini is definitely worth a pick up.