What are the Razer Hammerhead USB-C ANC?

For that sum you get an in-ear with a built-in DAC that can handle audio signals up to 24-bit/96kHz, a USB-C-compatible connection, and active noise cancellation.

With a premium look and feel for under £100, the Razer Hammerhead USB-C ANC aim to offer high-quality performance and features at a more convenient price.

Unbox the Hammerheads and alongside the headphones themselves you’ll find a manual, several ear-tips (including a pair of Comply Isolation+ tips), a small plush carry case, and some stickers, in case you feel compelled to plaster the Razer logo somewhere. The USB-C connector itself is tucked beneath the visible packaging, which makes removal of the headphones a slightly fiddly process at first.

Once out the box, the solid feel and construction of the in-ears form a favourable impression. Made out of aluminium, the earphones feel light but also sturdy enough to withstand a bit of damage. The smooth black finish adds to that positive impression, as does the Razer logo that sits on the side of both ear-tips, and lights up whenever the headphones are in use. 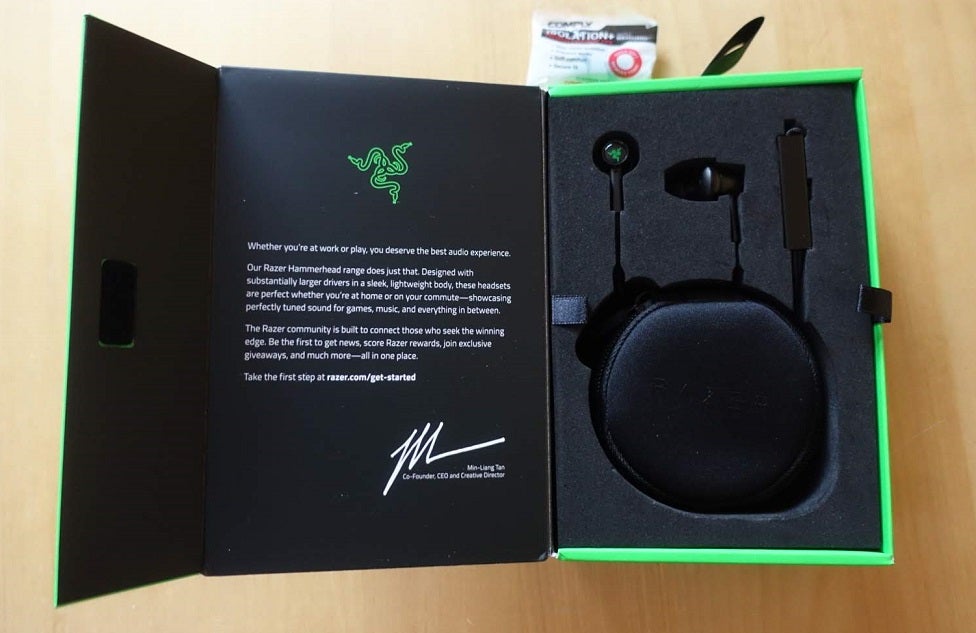 The inline cable is braided, limiting the chances of it becoming tangled; aside from a few knots, I didn’t experience many issues on that front. Although supplied with a selection of  ear-tips of different sizes (XS, S & L), I found that the Hammerheads provided a snug fit from the get-go, offering a good sense of noise isolation.

My ears were a little sore at first, but more time spent in the company of the Hammerheads and they soon settled in. They didn’t fall out or come loose during walks – even a session at the gym didn’t throw up any issues – although I wouldn’t recommend these in-ears for a run.

The three-button inline cable shares the same matte black look and feel of the ear-tips, with the Razer name etched on its rear. Two buttons adjust the volume and the middle pad is for pause, although none have markings to denote which is which.

The centre button does in fact have a few different uses. A single press can accept or end a call. A double-tap jumps to the next track, and a triple-tap takes you back to the previous one. Press and hold can either decline a call or launch a voice command.

Button presses felt responsive, although I did find that if I wasn’t quick with the double taps then it would lead to the song being paused; triple taps sent you to the next track instead of back to the previous one. Perhaps users with quicker (and smaller) fingers won’t suffer such issues, but my experience was a little trifling.

On the side of the inline control you’ll find a switch to turn on active noise cancelling switch. A blue light indicates it’s on and, performance-wise, the Hammerheads make a decent fist of ANC. Don’t expect a performance comparable to Bose or Sony over-ears, despite Razer’s over-zealous marketing spiel – these are in-ears, after all, and they don’t provide the type of over-ear, enclosed seal of those headphones.

When the ANC is activated, external sounds are noticeably muffled. Sitting on a train, the ambient sounds were distant. While the tannoy announcing the next station could be heard, sound made from other people on the train were subdued. The difference in volume was especially apparent once you took the earphones out.

Louder, heavier sounds still managed to penetrate. A train rumbling in the background could be made out, and on hitting the high street, louder sounds such as an ambulance, a bus and a motorbike all broke through the noise-cancellation bubble. Using them in an office did blot out environmental sounds, and while conversations were audible, I struggled to decipher what was being said – a good enough sign that the ANC was working as it should in that context.

Once your music is plugged in with a good seal, and with ANC turned on, the focus will turn to what’s playing. While it’ would be harsh to expect an ANC in-ear to block all external noise, we were hoping the Hammerheads would fare better at eliminating louder sounds. For quieter, ambient sound, though, the earphones were fine.

Don’t forget that the Hammerheads feature a USB-C connection, which limits the range of devices with which you can use them. Those with OnePlus smartphones should note that OTG (On-the-Go) storage needs to be enabled for the in-ears to be recognised.

Users of some USB-C compatible smartphones will find that some features won’t work. Call functionality is missing on the Samsung S9 and Samsung S9 Plus, and some Huawei phones have either partial or zero compatibility for some features. To find out which phones are affected, check out the Hammerhead USB-C ANC page here.

Put on a Spotify or Amazon Music stream and the Hammerhead offer a nicely rendered soundstage. I could detect where instruments and voices were in the soundfield, such as the opening lyrics to Kendrick Lamar’s “These Walls”, where lyrics moved from left to right in a manner that conveyed a sense of space and depth.

Playing songs at half-volume made playback a little lifeless and stale at times. Pump up the volume and tracks find a sense of energy and pomp, although the trade-off seems to be that slight detail is lost in all the excitement. Bass is prevalent; it isn’t hugely pronounced nor feeble. Clarity is decent, as is detail, with the Razer Hammerheads coming across as a smooth-sounding pair of in-ears.

Play Alan Silvestri’s Infinity War album and the Hammerheads conveyed the grandiose sweep of the soundtrack well. The earphones were able to keep up with the rhythm of a propulsive track such as “Forge”, while remaining admirably coherent and engaging in quieter moments. There were no noticeable problems dynamically either, with the earphones capable of transitioning from quiet to loud and vice versa without getting themselves stuck in a muddle.

It’s a clear and engaging performance from the Hammerheads, then; the more I used the earphones, the more I liked them. They won’t set tongues wagging, but for £80 they deliver an enjoyable performance.

While they couldn’t be classed as cheap, the Razer Hammerhead earphones do offer noise-cancellation for under £100. Drop down to almost half the Razer’s price and you coukd pick up  the excellent SoundMagic E11C – but without ANC.

The Bose QuietControl 30 are a decent alternative, but those are Bluetooth in-ears with ANC that cost over £200.

The Razer Hammerheads do a decent enough job with noise-cancellation, but they’re better suited to quieter surroundings. In that context they work well, and once the music is turned on, the outside world will quickly fade away thanks to the Hammerhead USB-C ANC’s engaging performance.