Razer has gone all-out with the DeathAdder V2 Pro, featuring a 20,000 Focus+ sensor, HyperSpeed wireless connection and crisp chroma lighting. This mouse is ideal for those gamers looking for the complete package, but I can't help but feel that a doubling in price for a wireless version of a less-than-year-old mouse is a tad expensive.

With its all-conquering DeathAdder V2 Pro, Razer has made one of its most infamous and best gaming mice wireless – which looks to be an inspired decision.

Packing both a 20,000 DPI Focus+ sensor and classy RGB lighting courtesy of Razer Chroma, as well as that classic design, the DeathAdder V2 Pro offers the complete package and is one of the absolute best gaming mouse options available.

Given its status, and also the features the DeathAdder V2 Pro packs, it should come as little surprise that this peripheral comes at a premium price. On both Razer’s official website and plenty of other retailers, the wireless DeathAdder goes for a cool £129.99/$129.99.

For a wireless mouse designed for more advanced gamers, this price seems fair; and it’s in line with the competition. However, it’s double the cost of the wired variant, the DeathAdder V2, which will make some question how worthwhile the upgrade really is.

As far as gaming mice go, you’ll be hard-pressed to find a more comfortable mouse than the DeathAdder V2 Pro. Its contoured shape and palm grip, along with rubberised sides, make it one of the best mice to use during long gaming sessions.

Compared to its wired counterpart, the DeathAdder V2 Pro is a little heavier, coming in at 88g or so. As such, for some it might prove too heavy for some; but for me, it felt just right, as I prefer mice at the slightly heavier end of the spectrum.

Note, however, if you like your mice heavier there isn’t a way to add any additional weights, as you would with other wireless mice at this price. One such example is Logitech’s incredible G502 Lightspeed, which is the company’s own reinvention of a veteran gaming mouse. 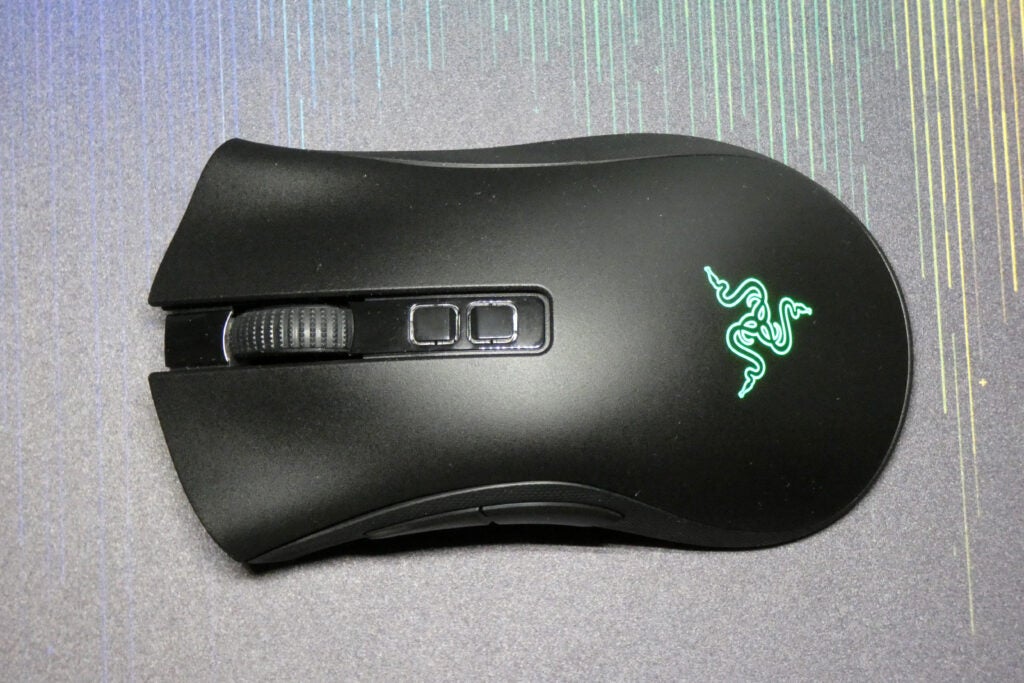 There are a couple of buttons that switch through the five-stage DPI sensitivity settings, as well as the more traditional forwards and backwards units; there’s also a button on the bottom that flicks between profiles on Synapse 3 (Razer’s gaming software).

Interestingly, Razer has decided to retain the micro-USB port for charging. It would have been nice to see a Type-C port instead – it is 2021, after all – but it’s not a huge deal since you get a charging cable in the box.

Alongside its wired counterpart, the DeathAdder V2 Pro has PTFE mouse feet, and as such has this unparalleled ability to glide across the surface to offer a degree of freedom that not even Razer’s own SpeedFlex cable can match. The DeathAdder V2 Pro is also compatible with Razer’s micro-USB-powered RGB charging dock, much like the Basilisk Ultimate, but you’ll need to buy that separately.

There are no notable changes with the DeathAdder V2 Pro when it comes to the sensor the mouse uses over the previous revision. Much like the original DeathAdder V2, the uber-sensitive 20,000 DPI sensor is absolutely perfect for high-intensity battles.

In FPS games such as CS:GO, the DeathAdder V2 Pro’s performance was absolutely seamless, with Razer suggesting the HyperSpeed wireless technology makes this mouse 25% faster than any other wireless models out there.

However, there didn’t appear to be any issues of latency on a Bluetooth connection either, and considering the DeathAdder V2 Pro also features Bluetooth 5.0, the difference between the two seemed pretty negligible through testing. 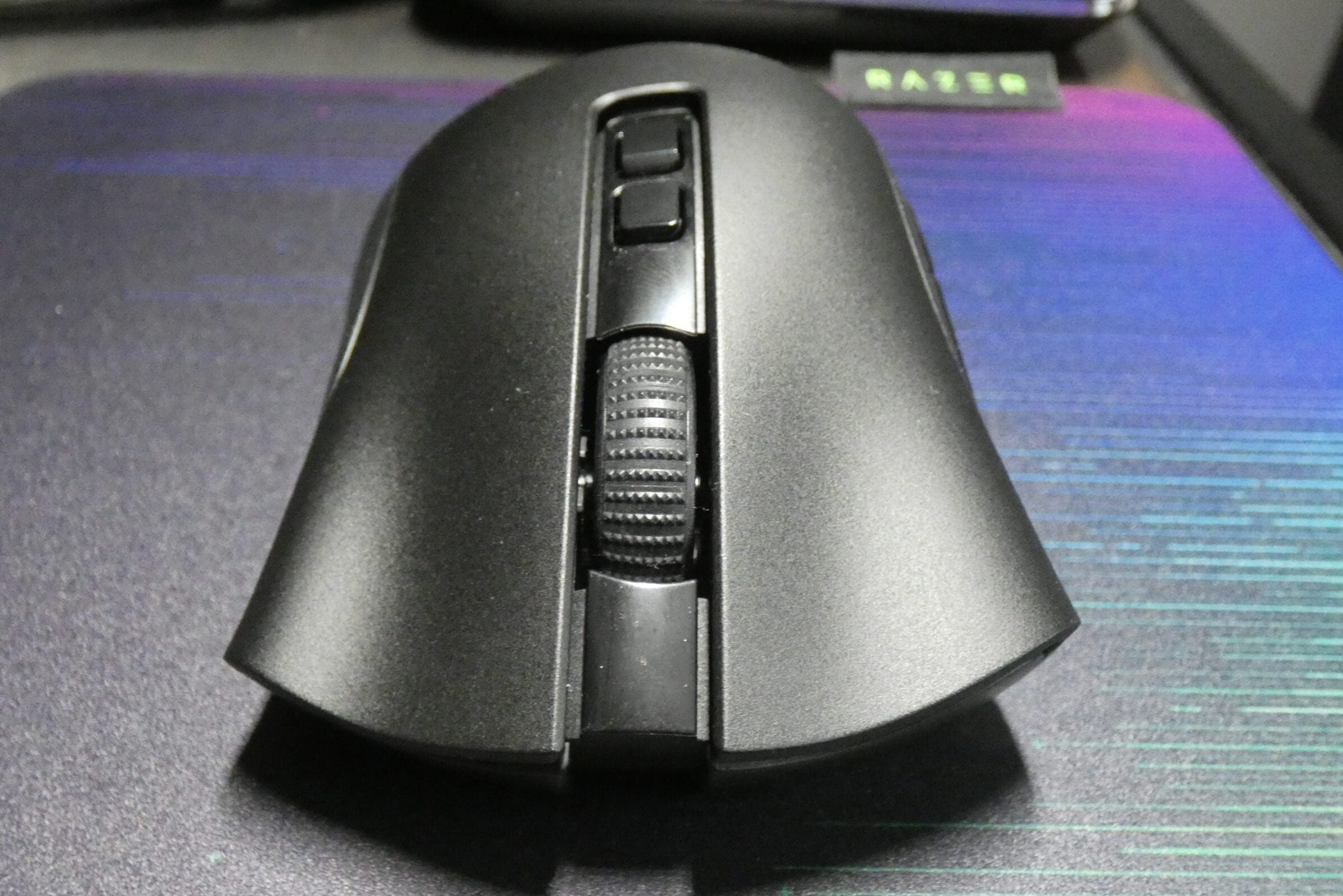 As mentioned previously, the DeathAdder V2 Pro also makes use of Razer’s second-generation optical switches, which work via light beams as opposed to more traditional mechanisms. This helps to make the mouse’s clicks even quicker, meaning that this mouse will afford you an even bigger competitive advantage than one featuring mechanical switches.

Battery life is pretty decent too, with the DeathAdder V2 Pro offering 70 hours on the HyperSpeed receiver and 120 hours on Bluetooth. This is comparable to some of Razer’s other premium mice, including the Basilisk Ultimate, and similar to offerings from Logitech and HP.

Software and lighting – Synapse 3 and Chroma does it again

Despite featuring only one lighting zone – the Razer logo – the DeathAdder V2 Pro’s backlighting is still classic Razer, in terms of its brightness and sharpness trumping the competition.

Out of the box, the chroma lighting utilises a colour spectrum that’s pleasing and easy on the eye – although, when making use of Synapse 3, it is possible to go all Pink Floyd with some of the customisation on offer. This is backed up by some of its more off-the-wall options, such as the now-infamous Audio Visualiser, where lighting is able to match up with any audio playing via your computer.

As such, you can experience an entire concert in one small corner of an office or bedroom. In my experience, the lighting with the Visualiser was a tad hit and miss, only on songs or clips with either super-quick or intricate sounds. 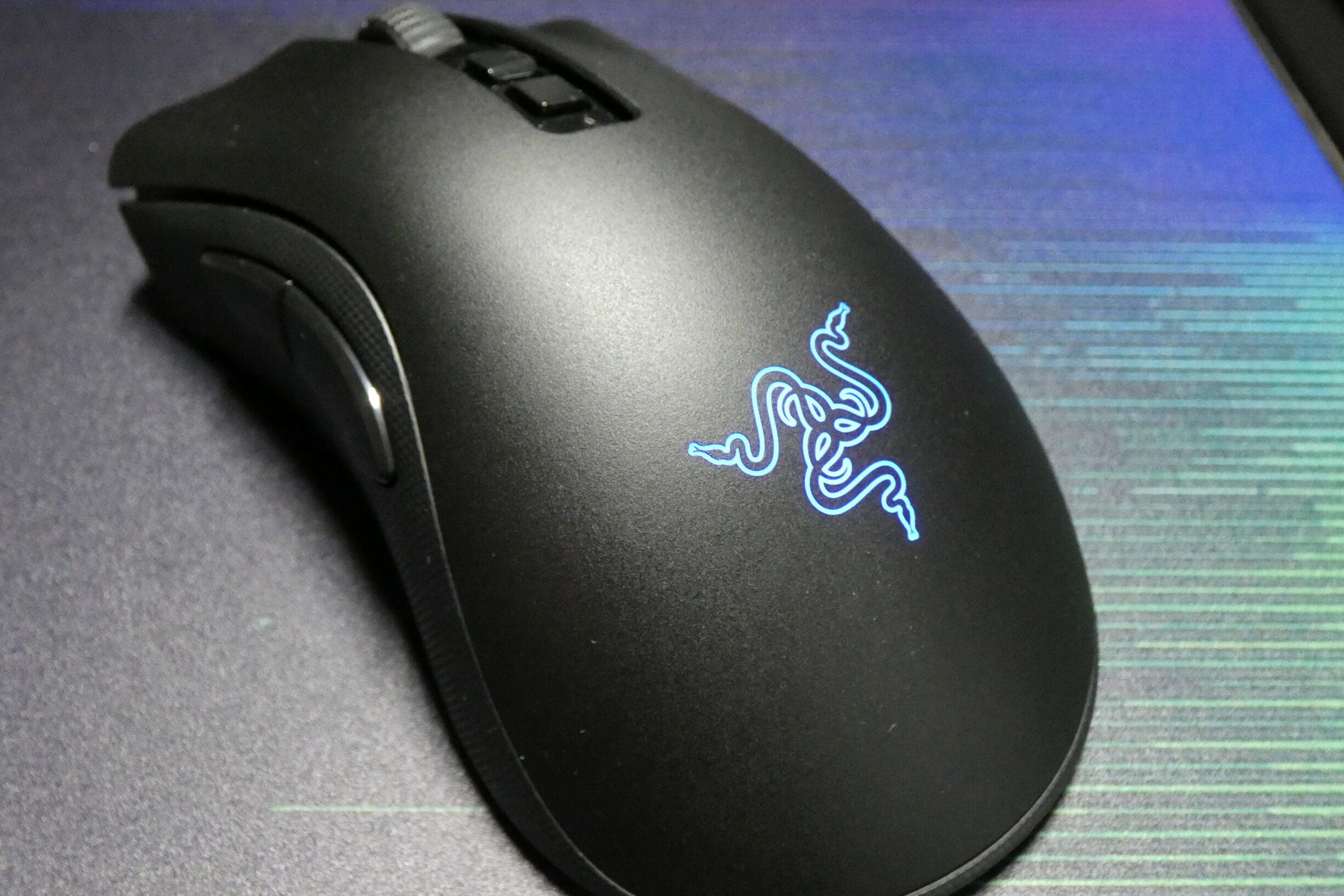 Synapse 3 also allows programming of the mouse’s eight buttons, which can be doubled to 16 when using the Hypershift function, as well as providing the ability to program any macros and remap to basically any other function. Razer’s software also makes all of this quick and easy to do so.

The chroma system also allows for connection to other devices, such as the Phillips Hue home lights, so you can build an RGB kingdom beyond your office or bedroom. The ability to tie the lighting with a whole host of other devices is a really cool idea.

You should buy the Razer DeathAdder V2 Pro if…

You should not buy the Razer DeathAdder V2 Pro if…

By Reece Bithrey Contact via Twitter
Reece has been writing for Trusted Reviews since June 2019 on a freelance basis thanks to a few day’s work experience. In particular, he covers all things peripherals, be it mechanical keyboards with …