The Razer Book 13 is one of the most powerful Windows Ultrabooks available, flaunting some serious style with its skinny screen bezel. But the extravagant price for this laptop is hard to swallow, especially with stingy SSD storage and the omission of a fingerprint scanner.

Think Razer is exclusively a gaming brand? Think again, as the new Razer Book 13 laptop is designed for productivity tasks, putting it more in line with a Dell XPS 13 or a MacBook Air than a Razer Blade 15.

With no discrete GPU to its name, the Razer Book 13 can’t hack AAA gaming or demanding content creation, and is even weaker than the existing Razer Blade Stealth.

Instead, Razer is looking to expand its remit beyond the gaming industry, offering up a 13-inch display laptop that excels at day-to-day tasks. But can it compete with the likes of Apple, Dell and Microsoft in the quality stakes? Absolutely – although it will cost you a pretty penny.

I fell in love with the Razer Book 13’s design almost instantly. That’s mainly because of its screen, which has a bezel so thin it’s hardly visible. It’s surprising how much of a difference removing the laptop’s chin can make to its visual appeal, but there’s no doubt the Razer Book looks significantly better than the Razer Blade Stealth.

Such a design trend is hardly new, with Dell XPS 13 having rocked the same look for over a year now. But Razer is one of the first laptop manufacturers to catch up, making the Surface Laptop 3 and MacBook Air M1 look old hat in comparison. 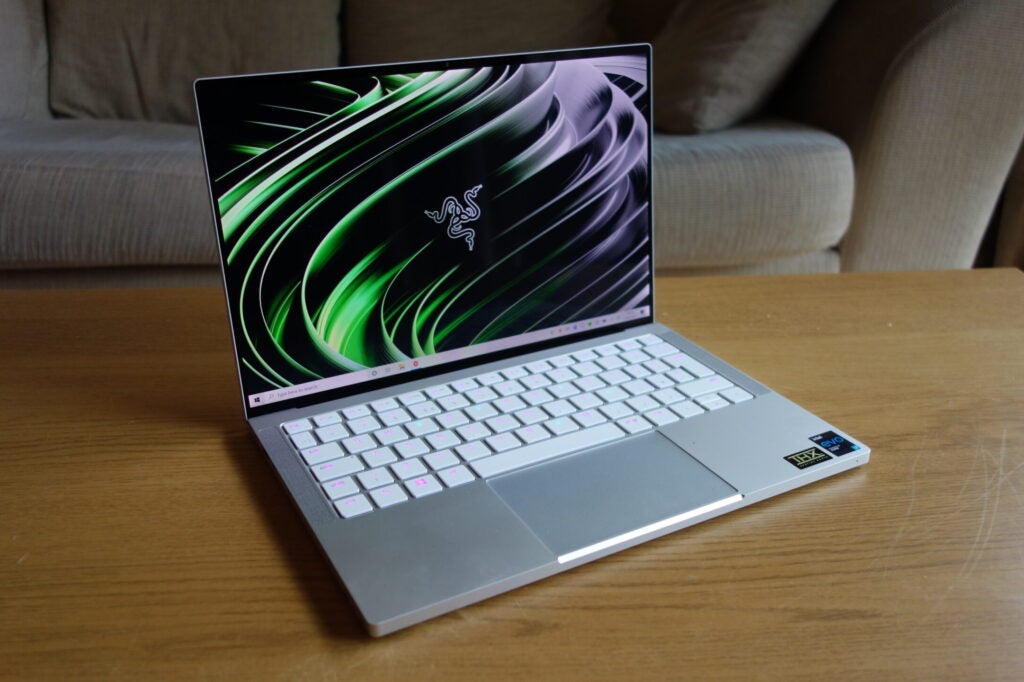 Build quality is outstanding, with the Razer laptop made from CNC anodized aluminium, which puts it on a par with the Blade 15. You won’t find any flex by pushing on the deck or screen, which makes me confident it will be able to withstand heavy knocks and live to tell the tale.

The only Razer Book 13 colour option is mercury, which has divided opinion at Trusted HQ. Some say the silver colour looks very old-school ‘90s, while others quite like the subtle styling when compared to the black/green colour combo of the Razer Blade 15.

The use of customisable RGB lighting on the keyboard feels out of place in a non-gaming laptop, but it at least adds a bit of colour to the mercury unibody and helps to differentiate this machine from the dozens of other lifestyle laptops at this price point. 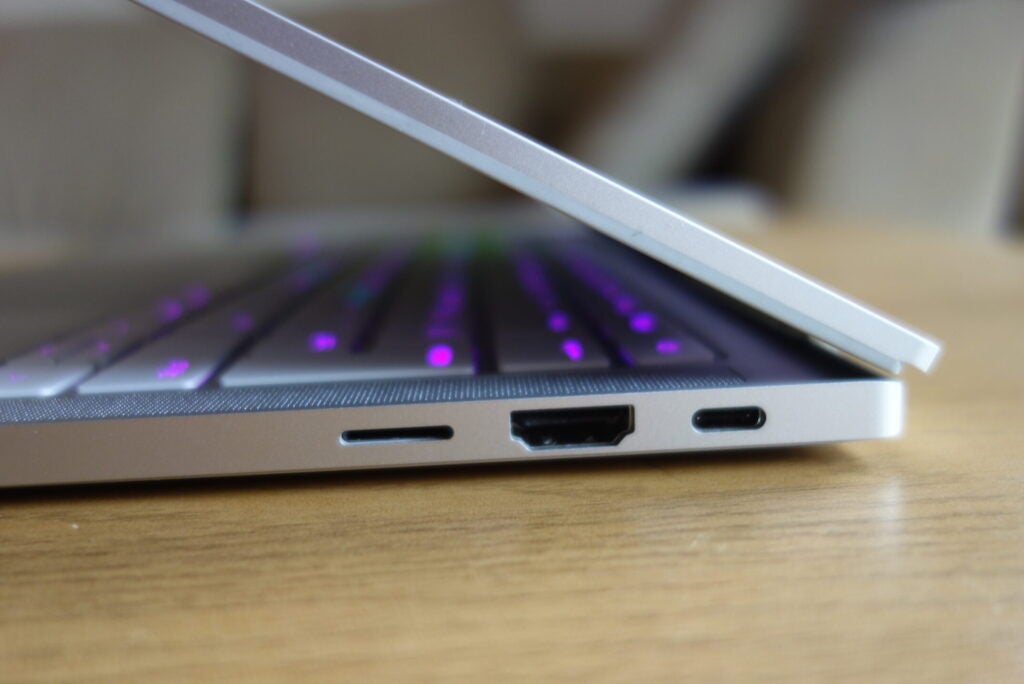 Razer has made sure this Ultrabook is adequately slender to squeeze inside a bag, measuring in at only 15.15mm. Hitting the scales at 1.4kg, the Razer Book 13 is comfortably light enough to carry around without feeling weary on your arms, although rival laptops – such as the 1.05kg Acer Swift 5 – are noticeably lighter.

Despite opting for a skinny frame, Razer has included a generous number of ports: USB-A, 2x Thunderbolt 4 (USB-C), HDMI 2.0 a MicroSD slot and headphone jack all make the cut. With many high-end laptops recently snubbing USB-A, its inclusion here shouldn’t be sniffed at, especially if you use plug-in peripherals or USB flash drives.

Razer has also managed to squeeze in a 1-megapixel webcam above the screen, so you don’t have to let video callers suffer an upshot of your nostrils. The webcam features Windows Hello support for facial recognition sign-ins, although I remain disappointed by the omission of a fingerprint scanner. 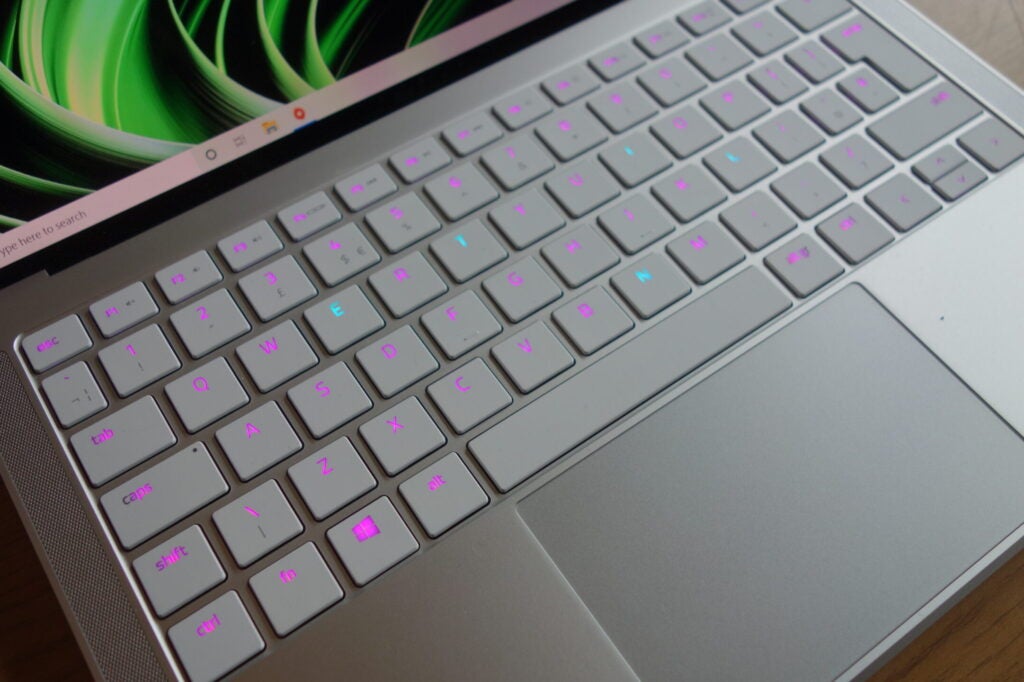 Just like with the Razer Blade 15, the Book 13 features up-firing speakers on either side of the keyboard. This prevents the audio from becoming muffled against your desktop, ensuring loud and detailed music when blasting out Spotify.

The keyboard is decent, with chunky keys allowing for satisfying typing. There’s no crunch to each key press, but they’re reasonably silent – which is important for shared work spaces. The trackpad also nails the essentials: it’s large, responsive and smooth to the touch.

Display – Optimised for productivity instead of gaming

The Razer Book 13 features a 13.4-inch screen, which is marginally larger than usual as a result of the tiny bezel. The laptop’s display has a 16:10 aspect ratio, which results in a square shape ideal for website browsing. This is a very trendy move, with an increasing number of laptop manufacturers ditching the rectangle-shaped 16:9 format optimised for video.

There are both Full HD and 4K displays on offer here, with the latter of the two demanding at least £1999.99 for the privilege – that’s criminally expensive when you consider a 4K Dell XPS 13 can be purchased for £1399.

That said, the Razer Book 13 undoubtedly has a fantastic display, with a high brightness of 479 nits (the average is 300) to ensure colours look bold no matter the lighting conditions. 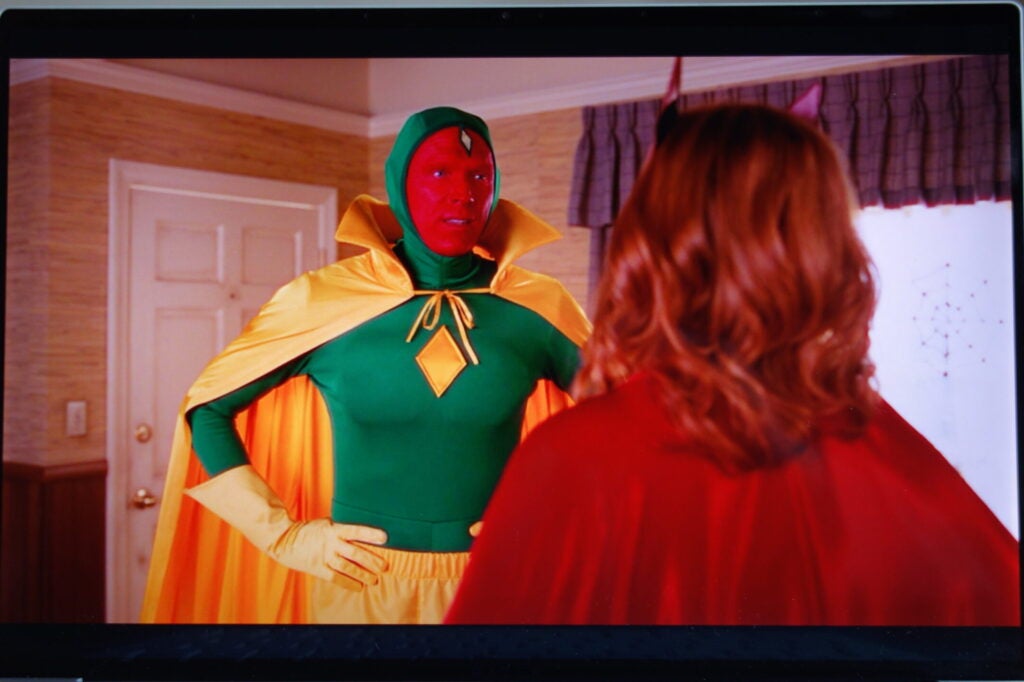 Contrast is also high at 1566:1, making the Book 13 an excellent companion for Netflix, Disney Plus and co. It does slightly struggle with dark and shadowy scenes, with the 0.31 black level not low enough for the likes of American Horror Story and Daredevil.

Colour accuracy is high enough for viewing digital art and watching films (with an sRGB gamut of coverage of 97%), but the Adobe RGB and DCI-P3 coverage isn’t quite good enough for professional-grade content creation.

Since the Razer Book 13 isn’t a gaming laptop, it should come as no surprise that the refresh rate is capped at a low 60Hz. Instead, you get the option of a touchscreen to make social media scrolling more seamless, although the laptop can’t be flipped back into tablet mode if you’re looking for a convertible device.

The Razer Book 13 only has two processor options: the Intel Core i5-1135G7 and Intel Core i7-1165G7. Razer sent me the latter, which offers blazing-fast speeds that will happily coast through day-to-day workloads. To be honest, either option should serve you tremendously well if you’re just looking for a laptop for the office or university lecture hall.

The i7 model in my possession blasted through productivity tasks with ease. I never noticed slowdown when having multiple web browser tabs open, or even when cropping and editing photos. It was an absolute pleasure to use.

Razer also allows you to boost the performance even further via a setting in its Synapse app, although this will make the fans irksomely noisy. I suggest keeping to the default performance settings unless you’re throwing particularly demanding workloads at the Razer Book.

Our benchmark results show that the Razer Book 13 is even more powerful than the Dell XPS 13, with the company allowing its laptop to turbo-boost with speeds up to 4.7 GHz. In fact, its single-core performance usurped every other Windows-based Ultrabook we’ve ever tested, yet still couldn’t match the MacBook Air M1.

The one area that the Razer Book 13 trumps the MacBook Air is for gaming performance, with its integrated Intel Iris Xe graphics allowing it to run select games at reasonable frame rates in 1080p. Again, this isn’t a proper gaming laptop, so don’t expect it to run the likes of Cyberpunk or Hitman 3. Nevertheless, Fortnite and Minecraft fans can find some joy here. If gaming is a priority, buy the Razer Blade Stealth or Razer Blade 15 instead.

Read and write speeds were fairly high, but unspectacular, coming in at 2285 MB/s and 1070 MB/s respectively. This means it should offer decent speeds when saving or loading data on the physical SSD drive – but there are speedier alternatives out there, including the Dell XPS 13.

The biggest issue here is the storage capacity, with the two most affordable models only packing 256GB of space, which is extremely stingy. You should be getting 512GB at the very least when spending £1500+ on a laptop.

Battery – Great stamina, but not the best

The arrival of Intel’s 11th-generation processors may offer a performance boost, but it’s actually the battery efficiency I’ve found to be the main selling point – and it has struck again to give the Razer Book 13 healthy stamina.

In order to test the battery, we reduced the screen brightness to 150 nits and ran the PCMark 10 office battery benchmark, which simulates day-to-day office tasks on a loop until the battery tank is depleted. 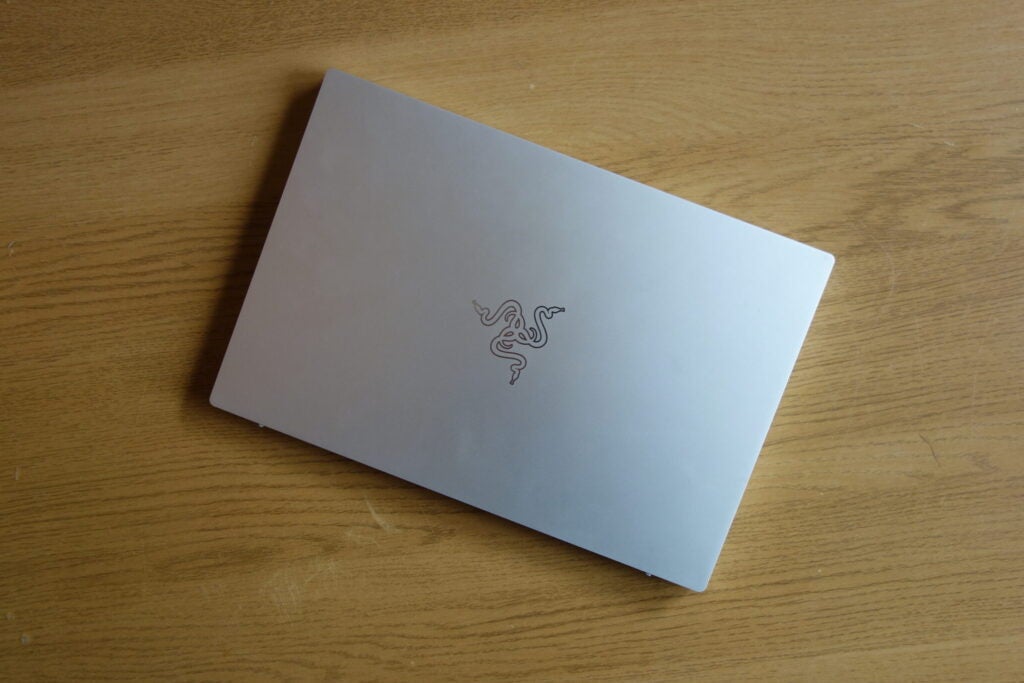 The Razer Book lasted 10hrs 50mins before the battery was completely drained, which backs up my experiences for real-time use. I was able to use this laptop throughout the working day and still have juice to spare by the end.

That’s a good result, although it still lags behind the likes of the Acer Swift 5 and Lenovo IdeaPad Slim 7, which continued to chug along for an additional 3 to 4 hours. But since the Razer Book 13 is more powerful than most Ultrabooks, it’s understandable that its battery life takes a slight hit.

The Razer Book 13 is an impressive Windows laptop, featuring a cutting-edge design, optional 4K touchscreen, and one of the most powerful performances we’ve seen in an Ultrabook – although it still lags behind the MacBook Air M1.

But Razer is charging far too much for its new laptop, especially since you’re getting only a 256GB SSD with the base models and miss out on key features such as a fingerprint scanner.

Nevertheless, the Razer Book 13 remains a high-quality laptop, but I’d recommend checking out the Dell XPS 13 before purchasing, since it offers a more complete package at a better price.

You should buy the Razer Book 13 if…

You shouldn’t buy the Razer Book 13 if…