If you're looking for an Ultrabook that can also handle a bit of casual gaming alongside day-to-day work, the Razer Blade Stealth certainly looks like your best bet from first impressions. Whether it offers the powerhouse performance that Razer claims remains to be seen though.

The Razer Blade Stealth 2019 is a refresh of Razer’s Ultrabook lineup. Althought the device has a Razer logo slapped on the lid, the Blade Stealth isn’t strictly a gaming laptop.

With the two high-end “Graphics” models featuring a Nvidia GeForce MX150 graphics card, the Razer Blade Stealth may be able to handle the likes of Overwatch and Fortnite, but it’s no match for recent AAA titles such as Shadow of the Tomb Raider and Call of Duty: Black Ops 4.

Instead, the Razer Blade Stealth is aimed at students and mobile professionals who like to occasionally dip into a bout of casual gaming on their lunch break. 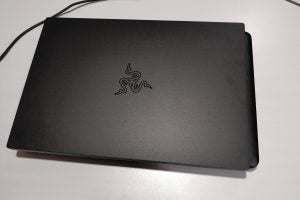 The range brings some considerable improvements since the previous offering, including a gorgeous new design, the super-speedy i7 Whiskey Lake processor, and the option of that Nvidia MX150 graphics card.

Best of all, with the base model weighing in at 1.28kg, this laptop is light enough to hold in one hand. In fact, it’s virtually the same weight as the Apple MacBook Air, meaning you can throw it into your rucksack without any worries of an achy back.

Razer Blade Stealth 2019 release date – When is it coming out?

Despite being the “2019 Edition” of the Razer Blade Stealth series, this Ultrabook is available to buy right now. You can order it from Razer’s website as well as selected retailers in Europe, US, Canada China and Asia-Pacific. Launching right before Christmas, the Razer Blade Stealth 2019 could make for a very nice present indeed.

Razer Blade Stealth 2019 price – How much will it cost?

However, if you want the Nvidia MX150 GPU to take your gaming performance up a level, then you’ll need to shell out a few extra hundred quid for the Graphics model, which costs £1499.99 in the UK and $1599 in the US.

The Razer Blade Stealth’s design follows a path similar to the MacBook Air – it’s thin, light and feels properly premium. This Ultrabook is designed for students and mobile professionals who want to travel as light as possible, but without having to sacrifice power.

Razer’s new Ultrabook is even more portable than the previous iteration. The bezel has been reduced so that you can hardly see it, while the laptop’s chassis also benefits from having a few millimetres shaved off the sides. The previous Blade Stealth is 16.4mm wider than the 2019 model. That may not sound significant, but you’ll likely find this new laptop is much easier to stow in your bag. 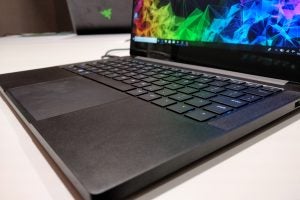 While an Ultrabook at its core, the Razer Blade Stealth also boasts some gaming flair. You get a flashy Chroma keyboard and Razer’s trademark emblem on the lid. That said, the emblem is just a black outline instead of Razer’s traditional illuminate green, so professionals can bring the laptop into work without fear of it becoming the talking point of the office.

The touchpad on this model gets the glass treatment, after it was such a stonking success on the Razer Blade 15. This means it’s even smoother than before, and is a real treat to use when aiming your rifle or even navigating Google Docs. 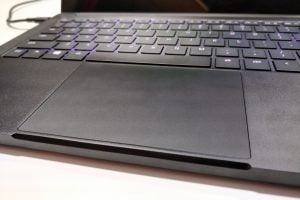 A pair of upward-firing Dolby Atmos speakers sandwich the keyboard. Crank up the volume right to the top, and you’ll easily be able to fill the room with the sound of bombastic explosions and gunfire.

My only real concern is the number of ports on offer. While you do get two USB-A ports, a USB-C port, a Thunderbolt 3 port and 3.5mm headphone and microphone combo port, that might not be enough for some gamers. With some external keyboards now taking up two USB-A ports and a mouse taking up another, you’d need to buy a USB hub to get all your peripherals working.

Then again, this Ultrabook prioritises portability over gaming, so it isn’t a huge surprise that Razer has been slightly stingy with its connectivity options.

Like most Razer laptops, the Blade Stealth 2019 has a glorious display. Colours were super-punchy whilst playing Overwatch, with Razer suggesting that both the Full HD and 4K models offer 100% sRGB gamut coverage. That’s a big claim, which we’ll be sure to put to the test when we get our hands on review models. 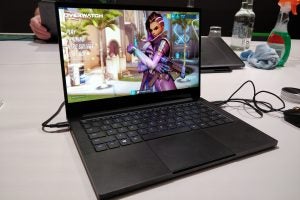 I’ve got my reservations over whether the 4K model is worth the bother, though. While the Nvidia GeForce MX150 GPU is certainly an upgrade on the Intel Graphics UHD 620, it’s by no means meaty enough to run games smoothly in Ultra HD. This means you’ll only really be able to use the 4K display for video with YouTube and Netflix. If that’s what you want, then that’s fine, but don’t expect to be able to do 4K gaming on this.

The Razer Blade Stealth 2018 houses Intel’s super-speedy i7 Whiskey Lake processor, meaning that this should be one of the fastest Ultrabooks around. The mid-range and high-tier configuration also include 16GB of RAM, just to ensure that this will run as smoothly as possible.

The optional Nvidia GeForce MX150 graphics card should also prove a substantial step up from the standard Intel Graphics UHD 620 GPU. Of course, this upgrade still isn’t beefy enough to play modern AAA games, but it’s sufficient for indie games such as Rocket League and Hollow Knight, as well as popular multi-player shooters such as Fortnite.

I was able to play a few rounds of Overwatch in Full HD on the Razer Blade Stealth. Performance was buttery smooth, with the frame rate hovering around 70fps. Of course, since this was a hands-on demo in a controlled press environment, I’ve no idea how it will perform in everyday circumstances. I’ll update this article as soon as we get in our own review model(s) and have been able to put everything through our own testing processes.

I came away seriously impressed with the Razer Blade Stealth 2019. While there haven’t been a huge number of changes from the previous model, the introduction of a beefier graphics card, the Whiskey Lake CPU and an even sleeker design could well amount to a far superior Ultrabook.

I was very impressed with how well this machine ran Overwatch, and I’m keen to see how it performs with other games in our own test conditions. Of course, this isn’t a full-fat gaming laptop, but if it can run games such as Fortnite and League of Legends as well as Razer claims, then the Razer Blade Stealth 2019 looks an excellent option for sneaking in a few hours of gaming between spreadsheets and essays.