The Razer Blade 15 Studio Edition provides creative professionals with an appealing invitation to opt for a high-end Windows machine. The screen is stunning, the keyboard is a dream and its size is surprisingly manageable, but the biggest hurdle remains price. If you feel you can push this device to its limits then you won’t be disappointed – otherwise, there are cheaper options to consider.

The MacBook Pro has been the go-to device for creative professionals for many years now. The Razer Blade 15 Studio Edition looks to usurp the MacBook Pro 16 with an ultra-premium laptop to handle almost anything you can throw at it.

The Razer Blade 15 Studio Edition is part of Nvidia’s Studio programme, which rubber stamps laptops that meet the lofty hardware and software requirements to suit the needs of professional creators.

Our review unit of the Razer Blade 15 Studio Edition features a Quadro RTX 5000 card, which packs even more power than your traditional GeForce GPU, but is intended for workstations opposed to gaming.

There’s no getting around the fact this is a large and heavy machine. However, considering what it offers in terms of performance, you may end up being surprised that it’s portable at all, never mind that it looks this good too.

The weight of the Razer Blade 15 Studio Edition comes in at 2.21kg – that’s a good bit more than the 2kg of the MacBook Pro 16, but still manageable enough to stick in a bag. 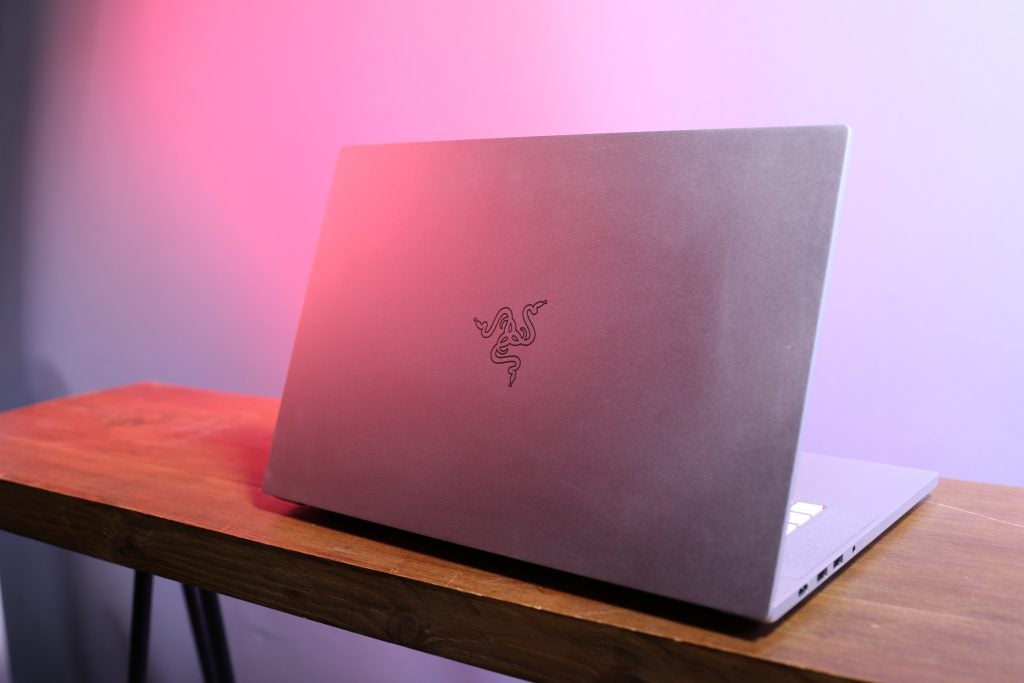 When it comes to looks, this laptop has it. Outside of Apple’s MacBook Pro, high specs can often lead to a garish device, but this simple design is really nice.

The only colour available is Mercury White (basically silver with white keys), differentiating this creative laptop from Razer’s traditional black and green colours. The keys are backlit too, and offer comprehensive yet easy-to-use customisation via Razer’s Synapse programme.

For ports, this thick laptop offers a respectable selection. There’s a headphone jack, three USB-A ports, a Thunderbolt 3 USB-C port, a Mini DisplayPort and an HDMI – not too shabby at all. 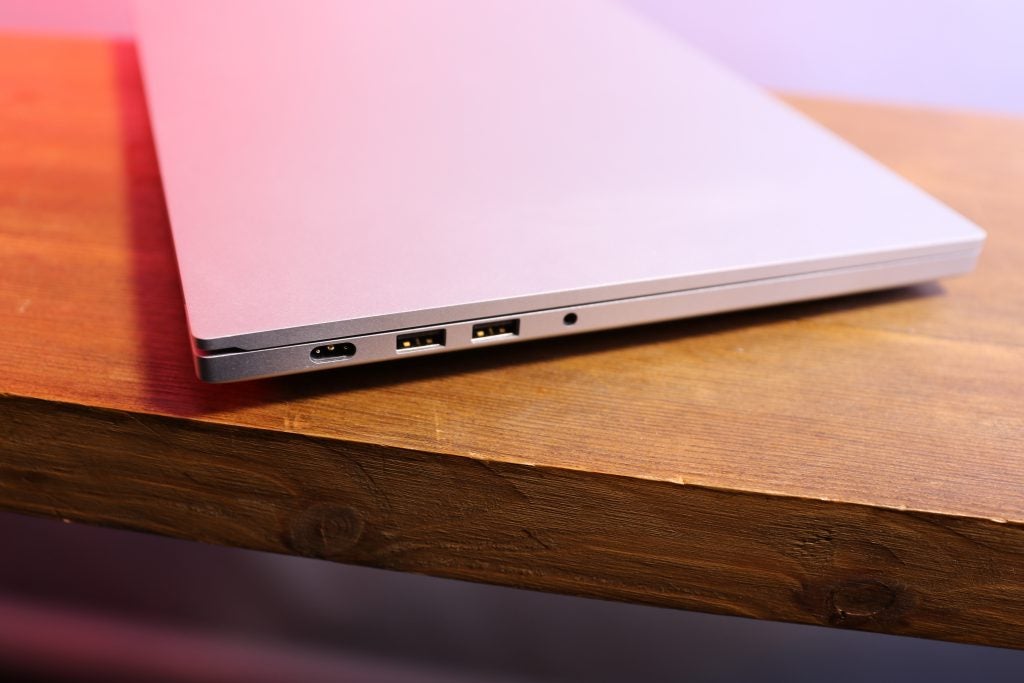 A quick note on the performance of the onboard speakers – they really aren’t very good. As a professional, you’ll definitely want to pair it with some headphones or external speakers. The Razer’s integrated speakers are passable if you rarely use them, but they’re far from delivering high-quality sound.

The Razer Blade 15 Studio Edition offers one of the best laptop keyboards on the market. Aside from the aesthetically-pleasing backlighting, the keyboard offers a clicky and comfy – but not too loud – experience that will leave you happily typing away for hours.

The components of this laptop are a remarkable combo, however, as soon as I started using this device, I was disappointed with the trackpad. 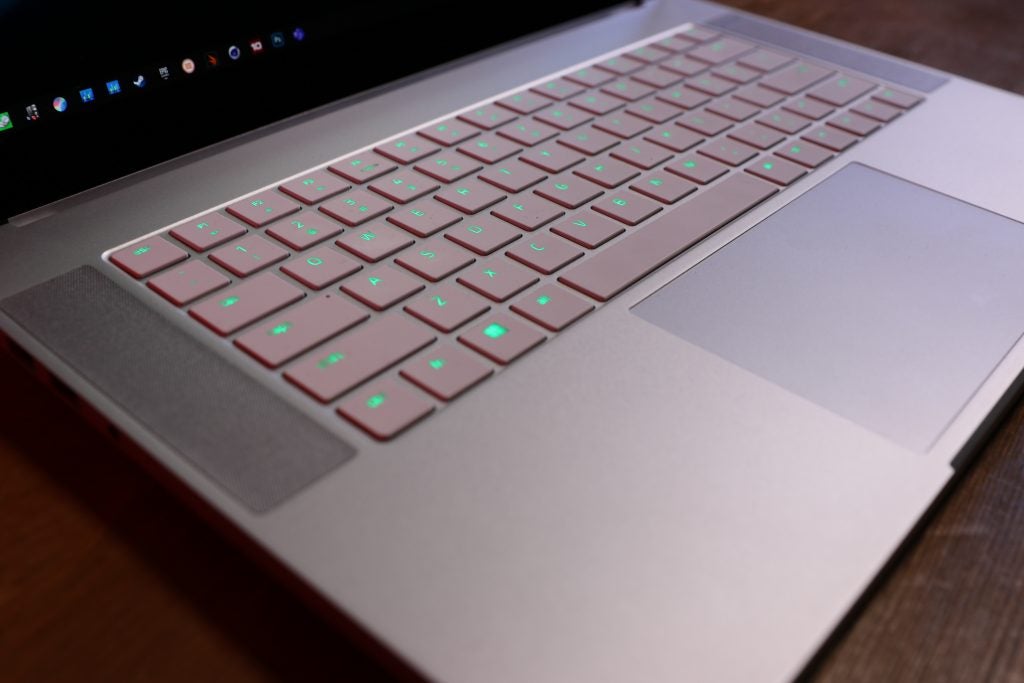 This is a quality machine from top to bottom, but the trackpad offers shockingly little travel and I found it super frustrating.

Don’t get me wrong, the trackpad is far from unusable and, towards the front, it’s almost as clicky as you’d want. However, in general use, it really doesn’t meet the high standards of this pricey machine. You’ll want to use a mouse for design work.

More and more premium laptops are getting the 4K OLED treatment and, wow, are we thankful.

From the HP Spectre x360 13 to this particular laptop, these displays are phenomenal, providing remarkably accurate colour for creative work and beautiful pixels aplenty for watching movies or playing games. This display is a touchscreen too – a welcome cherry on top of the cake. 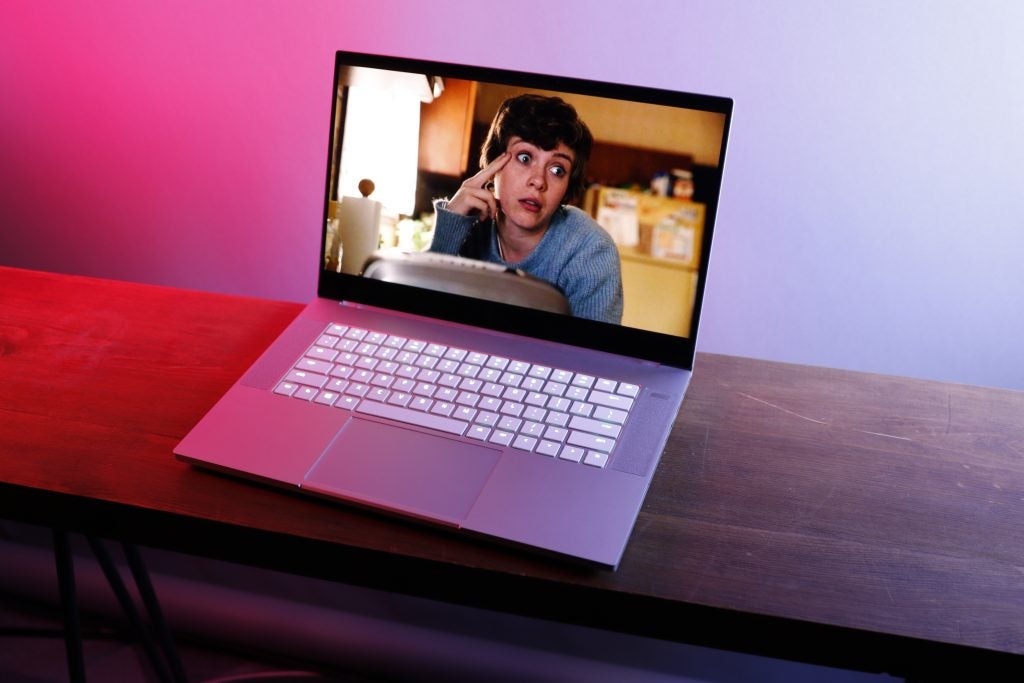 The only area for improvement, which appears to be the case across 4K OLEDs on Windows machines, is the colour temperature. This laptop comes in at 6123k – giving the screen a slightly warmer-than-neutral colour appearance. By comparison, the MacBook Pro 16 offers 6412k – with 6500k being the ideal as this equates to natural light. Only the most pedantic will find this an issue, though.

This mobile workstation is one of the most powerful Windows laptops we’ve tested and – when it comes to its chops as a creative device – our tests show it to be circling the top of the mountain.

For testing this laptop, we broke out a range of run-of-the-mill benchmarks but also enlisted help from Trusted Reviews staff who tackle creative tasks on a daily basis – our graphic designer and our video producer. 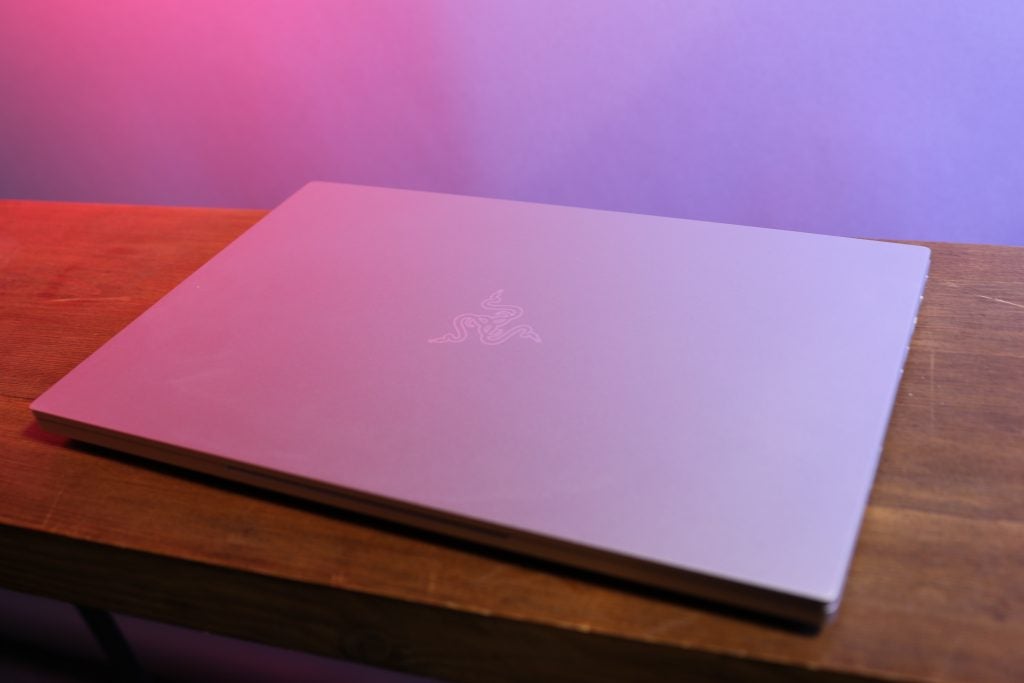 We also threw a 1GB image at the machine – testing both import and export time, along with seeing if performance was affected when we manipulated the image. No trouble for the Razer, which managed the export in under five seconds and allowed for instantaneous manipulation.

We upped the stakes to a 10GB image and the results were the same – the Razer didn’t flinch. We executed a transform on the gargantuan image and it was done in less than 30 seconds. This export took slightly longer, at just over five seconds, but it’s still a stunning feat.

Along with the beastly GPU, these results were also likely assisted by the speedy SSD onboard – offering 2,573MB/s read speeds and 2,825MB/s write speeds.

One performance-related downside of this laptop is that it can get very, very hot. When running creative software or games, the Blade 15 Studio Edition gets noticeably warm on the top and the underside can be scorching – seriously, do not use this laptop on your lap if you are going beyond basic browser work.

The Studio Edition isn’t designed specifically for gaming, but unlike a MacBook Pro 16, it can game – and respectably so. We ran our tests sticking with the Studio drivers as even though Nvidia’s Game Ready drivers are available to download, you probably won’t want to go through the process of switching drivers every time you fancy a round of Apex Legends.

The RTX Quadro 5000 in this machine impressively tops the 3DMark performance from the RTX 2080 MaxQ inside the regular Razer Blade 15 we tested – a stunning feat given the RTX 2080 MaxQ is the best gaming-focused mobile GPU that Nvidia currently offers.

Our 4K game benchmarks turned up some impressive results, with older titles more or less hitting the 60fps mark. However, this isn’t too different from what you can expect from a Razer Blade 15 with RTX 2080 GPU, which can be had for a few hundred quid cheaper.

We recommend you don’t shell out on the Razer Blade 15 Studio Edition if gaming is your priority, as you can spend less for a similar performance. However, if you’re a creative professional who’s a gamer too, it’s a cracking bonus.

The battery life is far from being the Razer Blade 15 Studio Edition’s best feature, but it’s still impressive despite only managing just under six hours of battery in our benchmark testing.

This is one of the most powerful machines we’ve tested and it sports a corker of a 4K touchscreen, so anything other than abysmal battery life – probably less than four hours – won’t draw criticism from me. 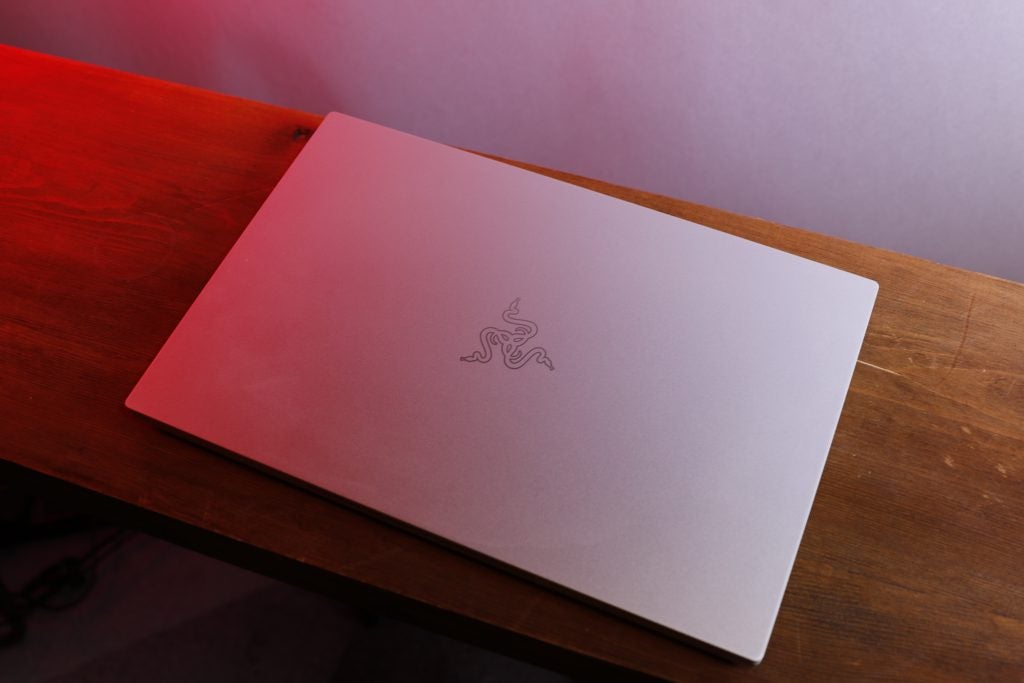 The Razer Blade 15 Studio Edition is a machine you can lug around if needs be, but it is really meant to sit on a desk – it’s far from a coffee shop device.

This is why I think six hours is perfectly fine – you’ll be at a desk with an outlet most of the time, but the battery it offers is just enough to deal with any awkward situations where power isn’t available.

Bear in mind, we deactivated the keyboard’s backlight, turned down the brightness to 150 nits and simulated web browsing and video streaming (via Powermark) to achieve this figure. If you’re editing video or gaming, expect the battery life to be much lower.

Should you buy the Razer Blade 15 Studio Edition?

The Razer Blade 15 Studio Edition is an absolute dream for graphic designers, video editors and other creators who need as powerful a portable as possible.

If the goal of the Razer Blade 15 Studio Edition is to show that creatives can consider Windows again, then it truly does the job. The only hang-up is the price, but it’s still in line with what is on offer from other Windows workstations and remains a cracking investment if you’ve got the dosh.

You have to be really mindful whether you’re actually going to make use of all that GPU grunt though. If you’re looking for a general laptop, or something that specialises in gaming, then you shouldn’t entertain the idea of buying this device.

The Razer Blade 15 Studio Edition will even be too powerful for some media professionals. The MacBook Pro and Razer’s own regular Blade 15 are both cheaper alternatives, and while you won’t get the same level of performance, they’re still very capable of editing and video and rendering animations.

The Razer Blade 15 Studio Edition provides creative professionals with an appealing invitation to opt for a high-end Windows machine. The screen is stunning, the keyboard is a dream and its size is surprisingly manageable, but the biggest hurdle remains price. If you feel you can push this device to its limits then you won’t be disappointed.