What is the Razer BlackWidow X Chroma?

Razer’s latest gaming keyboard is a intriguing prospect – a high-end mechanical unit that doesn’t use the near-ubiquitous Cherry MX switches.

The £125 BlackWidow X Chroma isn’t the only keyboard I’ve seen to eschews Cherry hardware. The SteelSeries Apex M800 also opted for its own switches, and that unit made a good impression.

Razer’s new mechanical switches are designed to “actuate at an optimal distance”, to provide the best speed and responsiveness for fast-paced gaming. In plain English, this means that Razer’s keys have a 1.9mm actuation point, which is between 0.1mm and 0.3mm less than conventional Cherry MX keys. In practical terms it means buttons don’t need to be pressed down as far to register a click. 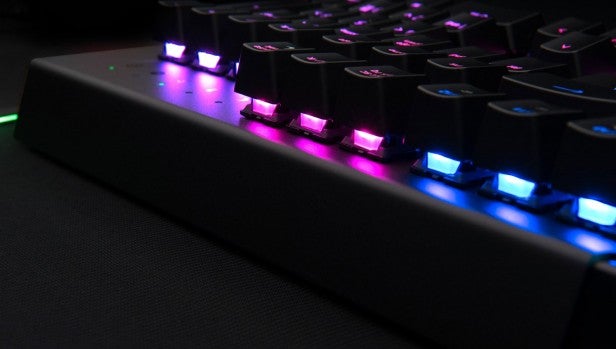 The Razer’s keys also have a 0.4mm reset point, so buttons don’t have to bounce back as far to be ready for another input. That, again, is a little lower than Cherry’s hardware.

Razer has developed these switches to enable keys to be hit with more speed than conventional Cherry keys, but it’s worth bearing in mind that SteelSeries has gone further: the M800’s keys have an actuation point of only 1.5mm. While this will make the buttons feel shallower than the Razer’s keys, some users may prefer that lighter typing mechanism.

The Razer’s heavier touch is borne out by its 50g operating force. That falls between the most common Cherry switches, but it’s 5g more than is required to register a key press on the SteelSeries unit.

The BlackWidow X Chroma is packed with its own hardware, and it’s been built to handle plenty of action. Razer says this unit has an 80 million keystroke lifespan – 20 million more than the M800 although in real terms you’re likely to spill your Mountain Dew on it before the keys wear out.

There are several small differences between the two units, then, and they help to emphasise the different objectives of the BlackWidow X Chroma and the SteelSeries Apex M800 keyboards. 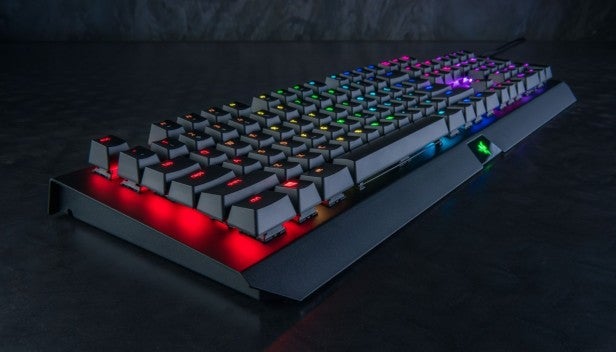 Razer’s device uses the firm’s green switches, which are designed for pure gaming performance. The M800 is specifically built to be lower-profile, and that more modest actuation level is designed to be quieter too.

Razer’s no-nonsense approach extends to the BlackWidow’s design. The basic base is made from steel, and is topped off by exposed keys. It’s far removed from the SteelSeries keyboard, which has more stylistic elements and noticeably shorter keys, but the Razer’s pared-back looks aren’t necessarily a bad thing.

The metal used throughout the keyboard feels stronger than the M800’s plastic, and there’s plenty of appeal to watching the Razer’s extensive backlighting glow from beneath the keys, illuminating the exposed mechanisms beneath each button.

There’s plenty to like about that lighting, too. The individually programmable RGB LEDs can produce 16.7m different shades, and their effects can be customised via software. That’s a similar setup to the SteelSeries.

In other areas, however, the Razer’s pared-back body means it’s missing some features. Unlike the SteelSeries, it doesn’t offer any USB ports, nor does it have dedicated macro keys; the M800 has six. There is a cable-routing trench on its underside, but in the box Razer doesn’t include replacement keys or a key-removal tool. At least the M800 has replaceable rubber feet.

The lack of macro keys results in a largely conventional layout, with media functions deployed to the function keys and a row of small LEDs in the top right for indicating various locks.

The Chroma’s features are controlled through Razer’s Synapse 2.0 software. It can appear a little silly that you have to register an online profile to use a keyboard, but this has to be done only once. And after that, Synapse 2.0 impresses.

The main keyboard menu allows for profile selection and saving alongside individual key assignments, and there’s a lighting tab that can also be linked to each profile. Fine-tuning is achieved in the Chroma Configurator section, where breathing, rippling and reactive effects can be chosen alongside various other light patterns. The WASD, arrow, function and number keys can all be highlighted using shortcuts, and the colour for every key can also be changed individually.

Gaming Mode can be used to disable keys that could ruin a crucial moment, and the Macro module records specific key-presses and chains of buttons. Macro recording is initially a little confusing, but it’s worth learning – and in that respect it’s no different to the same feature on the SteelSeries. The final options enable third-party apps to work with the Chroma keyboard and serve up keyboard usage statistics.

There’s nothing really missing here, and Synapse 2.0 can be used to manage various other Razer kit too – ideal if you partner a keyboard with a mouse.