The full-size textured plastic body of the 2019 Blackwidow being shown off here.

The 2019 edition of the Razer Blackwidow ticks some boxes in its revision, but lacks what some would perceive as basic functions that are available on the majority of the competition at this price. The clicky switches, flashy lights and bright colours can't really help Razer escape from this chronic underselling of a fan-favourite.

The 2019 edition of the Razer’s Blackwidow is an updated version of the manufacturer’s longtime flagship model, and with such a well-known name attached to it, this new Blackwidow has a lot to live up to.

Coming in at a cool £120, the new and updated Blackwidow is caught right in the midst of the upper echelons of the gaming peripheral market, with competition rife from firms such as Corsair, Coolermaster and others who provide ample alternatives. As such, the new Razer Blackwidow arrives under the weight of expectations.

On first impressions, the Razer Blackwidow presents itself in a pretty standard manner. It’s made of a hard-textured plastic as opposed to the aluminium casing that other manufacturers such as Coolermaster offer – although some brands do offer a bare-bones skeletal design, like Corsair. Even a faux aluminium finish like that from Alienware AW768, wouldn’t have gone amiss here. The textured plastic feels jagged and not at all ‘premium’, given the price.

The lock lights are placed under the nav cluster of keys (Insert, Home, Page Up/Down, Delete, End) and are pretty small and less prominent than I would have preferred when juxtaposed with the brightness  and colours of the Blackwidow’s backlighting. Perhaps they would have been better paired with different coloured backlights on the individual keys, as some other manufacturers offer.

Another design choice sees the space that would usually be filled with the lock lights is replaced by a small engraving of ‘RAZER’ into the keyboard’s plastic top-plate. Whilst this is somewhat aesthetically pleasing, it does seem a little form-over-function. Razer are the kings of keyboard design for many, but this feels like a little too much.

Otherwise, the keycaps feel nice under-finger, although, after less than a month of use, there is a lot of  ‘shine’ on the caps already. What would have be nice here are some harder wearing double-shot PBT plastic caps. That’s not unheard of at this price point, but also not common.

Unfortunately, there are no additional macro keys nor are there any dedicated multimedia keys These two features are a must-have in the modern market and competitors such as Logitech, who offer Romer-G switch keyboards for just over half the price of this 2019 Blackwidow, have both multimedia keys and a volume roller. This saves the effort of using the on-board multimedia secondary functions that this Blackwidow offers. Granted, you can buy the superior Blackwidow Elite that offers these features, but for £120, I would have expected better from Razer.

What I am happy to say is, that despite its somewhat non-premium feel, the new Blackwidow’s plastic body features little to no flex in the overall construction. Of course, it’s no IBM Model M – with a massive metal plate running through it – but for a plastic-bodied keyboard, the Blackwidow is impressively solid.

With the updated Blackwidow, Razer are offering their own green switch, that offers a clicky, tactile sound, but comes with a lighter actuation force than the Cherry MX blues, coming in at just 50cN. Normal and light linear switches tend to have a force of 45cN. For the tactile greens to have a force that’s a little heavier, but not noticeably heavier, is a bold move. To some, it may offer the best of both worlds, with a lighter touch that is complemented nicely with the audible click of the greens.

Razer appear to make these switches in-house, shying away from their former partners at Kalih, and personally speaking, the keyboard is the better for it. The switches feel decent to type on and where I’d usually be drudging through with some heavier key switches, the mix of both a tactile click and light actuation force makes for a great combination.

The one pretty noticeable issue is how loud these switches are. As with any audibly clicky switch and indeed, when writing this review, there were a couple of complaints from other people in the office about how loud the new Blackwidow is. If you’re alone in a bedroom or an office, it’s fine, but this keyboard shouldn’t really be used in more open spaces.

When playing games such as Hitman (2016) and Shadow of the Tomb Raider, the Blackwidow felt pretty responsive, and the full n-key rollover was very much appreciated as I took out targets with ease with Agent 47, or scrambled up the sides of ravines with Lara Croft.

When using driving games like Dirt Rally, despite having to use a keyboard, the Blackwidow rose to the challenge, and whilst it may not entirely rival the experiences of a gamepad or a racing wheel, it felt pretty good. One major thing was the feeling of a kind of force feedback when driving on different surfaces – driving in Finland in the Audi Quattro was different to driving down a twisty Monte Carlo road in the Mini Countryman.

Maybe this is more a prop to Codemasters than Razer, but it was really nice to feel the differences and not left in the dark about road surface – I’m someone who has used a wheel for a good few years and there are going to be teething problems with every hardware transition, but admittedly, this one was easier than expected. 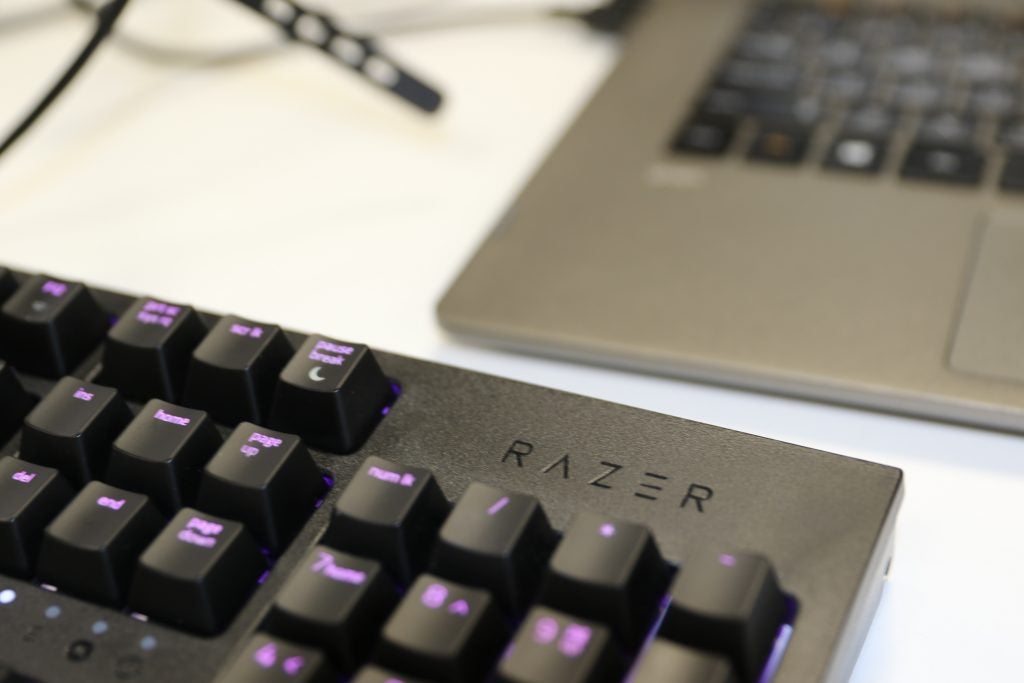 The top-right side of the new Blackwidow, illustrating Razer’s attention to detail

Right off the bat, the backlighting of the 2019 Blackwidow is, as always with Razer, sharp and to-the-point. Lights shine through the keycaps nicely and the LED’s effects are not negated by the solid black exteriors. Unlike the Alienware AW678, you can control the backlighting of every individual key, giving you the freedom to make your Blackwidow look as garish as possible, if that’s what you’re into.

What is an issue however is the Razer Synapse Software. Firstly, it’s a pretty hefty install at 300MB for some software and once you get into the software, it’s a minefield to use. There’s almost too many functions to pick from. While I’m a perfectionist when it comes to controls and settings, I’m not sure if I would have the patience to go through and program all the individual keys.

That being said, what the Blackwidow lacks in dedicated macro keys, it makes up for in programming capability. Allowing for every single key to be tinkered with isn’t as bad as you might think, as you can program individual macros, but these will be on existing keys which may get somewhat confusing if you’re using them on a myriad of different games.

The software also allows for a ‘Hypershift’ function which lets you create more functions on a single key, acting like the Control key does outside of games. The programmable macro element itself seems pretty intuitive by comparison to the rest of the software, and features plenty drop-down menus worth of options so you’re not in the dark with anything you wish to program. It mitigates the lack of macro keys somewhat and some gamers will arguably prefer this option, thanks largely to the freedom you are afforded. 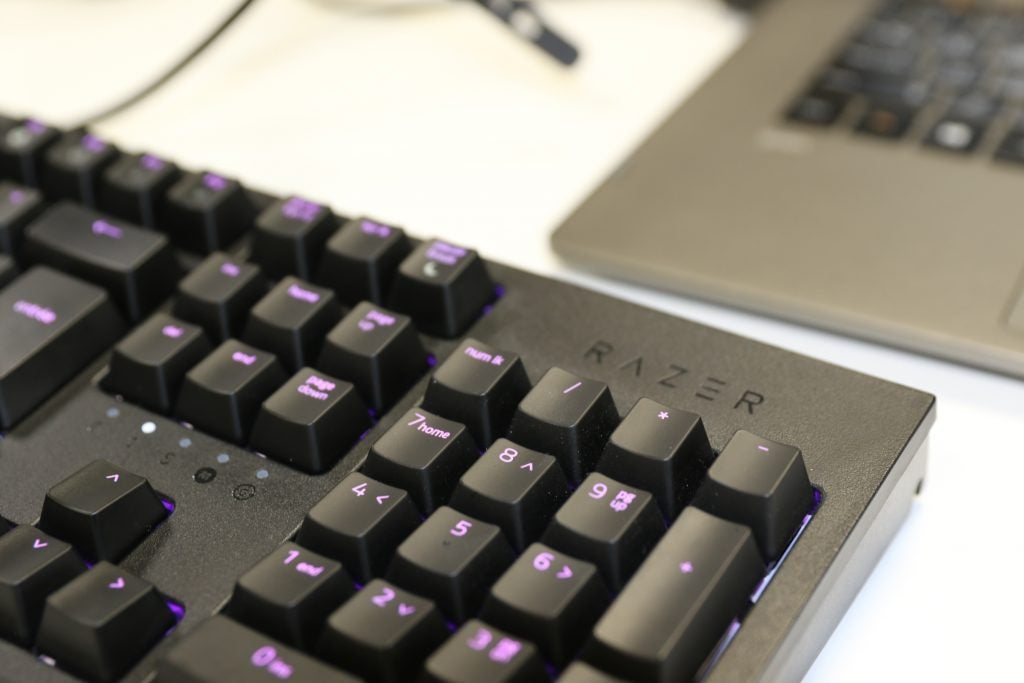 In all honesty, this is a really hard sell. The 2019 revision of the Blackwidow ticks all the right boxes in bringing in some new functions, but it falls pretty short of the competition. It lacks what some would call basic functions such as those programmable macro keys and dedicated multimedia functions.

In this case, the clicky switches, flashy lights and bright colours don’t let Razer escape from this chronic underselling of a fan-favourite.