If you're invested in the Razer ecosystem and want to take your gaming to the next level with a comfortable and super-precise wired mouse, then the Basilisk V2 is a superb option

The Razer Basilisk V2 represents Razer’s latest revision of its popular Basilisk line of mice. Following the highly rated wireless incarnation with the Basilisk Ultimate, it makes sense to offer a wired option with that 20,000 DPI sensor.

Costing £79.99 it isn’t cheap for a wired gaming mouse, but that Focus+ sensor might just be enough to help it power to victory.

Like its wireless siblings and many other mice in this price bracket, the Basilisk V2 is made up of sturdy-feeling plastic that’s nicely offset by a set of patterned grips occupying both sides of the mouse. The Basilisk V2 is insanely comfortable, and its overall construction helps to exude a brilliantly premium feel.

The Basilisk V2 is home to a myriad of programmable buttons, which are all tactile and pleasant to the touch. They range from the normal and expected mouse buttons to two atop the mouse that control its DPI levels, from 800 to a whopping 20,000. There’s also a button on the underside of the unit to switch between five different on-board profiles which are configurable through Razer’s Synapse 3 software.

Again, much like its wireless relatives, this wired iteration features a fantastic ratchet scroll wheel with adjustable resistance to suit most folks’ needs. To some, this might be a novelty, but it’s still great to have the option.

Unfortunately, there aren’t any additional weights or side pods to speak of, but at 92g this is a nicely weighted mouse, and feels decent in-hand. 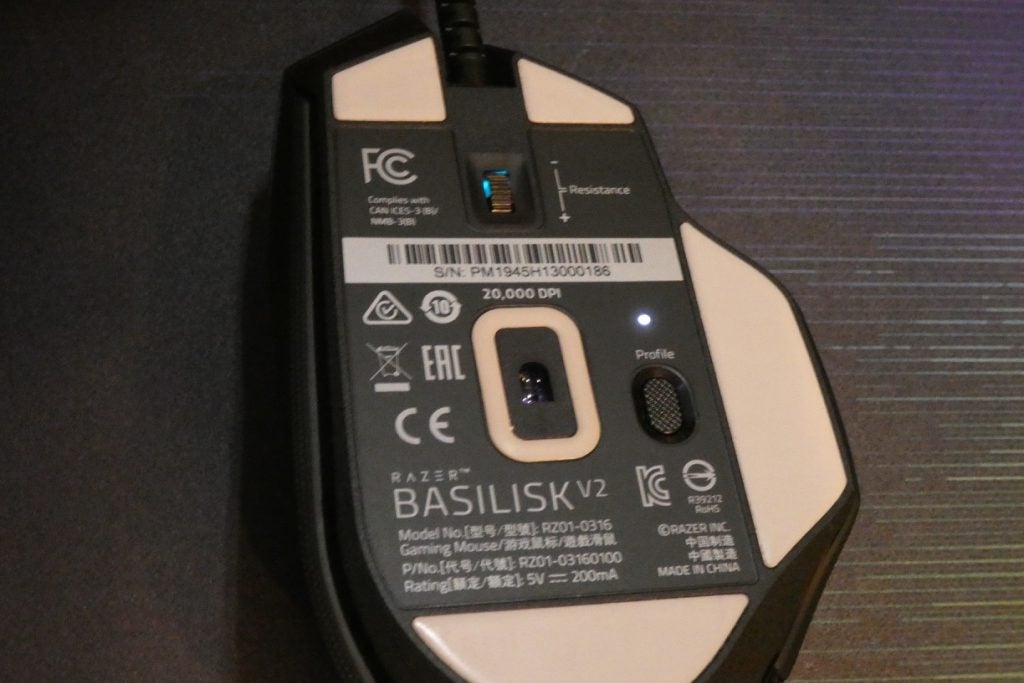 Most notable about the Basilisk V2 is the inclusion of Razer’s Focus+ sensor. It’s unparalleled when it comes to performance, both during gaming and typical day-to-day usage. It’s up there with Logitech’s reputable Hero sensor.

Sure, 20,000 DPI can take some getting used to, but once you’re accustomed you can fine-tune your movements accordingly. In day-to-day use, it’s a brilliant office mouse, especially with the adjustable DPI that can be changed on the fly. The Focus+ sensor also works on any surface, including glass, which gives the Basilisk V2 extra brownie points over some of the competition.

When put through its paces in gaming situations, the Basilisk V2 certainly rose to the challenge. In high-intensity games, including several runs of CS:GO and other shooters, the 20,000 DPI Focus+ sensor was both sharp and precise in swiping across the screen or turning around corners to be greeted by a trigger-happy opponent.

In addition, Razer’s optical switches felt tactile and firm to the touch. These are Razer’s own switches (manufactured by a third-party company on a production line, but exclusive to Razer), offering a unique performance compared to rivals, which often use industry standard alternatives. 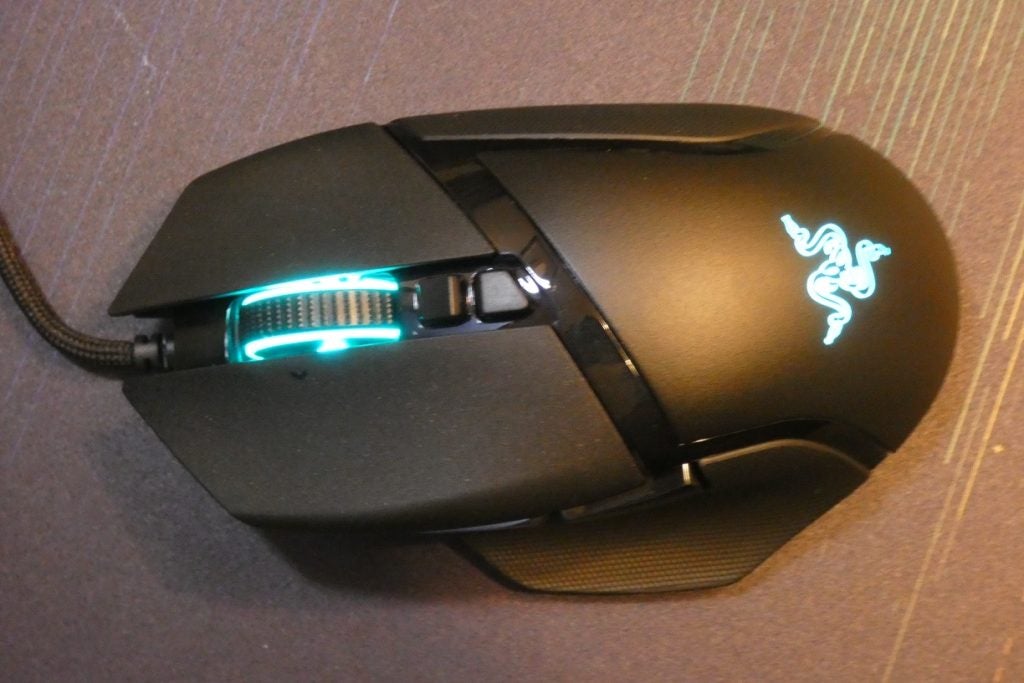 The Basilisk V2, even without software, certainly looks the part. Despite featuring only two lighting zones, Razer’s Chroma lighting engine ensures it’s both sharp and aesthetically pleasing. Razer has done all it can to make the Basilisk V2 a good-looking mouse.

With Synapse supported, it unlocks an otherworldly level of customisation. The 11 mouse buttons are infinitely programmable, with options ranging from system functions to opening applications and programming macros – which also happens to be rather easy. The included Hypershift function adds yet another layer of customisation and effectively doubles the number of programmable buttons to 22.

Razer’s Chroma lighting engine always excels and it’s no different on the Basilisk V2. Even on typical presets such as static colour and blinking, it manages to look crisp. The more unusual options, such as the Chroma Visualiser, look fabulous too, allowing the backlighting to match any audio you happen to have playing. This is particularly useful when listening to certain genres of music; it can be a tad hit and miss, but for something with decent drums or a banging bassline, you’re sorted.

The Chroma system also allows for connection to other devices such as the Phillips Hue home lights, meaning that you can turn your room into an RGB disco. 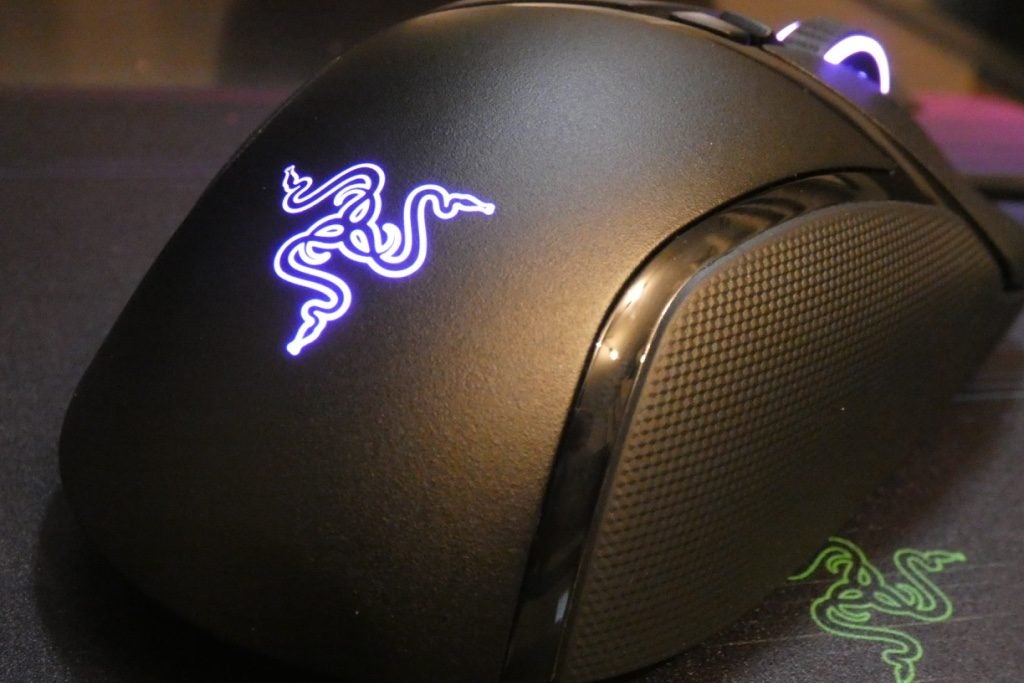 Should you buy the Razer Basilisk V2?

The Basilisk V2 is a worthy unit. If you’re invested in the Razer ecosystem and want to take your gaming to the next level with a comfortable and insanely precise wired gaming mouse, then the Basilisk V2 is perfect.

However, at £79.99 it’s perhaps a little expensive. In this instance, it’s a trade-off between sensitivity and your back pocket. Other mice, such as Logitech’s wired G502 Hero offer a 16,000 DPI sensor for a little less money. In addition, wireless options such as Roccat KAIN 200 AIMO are equally competitive when it comes to price.

That being said, if you love the Razer brand and fancy the looks of the Basilisk V2, you’ll no doubt be very pleased with Razer’s updated wired mouse.

If you’re invested in the Razer ecosystem and want to take your gaming to the next level with a comfortable and super-precise wired mouse, then the Basilisk V2 is a superb option.