Razer's newest wireless mouse packs a punch, delivering a lot of blows to the opposition. With its 20,000 DPI sensor and latency-free connection, it works an absolute charm; I'd recommend it in a heartbeat. However, with such a hefty price, this is only a worthwhile purchase for serious PC gamers

What is the Razer Basilisk Ultimate?

With an RRP of £169.99, the latest addition to Razer’s family of mice is by no means cheap – and being designed to compete with the likes of the Logitech G502 means it has to pack a punch. So, does it deliver? Let’s find out.

Like much of the competition, the Basilisk Ultimate is made predominately of plastic that’s nicely offset by patterned rubber grips occupying both sides of the mouse. Rest assured, it’s comfortable in-hand. There’s a premium feel to the overall construction of the Basilisk Ultimate, although that’s to be expected given the price.

There are a whole host of programmable buttons, 11 to be exact. These range from normal mouse buttons to two that sit atop the mouse to control the DPI level, from 800 to the dizzy heights of 20,000; this is the highest I’ve ever used. It smashes Logitech’s Hero sensor out of the park by a whole 4000. 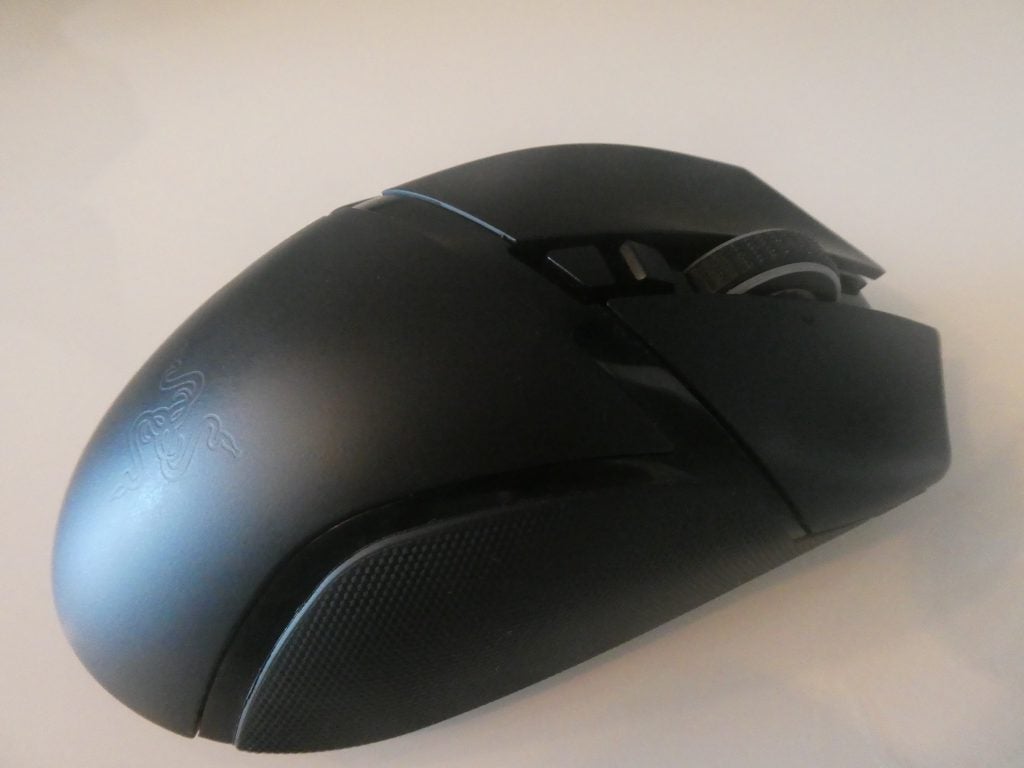 Much like the Basilisk Ultimate’s smaller brother, the Basilisk X Hyperspeed, there’s no additional weights or side panels – which, in my opinion, are a must have in the modern market. Indeed, lower price competitors such as the Logitech G502 and models that are a third of the price such as the Alienware AW959 include these features, so it’s abnormal not to see them here.

The Basilisk Ultimate is also compatible with Razer’s micro-USB powered charging dock, but you’ll need to buy that separately. But considering the micro-USB port contained on the mouse itself, the role of the dock seems somewhat void.

When testing the Basilisk Ultimate, it was ultimately a case of seeing if Razer’s Focus+ sensor and Hyperspeed wireless technology works better than that of its competitors. We’re talking here in comparison to Logitech’s renowned Hero sensor and Lightspeed technology.

For day-to-day use, the sheer sensitivity of 20,000 DPI took some getting used to, although once accustomed to it, you can tune your movements to suit perfectly. You also have the ability to change the resistance of the scroll wheel, thanks to a small roller on the bottom of the mouse, which adds yet another element of customisation.

The Basilisk Ultimate’s sensor works on pretty much any surface including glass, which sets it apart from some of the competition. Indeed, it’s also plug-and-play, ensuring it’s painless to use and comes charged out of the box. Its battery life eclipses Logitech’s offerings, offering to up to 100 hours of gaming, without lighting. 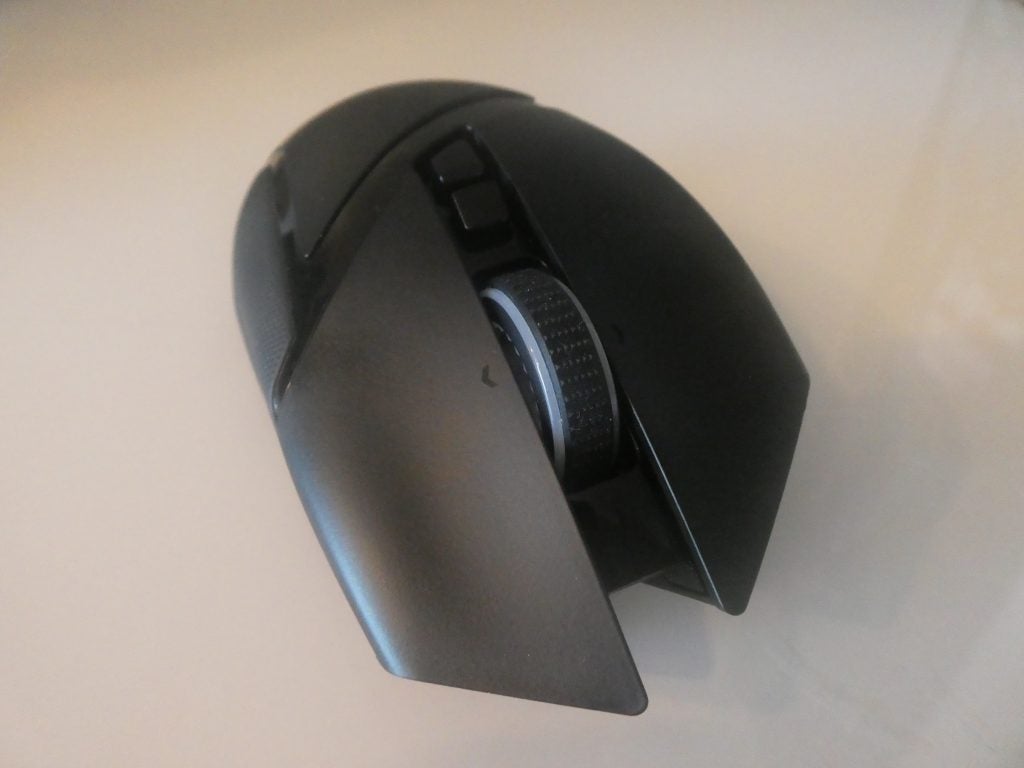 The Basilisk Ultimate doesn’t make use of the typical 2.4GHz channel used by most devices and instead uses a 4GHz channel. This means there’s practically no interference from any other devices, making the connection when gaming utterly seamless.

The 20,000 DPI sensor proved rather fabulous, packing a significant punch when moving round corners and quickly spinning round to kill enemies in CS:GO. In addition, the optical switches under the main mouse buttons were also rather clicky, compared to some mushy ones I’ve used in the past.

It’s certainly a satisfying gaming experience when using the Basilisk Ultimate, and the Hyperspeed connection more than makes up for the lack of wires. In addition, the Focus+ sensor has to be one of the industry’s best.

As is always the case with Razer products, they have the ability to blow you away with lighting and software. I’d go as far to say this combination of Synapse 3 and the Basilisk Ultimate is the best on the market today.

The mouse’s backlighting, even on its own, looks fantastic. Featuring 14 different zones of backlighting makes it more vivid than ever before. Razer’s products certainly have the ability to catch your eye, thanks to crisp and clear lighting, smashing a lot of other competitors out of the water.

Within Synapse, there are 11 programmable buttons allowing you to customise until your heart’s content. From remapping to individual system commands to programming macros, Synapse does it all. Razer’s Hypershift function also unlocks a new layer, which only furthers this mouse’s programmability. 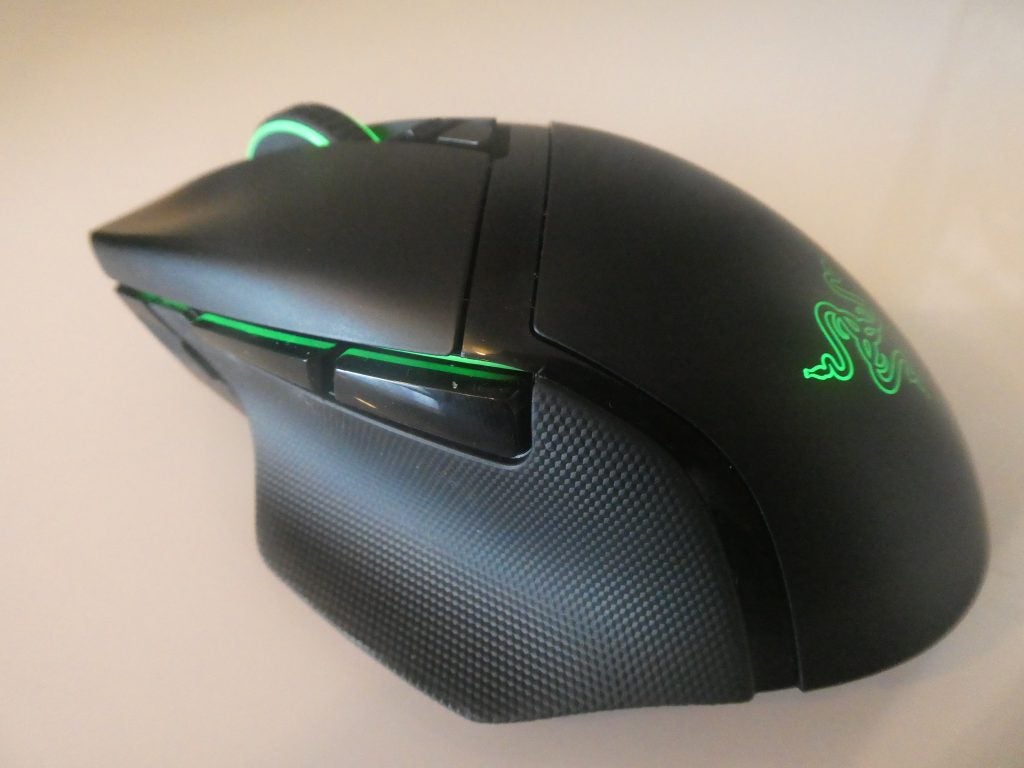 The backlighting options are fabulous, and the Chroma lighting engine is really what sets this mouse apart from the crowd. The typical presets of breathing or scrolling through a rainbow of colour are present, but the Basilisk Ultimate also features an audio visualiser, much like Logitech’s G502, which works rather well. It’s song dependent, but on Ringo Starr’s drum solo on The End from Abbey Road, it picks it up pretty much perfectly. That being said, even having the option for the visualiser is pretty quirky.

The Chroma system allows for connection to other devices such as the Phillips Hue home lights, meaning that you can build your RGB kingdom beyond your office or bedroom. The ability to tie the lighting with a whole host of other devices does seem like a cool idea.

Should I buy the Razer Basilisk Ultimate?

Razer’s newest wireless mouse packs a punch, delivering a lot of blows to the opposition. With its 20,000 DPI sensor and latency-free connection, it works an absolute charm; I’d recommend it in a heartbeat. However, with such a hefty price, this is only a worthwhile purchase for serious PC gamers