What is the Razer Atheris?

The Atheris is the latest small-form-factor wireless mouse from gaming heavyweight Razer. Unlike most of the company’s other mice the Atheris is being marketed for office use as well as PC gaming, and features a staggering 350-hour quoted battery life.

As an office or laptop companion, the Atheris gets a lot right and is a great productivity aid for students, office workers and gamers who are regularly on the move. But ongoing issues with Razer’s software stop it being a knockout success. 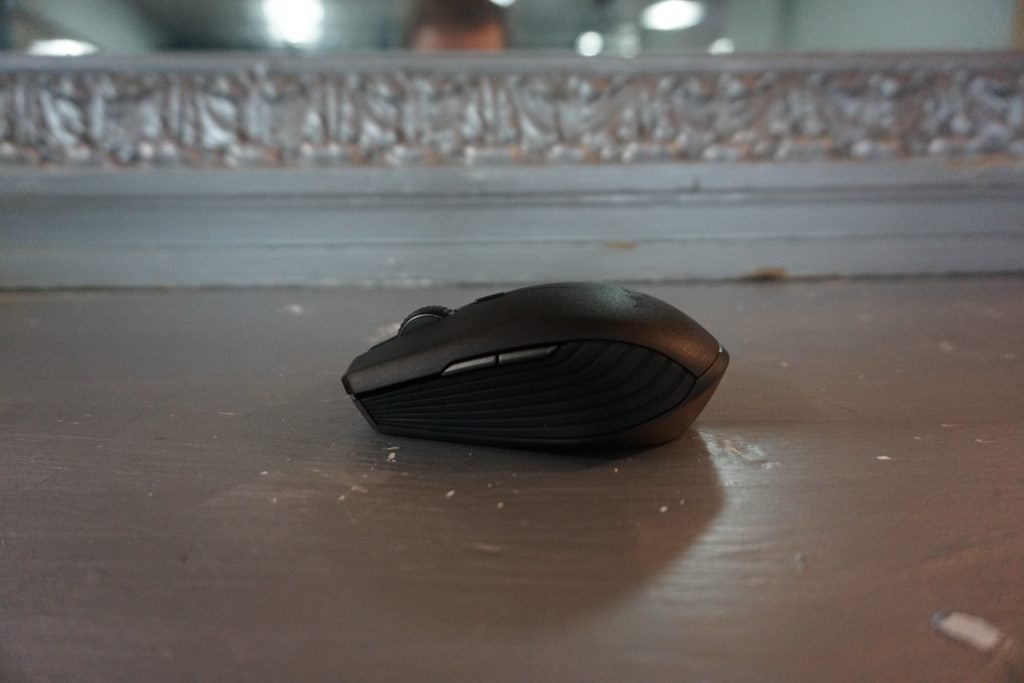 Visually, the Atheris is pretty unassuming. The pebble-like mouse looks like a stripped-down version of the Razer Lancehead, featuring the same smooth top and grooved rubber sides. The big difference is that the Atheris doesn’t have any lighting and monochrome black colouring.

Measuring in at around 3.9 x 2.5 x 1.3 inches, the Atheris is about as compact as a gaming mouse gets – which is a blessing and a curse, depending on how big your hands are. I was fine using the mouse for quick CoD matches and sporadic gaming sessions on the go, but our larger mitted news writer found it a little too small to comfortably hold for long sessions.

The more significant issues for me are that it has only left side buttons, and with the batteries plugged in it weighs around 113g, which is way heavier than I’d like when gaming.

Aside from the above issues, this mouse ticks all the right boxes design-wise. The wheel feels solidly built and has a pleasing click action. The 2.4GHz USB dongle can neatly be docked under the top case when traveling, which, coupled with the Atheris’ pocket-sized dimensions, makes it a great travel companion.

The Atheris is great for lightweight gaming and office use, too. Unlike many gaming mice, the Atheris is blissfully free of RGB lighting and over-the-top design features. The only light is a single blue LED in the central button that lets you know when it’s on. On the underside you’ll find a three-way switch that lets you turn it off or pick between a 2.4GHz dongle connection or basic Bluetooth – which will be useful if, like me, you regularly forget to take the connector with you. 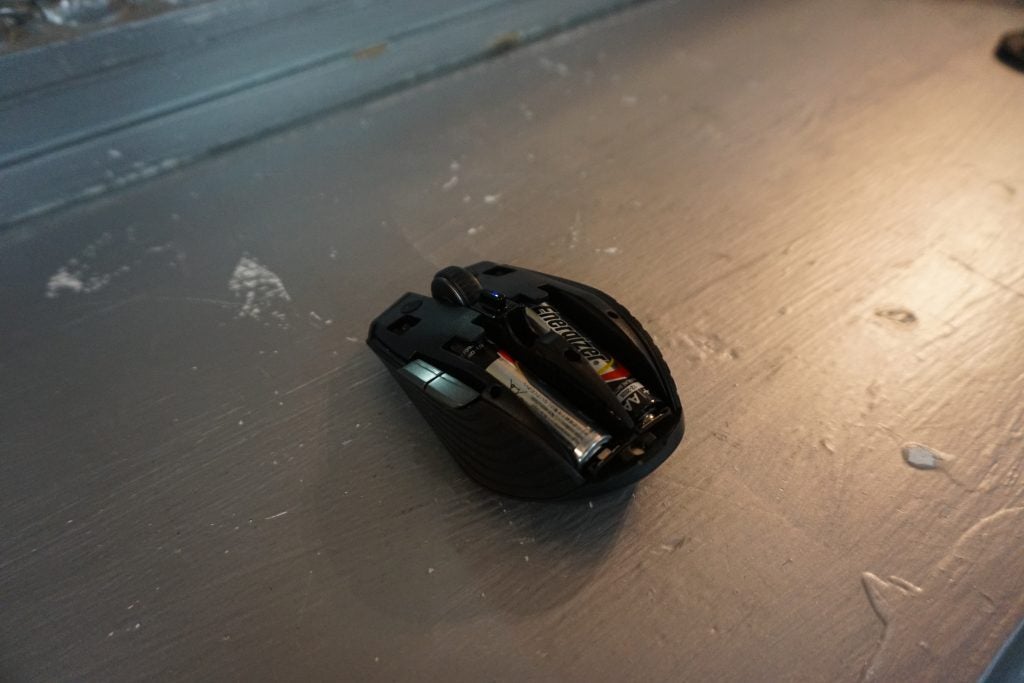 The 7200 DPI optical sensor is more than sensitive enough for gaming and office work and, although I had some issues using it in busy signal areas in Bluetooth LE mode, it works a treat when gaming on the go. Coupled with the 1000Hz “Ultrapolling” – polling – rate, I never felt like a death in CoD or PUBG was down to my hardware using the Atheris. It did take me a couple of games to get used to the increased drag that results from its increased weight, however.

The only serious experienced stemmed from the shortage of multi-function keys and slightly difficult to navigate Synapse 3 software. You can adjust the DPI manually using the middle button under the control wheel, but If you want to setup custom game profiles or manually programme key inputs, you’ll have to download Razer’s Synapse software.

When you plug the mouse in it prompts you to download Razer Synapse 3 software. On paper, this should let you get round the lack of customisable keys. The software includes all the features you’d expect from a gaming suite, including the ability to make custom profiles, map macros and take advantage of Razer’s “Hyperesponse” buttons function. 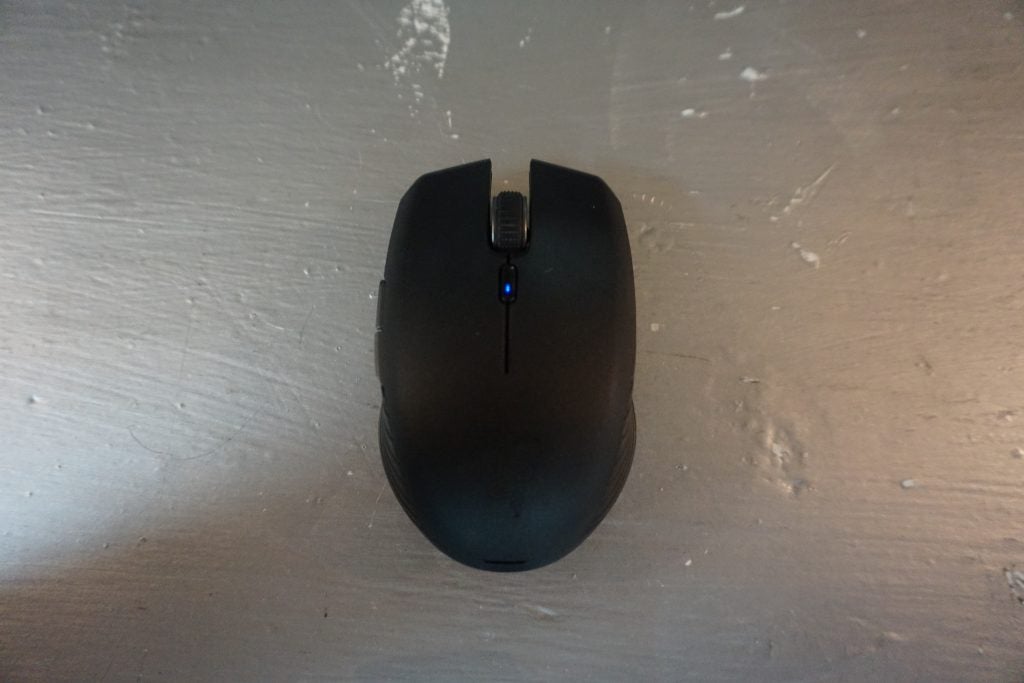 If you can get your head around the UI then the basic functions work well enough, although in my experience Synapse 3 is significantly more fiddly to use than competing packages, such as the Corsair Utility Engine 2.

This remains the case with the Atheris. Throughout the entire review I couldn’t find a way to lock profiles to games, something I could easily do on Synapse 2. I also couldn’t find key games-focused settings, such as the ability to control acceleration.

It’s a similar story with macro key editing; it’s easy enough to map the keys as you see fit on a surface level, but advanced functionality such as the ability to chain them is missing. These sound small, but they’re key features that all competitive gamers will be on the lookout for.

The Hyperesponse buttons feature is also fairly superfluous given the lack of extra keys. It lets you set one of the keys as the custom “Hyperesponse” button and then map secondary functions to the other keys.

In theory, this means you can get two functions of each of the Atheris’ buttons: one without the Hyperesponse pressed and one with. The issue is that only two of the keys are fully mappable after you dedicate one to being the Hyperesponse control – the left- and right-click buttons native functions are locked, so you can only map their secondary function.

This makes getting full use out of the system a little tricky, especially when you can’t set up game-specific profiles. After a week, I found myself turning the feature off. 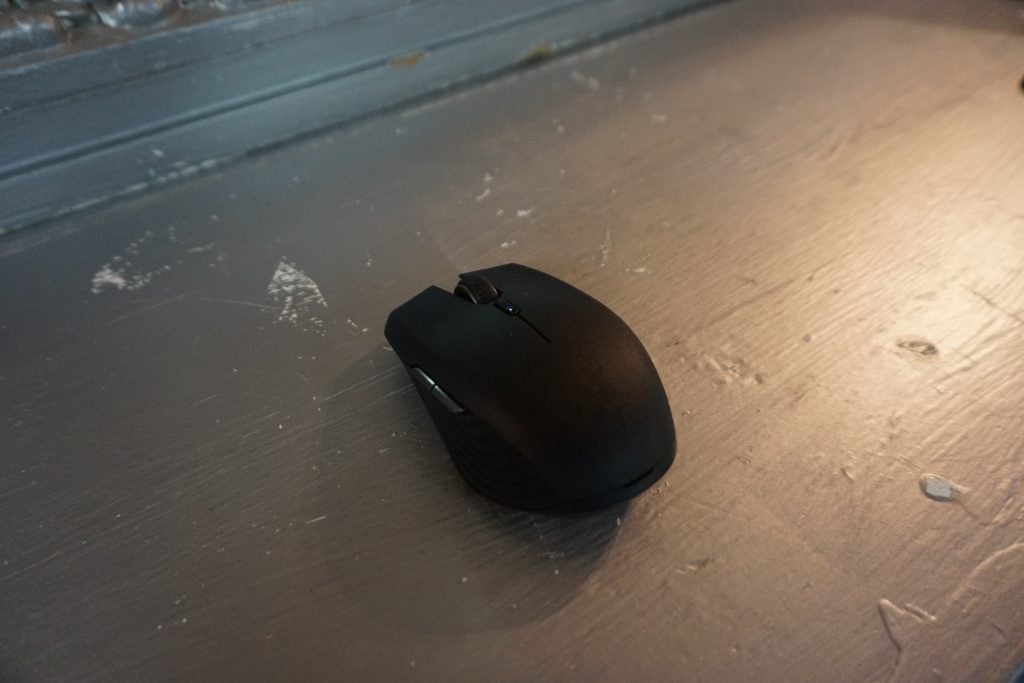 Why buy the Razer Atheris?

If you’re after a small-form-factor, satchel-friendly wireless mouse that can be used for work and play then there are worse options than the Razer Atheris. The mouse is a little on the heavy side, but it makes up for this with a stellar battery life, great response times and a wonderfully unassuming design.

The only downside is that its Synapse 3 software isn’t as developed as that of competitors and it’s missing a few advanced features hardcore gamers will want.

The Razer Atheris is a compact wireless mouse with amazing battery life but poor software.