The Christmas/New Year holiday is the time of year when you feel glad to have a Wii. With mates and relatives around there’s suddenly a good reason to get Nintendo’s little box hooked up again, replace the batteries in the remotes, and have a little fun. But what do you do if you’re tired of Wii Sports, bored with Wii Play and not keen on the sound of Wii Music? Is there another game out there that might keep you and your guests entertained? 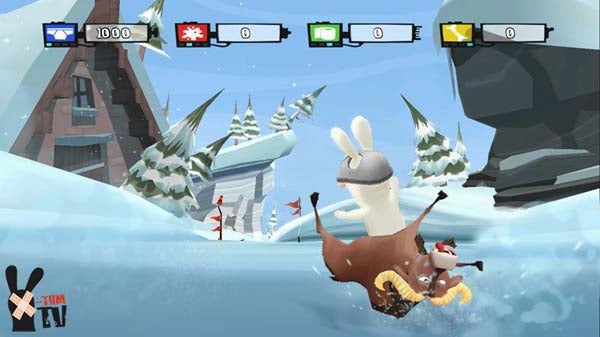 Well, if there’s anything the Wii has no shortage of, it’s party games. Unfortunately, the vast majority just aren’t any good, being personality-free mini-game collections which play like the video-gaming equivalent of a tin of cheap Christmas chocolates: for every tasty morcel there’s another that gums up your teeth or makes you grimace with mild disgust. Rayman Raving Rabbids TV Party, however, has a lot more to recommend it than most entries in the genre. First, it’s a follow-up to one of the original Wii party games, and so has a certain amount of pedigree. Secondly, it’s actually playable as a single-player game, meaning you won’t necessarily put it away as soon as January 1st rolls around. Thirdly, it has its own distinctive style and quirky character. Fourth – and this is going to be one of its biggest selling points for a lot of Wii owners – it’s one of the few games out there that makes use of the Wii Fit Balance Board (you know, that thing that’s been under your bed since the middle of May). 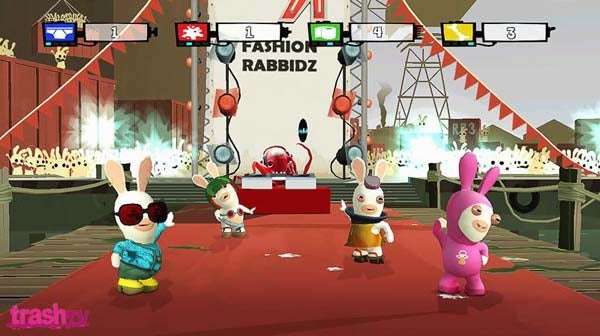 Forget what semblance there is of a plotline; all you need to know is that the Rabbids have now taken over TV, and that the single-player mode is all about working your way through a week of Rabbid-related TV madness, choosing a different channel – and so a different mini-game – for each of the timeslots in a day. Fill up enough of the timeslots and you unlock a new day, and so a new set of programmes and mini-games. Really, that’s all there is to it. 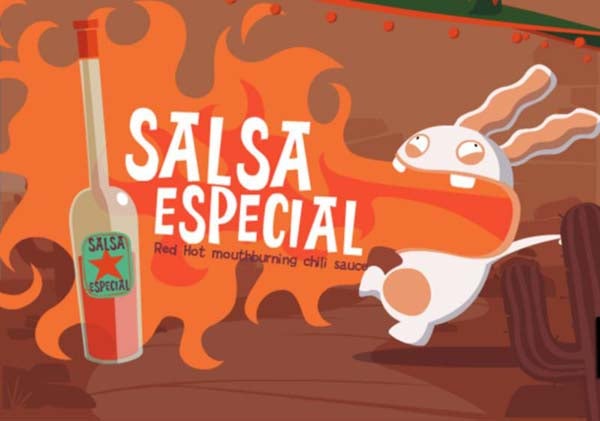 But then, what more do you need? As long as the mini-games come thick and fast and provide enough entertainment, that’s really all you ask for from a game in this genre. Well, as with any party game, the mini-games are a bit of a mixed bunch, but generally the strike rate is much higher than your average compilation. We get a few duffers, with a series of mini-games reliant on rapidly drawing lines and symbols on the screen being particularly irritating, but also a few crackers. The shooting gallery games have always been highpoints of the series, and the ones included here are probably the best the Raving Rabbids have thrown up. New dancing and rhythm action games also work well, the latter involving some hectic waving of remote and nunchuk to simulate the moves being shown onscreen, and being probably as much fun to watch as humiliating to play.

There’s some reasonably and familiar music, and if the versions aren’t original, they’re at least performed with a certain Raving Rabbid energy. A couple of the racing games are mediocre, but a downhill slalom on an upturned yak – beastie boarding, as the rabbids call it – is an entertaining skit on the SSX-style stunt racer. The game even has the sense to vary the pace a little, with less action-oriented games like Pimp My Rabbid, where you choose a costume to fulfil a set of odd requirements, offering a change from the frantic norm. 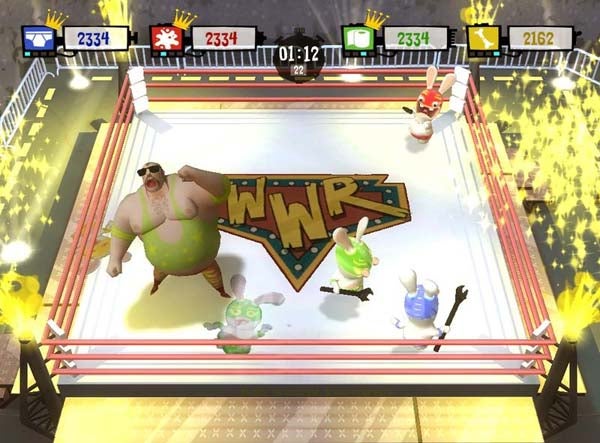 Ubisoft has also sorted out one of my biggest complaints about the first Raving Rabbids game by providing clear, step-by-step instructions on what you’re meant to be doing with the Wii remote and nunchuck. A few of the mini-games still suffer from over-complicated or over/under-sensitive controls, but in most cases they’re easy to pick up and play and the difficulty level is just about right for the average, not particularly athletic Wii owner. Ageing relatives might have to remove a jumper after the dancing competition, but they’re probably not going to have a coronary halfway through it. You couldn’t say the same about some of the athletic events in the original RRR, which had your relatively fit correspondent collapsing on the sofa. 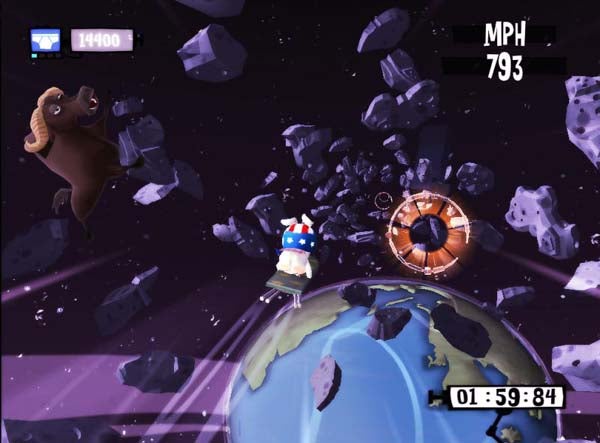 And the series style and sense of humour remains a major selling point. Sure, those crazy rabbids aren’t quite as hilarious or anarchic as Ubisoft seems to think, but the game does a nice line in TV satire and slightly violent slapstick humour. I love the way the shooting gallery games are now cult movies being invaded by dozy rabbids in inappropriate costumes, giving the game license to dish out winking homages to zombie movies, fifties sci-fi and gangster epics. Meanwhile, who can resist a game that pulls Wii Fit and Chuck Norris together in one, exceptionally silly mini-game gag. Played on your tod it’s unlikely that you’ll find the Rabbids’ antics side-splitting, but they’re certainly a lot more amusing than the usual anodyne nonsense you’ll find in most cute mini-game collections.

Unfortunately, what I thought would be the game’s biggest draw turns out to be a bit of a turn-off. The Balance Board gets a fair bit of use in game, putting in an appearance in the dance games and a couple of the racing-style games, with the best bits being a sort of outer-space skateboarding sequence and the chance to steer your beastie board by sitting down and shifting weight around on your bum. However, the implementation isn’t always perfect, with the balance board controls working erratically or the device proving either too sensitive or not sensitive enough to do the job. Once the novelty factor of using the balance board wears off, it’s tempting to switch back to using the regular remote/nunchuk combination. You’ll have an easier time and higher scores. 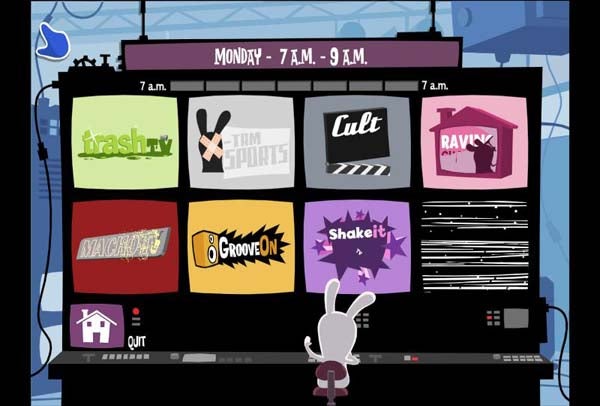 Luckily, if the Balance Board is a damp squib the game is anything but as a social game. Up to eight players can compete using up to four controllers, and while some games have to be played solo, turn-by-turn, a fair number, including the dancing and the shooting, are ideal for simultaneous play. Rounds of mini-games are punctuated by little extra games to select who gets to pick the next ‘channel’ and with multiple players dancing or playing in a pretend bag, there’s plenty of opportunity to point and laugh at your nearest and dearest. On top of this, the game does its best to encourage ruthless streaks. At specific moments in certain solo events a quick flick of a named, inactive remote kicks in some dastardly act of sabotage, throwing up clods of snow in the beastie-boarding, for example. It doesn’t have to be the season of goodwill all holiday, does it? 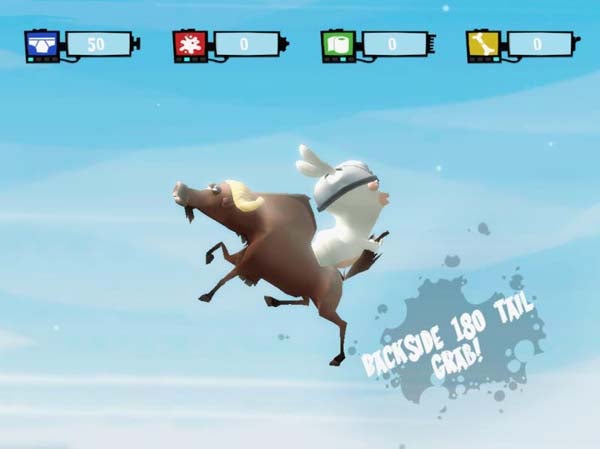 In the end, this is one of those games where your mileage will vary. With a good, mixed-age crowd who like the madcap antics of those Rabbids, RRRTVP is a lot of fun. On your own or with a more cynical bunch it can fall flat, and if you’re already tired of mini-game compilations, this one isn’t quite so fantastic that it’s going to change your mind. If you bought a Wii last Christmas, however, and you’re looking for something new to do with it this holiday, then RRRTVP is a much safer bet than most of the competition that has flooded the shelves in the last two months.


Not the perfect or most inspired party game, but one with a lot of entertainment value, particularly with a mixed age, family crowd.