Most sensible people would agree that PlayStation Vita has one of the strongest launch line-ups we’ve seen from a console in some time. Whereas the 3DS had to soldier along with makeweights like PilotWings Resort and Ridge Racer 3D, with only Streetfighter IV 3D to show what the handheld could do, Vita has titles of the quality of Uncharted: Golden Abyss, Wipeout 2048 and Ultimate Marvel vs Capcom 3 on day one. However, one of the other great treats of the launch line-up might be a little more unexpected. 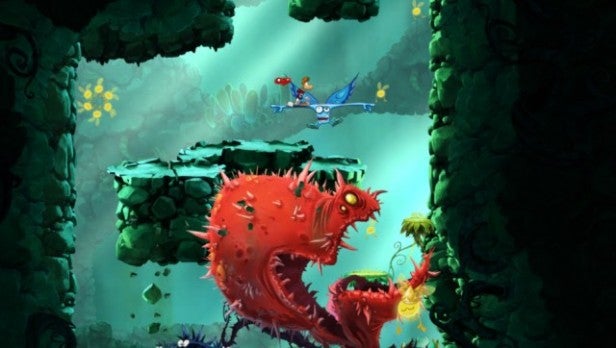 It’s a Vita conversion of Rayman: Origins, last year’s beautiful retro reboot of the classic platformer, and it’s arrived on Vita with its gorgeous hand-drawn HD visuals wonderfully intact. We won’t repeat outselves unnecessarily by covering the exact same ground as our 9/10 review, but it’s arguably the most stunning-looking 2D platformer ever made, and one of the most inventive, matching the likes of Super Mario World and New Super Mario Bros Wii when it comes to throwing in crazy concepts at a frantic rate.

Rayman Origins also has its own distinctive cartoon style, an infectious, exuberantly silly brand of humour, and one of the best soundtracks in modern gaming. Other games hit you with a sweeping score and some spot effects then think the job is done, but Rayman Origins layers its effects and background music with short, dizzy tunes that just make the game more fun. You’re not just interacting with the visual landscape, but also with the soundscape too. In this way, as in so many other ways, Rayman has never seemed more like Mario’s cheeky and very Gallic cousin. 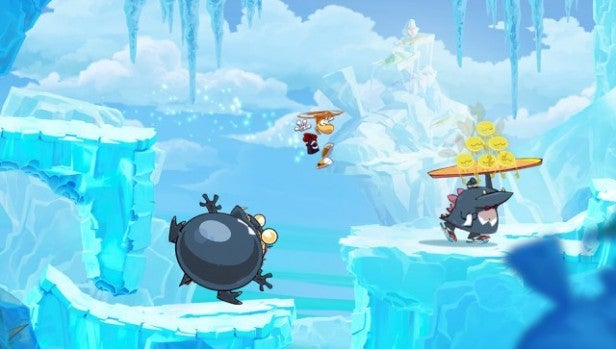 All of this stuff holds true of the PlayStation Vita version. Visuals designed to be showcased in glorious 1080p look just as sharp and vibrant on Vita’s fantastic 960×544 OLED screen, and the smooth animation and slick, multi-layered backgrounds appear to have made the transition without a detail fudged or missed. The game never seems to stutter, even when the game is putting its biggest enemies on the screen, and the worst thing you can say is that, at times, the smaller screen size prevents you from seeing the visuals in all their glory, or occasionally make sense of what’s going on. Luckily, there is an answer. By making the familiar pinch-to-zoom gestures we all now know from our smartphones, you can make the view zoom in and out. To be honest, though, we found we were too busy getting stuck in to remember that this worked.

Rayman Origins demands a lot of your platforming skills, and so a lot of the controls. If we were being really, really picky we might say that the left analogue stick isn’t quite as precise here as it is in the PS3 version, but there’s not much in it, and within a short period of starting play we’d ceased to notice. While Rayman Origins has its share of nasty difficulty spikes, we can’t honestly blame the controls for our failure to zip through these on the first try.

Vita-specific features are relatively thin on the ground. Bar the pinch-to-zoom gesture, the main one in the single-player campaign is some extra collectible items – relics – which you have to tap when you see them on the screen. All we can say is, good-luck remembering to do so when you’re in the midst of all that bonkers platforming mayhem.

Rather, the Vita version is more notable for what it doesn’t have: a multiplayer mode. The PS3 version had an entertaining drop-in, drop-out co-op option, albeit one that never felt as essential as the co-op mode in Trine 2 or New Super Mario Bros. Wii. Rayman Origins on Vita doesn’t support this, either over a local WiFi connection or online, which is a shame. In recompense, there are options to replay levels in a ghost mode, and you can swap ghosts (and relics) with other players over WiFi, then see who can get the best time. 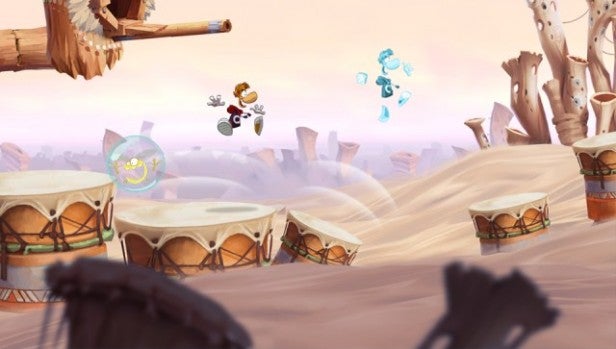 The lack of multiplayer is a slight disappointment, but not one that should put you off Rayman Origins on Vita for a minute. If you have a home console and simply want to play the game, then the 360 and PS3 versions are now widely available for under £20, so might be a more tempting bet. Yet there’s something about the fast-paced, short-lived levels of Rayman Origins that make it a natural fit for handheld play, and the action is just as compulsive and addictive as it was on the home consoles, if not more so. In fact, one of the best things about replaying Rayman Origins on Vita is that it hammers home what an artful, beautifully constructed platformer it is, making it all the more tragic that more people haven’t managed to pick it up. This new Vita version marks a chance to put this situation straight.

Verdict
A fabulous conversion of one of the finest 2D platformers ever made, with beautiful HD cartoon graphics, bags of energy and an excess of ideas. If you missed Rayman Origins on its first pre-Christmas run this is an opportunity to make good on your mistake, and if you buy it on Vita then you’re buying one of the best launch games on the system.