There are times when the world of games feels like a dark
and gloomy place; a world where everything has to be dark, gritty, grey and
realistic, where even fantasy and sci-fi have to come with real-world messages
about the brutality of man to man (or elf) or the corruption of those in power.
There’s some brilliant, thrilling stuff out there, but doesn’t it sometimes all
get you down? Don’t you remember a time of blue skies, cartoon heroes and the
simple pleasures of jumping on your foes, not taking headshots through a set of
iron sights? 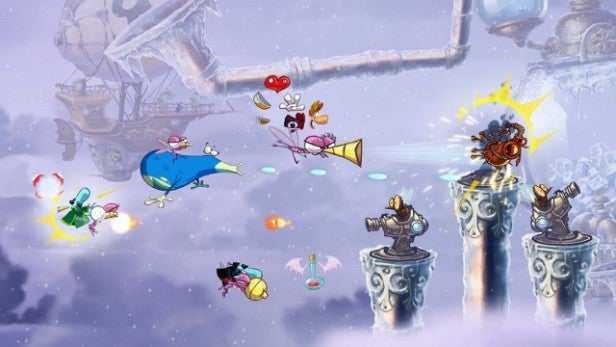 Of course, Nintendo hasn’t forgotten how to do this stuff,
and there are times when Sega threatens to return to its past glories. Rayman
Origins, however, is a dream game for those of us who remember the good old
days. After years where the character has been lying in the doldrums, he’s been
resurrected by his original creator, Michel Ancel. The result is pure
platforming joy on a shiny silver disc. 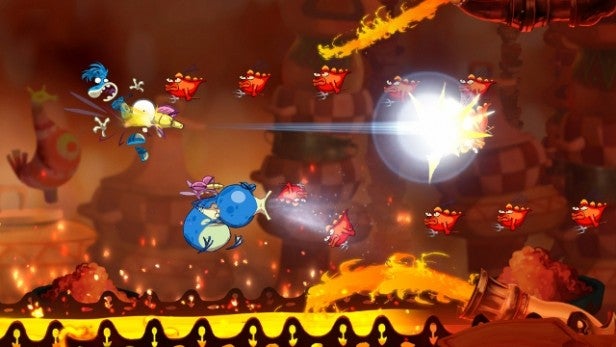 In time-honoured platforming fashion, there is a story of
some sort, but a story so thin that we’re not sure we could reconstruct it if
we tried. All you need to know is that Rayman has a series of worlds to get
through, each comprising of multiple levels, and each level comprising of
several areas that involve running, jumping, sliding and occasionally swimming
from left to right. Rayman starts off with a basic jump and bounce attack, but
as each level goes on he rescues a rather saucy nymph, who then confers on our
limbless hero (he has a head, hands and feet, but no arms, neck or legs) extra
powers. Before you know it he’s punching, ground-pounding, gliding, shrinking,
diving and running up walls like a super-charged Sonic. 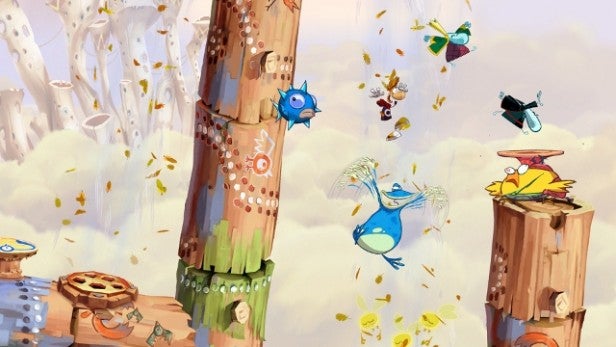 All very business as usual, you might think, and hardly the
sort of thing grown adults should get excited about. Haven’t we got terrorists
to shoot in the face? Nor will it necessarily impress you when we mention that
the levels run the full gamut of platform game clichés. Here’s the jungle, here’s
the desert, here’s the ice world, the fiery bit and a spot of swimming. Isn’t
this all a bit 1992? 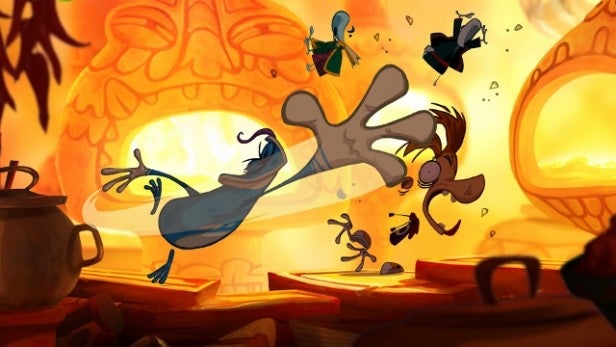 Well, yes, but in a good way – and Rayman Origins has four
major factors in its favour. Firstly, the graphics. Imagine travelling back in
time to play Sonic the Hedgehog, then imagine imagining what Sonic the Hedgehog
might look like in nearly 20 years time on hardware four to five generations on.  Rayman looks like that, but even better, not
just because its running in glorious HD (and 1080p if you have a PS3), but
because the whole look and feel is infused with Ancel’s peculiarly gallic brand
of cartoon lunacy. Rayman Origins is beautiful to look at, packed with stunning
animation, and full of exuberant detail. If it’s not the best-looking 2D game
ever made, it’s very, very close.

Secondly, the sound. While you can’t really compare Rayman
Origins to the likes of Lumines or Child of Eden, there’s something wonderful
going on in the synchronicity between the visuals, the gameplay and the sound.
As Rayman hoovers up the floating lums – his equivalent of Sonic’s rings or
Mario’s coins – there’s always a tinkle that seems to integrate perfectly with
whatever nutty music is playing. Grab one of the special ‘king’ lums and a
manic little tune plays, encouraging you to grab high-value lums in the limited
time that they’re available. The use of musical platforms and switches in later
levels only adds to the impression. We mean it as a complement when we say that
Rayman Origins sounds just as bizarre as it looks. 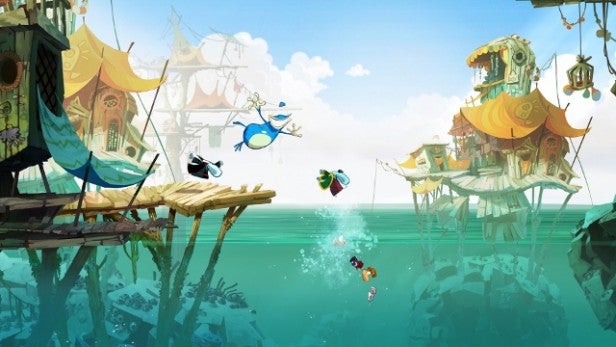 Thirdly, the level design. Sure, Rayman Origins relies
heavily on platform fundamentals, and if you traced every idea back you could
probably find it somewhere in Mario, Sonic, Donkey Kong Country or Oddworld.
Yet it’s a game where new platform types, new enemies, new ideas and new
surfaces are hurled in with reckless abandon at a rate that makes even Super
Mario 3D Land look slightly tame by comparison. There are superb swimming bits
where sinister claws can only be held at bay by hanging around illuminated deep-sea
fish, shooty bits that hark back to the days of R-Type and Gradius, and even
platform staples like the disappearing platform or the falling block are given
a new twist by the anarchic cartoon presentation. The desert world includes the
finest application of the didgeridoo in gaming history. On one level Rayman
Origins is like every other great platformer you’ve ever played, yet on another
level you’ve never played anything like this. 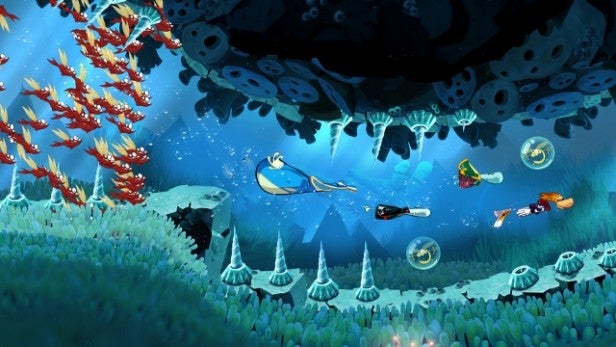 Fourthly and finally, the multiplayer. We won’t pretend that
Rayman Origin’s single-screen, co-op multiplayer is as smart or as engineered
for co-op play as Trine or New Super Mario Bros Wii, but as you bounce along
with a friend (or three), each in a different unlockable costume, the game has
a thoroughly Gallic joie de vivre. Killed friends can be saved if you can reach
their floating bubble, and the co-op can make some of the tougher levels a
little less heavy going (though not by much). Like New Super Mario Bros Wii, it’s
a game you want to play with kids – If only so you can bore them to death with
tales of how gaming was back in the day. 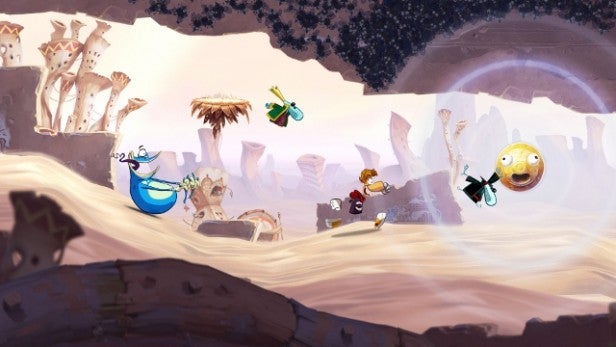 Rayman Origins has its faults. Sometimes you can see that
there’s been such an emphasis on style that key game mechanics go practically
unexplained – a mistake you’ll never catch Nintendo making. There are also a
few painful difficulty spikes, though nothing too unfair or punitively tricky.
It’s not quite as epic as some of the Mario titles, but it is a game born of
love for a character and love for a genre. It’s the kind of game that
leaves you feeling good.

Rather unexpectedly and against stiff competition, Rayman Origins is the best platformer
of the year. With its bright colours, HD cartoon graphics and jubilant
silliness it won’t be for everyone, but it’s a great game for families,
nostalgia addicts, and anyone who has ever loved the simple joys of running
and jumping left to right.