Rayman Legends is one of the finest 2D platformers of recent years, and arguably the limbless mascot’s best outing to date. When it first launched in 2013 I was blown away by its stunning level design, whimsical music and truly creative imagination. Nearly every level was an unexpected joy that challenged and charmed in equal measure. Now it’s on Nintendo Switch in what is arguably the best version to date.

Legends is a beautiful game, with every frame reminiscent of a lovingly crafted painting I’m free to explore in search of kidnapped Teensies and smugly-smiling Lums. Variety is also in plentiful supply, with Rayman stumbling across worlds made of cake, cooking utensils and even didgeridoos. There’s great creativity on display from Ubisoft, and this transfers over to its fiendishly challenging gameplay.

At its core, Rayman Legends is incredibly easy to pick up and play, with co-operative gameplay gaining a new lease of life thanks to Switch’s seamless multiplayer capabilities. Rayman can run, jump, punch and fly across almost any environment. Bounding across platforms and launching my fists into enemies felt graceful, but always required a keen sense of precision or it’s back to the previous checkpoint.

Legend’s difficulty strikes a perfect balance, only ever frustrating during the hardest of boss battles. You can thankfully alleviate its more challenging sections by bringing in a friend. I found playing with a pal on Switch to be an absolute joy, and relatively seamless with the use of two joy-con controllers. Supporting up to four players, some levels can descend into absolute chaos with a few buddies in tow. 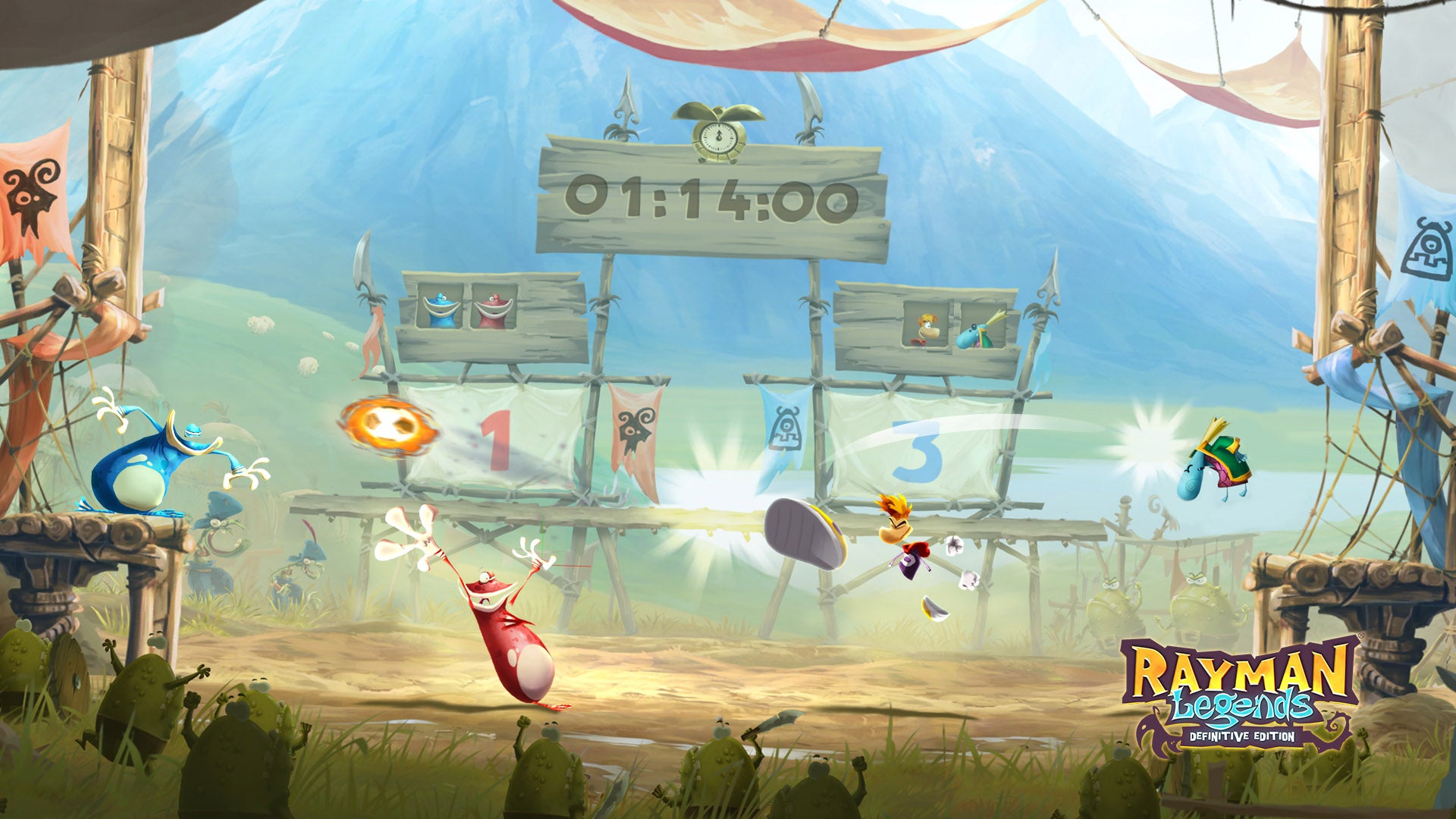 Featuring an array of different worlds, all of Rayman Legend’s levels can be accessed via a central hub that also houses plenty of additional multiplayer modes. Envisioned as a charming little art gallery, there are plenty of secrets to be discovered before descending into the meat of Rayman Legends. Every step feels instilled with a feeling of satisfaction, keeping the sense of fun intact no matter what you’re doing.

In terms of moment-to-moment action, this is the exact same game I played back in 2013. That’s no bad thing, as Legends has already proven itself as a truly special platformer. Despite this, I would have enjoyed a few additional worlds or levels to dig my teeth into on Switch. Perhaps we could have seen a selection of levels based on famous Nintendo characters with unlockable costumes to boot? It’s no deal-breaker, but a small omission I would have loved to see addressed. It would certainly make a potential second purchase on Switch more appealing.

Fortunately, Legends is still positively stuffed with content. In addition to its own set of individual worlds, you’ve also got plenty of remastered efforts from Rayman Origins. The predecessor’s finest moments have been revamped and remixed for Legends with all new unlockables and hidden secrets. The fact each stage holds up effortlessly is a testament to Ubisoft’s fantastic talent, and simultaneously acts as a solid contender to Mario’s platforming crown. This is some of the best 2D platforming on any system, and puts Rayman’s beloved yet flawed 3D adventures to comparative shame.

Origin levels are unlocked through Lucky Tickets, which can be scratched to unlock Lums, Teensies, bonus levels and creatures. Scratched using the analogue sticks or touchscreen, these optional lottery tickets are a proper treat to delve into. As with most of Rayman Legends, it’s all about being fun and rewarding the player for all actions, regardless of how miniscule they might appear. 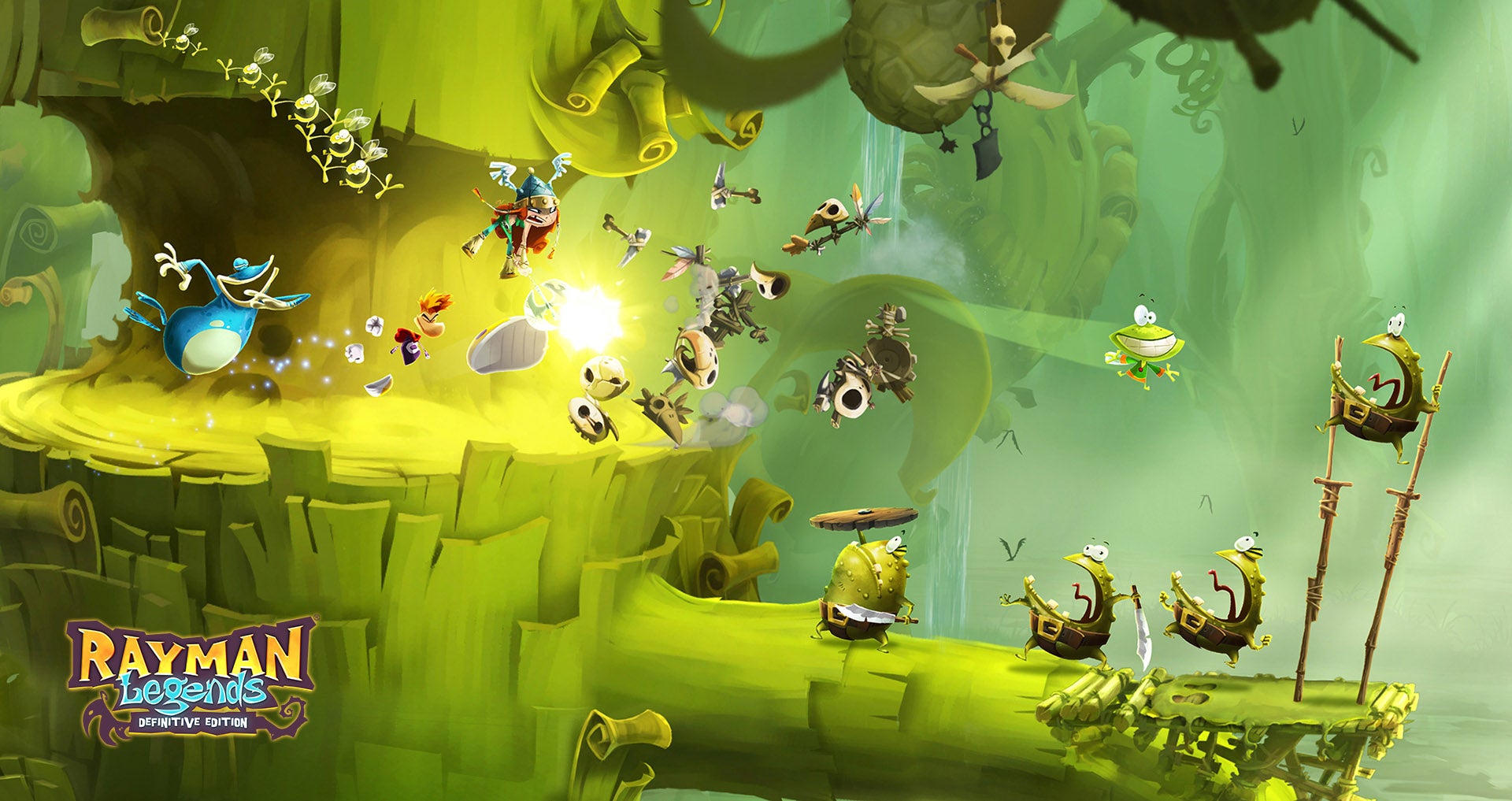 While I spent plenty of time jumping around and punching fools as Rayman, Legends ensures that things never become stale with a surprising amount of variety in its mechanics. Certain levels have Murfy alongside you, who is able to perform context-specific actions across the environment. Whether it be cutting ropes, tickling enemies or gorging on cake, the little green creature’s inclusion is always a delight.

Speaking of Murfy, the “Murfy’s Touch” levels return, previously only utilised on Wii U, in spectacular style. Playable only in portable mode, they had me swapping between traditional platforming and touch-screen controls for a number of cool actions.

Contained in their own individual gallery with new unlockables, it feels far more substantial than replaying old stages for the novelty of touch controls. It’s fun, intuitive and another reason to play on the move. It’s nothing we haven’t seen before, but having these existing goodies packaged in really does make it feel like the definitive experience.

Another spectacular highlight of Rayman Legends are the musical levels that come at the end of each world. Every leap and attack is done in time with the music, with a cascading orchestra growing and bursting as I made my way through the stage, which itself is often falling apart in chaotic wonder around me. This is Rayman Legends at its best, when its platforming prowess and oodles of personable charm combine to create something genuinely memorable. Proper lovely stuff. 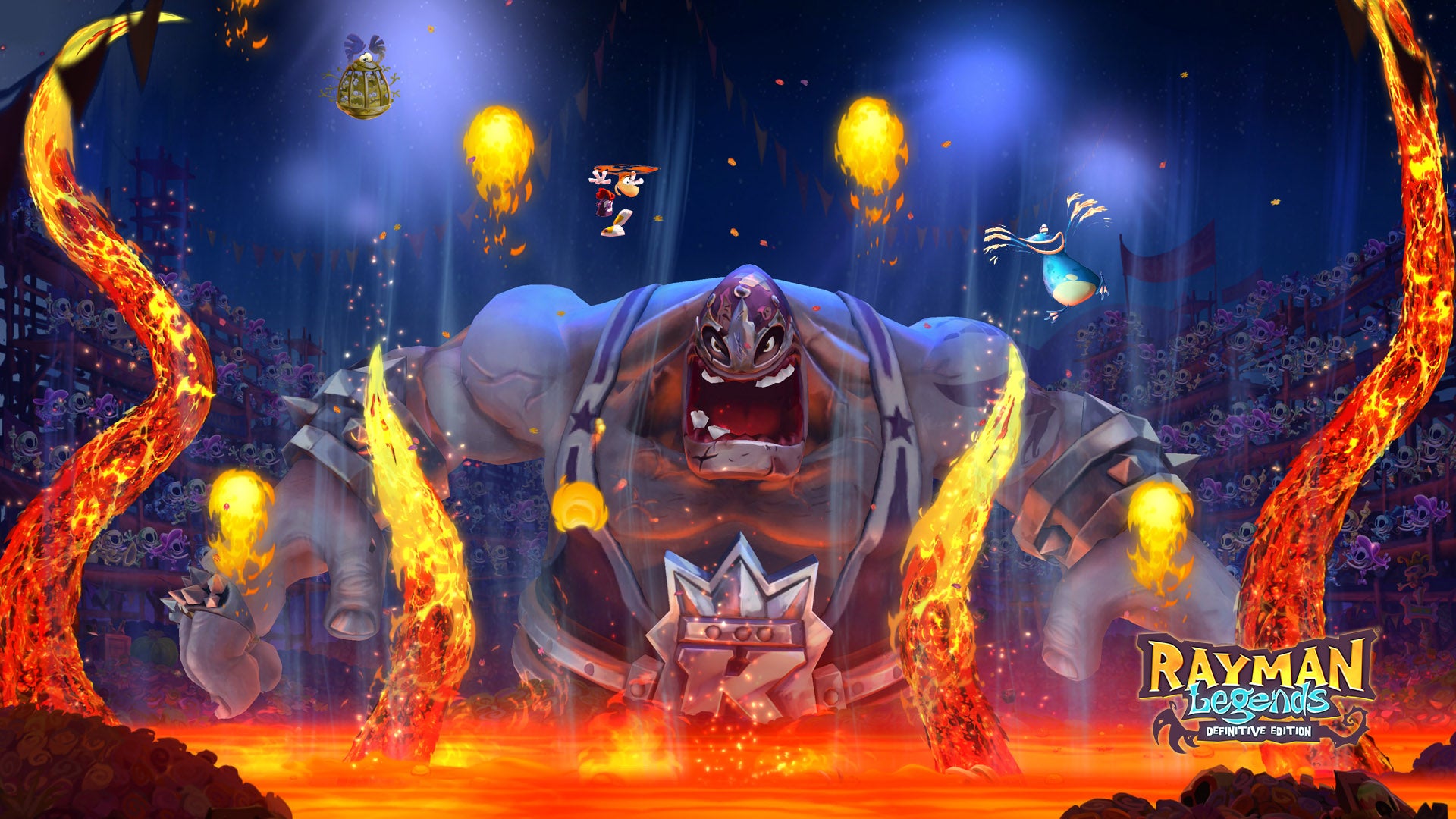 Those who’ve yet to experience it also have the best version yet to look forward to on Nintendo Switch.