What is the Raumfeld Sounddeck?

The Sounddeck is a high-end soundbase that doesn’t just beef up your TV audio. It also gets all hot and streamy as part of a multiroom audio love-in.

Raumfeld’s multiroom offering is looking ever stronger, with the Sounddeck joining TrustedReviews favourites Stereo M, Stereo L, Stereo Cubes, One M and One S in a lineup that covers all sonic bases.

The price tag will make you wince, though. You’d hope it sounds big enough to fill the massive hole it leaves in your bank account.

The Sounddeck is available in black or white – my review unit was the former. It’s a rather sombre-looking rectangular box. A metal top and bottom sandwich a cloth grille that wraps around the front and sides. There’s no design flair here, which is fairly typical of soundbases, but I really expected a little more at this price.

Beneath that grille are four forward-facing drivers and two side-mounted drivers. Underneath, you’ll find a pair of downward-firing subwoofers, with the whole lot powered by a 280W Class D amplifier. Also inside are Wi-Fi smarts, but no Bluetooth. 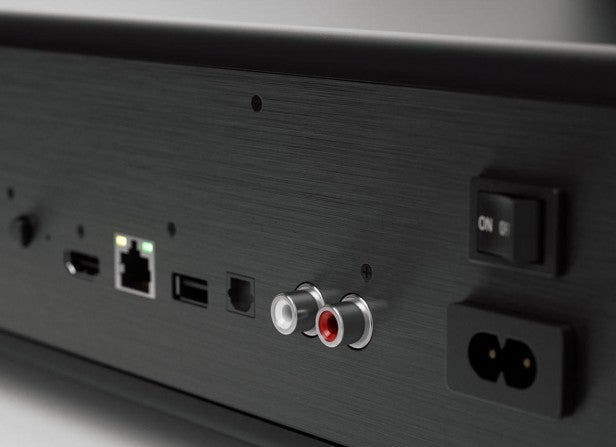 Connection options on the back panel include the all-important HDMI and S/PDIF optical for getting the sound from your TV. For music there’s an RCA phono line input and USB for plugging in a thumb drive or NAS, while an Ethernet socket gives an alternative to Wi-Fi.

The Sounddeck’s controls are split: there’s a mains power switch and Setup button on the rear, and a standby button alongside two status LEDs on the front.

While the Sounddeck itself may not be super-attractive, Raumfeld has lavished plenty of love on the remote control. It’s a stylish, slim, brushed-metal unit that feels like it’s been hewn from a solid block of aluminium. The keys aren’t backlit, but there aren’t many of them, and the volume buttons are set apart below the others, so there’s no real problem operating it in a darkened room.

Curiously, the remote has four buttons simply numbered 1-4. These aren’t mentioned in the supplied instructions. A frustrating hunt through Raumfeld’s online resources revealed – hidden in the FAQs, bizarrely – that these are for the audio presets: Stereo, Arena, Theatre and Voice, in that order.

Setting up the Sounddeck as a straightforward soundbase is simple. If you’re connecting it to a spare HDMI socket on your TV, that’s pretty much it. Just pop your TV on top of the Sounddeck, plug in and away you go.

Connecting via your TV’s optical output is only slightly more complicated. You have to download the Raumfeld app and change the default input to optical, otherwise you’ll need to select the optical input from the remote every time you turn on the Sounddeck.

To connect it to your Wi-Fi network, simply follow the easy steps on the app. As I discovered when testing the Raumfeld Stereo M, it’s best not to add the Sounddeck as your first device if you’re using it as part of a multiroom system.

The first Raumfeld unit added to the network becomes the host (or “null”) device for the entire system and has to be turned on when using any of the others. You can bypass this issue by buying a Raumfeld Expand unit (£49.99) to act as the host for the whole system.

Sound quality from the Sounddeck is in many ways impressive – as it should be at this premium price. It’s capable of immense sonic scale from what’s essentially still a very compact unit with no separate subwoofer.

I found the Theatre mode to offer the best balance for TV viewing, actually offering better vocal clarity than the Voice mode.

Straight from the box, the Sounddeck had a tendency to sound a little boomy at times, with the bass detaching and becoming a flabby distraction. And that’s when I discovered something else that isn’t mentioned in the instructions…

The Raumfeld app features a speaker icon that takes you to the Volume screen, and from there you’ll find an Equaliser option in the top right. It’s a pretty simple equaliser, with sliders to adjust treble, mid-range and bass, but a quick tweak of the latter was all I needed to sort that wobbly bottom-end. Sorted, but not intuitively.

Listening to music streamed over Wi-Fi, with the Sounddeck set to Stereo mode, is a mixed bag. It doesn’t have that small-box quality that hampers so many Bluetooth speakers and weaker soundbases or soundbars, but it isn’t the most exciting listen either. The app itself is slick, and offers support for just about every streaming service around.

Aside from it being overpriced, my other biggest issue with the Sounddeck is the fact that it doesn’t have any kind of display on the unit itself to indicate volume and any changes of input or audio preset. You can check the volume level through the app, but that isn’t an at-a-glance solution.

Should I buy the Raumfeld Sounddeck?

The Sounddeck is sonically one of the more impressive soundbases out there, once you’ve tweaked it for your room and your personal taste. But it isn’t deft enough to justify its high price. As part of a Raumfeld multiroom music system it starts to make sense, perhaps.

Sadly, it’s further hampered by the lack of a display and the fact that Raumfeld has seemingly hidden some crucial functions. That’s just unacceptable at this end of the market.

A room-filling soundbase that’s overpriced and let down by usability issues.