What is the Raumfeld One M?

Services like Spotify, Tidal and now Apple Music are growing in popularity and so are all-in-one Wi-Fi speakers that help you enjoy your favourite artists with ease.

Raumfeld is a relatively new player in the field – in the UK, at least – and looks to compete with Sonos with a full range of Wi-Fi enabled speakers and systems ranging in size and price from the massive Stereo L speakers to the dinky One S. The Raumfeld One M sits between the two – it’s a top quality Wi-Fi speaker that looks great and sounds even better.

Quality comes at a price. The One M is one of the most expensive Wi-Fi speakers of this size you can get, but is well worth it if you value good sound.

Raumfeld One M: Design and Connections

The One M is tastefully understated. The speaker drivers are hidden behind a fabric mesh, while the whole is clad in thick, matt plastic. This is a very solid speaker with a pleasing, swept-back, angular look that should fit into any contemporary living room. Unlike Sonos, it only comes in white with silver trim so if that doesn’t fit in with the rest of your pad you’ll need to look elsewhere. 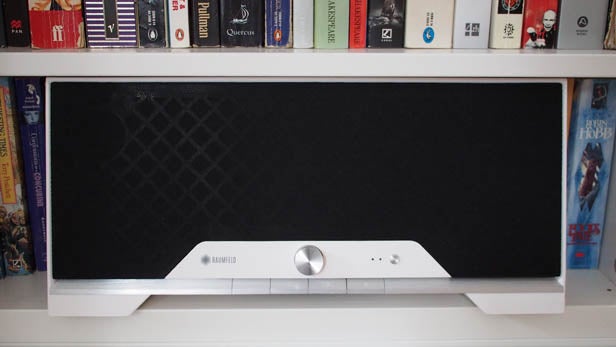 There’s a suitable weighty heft to it at 4.8kgs, so if you are planning to place it on a shelf make sure it’s a sturdy one. And while the Raumfeld One M is larger than some competitors, it’s still slim enough to be placed on one.

A depth of 20.2cm – add a few more centimetres for the power cable – and a height of 18.2cm means it should fit on a typical bookcase, with only a little of it protruding out. You might not be able to fit many books around it, though. At almost 41cm wide, the One M has a bigger footprint than the Sonos Play:5, its nearest rival in terms of price.

If space is a major concern, have a look at the Raumfeld One S. It’s a lot smaller and boasts water-resistant features making it ideal for a kitchen or bathroom, although it’s a significant step down in sound quality (particularly bass) and volume. The One M is geared more towards larger rooms. 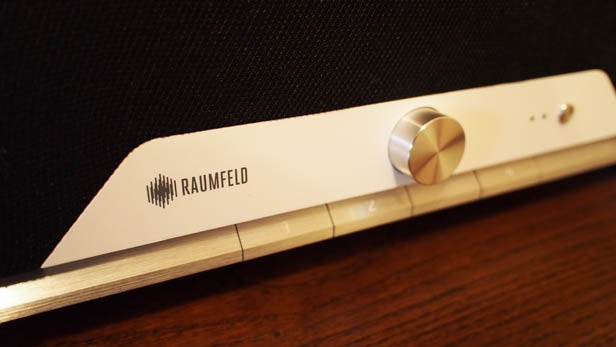 Wi-Fi speakers don’t tend to have many physical controls on them, the idea is to manage them via your smartphone or tablet. The One M, though, has a few knobs and buttons more than most. Pride of place is given to the volume control knob, which is made of metal and feels solid and robust. Next to it are two small lights – one lets you know you’re connected to the network, the other that power is on. Just below are four metal buttons we’ll explain later.

What you don’t get are play/pause or mute buttons. Physical muting isn’t too difficult, though – one quick anti-clockwise turn and the volume can be set to zero. Unlike its key rival, Sonos, playing or pausing music can only be done via app. 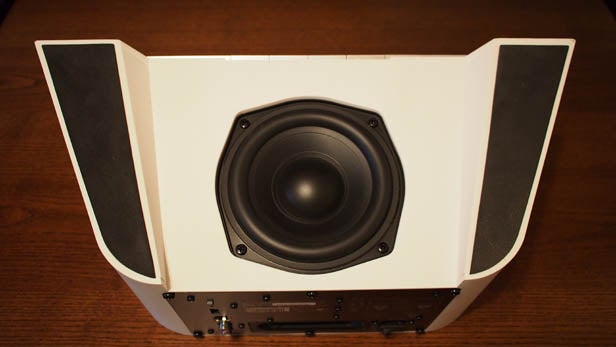 Flip the Raumfeld upside down and you find two “legs” covered with soft pads that help keep the One M stable and keeping from moving around when the bass is pumping. And it will pump. The gap between them plays host to a down-firing subwoofer that provides the low-end thrills.

The rear of the One M plays host to the physical connection ports. There’s a LAN port (used to set up the speaker as well as connecting to your network), a USB port (for connecting to a NAS drive), and a right and left channel line in. 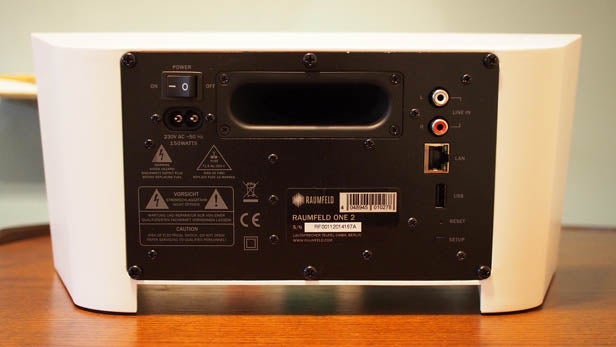 The last is most interesting (and rare for a Wi-Fi speaker) as it lets you connect an external amp, or, more importantly, a TV to the Raumfeld One M. The TV we used in testing had a headphone port we connected to the One M via a 3.5mm stereo jack to two RCA plugs. Plugging it worked immediately, a useful addition if you don’t already have a sound bar.

Don’t expect to just plug the One M in and start streaming from your phone right away – there’s a little bit of work you need to do first, but it’s not too technical or tricky.

After connecting it to power you need to use the supplied Ethernet cable to connect it to your home router. If your router is easy to get to and you have a spare plug socket nearby then no-problem. Fire up the slick Raumfeld app that’s available for iOS and Android and you’ll be off in no time. If your router is in a tricky location (like ours) you might find the setup harder,­ the good thing is you only have to do it once and it only takes a few minutes.

You then have the option of leaving it connected to your router or removing it and using Wi-Fi to stream music to it. If you opt for the second option (and let’s be fair that’s probably why you want a Wi-Fi speaker in the first place) you’ll need to make sure your Wi-Fi signal strength is good enough. The Raumfeld app gives you an indication of connection strength and we found anything above 40% tends to do the trick. Any less than that and you should consider either moving it closer to your router or getting a Wi-Fi extender.

Raumfeld has its own solution for this, called the Raumfeld Expand, that creates an autonomous Wi-Fi signal just for your music. It costs £50, and should be particularly useful if you’re planning to have a multi-room setup of Raumfeld speakers, but we haven’t had a chance to test it yet.

The addition of Bluetooth would make setup simpler, but it’s not exactly rocket science as is.

Raumfeld One M: Interface and App 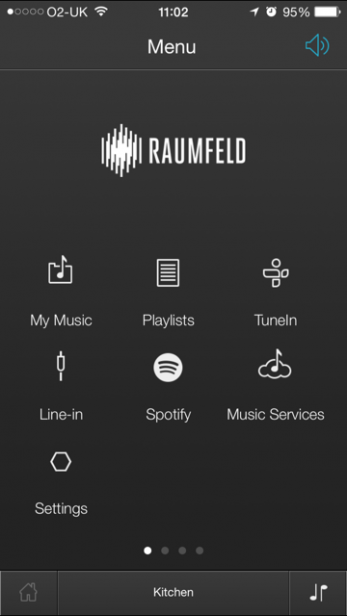 Once set up, the Raumfeld One M is dead easy to use. While not quite as slick as Sonos or Samsung’s, the app is simple and self-explanatory and we’ve had zero connectivity issues using a decent router.

If you have music on a server, the One M will find it automatically and provide you a listing of tracks by artist, album or song title. All you need to do is select your DNLA or UPnP server in the Music Resources section. You can also play music that’s already on your phone or tablet.

Just like its siblings, the One M can play pretty much any format you put its way (including ASF, MP3, WMA, WAV, ACC, FLAC, OGG and ALAC) and supports sampling rates of up to 24-bit/192kHz, if you’ve got the bandwidth to spare.

Sonos has made a concerted effort to add as many streaming services to its app as possible and this is an area where Raumfeld can’t quite compete. That being said, the line-up of compatible streaming services on the One M is strong. You get Spotify (via Spotify Connect), TuneIn, WiMP, Napster and Last.fm with more coming soon. Tidal is not only supported, but actually comes free for the first three months with purchase of the speaker. Best of all it’s the lossless version (£19.99 a month) – that’s a nice little bonus, although we’re not quite sure how long the deal will last. 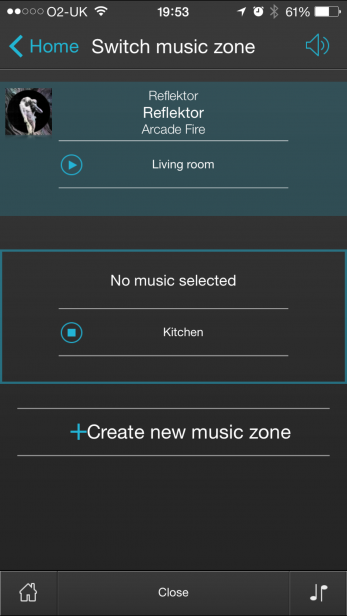 If you have more than one Raumfeld One M speaker the app lets you set up “Music Zones” which works fine for services you control via the Raumfeld app. Locally stored music on your phone or on your network can be played across speakers, as can TuneIn and other integrated services like Tidal.

Unfortunately, Spotify isn’t integrated – you need to use Spotify’s own iOS or Android app – and this means Multi Room isn’t supported. You can’t have the same tune from the same Spotify account playing through more than one speaker at a time, either, although you can with other apps like Tidal.

The four buttons we mentioned earlier can be set to play a radio station, album, artist or playlist of your choice. All you need to do is start playing what you want saved and hold down a button for three seconds. This saves your selection as a preset so you can start music playback without having to fire up the app or even get your phone out of your pocket.

The Raumfeld One M provides big sound in a compact speaker system. As with any setup where the speakers are close together, a stereo image is hard to achieve. It’s something you have to accept for the convenience and small footprint of all-in-one Wi-Fi speakers.

Aside from the 130mm subwoofer, the One M comes with two 25mm tweeters and two 65mm midrange drivers and a 120 watt stereo amplifier – all safely enclosed within the chunky frame.

All this means that you have a small package that delivers velvety, room-filling sound. The Raumfeld One M won’t embarrass you if you’re having a party. Not one jot. With rich bass and a wince-inducing top level volume, it’ll impress you and your friends in any reasonably sized room. 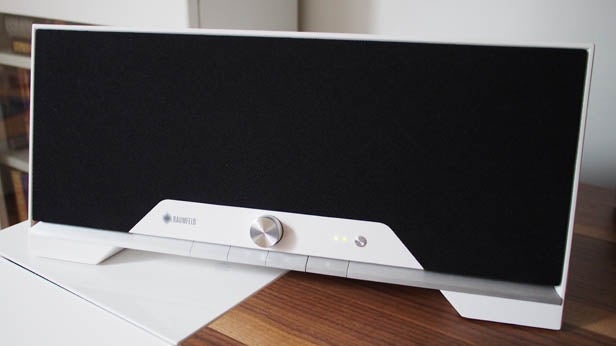 There’s more to it than volume alone. Sound is smooth and balanced, with a deep, yet well-managed, bass – you can tweak equaliser settings if it’s too lively, something we only needed to do with the bassiest of tracks. Best of all it works well with whatever genre we threw at it.

The synth on Leftfield’s Universal Everything draws you in while the bass manages to rattle teeth, whereas Damon’s Albarn’s vocals are crisp and clear on Blur’s most recent album, The Magic Whip. The same is true of the classics from the Guardians of the Galaxy soundtrack with Hooked On A Feeling sounding fresh and fun.

There’s very little to fault with the One M at high volume. The high end gets a little harsh, but only at the very loudest levels. You’ll find it hard to get better sound than this at the price or size.

Should I buy the Raumfeld One M?

If you don’t mind spending a little extra and want the best sound quality possible in a small speaker system then the One M is a great option, especially if you want to use it as a TV speaker. It puts some soundbars we’ve tested to shame.

This is a competitive market these days, though, and if you want to spend less, the Samsung M5 is a solid alternative worth considering.

The Raumfeld One M is a well-crafted Wi-Fi speaker system that sounds great. The quality is terrific for something this size.