Available on PS Vita (reviewed), PS3
They were stars once – the heroes of arguably the best platform series on PS2. Before Insomniac shifted its focus to Resistance and the underwhelming Ruse, and before Sony diluted the brand with the likes of Q-Force and All 4 One, Ratchet and Clank starred in a string of titles that were as slick and innovative as anything Sega or Nintendo could muster, and which continued to astonish as they moved from PS3 to PS4.

3D platformers are out of fashion now, with only Nintendo capable of serving up a hit, and replaying the Ratchet and Clank Trilogy on PS Vita this seems a dreadful shame. As with any reissue there are some rough edges and some elements that haven’t dated well, but when our dynamic duo hit form, it’s still as good as gaming gets. 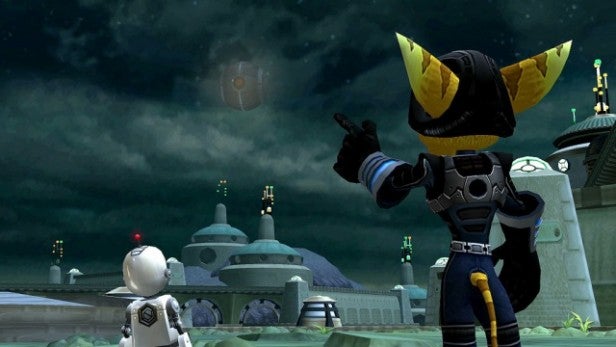 The first game has fared worse than its sequels, yet all the components are already in place. Ratchet and Clank finds a fertile middle ground between Super Mario 64 and old-school platform shooters, giving you a range of different worlds to explore, each one full of areas to be discovered and enemies to fight. The main hero, the long-eared Lombax, Ratchet, has all the moves of a conventional platform hero, with all the double-jumps and wall jumps you can wish for.

Yet Ratchet and Clank’s real genius lies in its weapons and gadgets, either discovered during the game, or bought with valuable bolts from each world’s gadget vendor. Some of the gadgets, like the handy jump-boosting, gliding heli-pack, incorporate Ratchet’s robot sidekick/comic foil, Clank. Others involve grapple beams, oversized water pistols that shift liquids from one place to another, or boots that enable you to grind rails.

Insomniac copied Nintendo’s trick of introducing a new gizmo, then pushing you to find inventive ways of using it. Ratchet and Clank never manages this quite as cleverly as a Mario or Zelda, but it’s still several steps ahead of any rival Western platform series you could mention, with the possible exception of stablemate, Jak and Daxter.

The weapons, meanwhile, seem almost as inventive today as they did when the game was released. Bouncing circular saw blades and globes that fire bombs are just the start; before long you’re messing with guns that suck up smaller enemies and fire them out, claws that fire our arcs of rapidly spreading electricity and rayguns that turned enemies into chickens. This was insomniac developing the signature style that would later evolve into Resistance. Let other developers stick to their boomsticks, rocket launchers and miniguns; these guys were here to have fun. 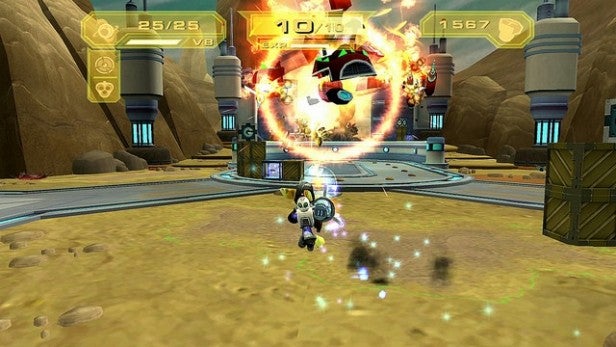 The first game falls down a bit for the limited scale of its environments, but it’s still a smart platformer – jam-packed with bouncing and blasting. It successfully introduces a cast of misfits, fraudulent superheroes and wise-cracking robots, and wields a sharp sense of humour with a surprising level of toilet-focused innuendo for a family-friendly platform game. The graphics which once wowed now look slightly primitive, and the HD update for PS Vita doesn’t make a huge amount of difference, but it’s still a very entertaining romp.

Ratchet and Clank 2: Locked and Loaded is another story. Called Going Commando in the States, it’s a bigger, more polished and more confident game, that takes the basic parts of Ratchet and Clank, then expands and re-engineers them to build an even better and more action-packed platformer.

The levels are larger with multiple more complex objectives, and the designers have grown more confident and inventive. We all loved the spherical worlds of Super Mario Galaxy, but actually Ratchet and Clank 2 got there first, with special mission levels set on similar pint-sized planetoids. On top of this, we get arena challenges where you can earn a tone of extra bolts, battling wave after wave of enemies, hover bike races and space combat sections where you can take on waves of incoming fighters in a throwback to the days of Wing Commander. 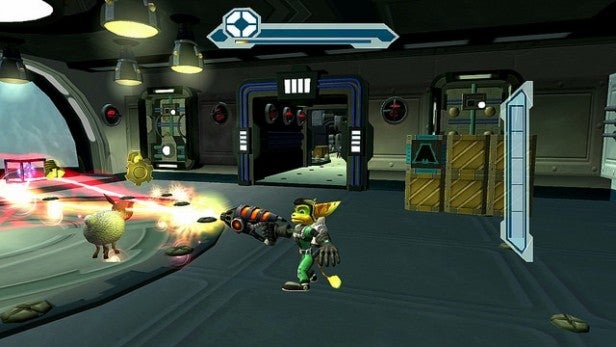 The core gameplay has been polished too. Not only are there new weapons, like the foe-scattering walloper and the fabulous sheepinator, but they now have their own RPG-like progression system, where using one gun enough will eventually make it mutate into an even beefier weapon. Ratchet and his new armour also evolve, adding extra health and extra protection against incoming fire.

This is a good thing, as Insomniac ups the ante in the sequel, throwing more enemies at you at once, and asking you to think strategically, using certain weapons for crowd control and others against tougher foes.

Ratchet and Clank 3 is even more combat-focused, with tweaked controls for strafing and first-person shooting, and with a greater emphasis on weapons and upgrades, with twenty weapons each featuring multiple levels of strength. It threatens to overbalance the game at times, particularly in the battle missions, where Ratchet tackles waves of enemies with different objectives at times. It’s never quite a family-friendly Call of Duty, but it gets weirdly close at times. 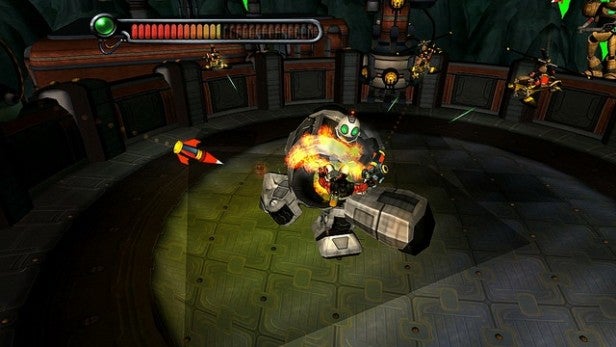 Yet if the action occasionally goes overboard on combat, there’s compensation in the game’s other elements: the sequences which see a giant-sized Clank battling it out with equally gargantuan enemies, or an infiltration mission which sees Ratchet in disguise and rattling out commands in alien lingo, in a simple rhythm action mini-game, while Clank dodges lasers and solves switch puzzles with the aid of his robotic minions, the Gadgebots. We could probably do without the Captain Quark 2D platform levels, with their ropey controls, but 95% of the time, Ratchet and Clank 3 is an absolute blast.

This was a series that evolved. You can see it evolving graphically, with each chapter making its environments not just larger but more sumptuously detailed, with more sophisticated effects for the weapons and more shiny surface flourishes. Without high-res textures and high-polygon models to work with, Insomniac focused on delivering maximum personality as efficiently as possible, and all three Ratchet and Clank games have their own distinctive cartoon style.

Sure, Ratchet and Clank looks pretty dated, but the second and third games still look remarkably good today. Our only complaint is that the visuals lack the sharp edges and crisp look of 2012’s 1080p PS3 version, while the cut-scenes haven’t been upscaled at all. You’re looking at PS2-standard visuals, not anything more. We’re a long way from the visual quality of Ratchet and Clank: Q-Force on PS Vita, though given that game’s shocking frame rate, this isn’t entirely a bad thing. 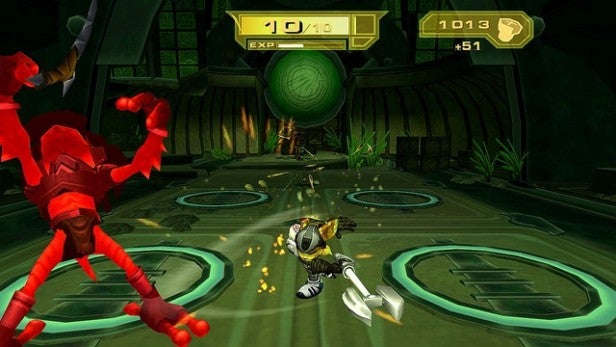 You can also watch the series evolve in terms of storylines, with the narratives growing more complex, more self-referential and, well, funnier with time. Most of all, it’s a great example of how iteration can turn a good series into a great one, as the developers hone what works and reject what doesn’t.

There are some sticking points. Camera angles are occasionally rough, and all three games are a bit tight-fisted when it comes to checkpoints, which isn’t a problem in the easy sections, but can drive you mad on the more difficult challenge levels. Some of the controls, particularly strafing and the camera controls, either prove unreliable or need tweaking before they’re really usable. Using the rear-touchpad to strafe can be a nightmare. Most seriously, this PS Vita version omits Ratchet and Clank 3’s excellent multiplayer mode; a shame on a system that could easily support it.

For that reason, you might want to opt for 2012’s PS3 version over this year’s PS Vita version, as the visuals look sharper, the frame-rate jumps from 30fps to 60fps and the multiplayer mode is still intact. The good news, though, is that you don’t have to choose. You can have both versions for the one price through PSN’s Cross Buy scheme (and it’s actually a bit cheaper if you buy the PS3 version through PSN then download the PS Vita games). Annoyingly, there’s no cross-platform saving, but that’s not a disaster; we’d happily play the whole trilogy in handheld form.

Verdict
Ratchet and Clank Trilogy is a solid PS Vita port of a brilliant franchise, giving you three storming, action-packed platformers that still stand up well today. The slightly fuzzy graphics and lack of multiplayer are disappointing, but when you’re getting three hefty, hugely entertaining single-player games it’s hard to moan. Smart, inventive, and crammed full of ludicrous weaponry, these three games have stood the test of time. In fact, you’ll have as much fun playing Ratchet and Clank now as you would have done more than a decade ago.