Exclusive to PS4
Built to accompany Sony’s new CGI animated movie, Ratchet and Clank sits somewhere between a remake, a reboot and a greatest hits package; a radically reworked version of the duo’s first game that feels more like a summary of their works to date. Its combination of rather retro platform-shooter gameplay and cutting-edge visuals shouldn’t work, and doesn’t always, but at its best it’s a return to form for one of PlayStation’s great platforming teams, not to mention a sign that the studio that last gave us Sunset Overdrive hasn’t lost its touch for the genre.

Up to a point, it’s a retelling of the first game, pitting Ratchet and his compact robot partner, Clank, against a mad doctor and a ruthless corporation with plans that might destroy the galaxy. Those of us who played the original won’t be too surprised by the structure, either, which sees our heroic duo tackling tasks across a string of different planets, saving locals from invaders, exploring the sewerage system, collecting brains from floating space-octopi or preventing marauders from harvesting the water. 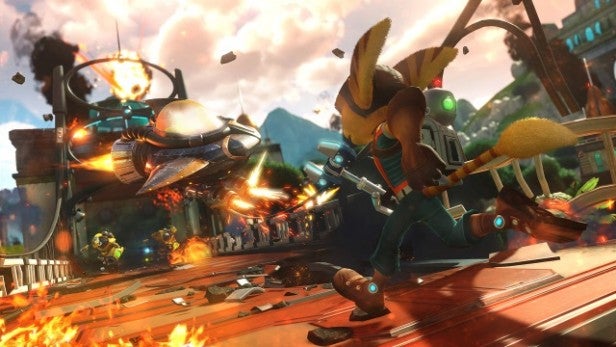 And the gameplay? Well, the fundamentals take us straight back to the glory days of the PS2, as Ratchet leaps from platform to platform, swings from floating anchor points and blasts his foes with a range of comically destructive weaponry. Carried as a backpack, Clank provides support through his own helicopter and jet-pack upgrades, and even gets his own turn in the spotlight through a series of puzzle sections. These have long been a core part of the franchise, and using the dry-witted robot to place reprogrammable gadge-bots as jump-pads, power-cells and bridges makes a nice change of pace from the action-packed acrobatics that constitute the main part of the game.

You could describe Ratchet and Clank as dated, and there’s no question that it feels a little old-school. There’s no fancy-pants cover system or stealth to be found, just a lot of classic strafe-and-fire blasting against numerous enemies or tough armoured foes – occasionally at the same time. Enemy AI is relatively primitive, and while the individual planet levels are much more expansive than they were before, they’re not huge open worlds by any means. 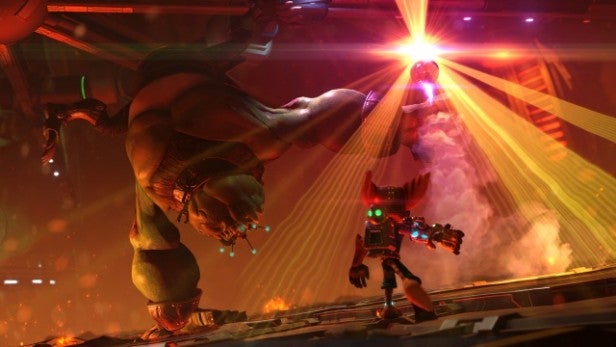 In fact, one of the remake’s biggest pleasures is the same as the original’s: Insomniac’s crazed love of bizarre guns and gadgets with a side of crude innuendo. This is still a game where a disco ball weapon gets your enemies dancing so that you can pick them off with ease, or where a gun fires circular saw blades that career off the walls and through your foes. It’s still a game starring NPCs called Skid McMarx where the biggest gun of all is the RYNO (or Rip You a New One), where you can spawn your own combat droid, Mr Zurkon, who dishes out a stream of cheesy threats and one-liners in a deeply lovable deadpan style.

The armoury is an odd mix of hits from the first game and much-loved later additions, though you’re bound to find a few of your favourites missing. And, in case you’re wondering, Insomniac isn’t entirely reliant on old ideas. One new weapon, the Pixelator, transforms enemies into blocky voxel versions of themselves as it kills them, while another, the Proton Drum, is a spherical beatbox of destruction, throwing out damaging waves of pink energy with a rock-steady rhythm. 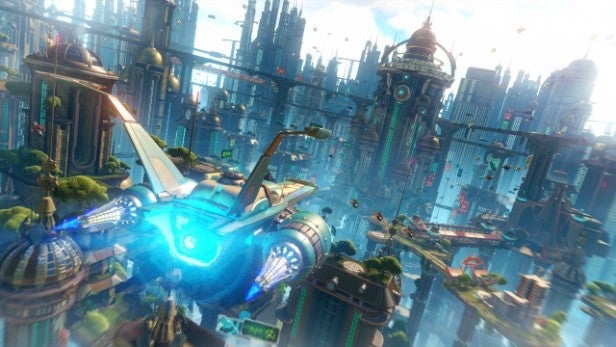 So, what’s changed? Well, it really comes down to scale and polish. More, bigger, better seems to be the credo, with more and larger planets to visit, more interesting and varied scenery, more enemies on screen at once, grander set-pieces and bigger, more dangerous bosses. Sometimes this approach goes over the top, as you’re swamped with enemies and struggling to make headway in the most challenging boss battles, but most of the time it works a treat. While it’s style might mark it as a family-friendly game, Ratchet and Clank can be as frantic and absorbing as any more serious shooter.

To be honest, it takes a while to come together. After a few wow moments in the early stages the game threatens to become an uninspired retread – the gaming equivalent of an old band getting back together for one last money-grabbing greatest hits tour. A rather lacklustre racing section and some dull turret sequences don’t help. Yet about a third of the way through it picks up pace, with the kind of spectacular rail-grinding, jet-packing and full-on warfare we saw in the superb PS3 entry, Tools of Destruction, and smarter puzzle sequences to boot. 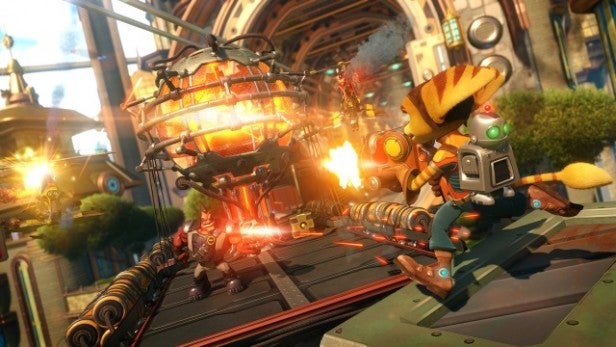 There’s also more sophistication in play. Ratchet and Clank has always had character progression, as you smash crates and grab bolts to buy new guns then use them to level them (and your armour) up. Now, however, we have new layers of complexity. For a start, we get an almost RPG-like upgrade system where shards of raritanium can be used to unlock upgrades on a hexagonal board, where surrounding mystery bonus upgrades will unlock them.  On top of that, Ratchet and Clank throws in a new collectible card activity, where collecting sets unlocks new super-weapons and gadget enhancements, while duplicate cards can be used in numbers to substitute for the missing card of a set.

But if all this stuff makes Ratchet and Clank a better game, it’s the level of polish that brings Insomniac’s franchise bang up to date. Ratchet and Clank might be the first game of its type where the in-game action actually looks better than the impressive cut scenes, as sophisticated, near-movie quality lighting, detailed textures and fantastic real-time reflections work together to create one of the most dazzling platformers you’ve ever seen. Nor has Insomniac skimped on background detail. Once upon a time, the gleaming towers and busy skyways of the original Ratchet and Clank’s sci-fi cities defined what a PS2 showcase could look like. In its own way, those of this remake repeat the same trick. 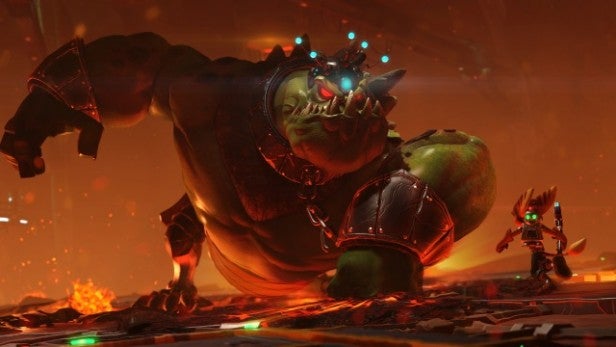 There are some disappointments. There’s no co-op or multiplayer mode, and while that’s not necessarily a bad thing given the series history with such things, that leaves you with a decent-sized single-player story and a tougher challenge mode to conquer when that’s done. The flying and space-combat sections are engaging and spectacular, but feel a little half-baked by modern standards; our pointy-eared Lombax hero is no Fox McCloud. A few more truly new and innovative weapons wouldn’t have gone amiss. Overall, though, this is almost everything a fan could want from a Ratchet and Clank remake, and if this turns out to be the last we see of them, they go out on a high.

Verdict
More than just a remake, this feels like a lap of honour for Ratchet and Clank, with all the frantic action, bizarre weaponry and cheeky innuendo a fan could wish for. Being picky, you might say that it sticks a little close to the old templates, but at least it does so on a bigger stage with a spectacular sense of scale. Only time, sales and the movie’s box office will tell if we’ll see more of this dynamic duo, but I hope so. This is a pretty good way to make a new start.