Raspberry Pi 4 Model B gets a bit toasty and could do with improved cooling if you plan to push it hard, but that's the only minor complaint about what's otherwise a brilliant computer. A faster processor, dual 4K HDMI outputs, USB 3.0 ports, a faster Gigabit Ethernet port and a speedier microSD card slot make this the best Pi yet.

With the launch of the Raspberry Pi 3 Model B+, the tiny hobbyist computer came within touching distance of being a fully-fledged desktop computer. With the Raspberry Pi 4 Model B that dream is realised.

With a more powerful processor, a choice of RAM, hardware H.265 4K video decoding, dual HDMI outputs and proper Gigabit Ethernet networking, the Pi 4 is a massive step up performance wise from what’s come before. It gets a touch toasty, and the new board layout means the new version isn’t compatible with the old, but these are minor details against what’s otherwise a brilliant computer.

Raspberry Pi 4 – What you need to know

The Raspberry Pi 4 has a much more powerful processor and the option for more RAM, but it gets toasty

One of the key differences with the Raspberry Pi 4 Model B is that it has a more powerful processor; the quad-core Broadcom BCM2711 SoC. Running at 1.5GHz, this chip is only 100MHz faster than the 1.4GHz quad-core Broadcom BCM2837 used in the Pi 3 Model B+, but the speed difference between the two is far higher. This is because the Pi 4 uses ARM v8 Cortex-A72 cores, rather than the older Cortex-A53 used by the Pi 3 Model B+.

As well as boosting the CPU, the Pi 4 is also the first in the line to offer a variety of different memory sizes, with 1GB (£34), 2GB (£44) and 4GB (£54) options available. And, the Pi 4 uses more modern DDR4 RAM, too. Installing more memory makes the Pi 4 better suited for more complicated projects or for using it as a desktop computer.

Running some benchmarks, you can start to see the difference between the two systems. Using Sysbench to calculate all of the prime numbers up to 10,000, the Raspberry Pi 3 Model B+ completed the test in 35.94s; the Pi 4 in 23.23s.

That’s all good news, but it’s worth mentioning that the Pi 4 gets very hot, and if you push it too far, the CPU throttles down and a thermometer icon flashes onscreen to tell you that the computer is hot. Sat idle overnight, I measured the external temperature of the Pi 4 at 61C; after running benchmarks, the external chip was 71.3C.

That makes the Pi 4 rather warm and you can even feel the heat through the case, so you should be careful handling it at these temperatures. The heat has a knock-on effect on performance. Without any cooling on the Pi 4, the Sysbench benchmark took 28.78 seconds to finish. 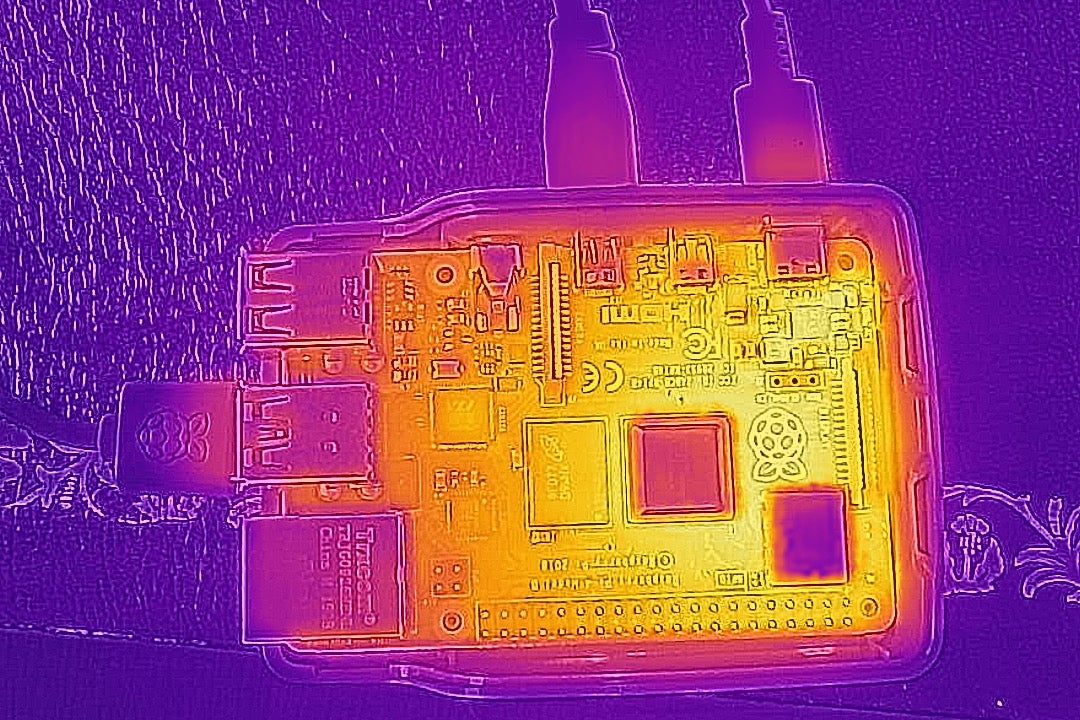 Running at full pelt, the Pi 4 can get quite warm and the board’s too hot to touch comfortably

The Pi 4 is built, as with the previous models, for continuous operation, with enough thermal headroom for a short performance sprint. Still, if you want to push your Pi 4 a bit harder than the default, a heatsink and a case with a fan wouldn’t go amiss.

As well as boosting the CPU, the Pi 4’s Broadcom VideoCore VI GPU is far faster than the Pi 3’s GPU. Firing up OpenArena and setting the resolution to 1280 x 720, the Pi 3 managed the built-in time demo at 27.8fps, while the Pi 4 managed 41.4fps

These improvements all mean that the Pi 4 is far more capable than its predecessor, particularly in desktop use. Where the older generation of products felt a bit slow and you’d have to wait for a response, the Pi 4 is smooth and responsive. In fact, I typed this entire review on the new model using Google Drive in Chromium and didn’t feel myself reaching for my Mac once.

You can run two monitors and play 4K video on the Pi 4, but there are some limitations

As well as being faster, the Pi 4’s GPU can run two monitors thanks to the dual mini-HDMI ports on the side. You can run two 4K monitors, although they’re restricted to running at 30Hz, which feels a little jerky for desktop use. Alternatively, if you turn on the 4K HDMI mode in Raspbian, the Pi Foundation’s officially supported OS, you can run one 4K monitor at 60Hz and then a second Full HD display, which probably makes more sense, although it uses a bit more power. Hardware H.265 (HEVC) decoding is built into the Pi 4, which is good news, but at the moment the media players in Raspbian aren’t optimised to use this feature. As a result, I couldn’t get any 4K video to play smoothly on the new computer.

There’s a new version of OpenELEC coming out, which isn’t currently available through the NOOBS installer, which will have hardware 4K support. Support in Raspbian should be addressed in the future.

Even so, dual monitor support at higher resolutions has to be applauded and it makes the Pi 4 more like a full computer than its predecessors.

The Raspberry Pi 4 has faster networking and storage

There’s 802.11ac Wi-Fi built in, which I measured as capable of 95.5Mbps using iPerf. That’s not the kind of performance that’s going to change the world, but it should be quick enough for most people’s broadband connection. There’s also Bluetooth 5.0 built in.

It’s good to see that the Gigabit Ethernet port has been improved to run at full speed, whereas on the Pi 3 it was limited to 300Mbps. Running iPerf, I clocked throughputs of 896Mbit/s, which is pretty much the maximum speed you’re going to get out of this type of connection. For transferring files over your home network that’s a big improvement. 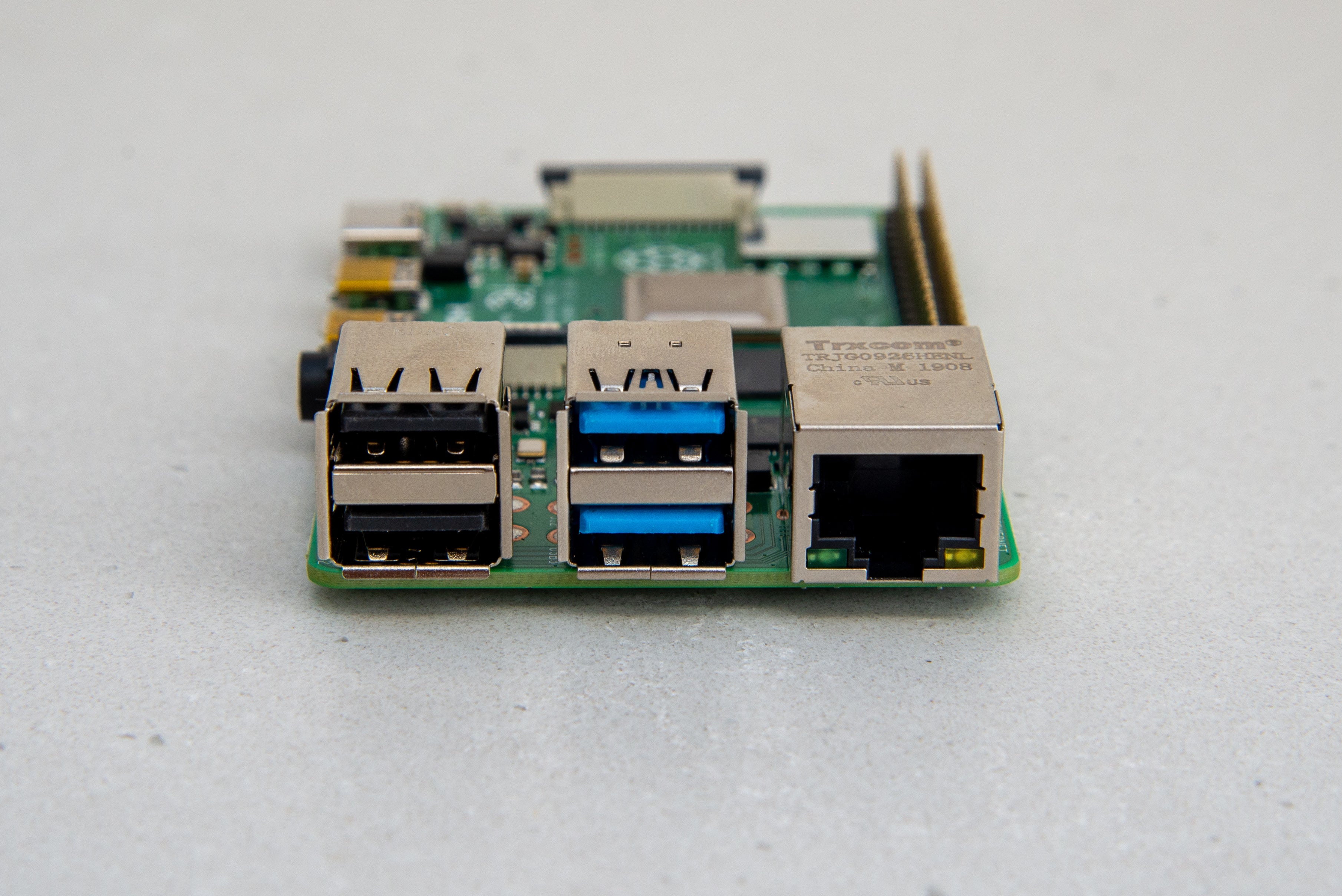 There’s a Gigabit Ethernet port that runs at full speed and USB 3.0 ports

The Pi 4 also has a faster microSD card slot, offering up to 50MBps, which is double the speed of the one in the Pi 3. For booting and loading applications it makes a noticeable difference, provided you fit the Pi 4 Model B with a decent SD card.

There are also two USB 3.0 ports on the rear of the computer so that you can plug in fast external storage. While the USB 3.0 connection isn’t fast enough to really push an SSD, you can still get decent transfer rates. The ideal situation is that you use a fast SD card for the OS and booting, then you can use an external SSD for all of your storage.

With a new board layout, the Raspberry Pi 4 won’t fit in old cases, but that’s a minor price to pay for the improvements

All of the changes have meant that there are some changes to the board layout. For starters, the USB ports and Gigabit Ethernet port have switched places at the rear. There are now two micro-HDMI ports, rather than one full-sized HDMI port. And the power input is now USB-C, as the Pi 4 needs 5V 3A of power, rather than the recommended 5V 2.5A of power of the older models. 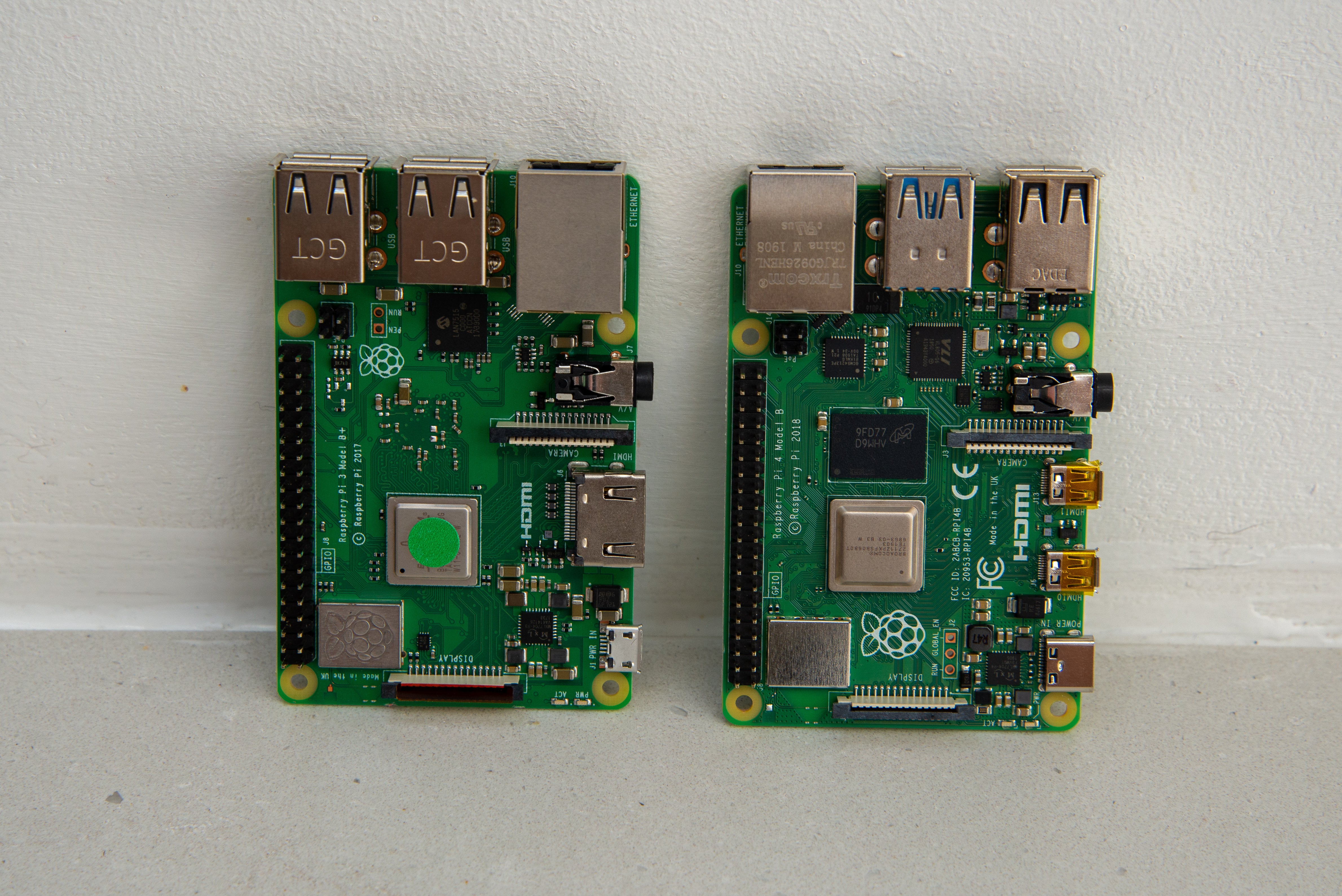 All of this means that the Pi 4 will need a new case as it won’t fit in Pi 3 cases. That’s a minor price to pay and you can buy an official Raspberry Pi 4 Model B case, decked out in red-and-white plastic. 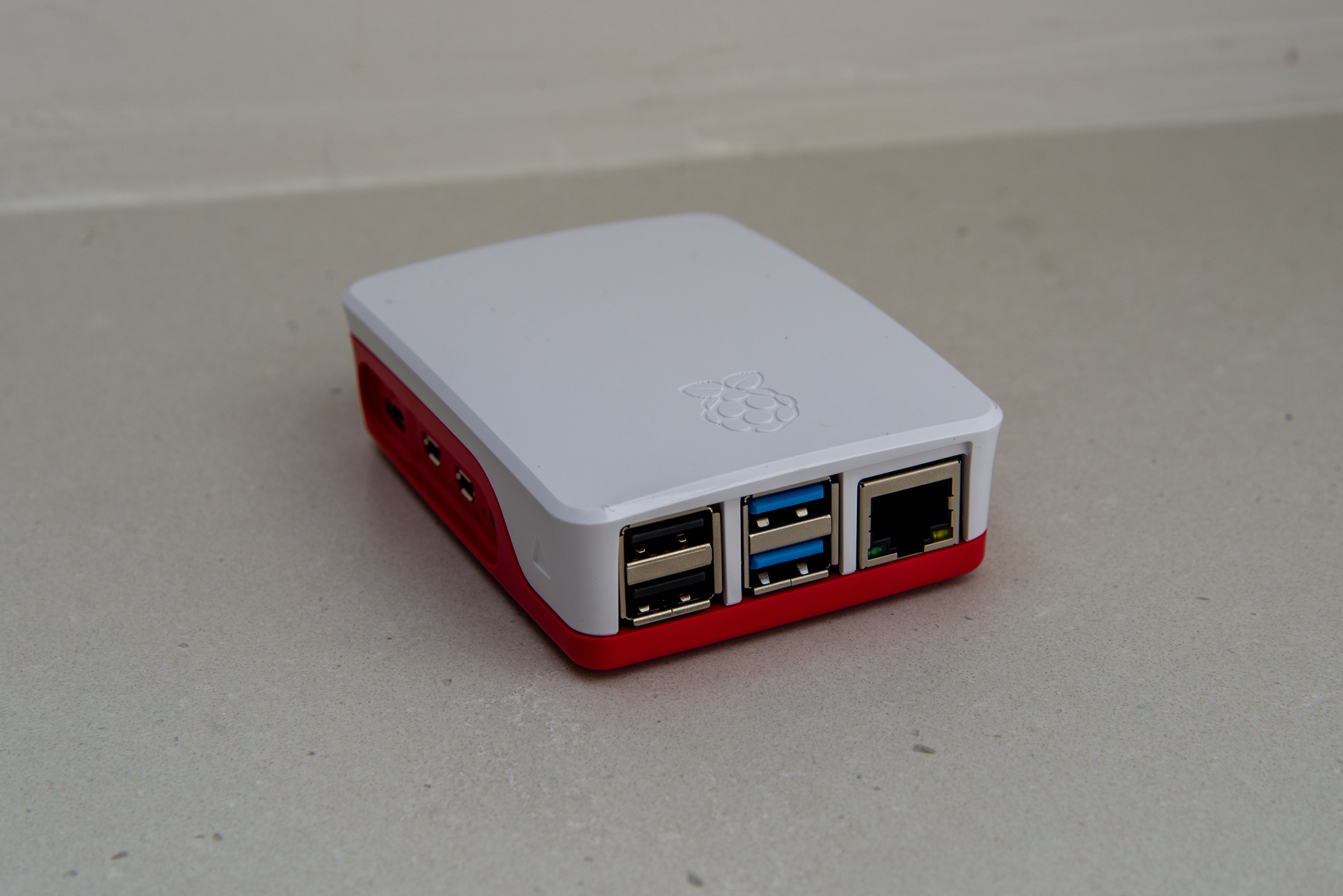 There’s an official case for the new Pi 4

It’s what’s stayed the same that helps the Pi 4. So, you still get the 40-pin GPIO port (which now switches faster) and there are the same camera and display connectors inside, so you can continue to use these peripherals in your projects.

Maintaining these connectors from previous Pi computers means that you can easily transfer your old projects to the new Pi. Or, if you’re starting from scratch and are looking for some inspiration, old projects that you find online will work with the new board.

Should I buy the Raspberry Pi 4?

There are a few minor issues with the Pi 4: it could do with cooling if you want to push it hard, and the current lack of 4K video playback is disappointing. That all said, the Raspberry Pi 4 Model B is the best mini computer you can buy.

The faster processor and choice of RAM dramatically increase what this computer is capable of. Throw in the fast microSD card slot, USB 3.0 ports and dual HDMI outputs, and the Pi 4 is now a fully-fledged desktop computer. That’s good news if you want something small and energy efficient, or you just want to develop on the Pi and want a smoother experience.

There are other single-board computers available, but none that have the range of features and support that the Raspberry Pi does. While the Pi 4 might not be quite ready to replace your desktop yet, this model is a powerful upgrade on the previous model and lets you do more than ever.