Raptor Gaming is a big name in PC gaming peripherals in its native Germany. However, here in blighty, I’d hazard a guess that the name is new to most of you. That could all be about to change, though, with the release of this, the Raptor Gaming M3 Platinum. 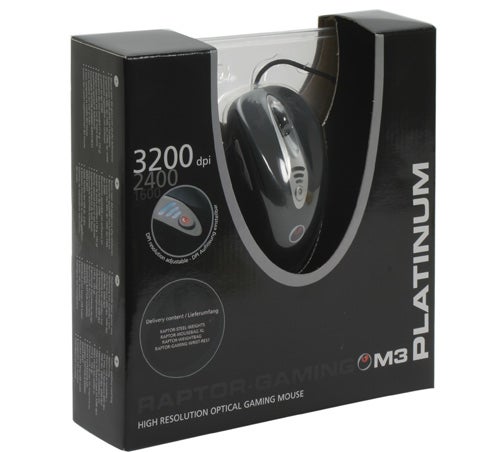 On the surface there doesn’t appear to be much that sets the M3 Platinum apart from the myriad other gaming mice out there and, even on close inspection, that’s still the case. Yes, it has switchable DPI with a maximum level of 3200, it also includes that latest feature that is apparently needed by all gamers; adjustable weights. However, none of these are exactly ground-breaking. What it does manage to do, though, is combine them all in a complete package that together provides more options than we’ve ever seen in a mouse. 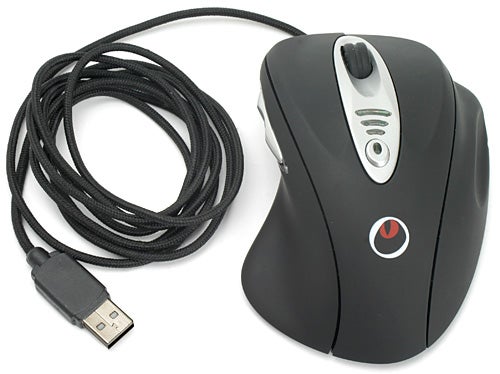 Straight out of the box, it does little to impress with its styling being somewhat typical. The soft touch plastic surface and aggressive moulding, though, feel instantly comfortable in the hand. Likewise all the major buttons fall nicely into place under the usual finger positions. Indeed our only ergonomics complaint would be the DPI switch button that sits back from the scroll wheel. It’s set so far back that it’s near impossible to press without completely adjusting your grip – something that no gamer would ever consider doing mid-game. After a while, I got the hang of pressing this button with the palm of my hand (the part just below my fingers) but it isn’t exactly an elegant manoeuvre. 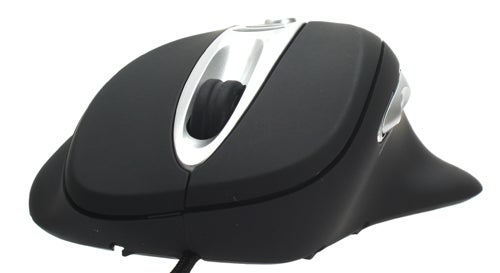 The actual process by which you switch DPI levels is reasonably simple though. You press the DPI switch button then roll the scroll wheel up or down to increase or decrease the sensitivity. There are four levels to choose from; 400, 800, 1600, and 3200, so there isn’t the level choice of many rival devices – in particular the Steel Series Ikari, which allows you to fine-tune DPI levels to the exact number you want. Indeed, while the DPI switching is reasonably easy, it simply isn’t quick enough to do mid-game so it’s more of a set and forget option than anything else. 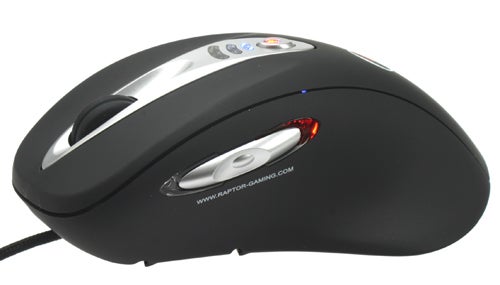 As for the tracking mechanism itself, it’s a fairly standard laser system. It tracks well on just about any surface you care to think of, including glass, and was accurate throughout our testing with no random jumps or twitches. It coped well with both gaming and desktop work remaining accurate even during high speed manoeuvres and was completely lag free.


Perfectly timed head shots shouldn’t be a problem for this mouse as its two primary trigger buttons are wonderfully light and responsive. Conversely the back/forward buttons on the left side require a good push to activate, which I quite like as it prevents you accidentally pressing them in the heat of battle. 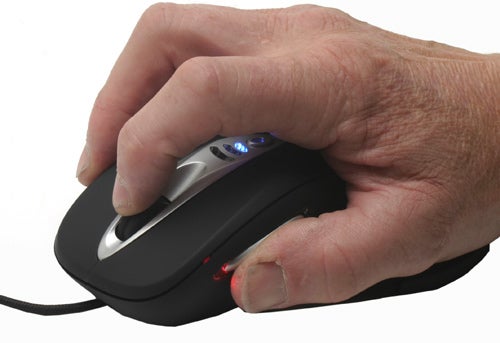 The scroll wheel has a soft and sticky rubber surface, which gives just the right level of purchase for your finger. It’s also of the old style with clearly defined notches, a reasonable level of resistance, and no left/right tilt capability. While this makes the mouse (arguably) less useful for desktop work, it is the perfect scenario for gamers who want precise control of their scroll wheel without any of the gimmicks.

However, one area where Raptor has succumbed to the latest trends is with its adjustable weight system. This adds a degree of ballast to the mouse so it offers more resistance, which some people apparently prefer. I’ve yet to come across someone that does actually like their mouse heavier than necessary but apparently it’s something consumers want so Raptor has thrown it in.


To change the weights, you must pop off the two glide pads from the bottom of the mouse, wherein you’ll find two foam rubber inserts filled with small steel cylinders. You simply add or remove as many of the steel weights as you like then put the foam rubber back and replace the glide pads. It’s a pretty ingenious system all told, though I still maintain it’s essentially pointless. You may disagree. 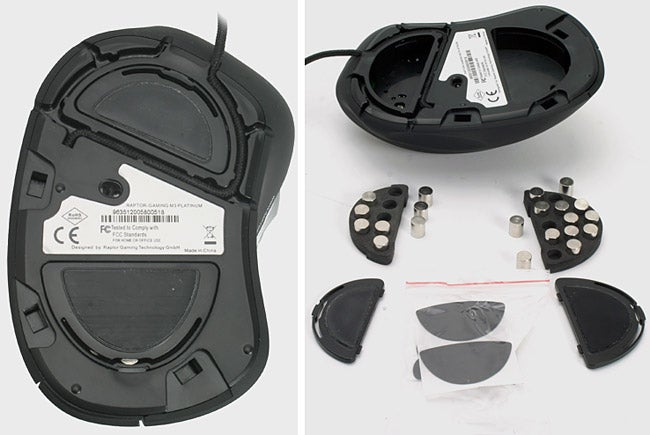 What this system has enabled Raptor to do is create an interchangeable glide pad system. Simply flip the flaps over to choose between one large pad and two much smaller pads. Again the theory is to give the user a choice as to the resistive feel of their mouse. 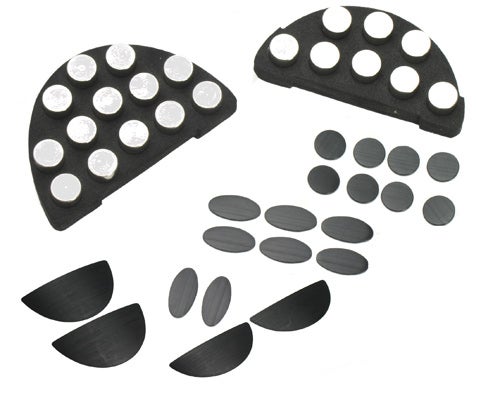 Another neat feature is the cable routing on the bottom. This enables you to choose from which part of the mouse the cable protrudes to prevent it getting in the way of the other detritus on your desk. We’re not sure you really need six different options but at least you can be assured of getting it just right. Also, we love the cable itself. It’s braided, like many gaming mice, but this is the first one we’ve used that actually lives up to its non-tangle claims and at two metres long there’s plenty of it as well. 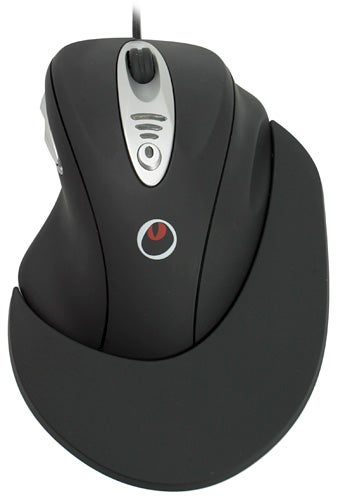 Completing the ergonomics features of the M3 Platinum is a peculiar wrist rest attachment. This clips to the bottom of mouse and protrudes round the right side and back. It’s meant for ‘palm’ mouse users – those that wrap their whole hand around the mouse and use their arm for movement – and it prevents your wrist dragging against you mousemat. It certainly seems to work well, in so much as it does what it sets out to do, but nobody in the office felt it actually improved their ‘mousing’ in any way. 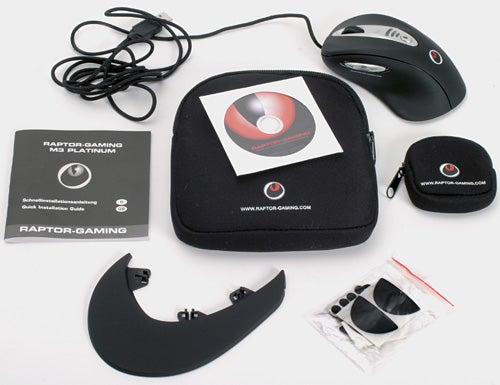 Indeed this would be our overall impression of this mouse. It throws everything, including the kitchen sink, into the mixing bowl and whizzes it up to a smooth impressing looking bubbly broth. Unfortunately few of those features are particularly brilliant or even needed, so our mouse soup may look the part but like so many dishes it has become overly complicated and the pure mousing flavour has been masked in the process. Essentially, it’s a good mouse with all the features you could want but we simply feel other mice do the basics better.


If you’re not sure what sort of mouse you want and feel you haven’t quite settled on your preferred style yet then the Raptor Gaming M3 Platinum gives you the option to play with just about every setting you can think of. However, you pay the price for all that adjustability and if you know what sort of mouse you like, there are better, cheaper alternatives.