There are times when owning just a PS2 would make you feel like a second-class citizen. Sure, you get your share of great exclusives – a God of War, a Gran Turismo. True, you get just about every third-party game going, and a few in advance of other consoles. But you do so knowing that you’re nearly always getting the worst looking version going, the one with the dingy, low-res graphics; the patience-stretching load times; the imprecise analogue controls; the one without the flashy online features. You might be in the majority, but you could be left feeling like you have missed out. 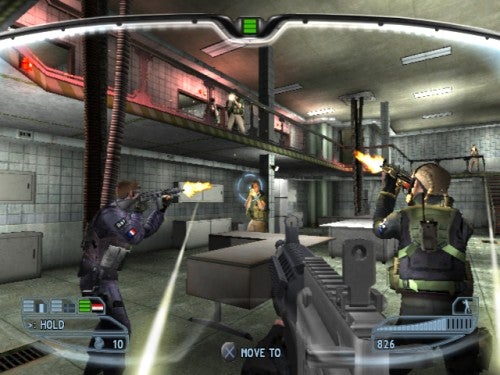 In the past, Rainbow Six could leave PS2 gamers feeling like this for good reason. Look at any review of Rainbow Six 3 going, and most will include something on the lines of “Get the Xbox version if you can.” The initial PC Version was still full of the tedious route-planning stuff that used to put off the adrenalin-fiend contingent, and the Gamecube version suffered from a lack of online play, but most people were convinced that the PS2 incarnation didn’t measure up – it just didn’t have the same level of polish. If you wanted a tactical shooter, Ghost Recon and SOCOM seemed better bets by far.

For the most part, Rainbow Six: Lockdown doesn’t suffer the same fate. It’s still missing a few features of the Xbox version, but there’s a feeling that this time around, Ubisoft have tried hard to make every system feel special. 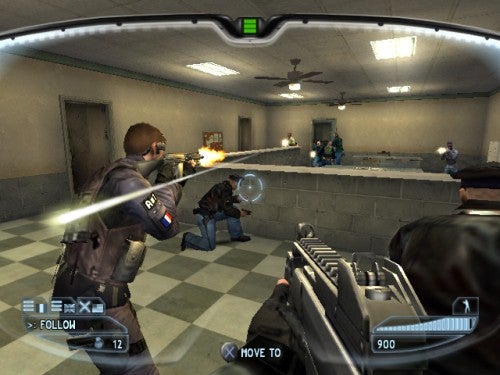 Like Rainbow Six 3, this is a very console-friendly tactical shooter. You have a squad to command, but it’s all kept as simple as humanly possible. The targeting reticule on-screen also doubles for commands, chosen using the D-pad from a context sensitive menu that appears when you focus on a corner or a door. Target the latter, for example, and your three troops can be ordered to open the door and then clear the room (note: this means shoot anyone they see, not tidy up), blast the door open then clear, shotgun the hinges then clear, or open then throw a grenade, or one of a number of other combinations. Even better, they won’t do anything until you press a button to send the ‘Go’ code. This means you can get them to enter some rooms from one entrance while you storm in heroically from the other side. It’s fairly simple, but it works.

And if sweeping and clearing is the name of the game, the level design this time around is all about keeping the action flowing. I won’t go into details of the plot; needless to say it’s the usual Tom Clancy game nonsense about terrorist organisations attacking worldwide targets with nanotech bio-weapons, but it sends you as far as South Africa, Amsterdam, Edinburgh, France and the Sahara into a series of levels full of large chambers or outdoor spaces narrowing nicely into smaller corridor choke points. There are obvious set-pieces where you face a mass assault or concentrated sniper fire, but every level has its high points and a look and feel all its own.


In addition, a scattering of missions boast a sniper mini-level, where you attempt to blast the bad guys before they can damage the rest of the team. It’s all a bit Silent-Scope light, and hardly the killer feature Ubisoft claim, but it is good fun and adds a little extra variation. 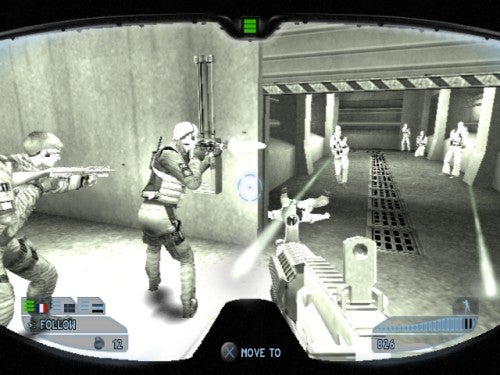 More fruitful efforts have been made in giving your team some personality this time around. You can actually see their faces most of the time, and the cut-scenes take pains to give them little quips or hero moments that show they’re not just faceless drones but human beings. This even extends into the game, where they all have their own comments and exclamations to make while taking fire or clearing a room.


It’s a partial success, mainly because you can only believe these guys are human if they behave in a faintly rational manner. At their best, your team-mates are smart and ruthlessly efficient, clearing rooms, scouting corridors and blasting bad guys before you even get a look in. At other times, they struggle for position in order to open a door, wander into the line of fire, or decide to explore the room beyond without worrying about the firefight going on behind them. In my worst case yet, I witnessed in horror as all three squaddies took turns to descend a ladder backwards into a room packed with gun-toting goons, only pausing once the shooting started, presumably to make an easier target. Without ordering a halt and showering the room with grenades and pot-shots, it was virtually impossible to proceed. 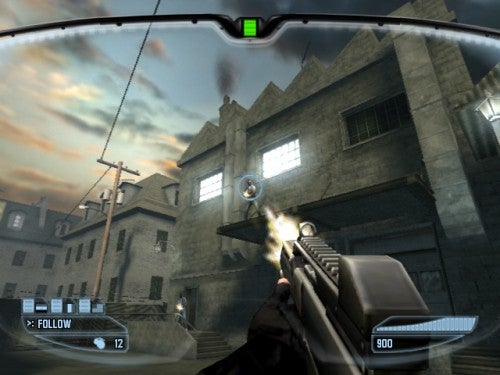 On the plus side, the enemy can be just as variable. For every expert marksman or sneaky git who creeps round on your blindside, there’s some twit who can’t see that you’re right behind him. As for the goons who fire a rocket launcher at the low wall two feet in front of them, well…

Graphically, this is the best Rainbow Six 6 on the PS2, and one of the better looking Sony shooters, full stop. In itself, this isn’t really saying much. With a few notable exceptions – Time Splitters: Future Perfect, Medal of Honor: European Assault – the competition just isn’t that hot (Why, when we have God of War and Gran Turismo, we still have to put up with PS2 shooters resembling Half Life 1, I’ll never know). Still, this one genuinely does look pretty good. The character models are well-animated and reasonably detailed, and the environments have a nice, real-world grungy feel. The grinding rock soundtrack gets a little wearing, but it doesn’t intrude most of the time, and the radio-messages and sound effects are effective, even if you do feel like screaming after a few hours of “Tango, eliminated”. 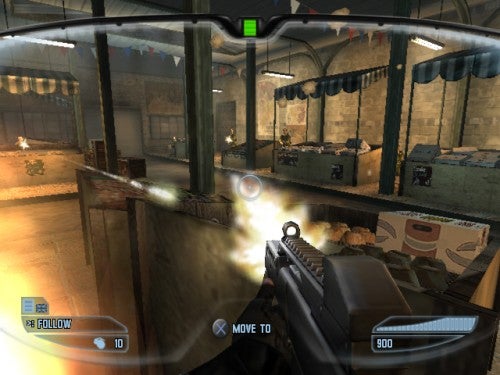 Nonetheless, there are still some good reasons to be jealous of the Xbox version. With no Live! service to fall back on, the PS2 has to do without the Xbox’s Persistent Elite Creation mode, where you can create your own operative and build a reputation online. And while recompense comes in a handful of PS2 exclusive online modes, none of these seem a huge departure from the norm. All the same, you do get a comprehensive selection of cooperative and competitive options that go beyond just “kill or be killed”, and as the PS2 isn’t exactly swimming in online tactical shooters, they should be welcomed with open arms. 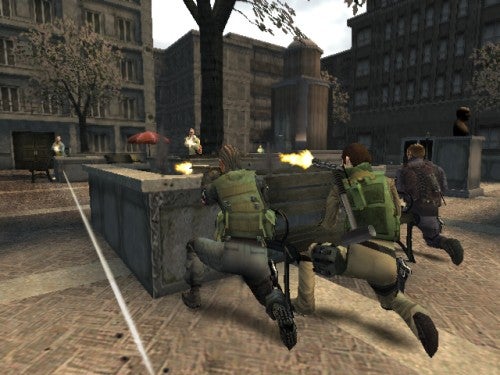 In fact, let’s embrace the positive all-round. This isn’t the best Rainbow Six on any console or the 3D shooter experience of a lifetime, but neither is it a half-baked, badly-finished version that leaves you yearning for a taste of the real thing. It looks good, it sounds good, it plays well, and if you haven’t already had your fill of this sort of thing, you’ll enjoy it. Now who can say fairer than that?


Nothing stunning, but a good fifteen hours of solid tactical-shooting fun, and more if you can use the online modes. As such things are fairly rare on PS2, you could do worse than give this one a look.