Available on Android and iOS (tested)

Ever walked into a room and completely forgotten what you went in there for? Sat down in a car to set off for a drive only to lose track of just how you change gear? Made a cake without adding any sugar? Written a review of a video game entirely in your head without actually putting any words down on paper?

The latter I’m most definitely guilty of, almost on a weekly basis. Just ask my editor. All of the above, however, are examples of getting half the job done – of setting out on the right foot only to completely miss out an incredibly important component vital to completing the task at hand. Sadly, you can add Raid Brigade to that list: an intentionally light RPG that’s packed full of items to collect, content to consume, but one with hardly any gameplay whatsoever.

Calling Raid Brigade an RPG is, in fact, something that only Kongregate’s PR department is likely to do, given that any aspects of the game that could be identified as being signature of an RPG are so feint they’re almost impossible to detect. What Raid Brigade actually feels like is a 3D hack-and-slasher dressed up is especially casual clothes in order to appeal to the kiddie market.

As the game’s name suggests, Raid Brigade charges you with raiding a series of townships, slaying the malevolent population before taking on a boss at the end of what are intentionally short stages, using any credit you amass as a result to build up your own settlement. 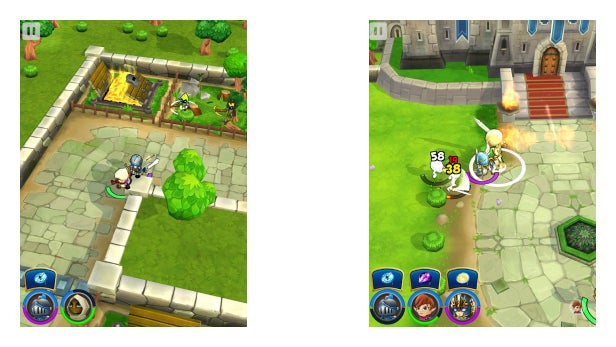 The latter element feels well implemented enough, with features that can be dropped into your own town unlocked (or bought) as you play. Where exactly you place them is up to you, and which you choose to upgrade first is also your prerogative. It’s a clever, if simple way of adding a layer of personalisation to proceedings, and along with new characters, weapons and other items that are handed out (or, again, paid for) during play, the whole thing appears to tick along nicely.

All this is designed to encourage you to build up your own base whilst also raiding other players’ homesteads at random. The more you play, the more you can upgrade your defences to survive attacks on your fortifications, though the aforementioned hack-and-slash nature of the combat itself means there’s no real way to lay out your township in any way that guarantees your base is a tough nut to crack.

Instead, success or failure simply relies on your opponent’s ability to dodge the odd attack before making their own. Any sense of strategy or tactics is essentially an illusion.

Case in point: Raid Brigade lets you send out multiple characters on every quest, each one equipped with their own skillset and weaponry. The idea is to switch between them if and when you need to in order to take down different kinds of foe, with AI controlling any other team members in battle.

As a result, however, much of the work is done for you – enemies are frequently killed by your fellow combatants before you can even get to them, and breezing through each stage to reach the boss is often no difficulty in many of the raids, whether the town you’re attacking has been designed by the developer or a fellow player; simply tapping the screen is enough to draw your weapon and swipe at the enemy, tapping at it madly and without employing any strategy enough to take out whole batches of brutes at a time. 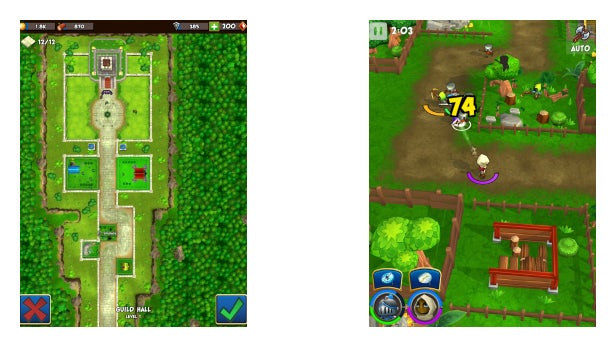 Even the bosses themselves are little more than larger versions of the rest of Raid Brigade’s foe, only offering more of a challenge because they have a weightier health count than the rest of the game’s utterly disposable NPCs.

It all means that developer Ultrabit has offered up a game you simply can’t play. It masters the modern day process of guiding players through a collect-em-all emporium where you feel like you’re moving forward simply because it ‘rewards’ you with trinkets every few minutes, but in reality it’s hard to know just what you’re playing for.

It’s the modern day equivalent of SEGA handing you a clear run of loop-the-loops on a Sonic level and then rewarding you with a stack of extra lives when you fly past the finish post simply because you were able to hold down the right button on your joypad, or EA letting you rise up the leagues in FIFA because every team you play is without a goalie. Or a defence. Or, indeed, any opposition players at all. 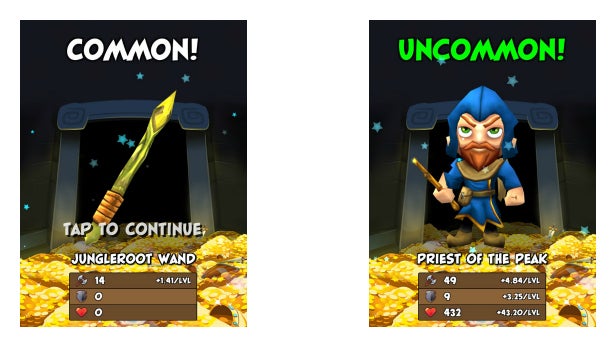 Someone somewhere within the studio should be patted on the back for designing characters that tick all the right boxes and building a world around Raid Brigade that, in theory, is packed full of content to play with. When it comes to the gameplay itself, however, Raid Brigade is a cynical exercise in keeping the player on board, handing them a map to traverse along and a display cabinet chock-a-block with items and upgrades to make them feel like they’re getting somewhere. When the game itself is missing in action, however, you have to wonder just what the point of the whole thing is.

Verdict
Inoffensive when it comes to delivery but completely devoid of actual gameplay, Raid Brigade has the structure of an engaging free-to-play adventure but it comes without the game to back it up – or any game at all, in fact. Bright and cutesy graphics and bags of content can’t hide the fact that this is an empty vessel, a ship without a crew, a king without a castle.

Somewhere along the line, developer Ultrabit forgot that its sandwich needed some meat, focusing instead on giving you the tools to play with but without a proper playground in which to use them.