Raging Justice will divide people, or so it would seem. On the one hand fans of nostalgia who long for games of old will explode with joy, whereas those with no clue what Streets Of Rage is will be utterly baffled. This, however, is exactly the point.

Developer MakinGames clearly has a love for a genre that has been forgotten and decided the modern day gaming landscape is ready for a comeback. This is where Raging Justice comes into play. Looking almost identical to those side-scrolling titles from the mid-90s, there’s a crimewave running through downtown (insert whatever city you’d like here because it doesn’t actually make a difference) and only a group of heroes can bring safety back to the streets. It’s stripped back, somewhat ridiculous and, really, a lot of fun.

The first thing you’ll notice is that it looks very nice, even though it sticks to 2D environments with only a small space to fight within on every screen. Publisher Team17 has clearly realised that visual appeal is important and spent money where it counts. That may not seem too important for a game like this, but it instantly sets the mood, wears its inspirations on its sleeve and gives you enough rope to pretend this is the much-wanted sequel to Sega’s classic. It’s all very well put together. 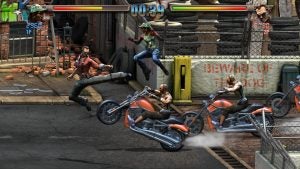 On paper, then, this is pretty straightforward: your main – and only – target really is to continually progress while kicking the hell out of every enemy that gets thrown at you. There’s more bite to it than that, however, because when you sit down to play it you soon realise it’s damn hard. Even on the default setting Raging Justice offers up a serious challenge and you’ve constantly got to be on your toes. It’s a smart decision in many ways because it adds more depth to an old template, but if you were hoping to just kick back with an easy ride you may get less out of this than you were expecting. Raging Justice doesn’t care about your lack of patience or gaming prowess.

This curve has been thought out, however, because the way you approach combat is far more varied than those classic 90s games Raging Justice reminds you of. As well as the standard ‘light’, ‘heavy’, and ‘special attacks’, it’s the ability to arrest enemies where some true ingenuity arrives. Once you’ve stunned an opponent by beating them senseless, you have two options. Finish them off and you’ll get an increase in points, but detaining them will increase your health. The latter is obviously extremely helpful to try and balance out the difficulty, but getting obsessed with your number tally will prove to be the end of you every now and then. You’ll take the risk wanting to add a few more zeroes to your score and then be killed. You’ll be mad. You’ll curse. You’ll try again. It’s a fiendishly addictive cycle.

That’s not to say that MakinGames hasn’t gone too far with this. It will all depend on what you want or enjoy, but it’s only fair to say some boss fights are beyond frustrating because they’re so tough. The idea of shattering your controller will constantly force its way into your brain, but there’s the flipside to this – succeed, and the feeling of satisfaction will probably get you through the entire day. 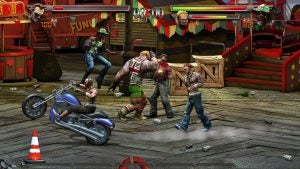 As ever there’s a few characters to choose from all of which will shift your experience slightly. It’s a case of opting for more power, more speed or a merging of the two, but it works. No one here is as iconic as the likes of Axel Stone or Blaze Fielding, but that could be a reflection of 2018 more than their design. They tick the boxes, however, which is all they needed to do. It’s the gameplay here which is the draw, and that’s more than decent.

Fighting is weighty and enemies go flying when you land a stiff blow, and it’s very good at presenting you with a rhythm that soon becomes somewhat hypnotic. Punch, kill, move forward, repeat. For some added sprinkles, you can also play the entire thing in co-op, plus there’s a ‘brawl’ mode which is basically similar to wave-based ‘horde’ modes seen in other games.

With all this in mind, Raging Justice is very entertaining, even if it is relatively simple. To assume this is a blockbuster is ignoring the vibe it gives off even by looking at the screenshots, and if you need an extra selling point, the tone may get you through the door. For example, at one point, you have to knock out a bear. 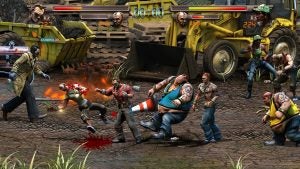 Far more joyful with a friend just because that’s always the way, Raging Justice is a solid throwback to a time that games forgot and a welcome reminder that, hopefully, it’s a concept ready to make a proper return – it still works, which is pretty impressive all things considered. If nothing else, this would be a worthy contender to kickstart an old, and missed, trend.

Raging Justice is ridiculous fun which is, at its heart, just an updated version of Streets Of Rage. It’s dumb, entertaining and well made, even if it can be horrifically hard.