Rage 2 is ultimately a letdown thanks to its lacklustre open-world and needless filler, but some of the finest FPS gameplay we've seen this year saves it and then some.

Rage 2 feels like two different games, grafted together and fighting for dominance.

On one hand, there’s a lightning fast shooter that’s up there with the best of them. On the other, there’s a sprawling open-world game that has no respect for your time or effort.

Rage 2 was the sequel no one was expecting. After all, Rage won 2010’s award for most forgettable game. Or at least it would have if anyone could remember the dull as dishwater open-world shooter.

Whatever else you want to say about Rage 2 — and I am full of opinions — you can’t say that it’s dull. The muddy palette of the original is gone, replaced instead with neon splashes of pink and blue, with explosions picked out in vivid hues and coloured smoke exploding outward as gunfire hits. There is mud. It is the apocalypse after all, but even the mud comes in a variety of colours. 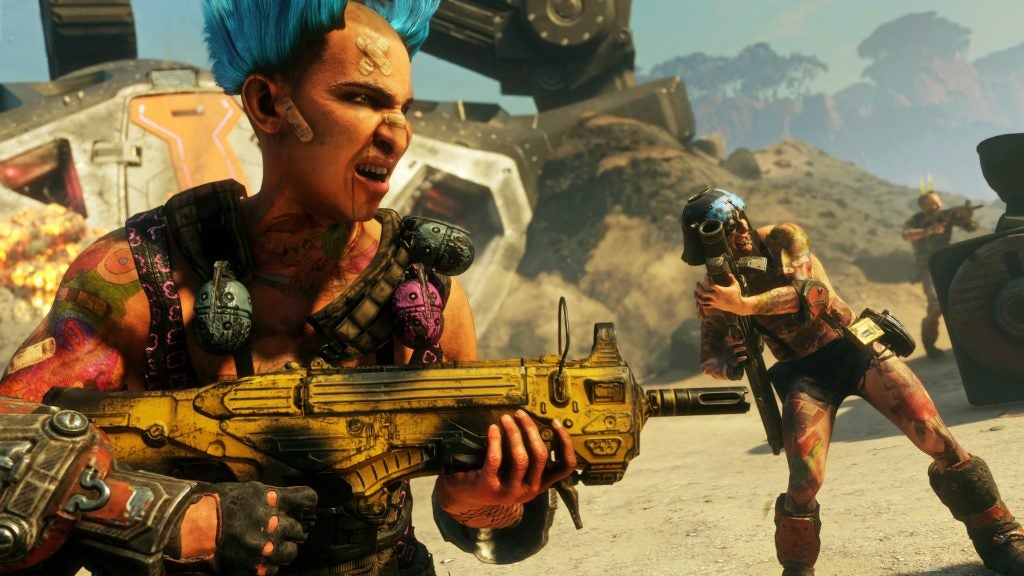 While the quality of the visuals on the PS4 copy that we tested were underwhelming, if accolades could be won by a game’s aesthetic, Rage 2 would be eagerly awaiting awards season. It doesn’t matter if the graphics aren’t super high fidelity when it all looks so good both to explore and slaughter your way through at high-speed.

The tectonic shift in visual style could be a result of Avalanche Studios taking the lead on the sequel, bringing its open-world chops to id Software’s vision. The latter  were around to oversee the shooting and make sure it’s as tight as it can be, and it shows in every skirmish.

I can’t think of any game this year that has the same flair for combat as Rage 2, and I could write a paragraph here about every single weapon in the game, but will instead settle for the shotgun, which turns enemies into grim gibs up close, but has a longer range slug that knocks people flying when you aim down the sights. And also the pistol, which should be the gun you ditch as soon as something better comes along, but mixes a devastating three-round burst every time you pull the trigger with a satisfying single shot mode that I felt every time I put a round into someone.

So how does a game with a stunning aesthetic and razor-sharp shooting come undone? Two words, separated by a hyphen. Open-world.

It may seem unfair to say that building the game into an open-world shooter is the reason for all of its failings, but you can directly trace the roots for many of its problems back to the structure. There’s the nagging feeling that Rage 2 as a tightly-paced 8 hour experience would be talked about in the same reverent tones as 2016’s DOOM or Wolfenstein: The New Order. Instead, Rage 2 has a slightly uneven feel running through it, and after doing the same activity several different times, it annoyed me to the point of resentment. 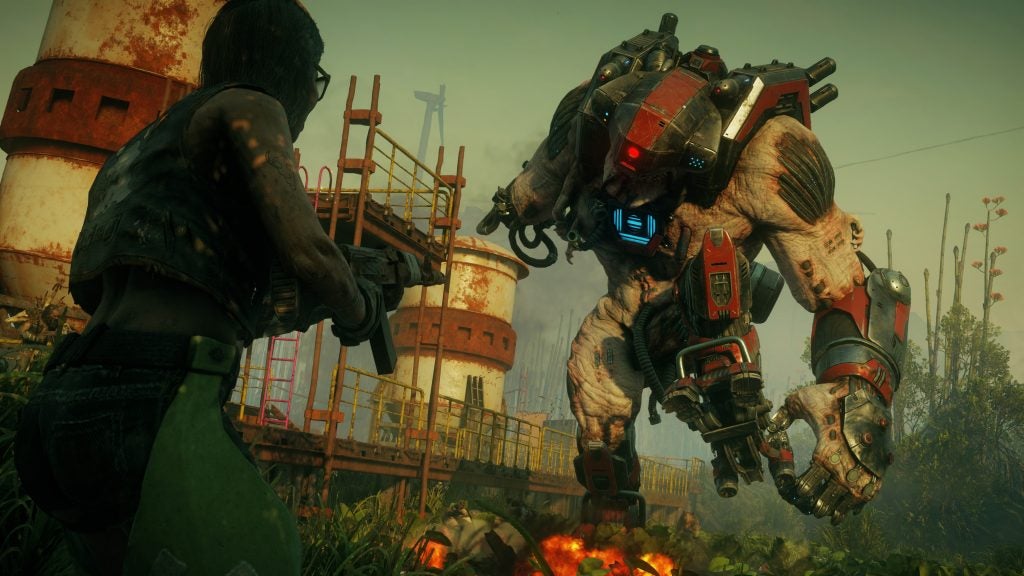 By bringing it to the open world, Rage had to introduce a bunch of collectibles to hide in every nook and cranny. You regenerate health by picking up Feltrite — seriously — except that it also doubles as a currency that you use to upgrade your weapons, gadgets and superhuman abilities.

However, Feltrite on its own only buys you the chance to spend one of several upgrade items, a different one for your weapons and gadgets, while an additional selection of player skills called Projects requires a third currency to upgrade them across three different skill trees, which you’ll need to visit three different people to unlock.

Even writing about it is exhausting, and that’s before you think about cash, but also the tertiary currency you earn in the horde-mode arena for special items. Even abilities that should be given to you from the off, whether that’s the ability to double jump, or even an interesting second-chance mechanic called the defibrillator that brings you back to life once in a while, providing you can pull off a quick time event.

Instead, these are hidden away in various Arks dotted around the map, your reward for sleuthing and exploring. The thing is, many of these moves feel integral to the combat as soon as you’ve gotten them, and the double jump in particular was giving me phantom pains until I finally unlocked it. This means the opening few hours of the game aren’t quite as satisfying as they could have been, and there’s a long middle period where you dawdle around in some poorly-handling cars to try and hoover up the bits to make the combat more fun so you can get back to the shooting. 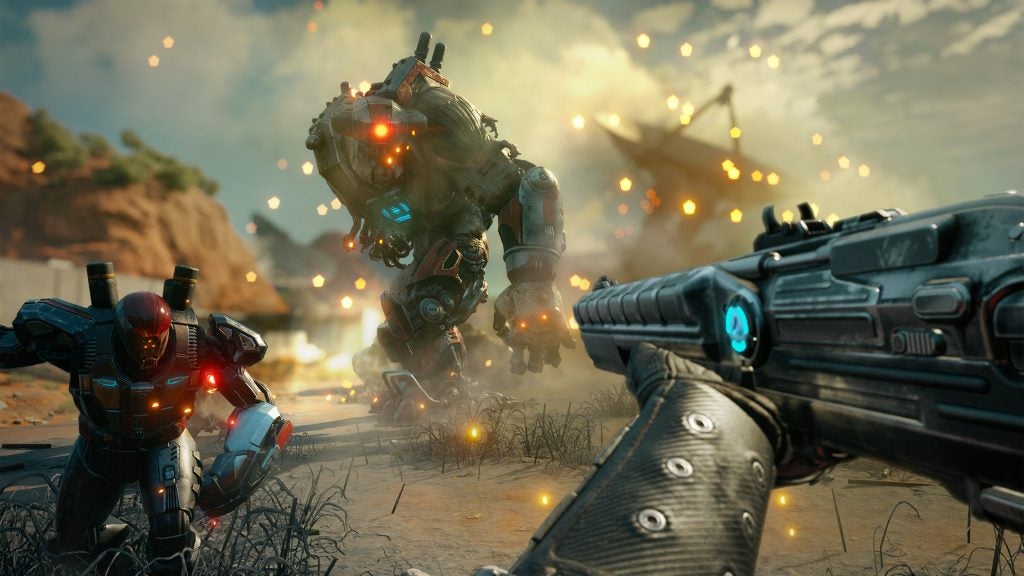 At first, the two distinct halves to Rage 2 saw me alternating tight shootouts with dreary roaming of the landscape. However, as my trips got longer and I got more powerful, I found that the time driving from place to place was hindering my enjoyment.

This isn’t the end of Rage 2. A roadmap promises new content and some further paid downloadable content. However, if the game can’t give hardened FPS players a place to get stuck into big firefights, Rage 2 is going to go down the same way as its predecessor as 2019’s most tragically forgettable game.

Rage 2 is one of the year’s most disappointing titles. However, the shooting is some of the best this generation when you’ve finally dedicated enough time to unlock different abilities and poured a couple of upgrades into one of the best shotguns in gaming.

Unfortunately, the middle chapter is full to the brim with busywork that taints the entire experience. At one stage, I was spending 10 minutes driving for a five minute firefight before getting back in a car for another 10 minute drive and a stilted vehicular combat section. Shooter fans deserve better.

In spite of this, I’m slapping 4 stars on it because, when you get stuck in, Rage 2 does the shooting part right, and better than any other FPS game I’ve seen this year.