iD Software is no ordinary developer. Time and again, it’s a company that has pushed the boundaries of graphics technology, first with Wolfenstein 3D and Doom, then Quake, Quake II, Quake III, Doom 3 and the ‘megatexture’ tech behind Quake Wars: Enemy Territory. As a result, we expect something ground-breaking from a new iD release, particularly when it’s the debut of a new graphics engine and a new IP – not to mention the company’s first major solo-developed title for over seven years.

And in many respects Rage delivers. While iD Tech 5 faces some stiff competition from the graphics tech powering Gears of War III. Crysis 2, Killzone 3, Battlefield 3 and Uncharted 3, it’s still an incredibly impressive piece of work. Rage’s post-apocalyptic landscapes are spectacularly detailed, beautifully lit and packed with truly awesome levels of clutter and debris. While the characters are clearly hand-animated, not motion-captured, they’re just as lovingly rendered. If iD Tech 5 isn’t the huge step forwards that the Doom, Quake III or Doom III engines were in there time, then it’s still responsible for one of the most sumptuous looking games on the current crop of consoles. 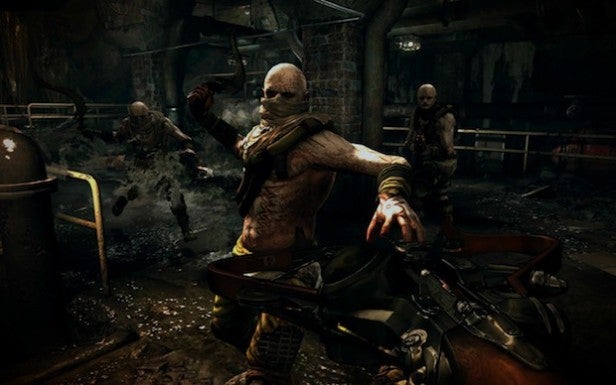 However, there’s one thing we tend to forget about iD’s games: they’ve not always been as polished as the engines. While we might look back now with rose-tinted specs on Quake and Doom 3, the former was an incoherent mess with moments of stunning grandeur, while the latter gave us such joys as a flashlight you couldn’t use while aiming weapons and the notorious monster closets – rooms and chambers which seemed to spawn hell-spawn as if from nowhere.

Now, Rage is a little different. It’s been hyped, buffed and polished for an awfully long time,  so maybe you can’t blame some critics for feeling a little underwhelmed by the finished article. However, it’s actually a better all-round game than either Quake or Doom 3, and probably the strongest single-player title iD has put out since Quake II. Sure, the storyline is a little sketchy and it’s all a bit quaint and old-fashioned, but it’s a game that’s rich in ideas, that comes based in a fascinating setting, and that boasts some of the most satisfying shooter action we’ve seen in ages. 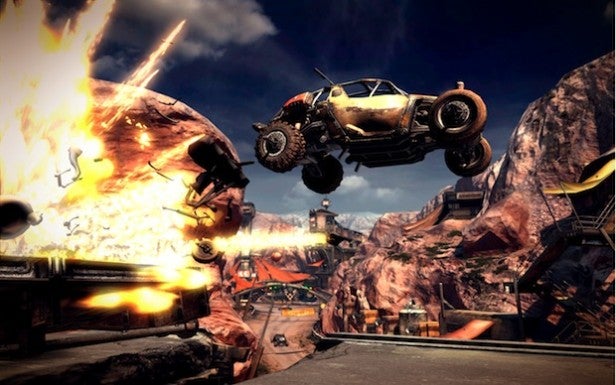 There’s no need to talk too much over the premise. You’re some kind of nano-engineered super-soldier of the future, frozen in suspended animation, then sent into orbit in an Ark-ship to ensure that humanity survives an imminent asteroid collision. Some years later you find yourself back on Earth, you’re comrades all dead and the world transformed. Your particular stretch of Earth is now a desert, populated by bandit gangs, mutants and fragile settlements and well-defended townships. Some people want to help you, more people want to kill you, and some mysterious force known as The Authority wants you captured and probably dead. It’s a strange world, mixing elements of Mad Max with hints of Cyberpunk and high-tech sci-fi, but it’s an increasingly fascinating one to explore. 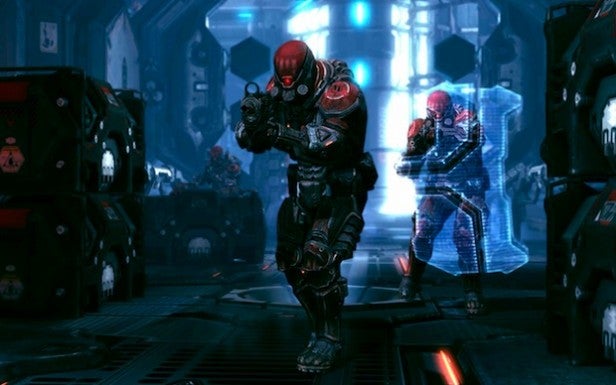 Where iD’s previous games have been linear, story-led shooters, Rage is a weird kind of hybrid. It takes place in an open world, traversed by armed buggies and quad-bikes. It has RPG elements. The characters you meet will send you on quests, and the game has simplified systems for crafting healing items, ammo types, explosives and a ton of miscellaneous equipment. Rage moonlights as a vehicle combat game and racing game, with events to win, upgrades to fit and plenty of four-wheeled bandits to blast, yet it’s at its best when it returns to iD’s shooter heritage.

The quests, it turns out, are effectively FPS levels, pushing you through fairly linear environments, blasting away at whatever bandits, mutants or monsters stand in your way. In a way, it’s very old-school. Enemies tend to have two modes – hide, pop up and shoot or rush and attack – and there’s no cover system and no CPU-controlled allies to worry about (at least most of the time). The combat is fast-paced, visceral and compelling. iD doesn’t just know every trick in the book – it invented most of them – and there’s a certain pleasure in seeing all the hoary old shooter cliches, not to mention a few new ones, trotted out for what seems like the first time in years. Whether you’re pushing your way through the mutant-haunted ruins of a long-dead city or battling through a bloodthirsty post-apocalyptic game shot, the action rarely lets up for a second. 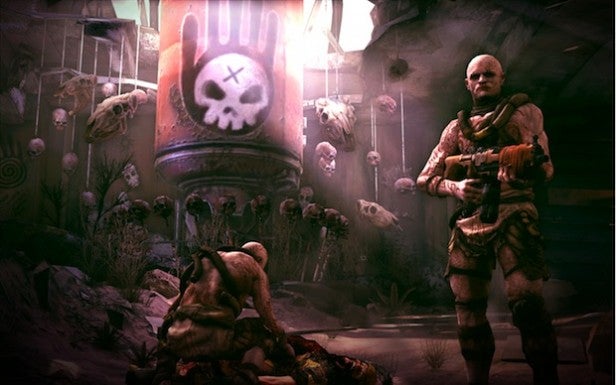 And there are some genuinely smart ideas in there. iD has kept the weapon count fairly minimal, but added interest with alternative ammo types, which can either be bought or made from scavenged items. With the aid of these a shotgun becomes a makeshift grenade launcher, or a crossbow bolt becomes a great way to slay whole groups; take electrified bolts and just add water. The weapons and ammo types make each successive battle even more entertaining, but the star of Rage is undoubtedly the wingstick. A triple-bladed smart boomerang, it can be hurled at foes with a click of a bumper, dispensing nasty decapitating or limb-severing doom to anyone in the way of the initial throw or the return. It says something for the ferocity of Rage’s combat that you’ll be relying on the wingstick fairly often; with so many mutants to slay, even your average assault rifle can’t keep up.

It’s also worth mentioning that those bandits and mutants aren’t quite as dumb as they look. Some of the rushers prove to be highly agile, springing up walls or leaping over ledges to get up close and personal a bit faster than you’d like. Rage also does a nice line in sudden bursts through ceilings and walls. Combine excellent monster design – always an iD strength – with some fine shock-horror music and the well-staged, vicious pace of the attacks, and Rage does a great job of keeping even veteran shooter fans on their toes. 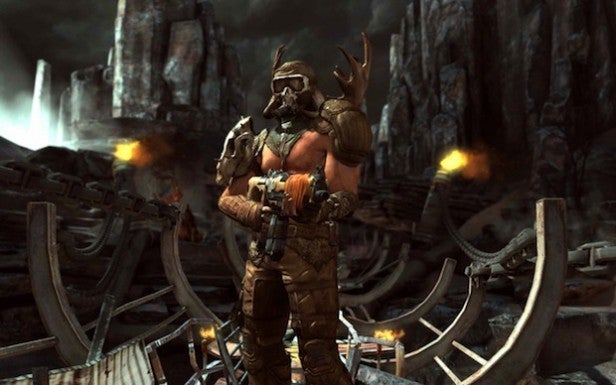 If it falls down anywhere, it’s in the open world aspects and the long-term pacing. Some of the side-missions are brilliant fun, but it’s a bit of a let down to see so many that send you back to previously-explored locales to confront a slightly different arrangement of mutants or bandits waiting for you. A handful of fetch quests feel a little cheap, and while there are useful rewards for going bandit-hunting or joining the local delivery service, actually doing so isn’t that much fun. Meanwhile, Rage suffers from a slight lack of the extraordinary set-pieces we’ve come to expect from shooters in the age of Gears of War, Resistance 3 and Modern Warfare, mistaking old-fashioned boss battles for dramatic high points. The tempo as a whole is a bit uneven, and while Rage delivers an exceptional beginning, it struggles to build towards a satisfying middle and end. It’s always very good, but just when you expect it to take things to another level, it doesn’t. 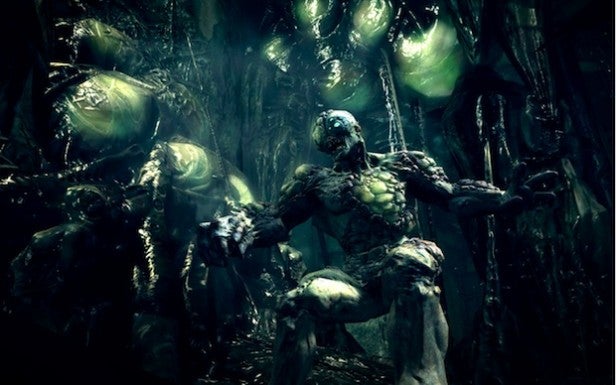 None of the above changes the fact that Rage is a hugely enjoyable shooter. Those of us who go misty-eyed over Doom and Quake II will play it happy that iD can still do what it does best, and do it better than many of its rivals. The more you explore, the more you fight and the more you play with the weapons,ammo types and equipment, the better it gets. There’s work iD could do make a Rage 2 even better, but then that’s exactly what it did before with Quake. This might not be the best or most revolutionary shooter of the year, but it’s a bloody good one, all the same.

Verdict
Rage is a strange mix of cutting-edge tech and slightly retro gameplay, combining a number of game styles that don’t always 100% work. Yet the core combat is fantastic, the world itself is absorbing and the weapons and ammo combinations just get better the longer you play. While other recent shooters have done more to up the scale or change the genre, Rage is every bit as entertaining – and a must for long-term fans of iD’s games.