There are some things which, at first glance, seem to have no real business existing. Any film starring – and I use the word in its loosest possible definition – Ashton Kutcher for instance, or as cars go, the Porsche Panamera. Even Marmite, which I’m 90 per cent sure I don’t enjoy eating, yet I still find myself compelled to.


At a glance, Radiopaq’s Custom Tuned Earphones look very much like they should be grouped into that same category. There’s no faulting the thinking behind their creation; different genres of music do indeed have different sound signatures and as such should be listened to with equipment tuned to suit. The issue is that, with four choices of earphone – Pop, Rock, Classic and Jazz – available, at £55 a go, Radiopaq is running into dangerous waters. 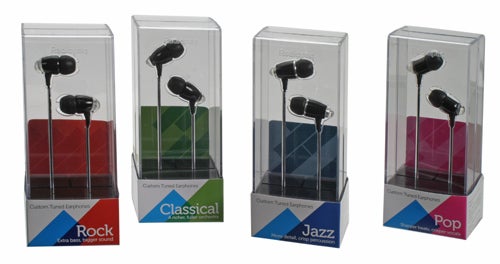 The market for decent earphones at £55 is getting crowded anyway, with the likes of the Shure SE102 and Klipsch Image S4 earphones both available for that price and offering brilliant audio quality for such relatively little money. Unless you, like I, really do only listen to Rihanna’s Umbrella and Outkast’s Hey Ya on repeat all day, you’ll want ‘phones able to do justice to more than one genre and if you’re going with Radiopaq you could, therefore, be paying up to £220 to do so if your tastes are eclectic enough.


Okay, that’s probably a little melodramatic. Radiopaq assures that despite being tweaked for a particular type of music, none of its earphones will offer a terrible experience with others. And while, yes, most of us do have multi-genre collections, it’s probably not that often Louis Armstrong, Wagner, Girls Aloud and Nirvana appear on the same playlist.


In other words, despite first appearances, there is scope to believe that Radiopaq could be onto something. At the very least we can hope that its four Custom Tuned Earphones are competent enough that should anyone be tempted to indulge, they won’t be disappointed with the purchase.

If I didn’t think they were exactly the kind of impulse-buy product I’d expect to find sitting in an electronics store, probably at an airport, I’d be more critical of the presentation-over-practicality packaging of the Custom Tuned Earphones. I kid you not to say that it took me a good 15 minutes to figure out how on earth I was supposed to separate the Rock ‘phones from their plastic surround – a challenge not helped by my refusal to simply smash the lot on the floor and hope for the best. 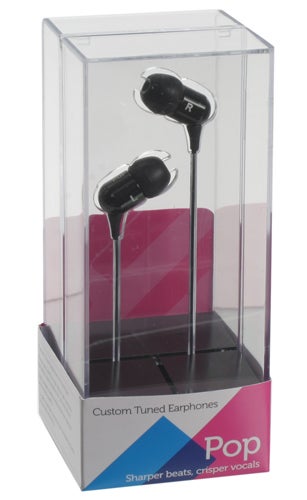 Inside, there’s less to be frustrated about. Radipaq bests both Klipsch and Shure by giving the main body of its earphones metal, rather than plastic, casings and although size varies slightly with the different genres of ‘phones, all four types are still pleasantly small and light. Conversely, all Radiopaq offers aside from the earphones is a trio of silicone tips – small, medium and large – which is a little stingy considering Klipsch and Shure also provide carrying cases to protect their products when not in use.


Each pair of earphones has its genre written on it – well, apart from the Classic set which is just embossed with “Clas” – so if you did pick up two different genre earphones there isn’t any risk of confusing the two. 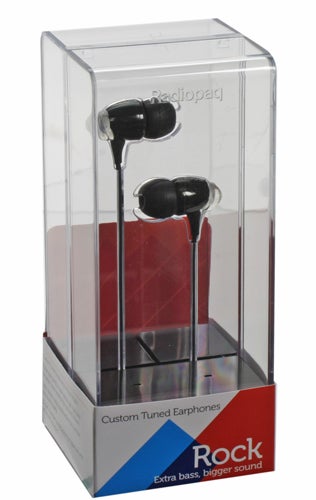 Trying out the Pop earphones with The Saturdays’ Set Me Off their claim of offering improved mid-range and vocal response versus rival earphones didn’t exactly jump out. While the audio produced is pleasantly clear, it doesn’t seem more so than rival earphones. Outkast’s Ms Jackson fared similarly, being perfectly listenable but hardly jumping out as notably improved by Radiopaq’s tuning.


Crossing genres there’s less success. Pendulum’s Propane Nightmares, while not bad as such, sounded notably better on the S4s and SE102s and the Pop tuning definitely didn’t do any favours to Tchaikovsky’s symphony No. 4 in F minor.

To my ears Radiopaq’s Rock earphones have a more amenable tuning. The frequency response is – supposedly – tuned to offer better response both low down and at the top end, with reduced distortion. You’d have to be mad not to notice there’s definitely plenty of bass, although thankfully not quite to the point of being overwhelming. 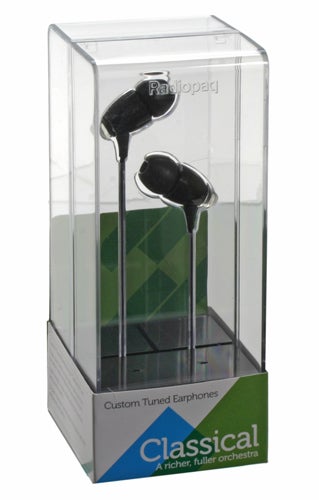 Vocals, such as Matt Bellamy’s on Muse’s In Your World or Freddy Mercury’s on Queen’s Don’t Stop Me Now, stand out. Occasionally this vocal presence can come at the expense of seeming a little out of the mix. If I was feeling harsh I might say Radiopaq had over-tuned its Rock earphones, but it’s not quite frequent enough an issue to annoy.


I was less convinced by the reproduction of Frank Sinatra’s I’ve Got You Under My Skin and Tchaikovsky’s 4th didn’t sound much better on the Rock ‘phones than the Pop, coming across tainted and unbalanced.


Inevitably, testing the Classical earphones required breaking out the Wagner to pleasing results. Gotterdammerung and, of course, Die Walkure were both presented in a perfectly pleasant, balanced and precise manner. Lower-pitched brass and strings might benefit from a touch more bass, as was also evidenced in Beethoven’s Ninth. The overall balance of the Classical earphones is definitely the most genre-specific, too, with anything not comprised of a large variety of sounds coming across flat and lacking presence. 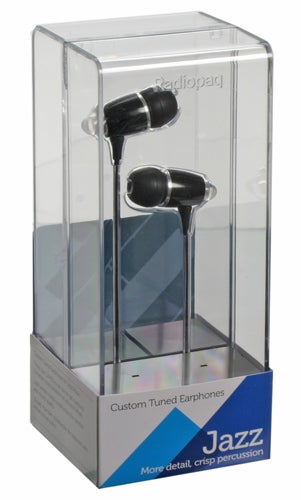 The Jazz earphones are a perfect excuse to give my Louis Armstrong collection a much-overdue airing and it was worth the effort. Radiopaq claims its tuning here offers detail, range and balance and I’m happy to agree with that – Mac the Knife and What a Wonderful World were pumped out with due aplomb. Moving on to Robbie Williams’ surprisingly brilliant version of Jerry Jeff Walker’s ”Mr. Bojangles” and there’s little to complain about with strings, brass and, of course Williams’ vocals all sounding bright and warm. I think the Jazz earphones are the best with other music, too. Bass is perhaps a tad lacking for some rock or pop tracks, but classical music doesn’t sound any worse with the Jazz than the Classical earphones (and vice versa it should be said).


For their price, the audio quality isn’t bad on any of the Custom Tuned Earphones; with the genre of music they’re tailored to. However, despite what Radiopaq says none of the earphones are particularly great if you want to listen to music for which they aren’t tweaked for, while rival products, such as the Shure SE102 or Klipsch Image S4 earphones sound better across a broad range of genres.