Let’s kick off with a big, bold statement: Quantum of Solace is the best Bond video game since Goldeneye.


Unfortunately, we have to follow that statement with a fairly whacking ‘however’. Saying that Quantum of Solace is the best Bond video game since Goldeneye is a bit like suggesting that the new Snow Patrol album is the band’s best yet. Given the often miserable quality of the preceding material, it doesn’t actually mean that it’s necessarily all that good. With Quantum of Solace, the team at Treyarch hasn’t made as wretched a game as Goldeneye: Rogue Agent or Agent Under Fire, but neither is this the strongest or most imaginative action game you’ll play this season. In a nutshell, Quantum of Solace is a solid but slightly dated FPS with a few interesting Bond elements. It’s roughly enjoyable, but anyone expecting Treyarch to do for the Bond games what Daniel Craig has done for the movies will go away feeling slightly let down. 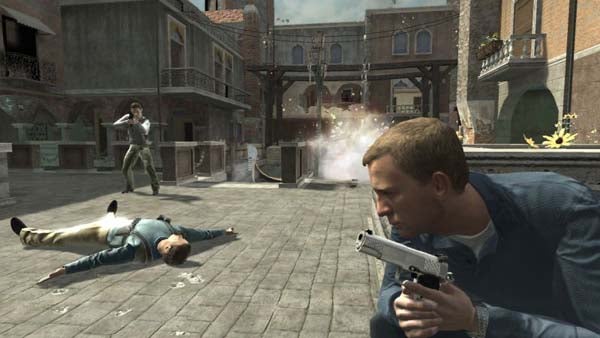 The fundamentals aren’t bad at all. Treyarch – the developer behind the new Call of Duty: World at War – has been able to base its Bond game on the established CoD4 engine. We’ve already seen what this can do when pushed and those familiar with the tried and trusted Call of Duty control scheme will have an immediate head start in Quantum of Solace – you’ll already have the ‘left-trigger aim, right-trigger fire’ drill down pat . There are some changes, however. With the focus on Bond and Bond alone, the AI squad mates and cover and advance mechanics that lie at the heart of Call of Duty are no more. Instead, Quantum of Solace is all about cover, with a neat Gears of War/Uncharted style system that snaps you instantly from a standard FPS view to a close third-person view of a digital Daniel Craig ducking for dear life. You can switch from cover to cover using deft taps of the A button, vault over with Y and even dash for safety while running by targetting a suitable spot and holding down A. And while in cover, you target enemies then press the left trigger to pop out and the right trigger to blast. The health system works in much the same way as in Call of Duty 2 to 4, giving Bond a certain air of invincibility, but only if you sensibly retreat when necessary. This is Craig, not Brosnan, after all. 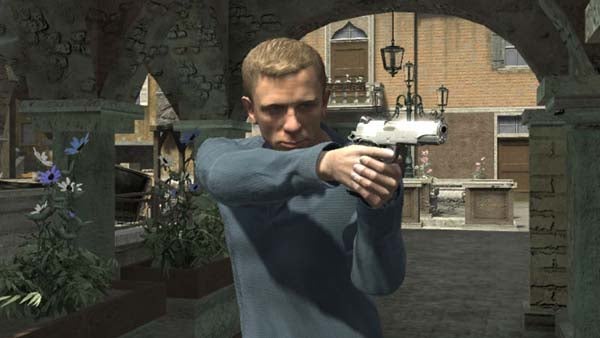 Cunningly, the game doesn’t rely on the new Bond film entirely. With the plots of Casino Royale and its sequel so closely tied together and no existing game of the first Craig Bond film, Treyarch has been allowed to integrate sequences based on the former into a storyline based on the new movie. Note, however, that when I say ‘based’ I mean ‘based on the bizarre fantasies of a drunken gun nut who watched Casino Royale on the same night as John Woo’s Hard Boiled and got the two mixed up.’ Every conceivable scene in Casino Royale has been ‘enhanced’ by the addition of twenty to ninety armed bodyguards, masked terrorists, corrupt army goons, elite mercenaries, drug smugglers and exploding helicopters. Remember the scene where Bond destroys a science museum in Florida while tackling a terrorist and his mercenary army? How about the one where he spices up a dull train journey with England’s most ridiculously gorgeous civil servant (shame about that accent – ed.) to gun down a small army and disrupt a drugs shipment? Or what about the bit where he fills the hotel swimming pool with corpses before setting most of the ballroom ablaze in a series of violent explosions? What? None of these ring a bell? Surely not. Am I to suppose that similar liberties have been taken with the plot of the new movie? 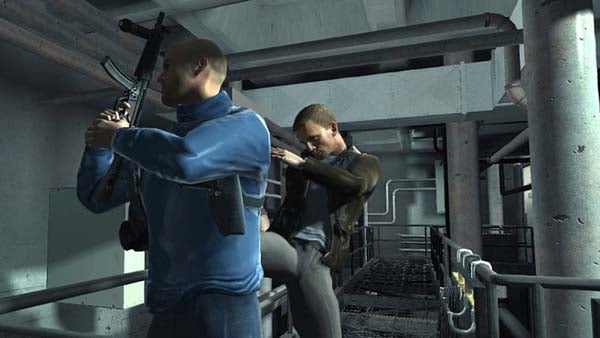 Still, Treyarch has realised that a Bond game shouldn’t all be about mindless blasting – it needs a share of stealth and hand to hand combat too. Several missions feature security cameras to avoid or destroy (instantly winning familiarity points with fans of a certain N64 classic) and a handful include sections where sneaking around and using the silenced pistol will give you a much easier time than the standard run and gun approach. Sneaking up behind a terrorist, henchman, etc. will also give you the chance to use a takedown maneuver, as will racing towards a target with the left analogue stick pressed in. 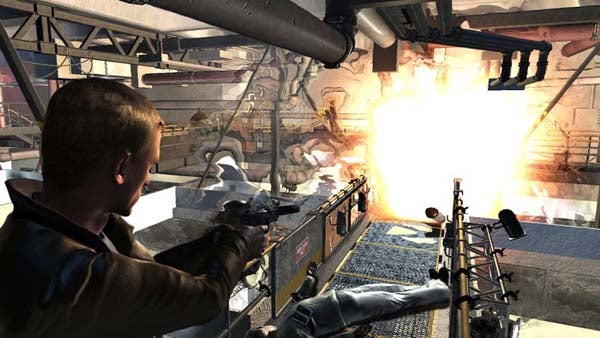 Sadly, hand to hand combat is handled through the medium of quick time event sequences, but I guess it’s a way of capturing the gritty, unpredictable style of the fights in the films, and these examples are at least pitifully easy. Not once while playing Quantum of Solace did I lose a scrap due to hard to see prompts or overly draconian time limits. Phew. There’s also room for a spot of hacking (automated) and door unlocking (a simple press when prompted puzzle sequence) to make you feel like a modern secret agent, not to mention a spirited recreation of the poisoned drinks sequence from Casino Royale (anyone who has ever tried to leave a nightclub while drunk will find this oddly familiar). 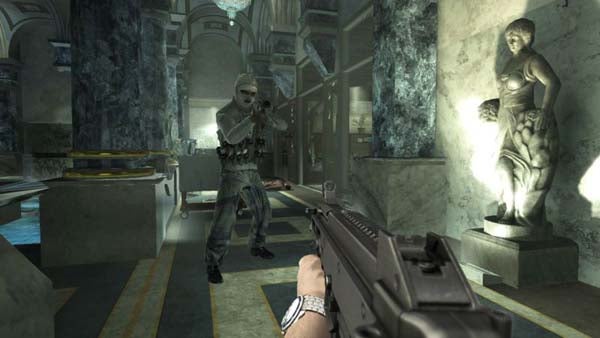 Still, if the core of the game is gun fights – and it is – then at least these are handled in some style. You get a huge variety of weapons, most of them satisfyingly meaty, and while your enemies won’t win any prizes for intelligence or squad tactics – even the so-called ‘Elite forces’ – they do make some attempt to move from cover to cover and outflank you. If all you wanted from a game was a series of vaguely exciting confrontations with multiple, well-armed opponents, spiced up by the odd set piece or spot of sneaking, then Quantum of Solace would probably leave you feeling sated.


The problem is that that is really all it does. I can’t say that Quantum of Solace is monotonous or grinding in the way that Army of Two or Fracture are, but neither does it have the intense pacing or powerful moments of a Call of Duty 4 or Crysis: Warhead. The levels are well constructed but incredibly linear, and it’s ridiculous to see how many locked doors, implausible barriers and pitifully obvious triggered events we’re expected to put up with in an FPS in this day and age. See, Bond can’t leap over that waist high barrier because it has a crack in it. That one? Not on your Nelly. Quantum of Solace wasn’t designed to leave you room to think or improvise. It was simply designed to funnel you from one encounter to the next. 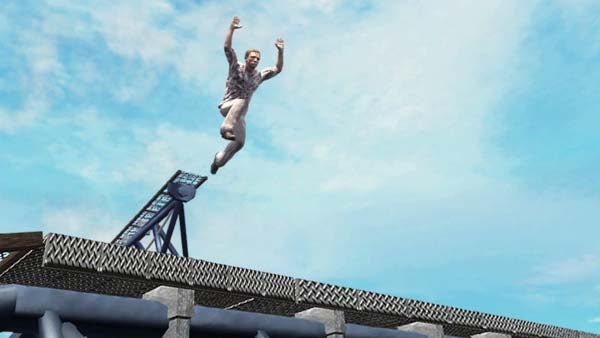 This isn’t the end of the world, but throughout Quantum of Solace I found myself wondering how different this game could have been had Treyarch not just decided to do a heavily customised, Bond mod of Call of Duty 4, but had looked at other games for inspiration. Splinter Cell: Double Agent had a better take on espionage. Glimpses of Mirror’s Edge could have given the team some new ideas on how to integrate platform elements into a first-person game. If you’re going to mess about with the plot, why not open up the environment? One thing we all loved about Goldeneye was the way in which it allowed you to fully explore the film’s locations. Why not take this to a new level on a generation of consoles with the power to really do it?

Of course, it should also be said that it’s no good having that power if you’re not always sure how to use it. There are moments where Quantum of Solace looks fantastic – the character models look believable, the environments and lighting mesh together and the scenery packs in plenty of detail. There are also, however, a lot of moments where you feel like you’re looking at a first generation 360 game; times when wishy-washy textures, poor animation and boxy, uninspired environments spoil the party. And what on Earth have they done to Daniel Craig? I know he’s not supposed to be the tallest chap around, but in some sequences Bond looks like a weird little goblin in a Daniel Craig rubber mask. Come on Treyarch, did the twits from DanielCraigisNotBond.com put you up to this? Still, the music is – as you might expect – excellent and the voice work from Daniel Craig, Dame Judi Dench and others helps give the game a slightly more convincing Bond feel. 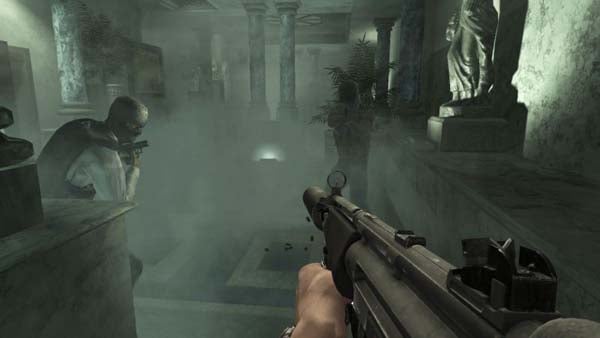 All in all, I’d say that Quantum of Solace is one for rental only were it not for one thing: the multiplayer game. It helps that the feel is sort of CoD4 lite, but the game has a few interesting game modes all its own. You’ll be familiar with the usual deathmatch, team deathmatch and control point options, all reworked in an ‘Organisation vs Mi6’ style, but Quantum of Solace also throws in Bond Versus, where one player plays Bond as a kind of one-man Counter-Strike team while all the other players try to eliminate him, Bond Extraction, where the Mi6 team helps Bond escape from the map, and Golden Gun – a variation on the classic Goldeneye play style. Here players vie over one super weapon, the catch being that the wielder of the Golden Gun instantly becomes visible on everyone’s radar. It’s a lot of fun, and while the odds in the Bond Versus mode at first seem heavily weighted against the player in the Daniel Craig skin, you can be surprised. With a Bond player who sneaks and snipes effectively, Bond Versus can be a real thriller. If nothing else, it’s a great test for the hardcore FPS player who feels they can wipe the floor with anyone and everyone. 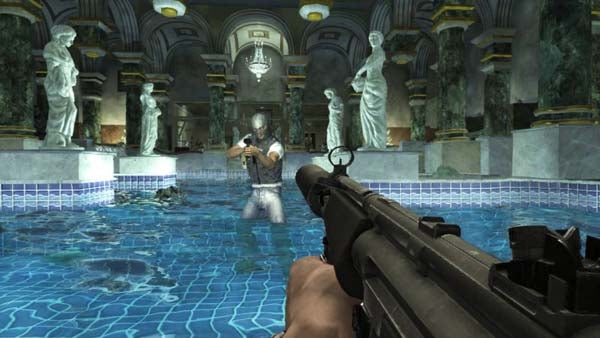 On the downside, the multiplayer mode does feature some of the ugliest maps I’ve seen in a commercial FPS game for some time (did anyone really think the Barge level looked acceptable?) and the animation of the Mi6 agents and Organisation troops is really weird at times. Why are they all doing the same camped-up imitation of a Thunderbirds puppet? Still, multiplayer Quantum of Solace is entertaining. Whether there’s really room for it in with Gears of War 2, Resistance 2 and Call of Duty: World at War imminent remains to be seen.


Still, it’s enough to give Quantum of Solace a slight boost. By no means is this a bad game, but given the riches pouring down on us at the moment you’d have to be Bond mad to justify buying it. Millions of people, caught up in Bond hysteria or just looking for a game with a recognisable name will probably do just that and come away feeling reasonably happy, but if you already know your Call of Duty from your Gears of War then there are better ways to spend your money right now.


Quantum of Solace is a solid but slightly old-fashioned FPS that doesn’t do as much as it might with the Bond material. Entertaining, but rather unimpressive.