One of the most important issues facing any business, large or small, is ensuring all mission-critical data is kept safe and up to date. Whether it’s financial records, product designs, research results, or just copies of product reviews, having an infrastructure that will enable the business to get back up and running in a short time, even after massive data loss has been incurred could mean the difference between success and failure for the business.


Unfortunately, traditional tape-based backup solutions are far from ideal, especially for a small business without a dedicated IT department or for the self-employed. The problem with tapes is they are slow to write to, so backups always take a long time, and they need to be changed everyday, which can be a real inconvenience for an individual. Also, because tapes store data linearly, you need to fast forward or rewind them to access specific data, which also makes recovering data slow. 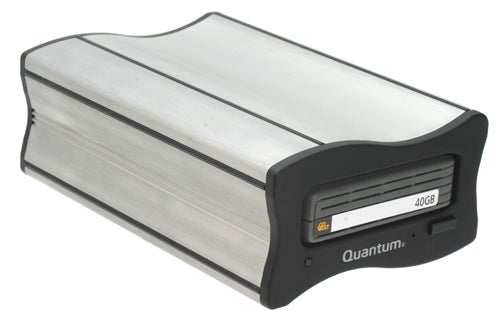 With the GoVault, then, Quantum is aiming to eliminate a number of the traditional problems with existing backup solutions and provide the user with a fast, easy-to-use, yet robust system. The key to this is, instead of using tape, the GoVault employs a notebook-sized (2.5in) hard drive encased in a cartridge to store data. These cartridges can be swapped out just as quickly and easily as a tape but unlike tapes, they don’t need to be changed everyday, they are fast to write to and, perhaps most importantly, can be randomly accessed so data recovery is potentially orders of magnitude faster than tape storage.


The GoVault system is available in two types; the internal version which sits in the 5.25in drive bay of a PC and interfaces over SATA, and the external one, which has an external caddy and interfaces over USB 2.0. There are obvious compromises between both versions, with the USB interface of the external drive making it slow and the lack of portability of the internal one limiting its uses, but at least there’s a choice. Maybe an external version that also has an eSATA interface could be developed, and then you’d have both the speed of SATA with the convenience of a portable unit. Regardless, it’s the external one that we’re reviewing, so let’s see how it fares. 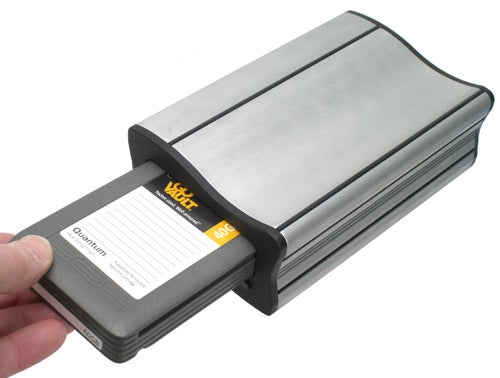 The caddy is particularly striking as it looks like it’s been made to military spec rather than for the relatively mundane life of a normal office. The wavy aluminium outer skin is incredibly strong, exhibiting no flex or buckling no matter how much we manhandled it. Indeed, a couple a bashes with some heavy metal objects (no, not leather trousers and pointy guitars) and a few accidently-on-purpose falls from our test beds proved it to be strong enough for even the clumsiest IT admin. If all that isn’t enough, though, there are also a couple of strips of rubber that run the length of the drive on the top and bottom to help keep it secure on your desk.

The front houses the cartridge slot, which is covered by a spring loaded door. There’s also an activity indicator LED, an emergency eject hole, and the regular electronic eject button. Round the back things are even more sparse with just a couple of sockets for the mini-USB data connection and co-axial power, though these are sunken deep into the chassis to help ensure the sockets aren’t damaged if the caddy takes a tumble. 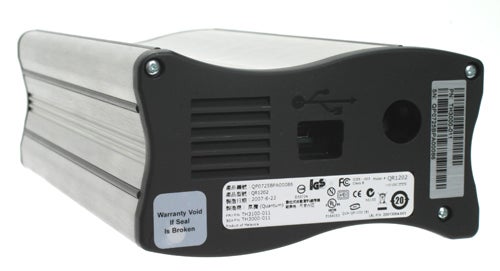 The cartridge itself is essentially just a hard drive in a protective plastic coat but there are a couple of additions. On the back is something that’s essential; a red plastic slider for switching between read only and read/write mode so you can ensure data isn’t accidently lost. Also, a ridge down one side corresponds with a bump inside the caddy that together ensure you can never insert the cartridge the wrong way – something that could potentially cause damage.


The most important aspect, though, that is the drive is able to survive drops of up to a metre, or at least it’s supposed to. We tested this aspect by dropping the one we had a couple of times from desk height onto our carpeted floor and found the drive completely failed to respond afterwards – it wouldn’t even eject from the caddy until we forced it using the pinhole eject. This was a bit of a catastrophic problem.


We called Quantum about this and the response was one of complete surprise. In fact, they were so concerned they insisted we send the broken cartridge back for testing at their labs. In the mean time they sent us out a replacement and we continued our testing.

This time we started off even smaller, working our way up from 2 x 20cm drops all the way up to 2 x 100cm drops, in 20cm increments, and tested the drive between each pair of drops. This time around the cartridge worked perfectly everytime, so it’s fair to assume the first sample we received may have been faulty – especially as it wasn’t a brand new cartridge but one that may have done the rounds a bit.


Plugging in the GoVault without installing the software enables you to use it just like any other removable storage device so you can drag and drop files to and from it and swap cartridges as and when you like. Indeed, taking this into account, we decided to run the GoVault through our usual file transfer tests that we use for testing all storage devices. These involve simply copying a 1.07GB video file from the hard drive of our test bed to the GoVault and timing how long it takes. We then copy the file back and time it again. Finally, we repeat the process with a folder containing 1,943 image files, which total 497MB.

As you can see, the GoVault (or at least the 40GB version) is no speed demon and it lagged well behind some other drives we’ve tested. However, this is still considerably faster than any tape system would be. 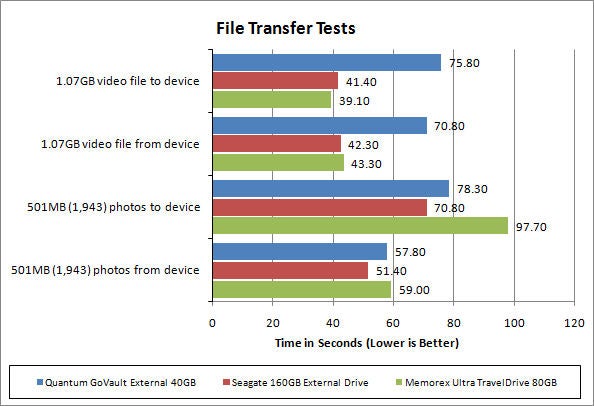 If you want to take advantage of the GoVault’s more advanced features, including the backup utility, you must install the included Data Protection software. This neat software enables you to specify multiple backups, or Protection Plans as Quantum would have us call them, as well as manage cartridges and view a calendar of your backups.


Backup options include backing up everything, just your documents, or whatever individual items you choose. They can then be scheduled to run daily, weekly, monthly, at system startup, or pretty much whenever you like. There are also options that take into account power management settings or only start the backup when the computer has been idle for a certain amount of time and you can even assign certain backups to only run on specific cartridges. In short, this software had everything we could conceive a person needing for managing a comprehensive backup schedule.


One of the key benefits of the GoVault cartridge based system is that backups can be stored incrementally on the same cartridge. So, after the first backup, only data that has changed will be stored on the next run. This means you can change the cartridge on a Sunday, say, and run the initial full backup while everyone is out the office (assuming their PCs are on) then throughout the rest of the week you just run incremental backups on the same cartridge. Ok, this probably isn’t the most secure backup policy but it’s better than nothing and it’s far more convenient than changing tapes everyday. 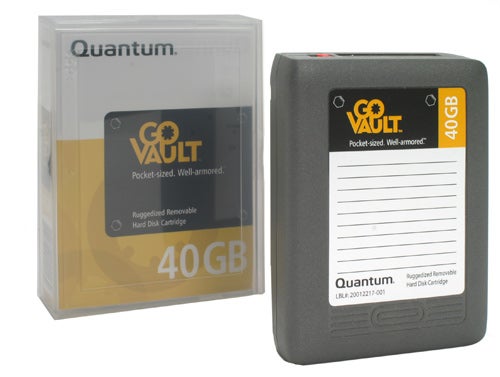 We tested this by creating a Protection Plan that contained our transfer test files then ran the backup. The first run took approximately nine minutes to backup the 1.55GB of data. Leaving the files unchanged, we then ran the backup again and this time the process took less than ten seconds. I think it’s fair to say the results speak for themselves.


The price listed at the top of this review is for the external GoVault caddy with one 40GB cartridge, which considering you can get 300GB external hard drives for around £100, seems very expensive. Indeed, additional 40GB cartridges are around £55 and the range topping 160GB cartridges cost a whopping £175. So, there’s no doubting the level of usability and protection that GoVault provides comes at a high price. However, when you consider equivalent tape storage solutions demand similarly high prices yet can’t claim the same ease of use, you realise that it’s not so expensive after all.


The Quantum GoVault Data Protector system is an incredibly easy to use and convenient alternative to more traditional tape based backup solutions, which makes it just perfect for the smaller business or individual. Add to that the fact both the caddy and cartridges are tough enough to survive the daily rigours of working in even the busiest of IT departments and you have a pretty compelling solution. The only worrying factor is cost, as these don’t come cheap, but in comparison to the huge potential financial and emotional costs that can come from data loss, £200 is a small price to pay. 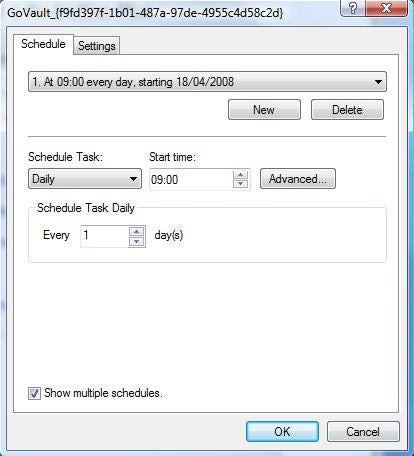 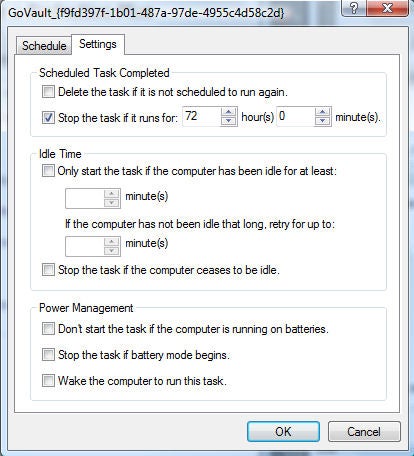